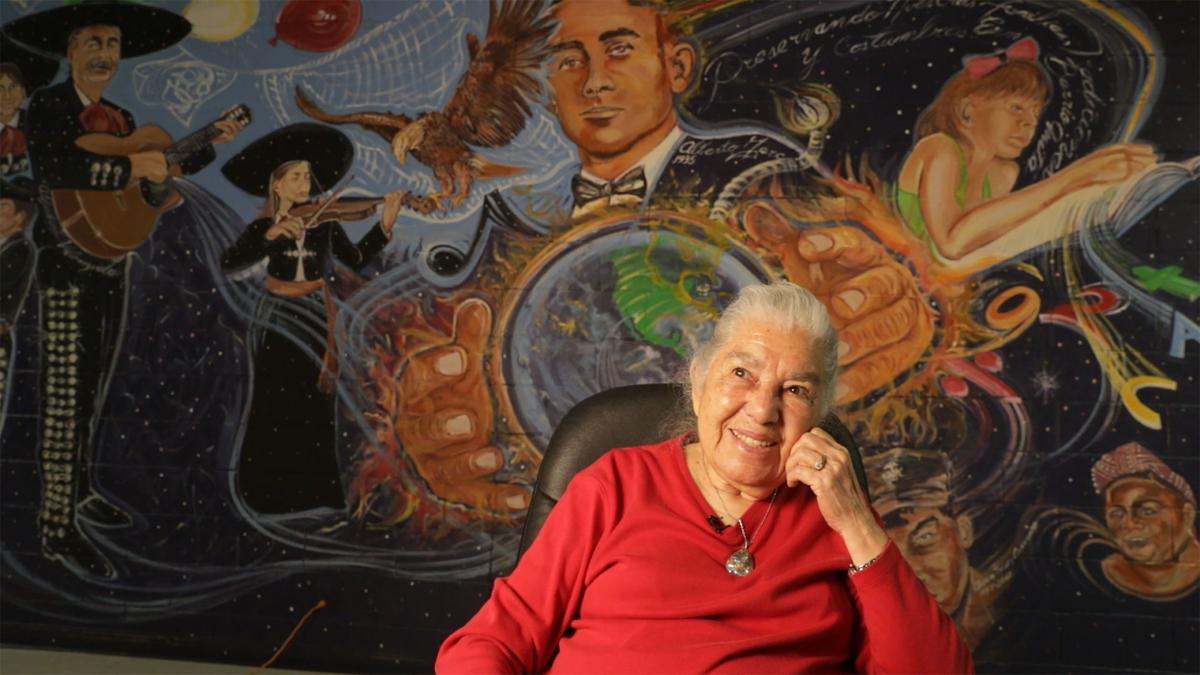 Sarah Garcia is among the Barrio Anita residents whose stories are included in the video about the neighborhood. 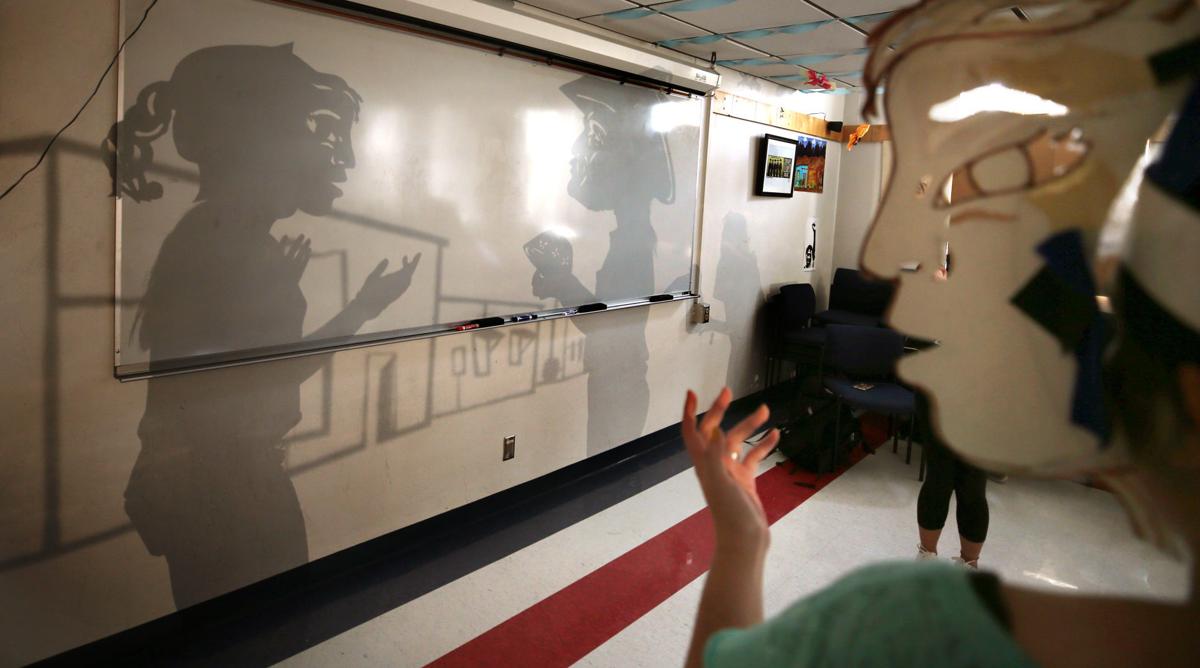 The masks worn by Victoria Pereira, left, and Paulina Carrillo cast the shadow of a young girls and a man, two of the characters in the shadow theater segment of Barrio Stories, tales gathered from Barrio Anita and produced by Borderlands Theatre, Friday, April 6, 2018, Tucson, Ariz. 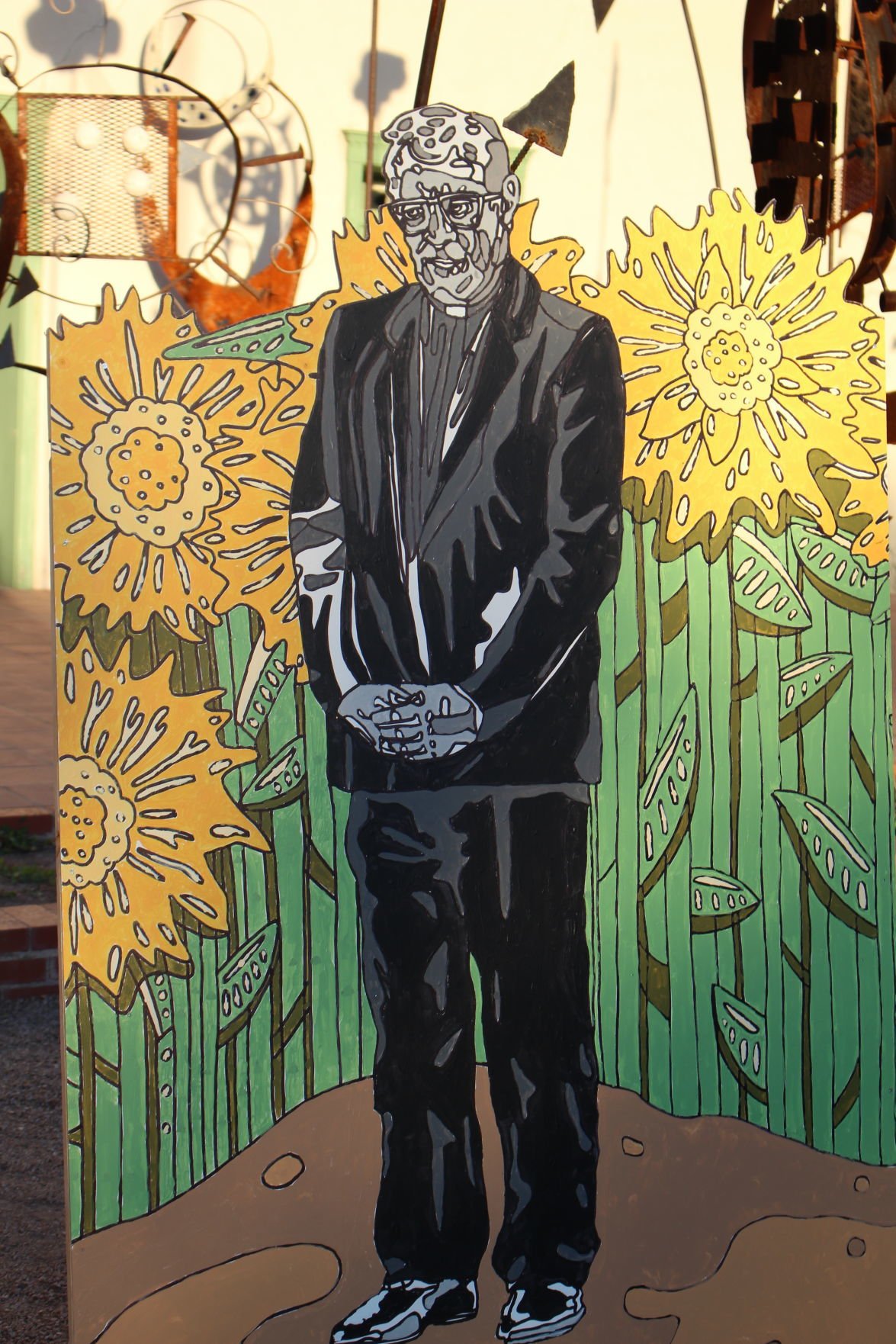 Barrio Anita is a little sliver of a neighborhood.

But it is big with history, culture and people who grew up there, swimming in the now-gone community pool, going to school, mingling with neighbors and playing in the streets.

Those people, their memories, culture and history, will be celebrated with Borderlands Theater’s two-day artcentric event “Barrio Stories in Barrio Anita,” slated for this weekend.

And, once again, Borderlands is taking it to the streets, eschewing a traditional stage for outside spaces in the neighborhood.

Two years ago, the company took over the grounds of the Tucson Convention Center to evoke Barrio Libre, which was torn down in the 1970s to make way for the TCC.

At the heart of the event were the stories collected from former residents, which were transformed into plays and poetry. For two days, music rang out over the TCC, children played and art was the medicine used to help lessen some of the scars that the destruction caused.

“Barrio Stories in Barrio Anita” has followed the same model: The history and stories of those who have lived and still live there are what have informed the creation of videos, poetry, murals and theater. It is what is behind the music, the audio tours and the backyard fiesta.

There will be a lot to see at the nighttime festivities.

“At all times, there are four to six things happening,” says Marc David Pinate, Borderlands producing director and the director of the event, which will spread out over about three blocks of the neighborhood.

“The point is not to see every single thing,” he continues. “Just like life, you are going to make some choices and you’ll get a journey. We feel, regardless of what you see or don’t see, you’ll get a better understanding of the history and the kinds of people who made this community and the spirit of the people who lived and live there.”

“I’m super excited,” says Miguel Garcia with Barrio Anita’s Oury Recreation Center, which was originally built in the 1930s as a meeting place for the neighborhood. “And the neighbors are loving it.”

Garcia found dusty boxes at the center that contained a goldmine of photos dating back to the building’s early days. Many of those have been incorporated into the videos of residents pulling up memories of life in Barrio Anita. Those videos, what Pinate calls the heart of the event, will be shown on big screens in an empty lot between Davis Bilingual Elementary School and the Oury Center.

Ramon Olivas is one of those on the video talking about his life in Barrio Anita.

While he grew up in nearby Barrio Hollywood, his grandmother lived in Barrio Anita, where he, too, now lives.

“I was back and forth all my life,” he says. “Growing up, the people were so nice and kind. We were like one big family.”

Garcia thinks the videos will have an impact.

“At one of our meetings, Borderlands came in with a sneak peek of the videos,” he says.

“A lot of the elders came back to attend the meeting and they started reminiscing. … Oh, the memories that came back. It was awesome.”

Before Borderlands started the project, a door-to-door survey asking residents what they wanted in their neighborhood was conducted.

“The number-one comment we got is they wanted to know their neighbors better,” says Pinate.

That informed the whole event, which will have echoes of the backyard parties that use to frequent Barrio Anita and the mariachi music that wafted out of Davis Elementary, now Davis Bilingual, which had the city’s first after-school mariachi program. (Artist Luis Mena is also on the video. A vivid memory for him is that the school forbade Spanish, his sole language when he started school. A favorite teacher used art to help him learn English.)

It will also have youth poets roaming throughout the area, reciting poems that were inspired by Barrio Anita’s history, stories from residents acted out in a shadow theater production, ballet folklorico performed by Davis students and audio tours of the neighborhood.

Every step of the way, Pinate and his collaborating artists have worked with residents, both young and old.

“Our hope is, along with educating the general public and instilling a sense of pride in the neighborhood, that the actual residents themselves are inspired and motivated to preserve their heritage,” says Pinate.

“At a minimum, that they get to know their neighbors better and take an active part in the maintenance and development of the neighborhood.”

“Barrio Anita has a lot of rich history, culture and tradition,” says Olivas.

“I’m glad Borderlands is doing the project to bring us back together as neighbors.”

Where: Barrio Anita, between North Grande Avenue on the east, I-10 on the west, West St. Mary’s Road on the south, and West Oury Street on the north. See the map for specific sites.

Cost: Free, but donations are accepted.

Tips: Bring a flashlight; stop by one of the two headquarters for a map and program.

There will be simultaneous activities all over the three-block area of the event.

Barrio Anita was first developed in 1902 by Thomas Hughes Sr., the brother of Sam Hughes, who helped incorporate the city in the 1870s. The subdivision was called McKinley Park

Hughes was living with his sister Annie, who moved in to help him raise his nine children after his wife died. When he developed McKinley Park, he named the main street Annie Ave., after his sister.

It wasn’t long before everyone started calling it Anita Avenue.

When Thomas Hughes died in 1907, his brother Sam re-recorded the subdivision and changed the name of Annie Avenue to Anita Avenue.

The neighborhood is bordered by West Speedway on the north, I-10 on the west, St. Mary’s Road on the South, and North Grande Avenue on the east.

How Barrio Stories in Barrio Anita got launched

Borderlands Theater’s Barrio Stories project aims to celebrate and honor Tucson’s historic Mexican American barrios. The idea is so compelling that the company was invited to participate in the Arizona Commission on the Arts’ Creative Communities Institute. Through that, Borderlands’ Marc David Pinate and his collaborators have been mentored by local and national experts as the Barrio Anita event was planned.

“It gave us the ability to stop and focus on this (project),” says Pinate. “That’s part of how we’ve been able to figure out the logistics. The goal of the (Creative Communities Institute), which is our goal, is that while we are putting forth a high-caliber, artistic experience, we want to make a community impact, too.”

Britney Spears slams documentaries about her life as 'hypocritical'

Britney Spears slams documentaries about her life as 'hypocritical'

Opinion: What 'Coco' can teach us about dementia

Cases of dementia among Latinos are projected to grow to 3.5 million by 2060 and cost the economy a cumulative $2.3 trillion.

The University of Arizona Marching Band will kick off this year's celebration.

Green sets the bar high in the arena of multi-instrumentalists.

“Tis the times’ plague, when madmen lead the blind.”

Sarah Garcia is among the Barrio Anita residents whose stories are included in the video about the neighborhood. 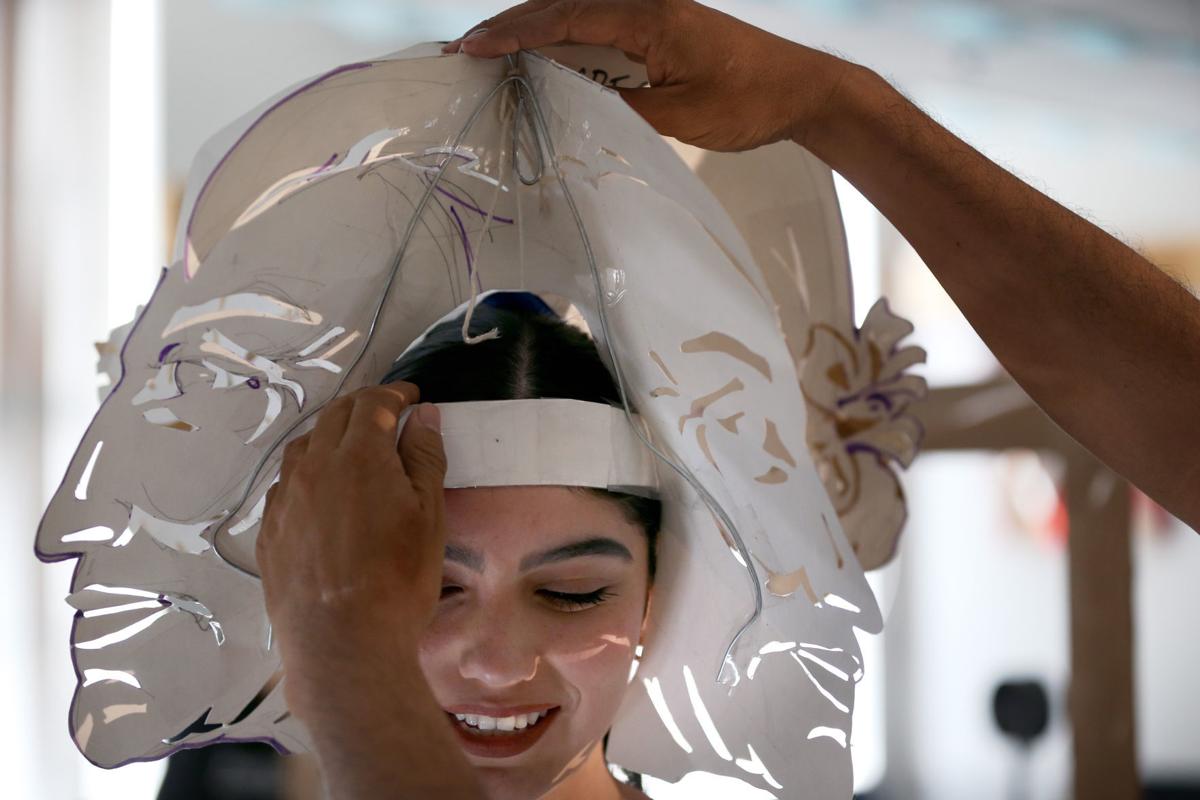 Raquelle Stevens gets some adjustments to the mask she’s wearing that casts the shadow of a homeless man for the shadow theater segment of “Barrio Stories.”, 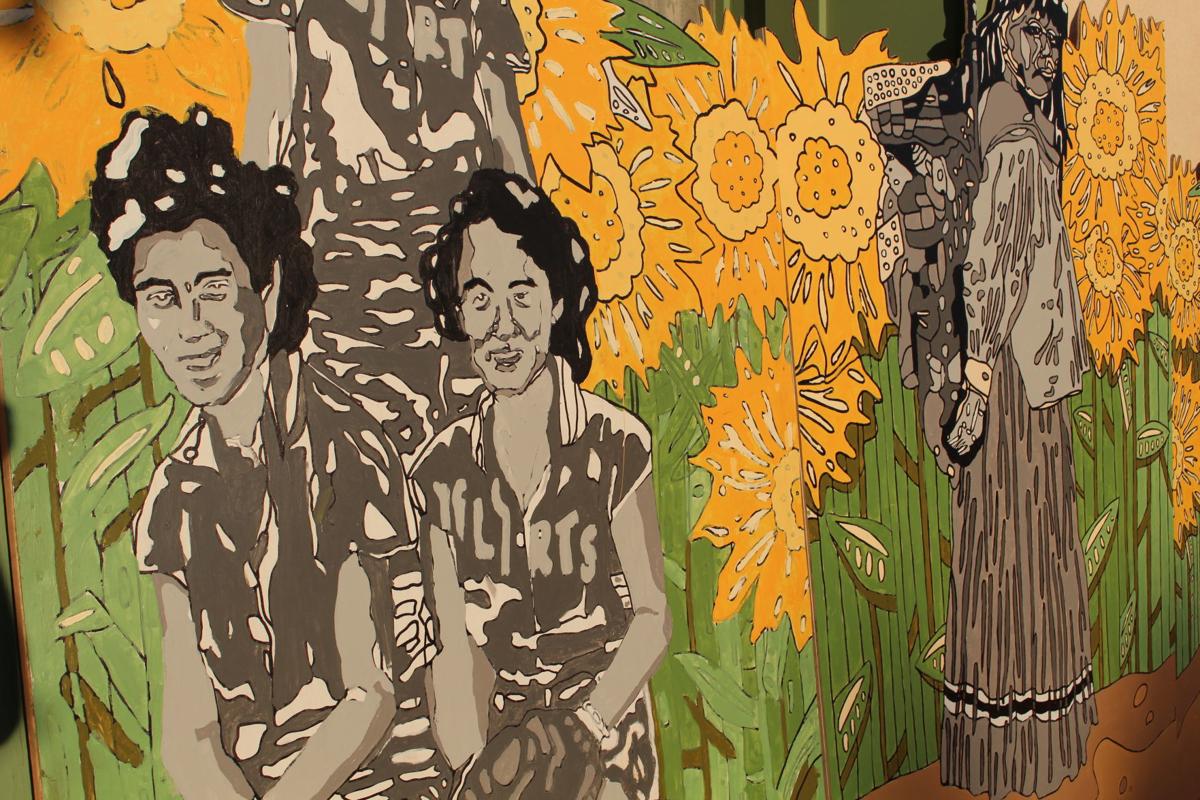 One of the mural panels created for “Barrio Stories in Barrio Anita,” organized by Borderlands Theater. It was designed by Wesley Creigh and painted by barrio residents and University of Arizona and Davis Bilingual students. 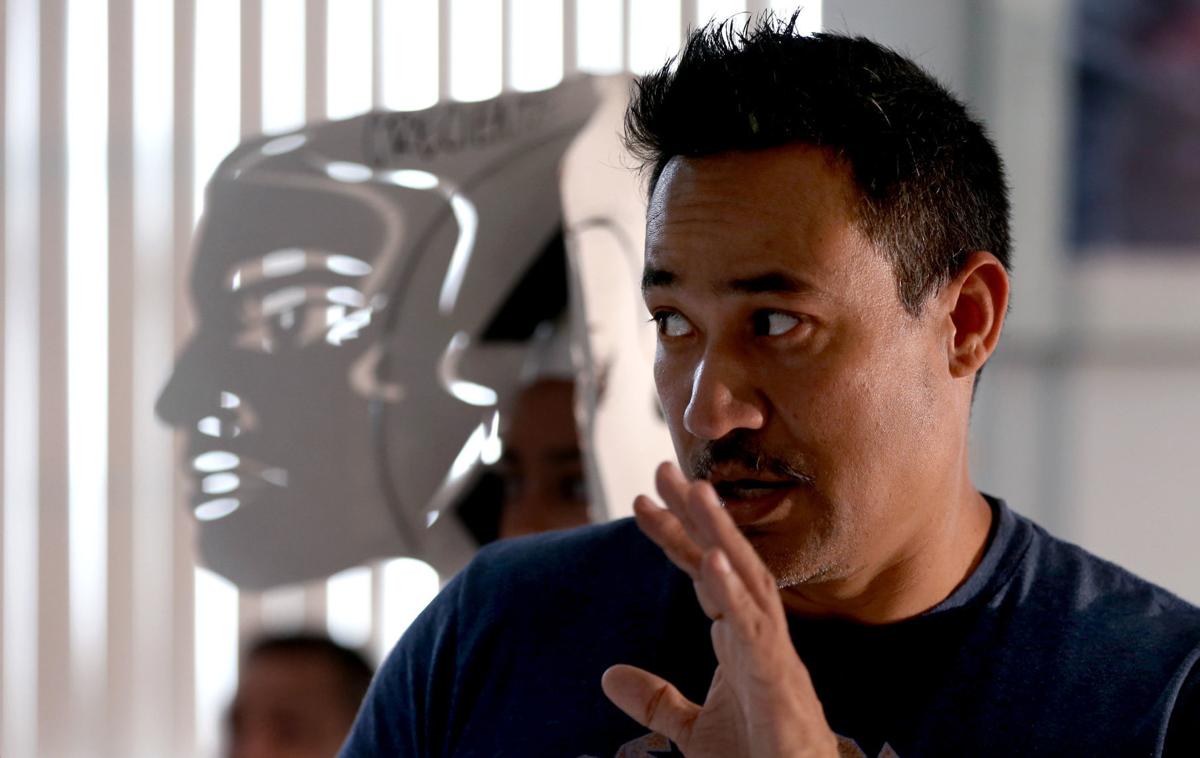 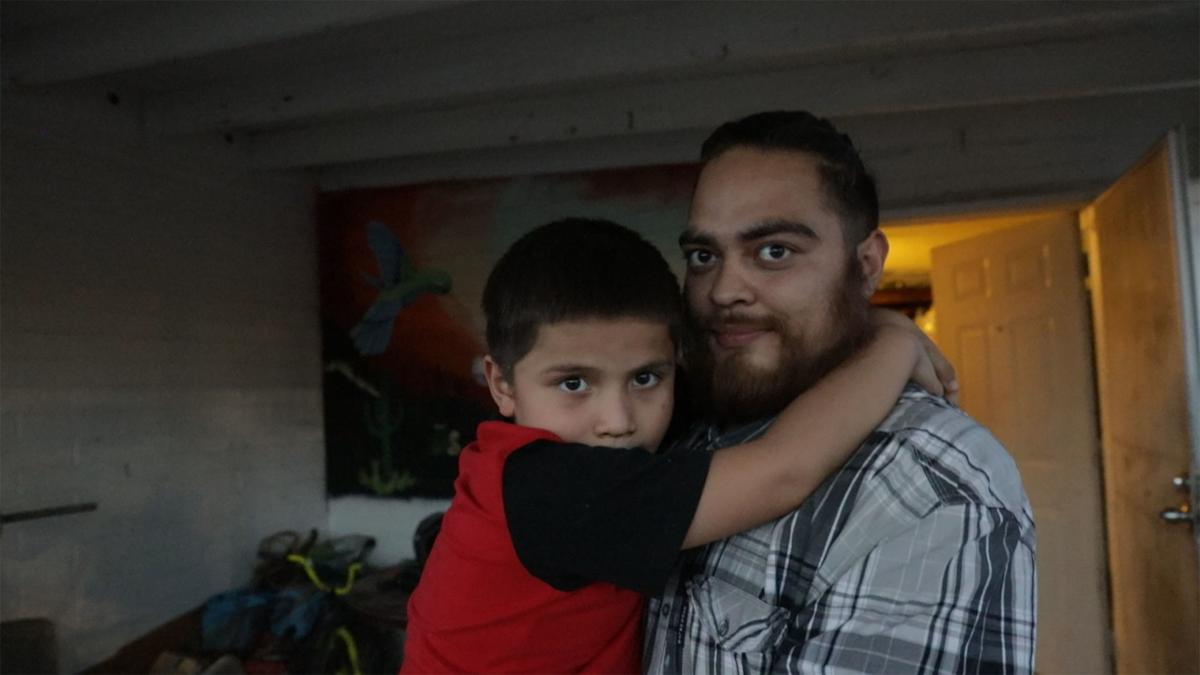 Julian Argote, Jr. left, and his father, and Julian Argote are among those whose stories are included in the video about Barrio Anita. 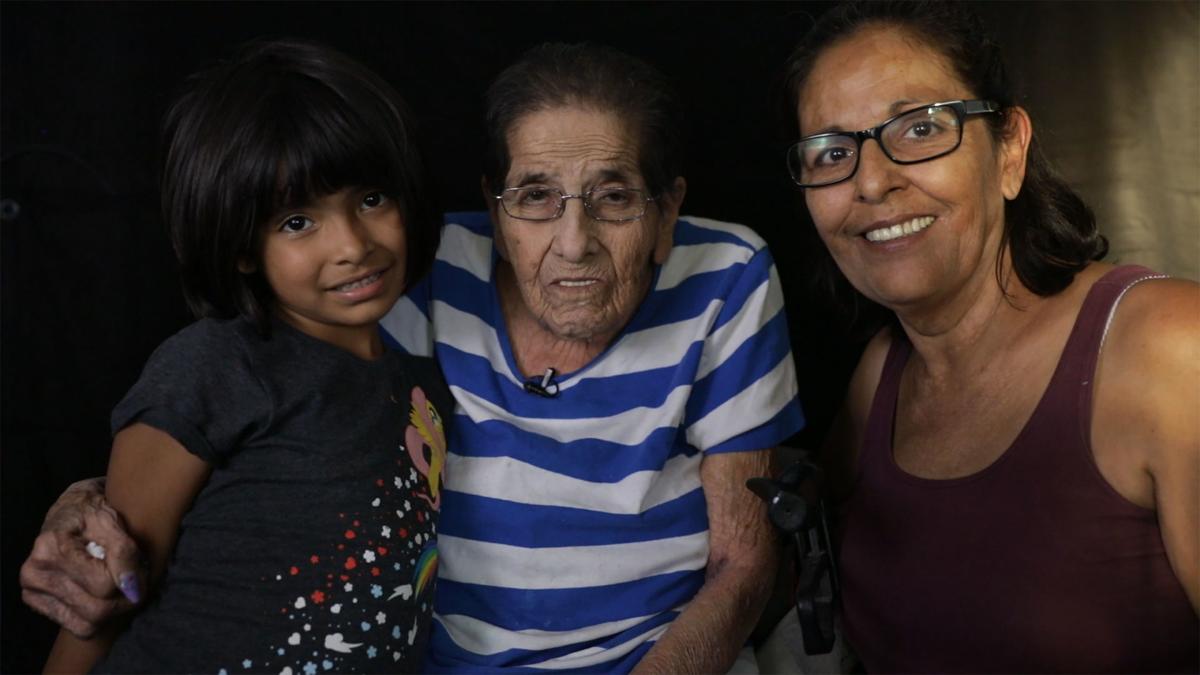 Three generations from Barrio Anita, from left: Martha Sanchez, Guadalupe Sanchez and Mary Valenzuela Sanchez. The Sanchez family’s memories are included in the Barrio Anita video, just one part of the neighborhood-based celebration.

The masks worn by Victoria Pereira, left, and Paulina Carrillo cast the shadow of a young girls and a man, two of the characters in the shadow theater segment of Barrio Stories, tales gathered from Barrio Anita and produced by Borderlands Theatre, Friday, April 6, 2018, Tucson, Ariz.