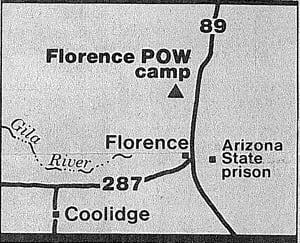 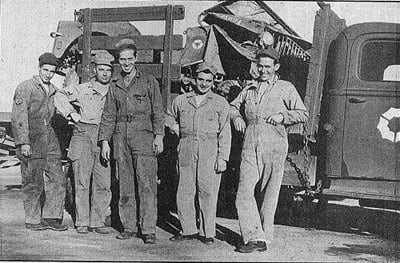 The men arrived on troop trains that came in the night. They all wore heavy coats with a big P on the shoulder and they would be spending the duration of World War II at the prisoner of war camp in Florence. It was one of more than ten such camps in Arizona.

The view from the guard tower of the camp in 46.

The first prisoners who arrived in Florence, about 70 miles northwest of Tucson, were Italian POWs. That was in May 1943.

But, following Italy’s surrender in early September of that year, the prisoners were shipped out. The German prisoners soon followed.

For an article on the camp, three Arizonans who had been stationed at Florence as guards spoke to a Star reporter. They were A.E. “Bud” Gomes, Don Young and Burt Freireich.

A map showing the location of the camp.

Gomes said there were two kinds of German prisoners — the draftees who had little enthusiam for the war and what he called the “hardcore Nazis.” Most he said were decent fellows who worked hard and hated to be idle.

The men were put to work in the camp picking cotton. They were paid 50 cents an hour. Young said the POWs often placed bets amongst themselves as to who would pick the most.

Don Young, in the middle of this 1944 photograph, worked in the motor pool at the POW camp.

The prisoners were allowed to buy tobacco, but not cigarettes. So, they improvised making their own devices to roll cigarettes. They also built a bar made of cactus for the camp’s officer’s club.

In contrast, the Italians were more easy-going and carefree despite their predicament and the uninteresting work. They often sang while they marched and performed operettas in the compound.

Freireich said the guards were in charge of work details of between 23 and 28 prisoners. Each guard was given a carbine and three bullets. Freireich said he kept his bullets in his pocket.

“I didn’t see any way I could stop 20 guys with three bullets, if they decided to rush me,” he said. “I figured it made more sense to surrender an empty carbine if it came to that.

Gomes recounted one particular story that had remained with him through the years. Late one night a group of new POWs arrived. He asked if any spoke English and one stepped forward.

Then the German said: “Do you mind if I have a cigarette?”

The German said: “Remember when you could get a pack of these for 13 cents.”

Gomes looked at the man: “Yes, I do. But how the hell do you know about that?”

It turned out the German had lived in Cleveland for several years before the war and decided to visit his parents in Germany. The year was 1939. When he arrived in his homeland, he was drafted.

Following the war, the camp served as a minimum security prison and later a hospital. The site was closed down for good in 1966. Today, nothing remains of the camp.

A Seattle author, Jack Hamann, has created a Web site on the Florence camp at http://www.jackhamann.com/florence.html.

An updated list of Tucson, Arizona bars and restaurants that had to close their doors during COVID-19 restrictions, plus some information on how to help the food scene in the future.