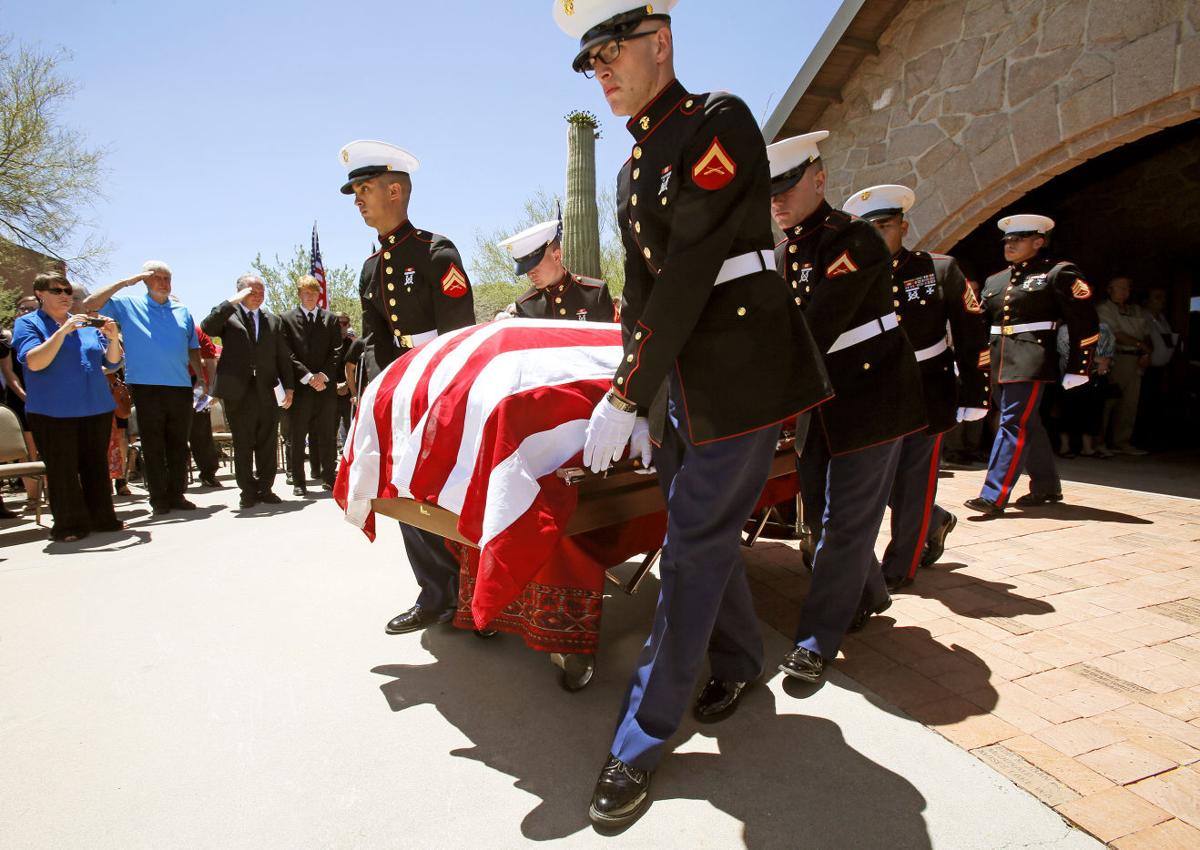 Marines bring the flag-draped casket outside following church services for Lance Cpl. Matthew Determan at Our Lady of the Desert Church on May 30. 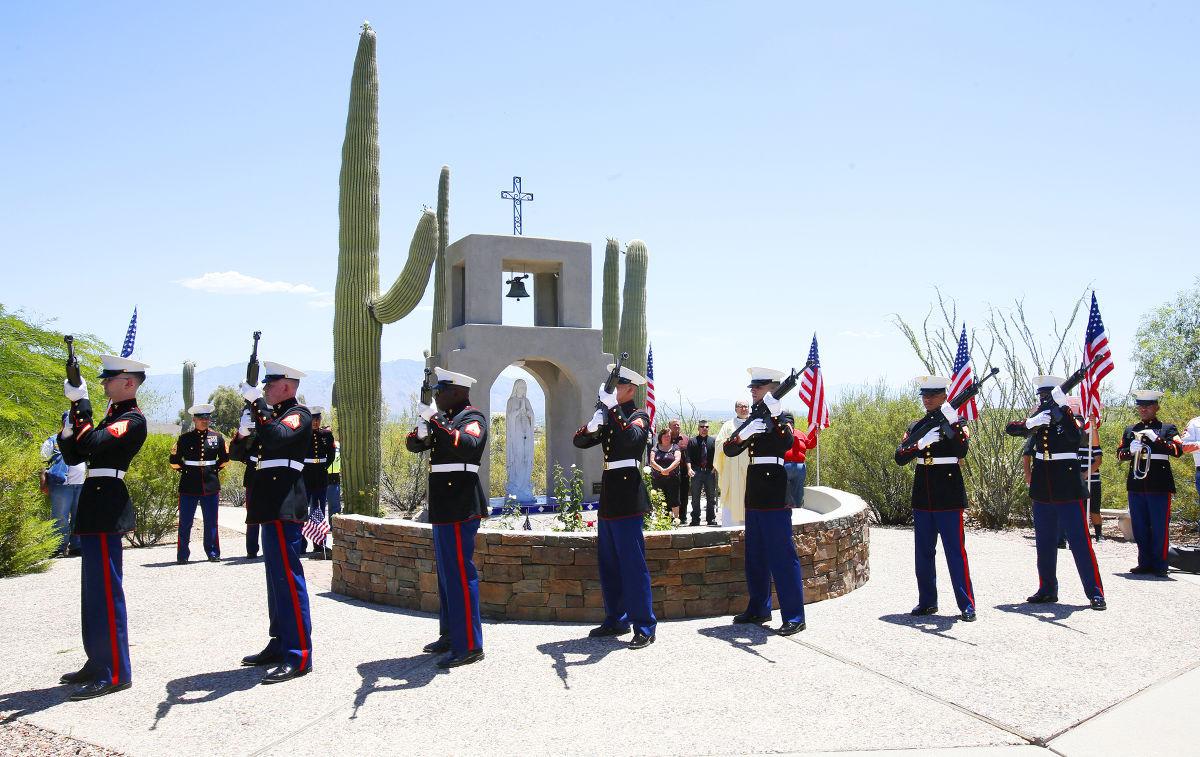 Marines prepare a 21-gun salute following church services for Lance Cpl. Matthew Determan at Our Lady of the Desert Church. Services for eligible veterans must have two uniformed service members present for the playing of “Taps,” the flag folding and the flag presentation, if requested. Additional honors can include a rifle detail, color guard, pallbearers, caisson and a flyover. 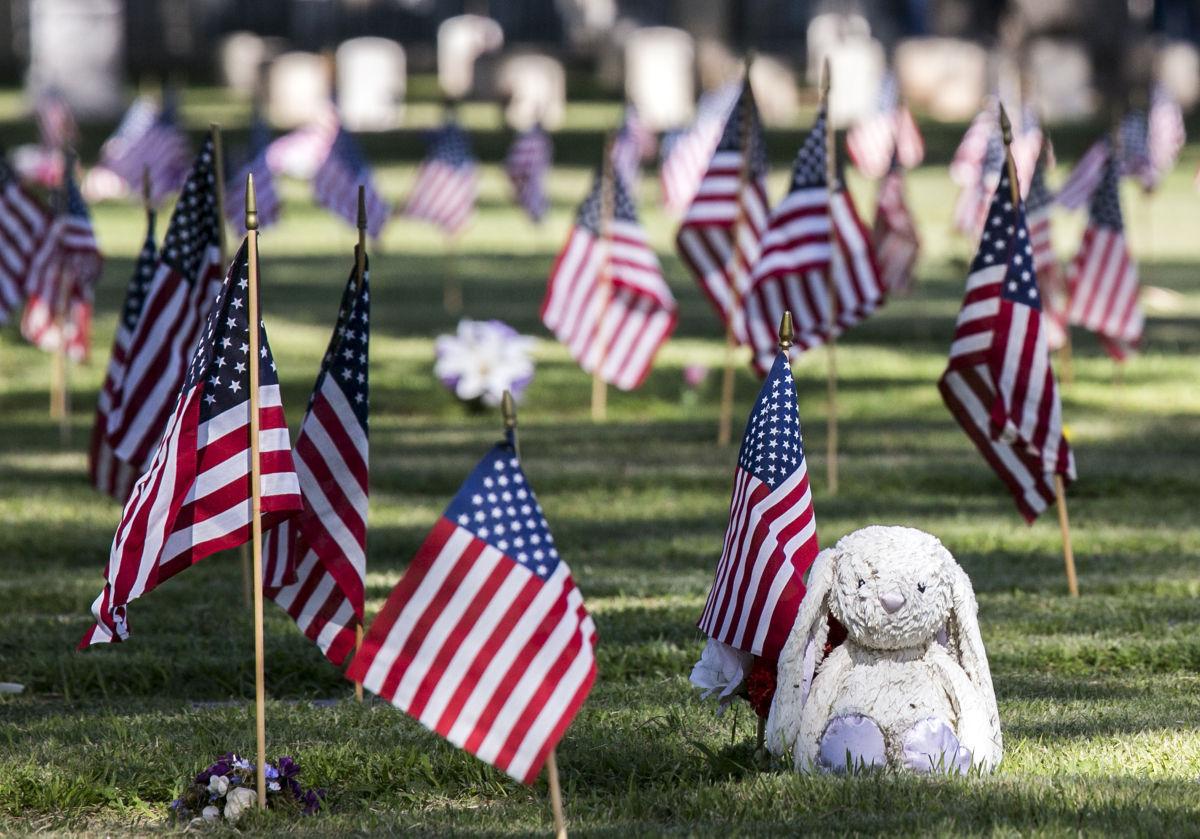 Hundreds of flags on the graves of veterans at Evergreen Mortuary & Cemetery fly in the breeze last month in preparation for Memorial Day Ceremonies. Flag Day commemorates the approval of a national flag by the Continental Congress in 1777. 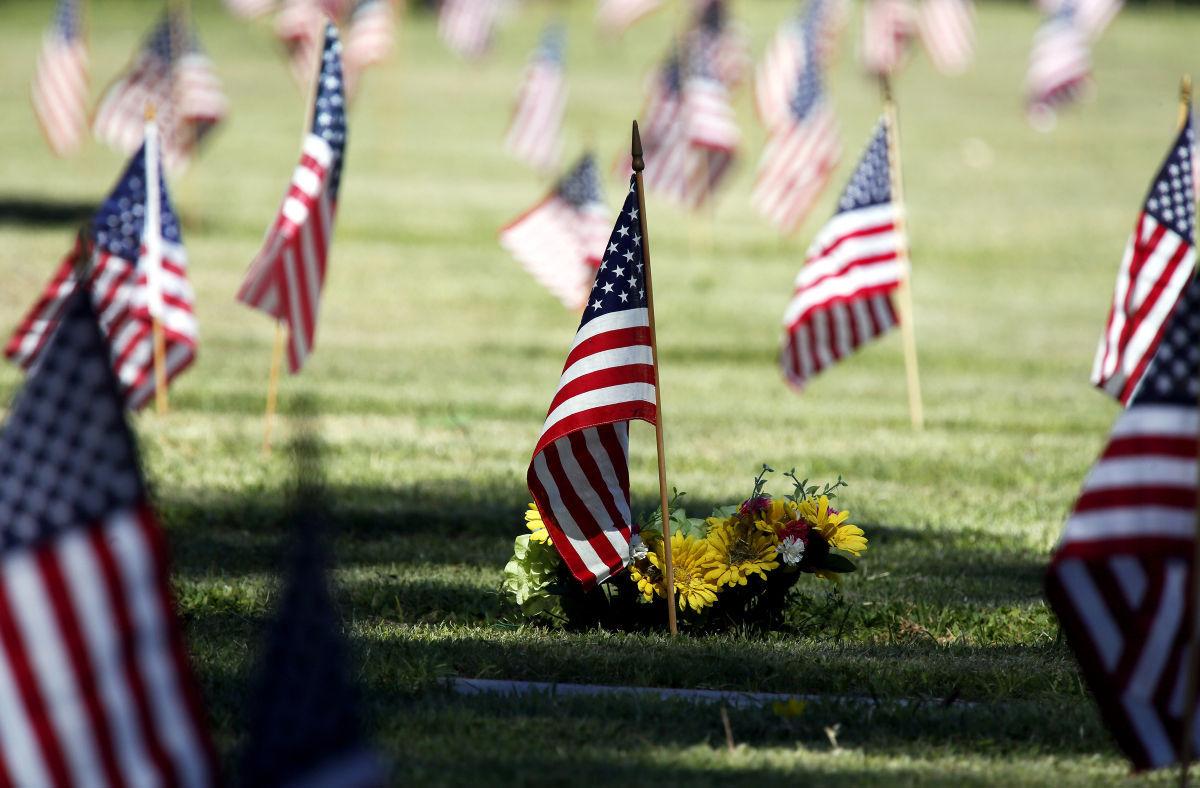 In the moment that a folded, American flag hovers between a member of the U.S. Armed Forces and a grieving parent, spouse or child, it symbolizes both gratitude and sacrifice.

It is a transaction honor guards perform many times throughout Southern Arizona as part of a memorial rite honoring those who have served in the military.

The hand-off is emotionally charged, with a member of the honor guard offering the standardized message of condolence to the family: “On behalf of the President of the United States, (the appropriate military branch), and a grateful Nation, please accept this flag as a symbol of our appreciation for your loved one’s honorable and faithful service.”

Everyone — stoic service members included — feels the power of that moment.

“I have passed the flag, and the first time I did it, I was in Sierra Vista and it was so humbling to me, and it meant so much to that family,” said Airman 1st Class Braulio Torres, who is stationed at Davis-Monthan Air Force Base.

“It’s a way for them to find comfort in a time of grieving, and when I did it, it was about an hour and 15-minute drive back, and I couldn’t say a word because I was just so humbled by the whole experience. It’s very special. You look at the family member or next of kin in the eyes and give them the message of condolence, and they’re looking back at you, and it’s hard not to break down, but you have to keep it together. You have to be that rock for that family in that difficult time,” said Torres, who has served in the honor guard since March.

Flag Day commemorates the approval of a national flag by the Continental Congress in 1777.

Torres is one of the many who serve in the honor guards of the U.S. Armed Forces, using somber precision to fold the flag 13 times — into the shape of the tri-cornered hat worn by patriots during the American Revolution. Only the stars show.

Funeral honors vary depending on family preferences and military status of the deceased. In general, honors are due to both military members who died in service and those who “were discharged under other than dishonorable conditions,” according to the U.S. Department of Defense’s military funeral honors overview.

By law, funeral services for eligible veterans must have at least two uniformed service members present for the playing of “Taps,” the flag folding and the flag presentation, if requested. Additional honors can include a rifle detail, color guard, pallbearers, caisson and even a flyover.

Tony Parker, who has worked at Adair Funeral Homes’ Dodge Chapel as a funeral director intern for about one year, said the flags draped over caskets and presented to families usually come from a local post office. The U.S. Department of Veterans Affairs distributes flags to post offices and VA facilities around the country and the world.

“They are high-quality flags,” Parker said. “And they say, ‘Made in America.’”

Parker has seen an increase in services for veterans who served in more distant conflicts such as World War II or the Korean War. The appropriate branch honors the deceased. For example, an honor guard from Fort Huachuca responds for U.S. Army funerals, often doing more than one service a day, Parker said.

One recent service Parker remembers was for a Merchant Marine seaman who served during World War II. The U.S. Navy performed that service, he said, as a law requires some merchant mariners from WWII to receive military honors.

“If you had someone who was in the military a long time ago and did everything the military way, it helps the spouse and children with closure,” Parker said of military honors. “This is what it led up to. This is the country honoring Mom or our father, and it gets you. Especially if there are bagpipes, bring on the Kleenex.”

Through it all — through tears, remembrances and comforting prayers — the members of the honor guards maintain their military bearing, but not for want of compassion.

We spoke with several members of local honor guards about these powerful experiences with the American flag. Here are some of their thoughts.

For about a year, Knight has worked with 10 active-duty Marines and additional reservists to provide full honor details out of the Bulk Fuel Company Alpha unit in Tucson. He tries to work with the same Marines when possible. On site, they inspect uniforms, the flag, the bugle and rifles.

“From my side, it’s a huge honor to be doing this because it’s the Marine Corps and the United States paying last respects and thanking the family and Marine for their service, so I take that as a huge honor,” Knight said. “The biggest moment is during ‘Taps.’ ... My dad was in the Navy, and that was the most powerful moment from the other side as well.”

Presenting the flag to next of kin is always harder when the service honors a young Marine who died “whether overseas in a war zone or training or off duty,” Knight said.

They do services for Southern Arizona, to Sierra Vista and down to the border. As of last week, they had done 40 funerals this year.

“Whether they are retired or got out after four years it’s impactful,” Knight said. “A lot of these guys got out of the Marine Corps as a lance corporal, so four years or less out of 60 or 70 years of life, and it shows how big of an impact (military service) had on them and their lives.”

As the full-time funeral honor coordinator for the Navy Operational Support Center in Tucson, Schultz has done her share of military funerals.

But her job also includes working with Tucson Medical Center’s hospice program to honor Navy veterans and their families with a plaque.

“Even though I am doing what I am doing, I never thought about the sacrifices people have made previously and what they went through and what their families went through,” Schultz said. “To hear them talk about it, it’s very emotional, and ... the majority of them don’t understand why we are thanking them, because for them, they were doing their job, and that’s what they were supposed to do.”

Since October 2014, Schultz’s honor guard has done roughly 150 Navy funerals throughout Southern Arizona and into New Mexico. She has been doing funerals for six years, but said, “As soon as you hear ‘Taps’ play, I don’t care how many times you have heard it, it makes your hair stand on end and you feel patriotic and proud.”

Serving this way is an honor.

“I look at my life and career and will never come close to what they have been through, so it’s not that I can relate on their level,” Schultz said.

But she can imagine. She has two sons with military experience — one recently released from the U.S. Army and another serving in the Army National Guard. Her sister is in the Air National Guard. “To know they could be put in harm’s way...” she trailed off. The thought is always there.

When Torres joined the Air Force about two years ago, he knew he wanted to serve in an honor guard.

“I’m from New York, so the Air Force Honor Guard would always do the parades up in New York, and I would say to myself, ‘Wow, this is what the Air Force is,” he said. “I knew I wanted to be a part of it someday.”

Torres has served in the honor guard since March. Now, he is a trainer at Davis-Monthan Air Force Base teaching others the significance of serving.

“Obviously, in movies and on TV you see what a military funeral is and what a presentation of colors is,” he said. “It’s one thing to see and another thing to actually be part of it. ... It’s just humbling. It has just made me think and appreciate what it means to serve in the military, because those before us paved the way for us, and I’m just here taking the baton and hoping to pass it forward to other airmen who come after me.”

Davis-Monthan has two honor guard teams that alternate months. During their months in the honor guard, the airmen spend the day preparing for details, including funerals, in the southern and eastern regions of the state, said Tech. Sgt. Troy Agustin, who oversees the program. They have done 115 funerals since the start of 2015, he said last week.

In their off months, airmen return to their typical jobs. Torres, though, will leave the base in the fall. Until then, he will not rotate out of the honor guard, but will continue to serve there in the coming months.

“I couldn’t be happier,” he said. “It is a privilege and an honor to be able to represent the Air Force out there.”

American flag lore begins with the legendary and not quite proven commissioning of seamstress Betsy Ross by George Washington to design a flag in 1776. Since then, 27 official versions of the flag have existed, with the most recent version approved July 4, 1960 to include Hawaii as the fiftieth state and star.

SOURCE: The Library of Congress' "Today in History."

Gifts for couples who have everything

Gifts for couples who have everything

Chaplains from Tucson VA to honor sacrifice of WWII clerics

He died in Vietnam. Now her family wants to honor his sacrifice and his mother's loss.

Several streets will be closed Friday as the Veterans Day Parade winds its way through downtown Tucson.

Marines bring the flag-draped casket outside following church services for Lance Cpl. Matthew Determan at Our Lady of the Desert Church on May 30.

Marines prepare a 21-gun salute following church services for Lance Cpl. Matthew Determan at Our Lady of the Desert Church. Services for eligible veterans must have two uniformed service members present for the playing of “Taps,” the flag folding and the flag presentation, if requested. Additional honors can include a rifle detail, color guard, pallbearers, caisson and a flyover.

Hundreds of flags on the graves of veterans at Evergreen Mortuary & Cemetery fly in the breeze last month in preparation for Memorial Day Ceremonies. Flag Day commemorates the approval of a national flag by the Continental Congress in 1777.