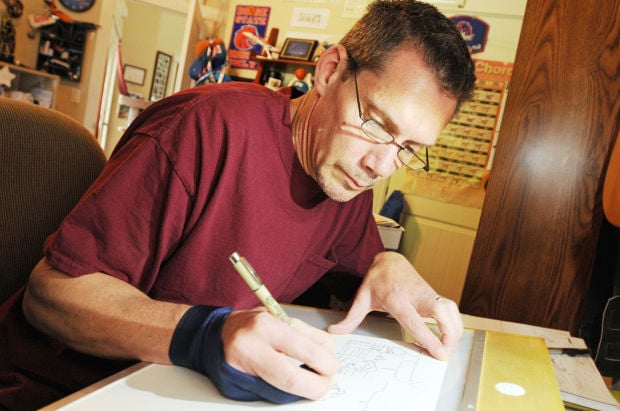 Cartoonist Todd Clark says Mad magazine, rather than the “Peanuts” strip, was an early inspiration. 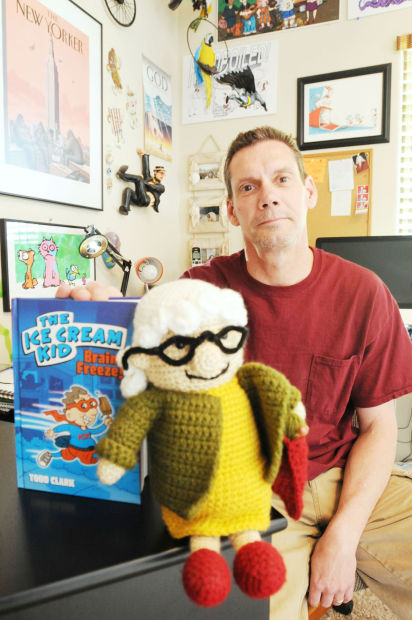 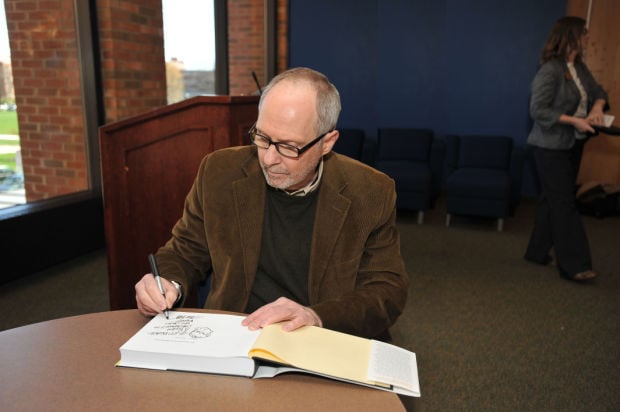 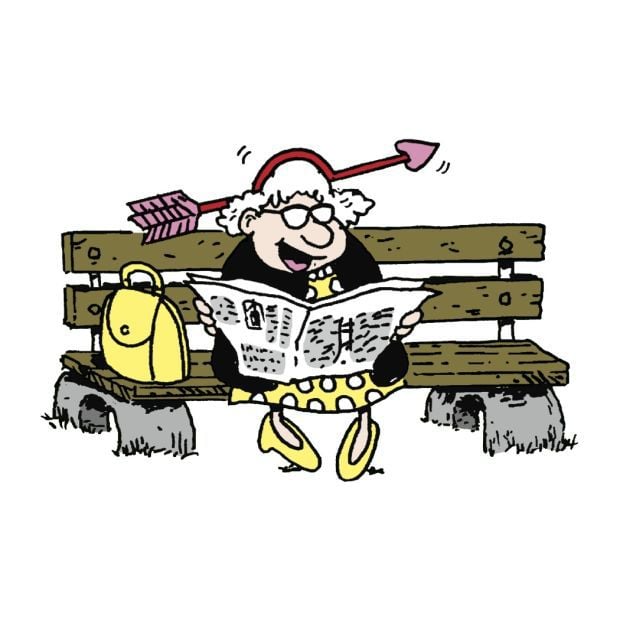 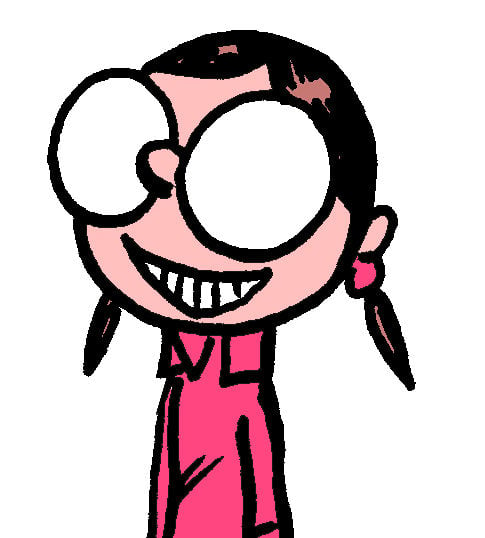 Gabby Macfarlane, one of the twins from “Grand Avenue.” 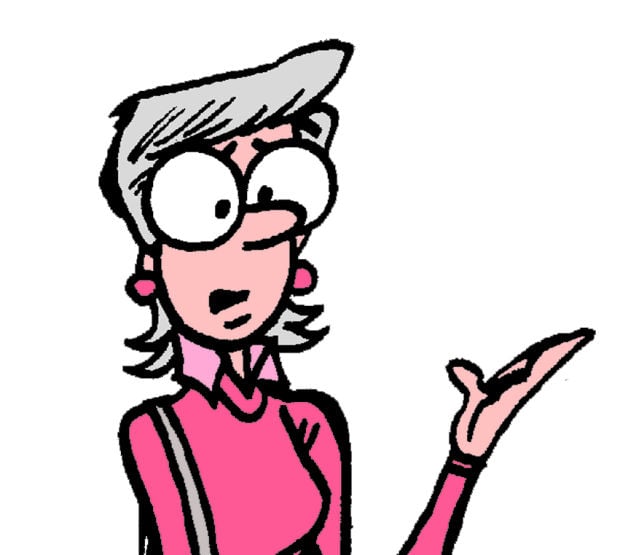 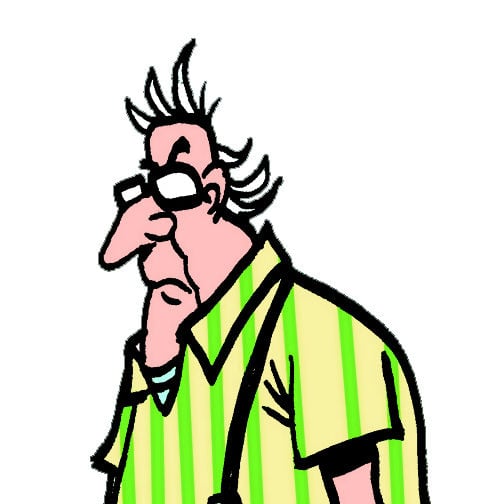 Mr. Barnaby, one of the characters from “Grand Avenue.” 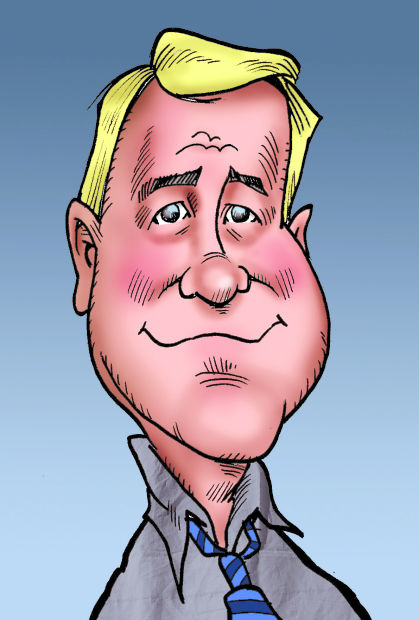 A caricature of Mike Thompson, who draws “Grand Avenue.” 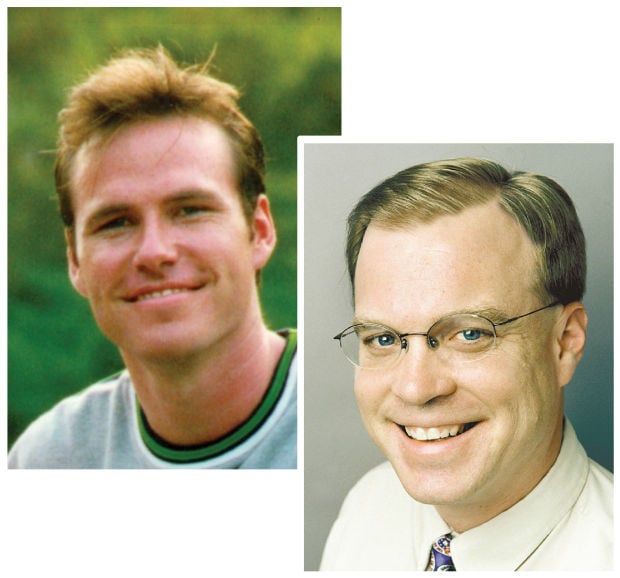 Steve Breen, left,created “Grand Avenue” and Mike Thompson now does much of the writing and editing. 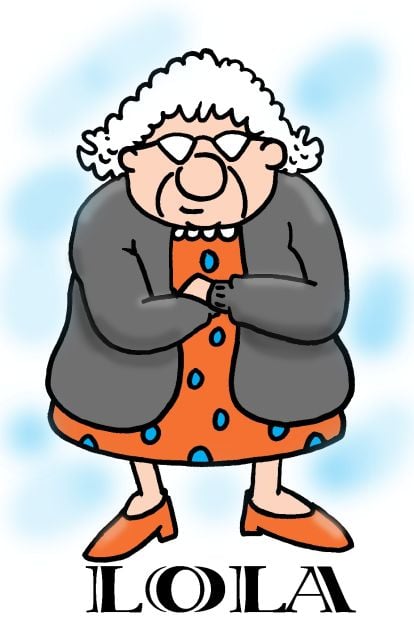 Todd Clark says the humor in “Lola” comes from her independence. 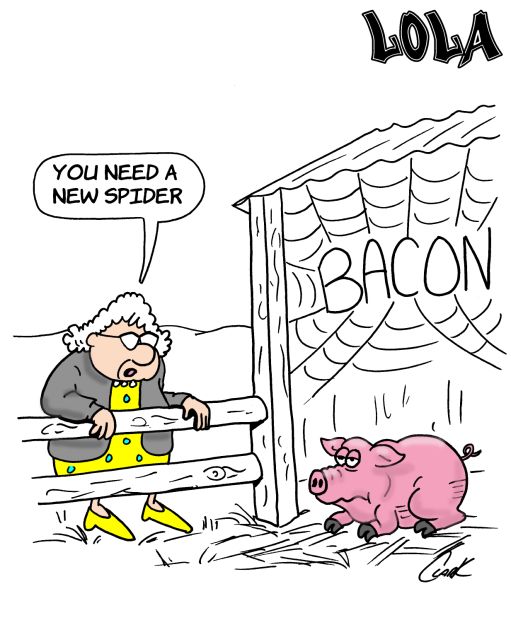 Most of us have a “Lola” in our lives, says Todd Clark, the strip’s writer-illustrator.

Everyone can use a good laugh.

Ed Crankshaft, Lola and Grandma Kate Macfarlane sure think so, too.

“Crankshaft,” “Lola” and “Grand Avenue” hit home and will draw chuckles and maybe a few tears. You remember — grabbing the paper from your parents, still pajamas-clad, flipping to the comics in the back.

And then life happens.

These characters know that well.

To welcome these friends to our pages, we chatted with their artists on laughs and life.

Tom Batiuk, 67, chatted by phone from his home in Medina, Ohio, about “Crankshaft,” his comic strip of a grumbling, gardening, baseball-loving bus driver. Created by Batiuk and illustrated by fellow Kent State alumnus Chuck Ayers, “Crankshaft” began syndication in 1987 and appears in more than 300 newspapers.

Batiuk got his start cartooning in 1972 as a 20-something juggling a full-time job as a junior high art teacher with his original high school comic, “Funky Winkerbean,” which drew inspiration from the antics and dramas of his students.

Creating Crankshaft: “Initially, Ed Crankshaft started in another strip I do, ‘Funky Winkerbean,’ as the school bus driver. He was based on this school bus driver I had. I was in band and played trombone, and I was one of the last kids on the run, so I would be running down the driveway with my trombone case, and I was traumatized. When I first put him into ‘Funky,’ I got so much response, I thought about spinning it into another strip. What brought him on was when I introduced his family, living at home with his daughter and her husband, and that opened the door with his personality and examining his life. That related to what I know, and there are a lot of baby boomers out there going through the same thing with their parents.”

Character inspiration: “Normally, when I create characters, I do like to take things from real life, and I’ll take things and exaggerate the personalities of a person to create a character. I had to tone him down a bit, because my bus driver was a pretty wild guy. I guess there were a lot of recovering bus riders out there, and I just got a big response, and that’s really all a cartoonist needs to keep going.”

Working with an illustrator: “When I was a kid growing up and reading the comics, one of the things in the Marvel comics that Stan Lee always wrote about was the Marvel bull pen, and I always thought, ‘That’s got to be a great place to be.’ It turns out it was a fantasy. Everyone works at home. I write the material up and we get together every two weeks, and we go over them, and he (Chuck Ayers) laughs at the jokes and takes those ideas to the moon and back.”

Childhood cartooning dreams: “It was actually a good break for me that I didn’t get to do Spider-Man or Batman. I would have outgrown that. I fell into strips where I get to take from real life. ‘Crankshaft’ is from real life. The ideas just walk in the door, and once you’ve got the cast of characters set up, it becomes easy and the ideas flow a lot better.”

Taking on serious issues — in the “funnies” section: “It developed with ‘Funky’ on a storyline with a girl pregnant in high school. It showed me that the medium I work in you could do ideas of substance and tackle those, and it showed me that there is an audience for this kind of material and showed me that the characters would have to grow up. It helped my work mature and carried into ‘Crankshaft.’ The neighbor next door was diagnosed with Alzheimer’s, and I like to bring the real world into the strip. There can still be humor in this, but I think it makes it a little more real.”

Most people have a Lola in their lives, says comic strip writer and illustrator Todd Clark. With nary a care for dieting or political correctness, the independent granny has appeared in newspapers for about 15 years, and is now syndicated to more than 100 papers. Inspired by the great Aunt Lola of Steve Dickenson, Clark’s partner for the strip’s first eight years, the cartoon and real Lola share a tough spirit and a history of service as an officer in the Army during World War II, though Clark said the real Lola was far kinder.

A full-time cartoonist for about 20 years, Clark has also written for other comic strips while writing and drawing “Lola,” including “Sherman’s Lagoon,” “Mother Goose and Grimm,” “Frank and Ernest,” “Tundra,” “B.C.,” “Wizard of Id,” “Baby Blues,” and “Zits.”

Clark, 51, carved out some time to chat with us from his home in Boise, Idaho.

All about “Lola”: “It’s a family strip, and Lola is obviously the star. If (readers) are not familiar with the strip at all, the premise is that Lola is recently widowed, and at the insistence of her son, moved in with him and his family. She didn’t need help, and that’s where humor comes from. She’s independent. She has her own money. It’s like moving a teenager back in at 78 years old. They have a lot of big differences.”

Always an artist: “You hear so many cartoonists talk about reading ‘Peanuts’ everyday, but that wasn’t me. We had the paper, but it was Mad magazine that got me going. This is something I hadn’t seen before. It almost seemed like you were doing something wrong or naughty when you were reading Mad because it was weird. My dad used to buy the paperback collections of the ‘B.C.’ comics, and I thought the guy riding on the wheel was the coolest. I’d always been an artist. My mom was an artist. I did more serious stuff until I got to college and realized I sucked compared to everyone else. I thought, ‘I’ll do that cartooning.’ ”

Motivation for fresh jokes: “I haven’t run out of jokes, not yet. There are days that you just stare at blank paper and drink coffee everyday, and it’s not a big bonanza of ideas. That’s just what I do. ... I wasn’t a class clown type, but I’ve always been able to make people laugh. That’s where the combination of realizing I wasn’t going to be the next Salvador Dali and going, ‘I could always make people laugh.’ Going from serious artwork to cartoons is a big difference.”

Motifs in “Lola”: “(Lola) is on the bench in the park a lot, and I thought that would run out of ideas, but you can have anything happen, like she’ll talk to Popeye or one of the Seven Dwarfs and that goes back to ‘Mad Magazine.’ I do like doing bizarre things. I used to have her getting pulled over by the same cop a lot. Those things are just such senior things, and I don’t like those as much. I don’t want it to be a stereotypical senior thing, because she is an active person.”

When Mike Thompson isn’t taking on current events as a full-time political cartoonist for the Detroit Free Press, he is illustrating the comic strip “Grand Avenue.”

The strip, which is syndicated to about 100 newspapers, chronicles the lives of Kate Macfarlane and her two grandchildren, as the active and untraditional grandmother raises mischievous twins Gabby and Michael.

Thompson, 49, started work on the strip in 2005, joining Steve Breen, a two-time, Pulitzer Prize-winning editorial cartoonist, who created the comic in the late 1990s. Thompson, a three-time Pulitzer Prize finalist himself, now illustrates and writes most of “Grand Avenue” and spoke with us by phone from Detroit.

A slice of life: “Some of it (‘Grand Avenue’) is drawn from life. I’m married with two kids. A lot of the experiences we’ve done, it’s not autobiographical, but certainly, if you want to find out what we’re doing two months prior, look at the strip. If they’re on vacation, chances are we were on vacation. If they’re fishing, that’s probably something we did months prior. It’s an interesting demographic for the strip. It appeals to older readers and younger readers as well, and the generational conflict plays out in the strip a lot.”

Political cartoons and comics: “Steve started, and I’ve continued, the tradition of keeping it nonpolitical. By the time I’m done drawing about politics, I’m tired of the tough topics, and there are so many other things in the world to draw about, interesting topics on the relations between humans and things that aren’t political in nature, but are funny and quirky and make for great cartoon fodder.”

Parenting tech-savvy kids: “I think issues like how people respond to new technology or related to parenting or bringing up children in a media-saturated environment are weighty and important. ... You can talk about issues that are significant without being political. There is no need to tackle those topics when every day is confronted with how to raise our children in an environment that has almost no filters. Raising our kids is the most important thing any of us will ever do, and our relationship with our family is the most important thing in our lives.”

Artistic beginnings: “I’ve always been interested in art, since I was a little kid. My father was in the business of managing art museums, and he taught art at the college level, so I was exposed to it growing up, and I grew up in Minnesota on the same street as Charles Schulz. I was there after him, but I didn’t find out until after. ... I was a big fan of political cartoons for as long as I can remember. I came across a book of political cartoons in the library that immediately attracted me to the art form. I was fascinated that an idea or concept could be communicated visually with a few words better than a long-winded column.”

If Grandma took the twins on a road trip: ”Grandma Kate has this thing about stopping at every historical marker and checking it out, which is a lampoon of myself. I’m that way and the kids are in the back seat of the car wondering when they’re going to get there, as opposed to when I was that age, we didn’t have iPads or iPhones to entertain ourselves, so there would be that component as well.”

Cartoonist Todd Clark says Mad magazine, rather than the “Peanuts” strip, was an early inspiration.

Gabby Macfarlane, one of the twins from “Grand Avenue.”

Mr. Barnaby, one of the characters from “Grand Avenue.”

A caricature of Mike Thompson, who draws “Grand Avenue.”

Steve Breen, left,created “Grand Avenue” and Mike Thompson now does much of the writing and editing.

Todd Clark says the humor in “Lola” comes from her independence.

Most of us have a “Lola” in our lives, says Todd Clark, the strip’s writer-illustrator.