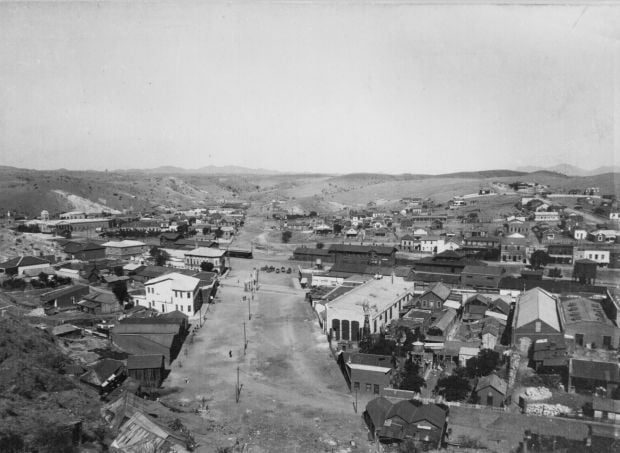 International Street ran between Nogales, Arizona, right, and Nogales, Sonora, as shown in this circa 1898-99 photo.

Panorama of Nogales, Arizona in 1909.

Nogales Highway derives its name from the border town that’s about an hour’s drive south of Tucson.

Nogales, Arizona, whose name means “walnut trees” in Spanish, is said to have taken its name from the plentiful trees in the surrounding hills. It was previously known as Isaacson and the Line City.

• It was the second city of Pima County, both in size and in importance. Two years later, it became the county seat of the newly formed Santa Cruz County.

• The mayor was G.A. Avery, a pioneer merchant in the furniture business who served about three years on the Nogales City Council and four years on the Pima County Board of Supervisors.

• People traveled from Tucson to Nogales by rail or stagecoach. The Southern Pacific Railroad carried passengers to Nogales, where P.J. Zeimet, whose office was on the border line, was the railroad agent. Travelers who wanted to see some of Arizona’s backcountry. including the valleys, mountains and the Santa Cruz River, could book a slower trip on Mariano G. Samaniego’s stage line.

• The Erie Cattle Co. built 75 miles of fence that year east of Nogales along the border. The purpose was to keep their cattle from wandering into Mexico, but this was likely the first large-scale fencing of the 389 miles of the Arizona-Sonora border. In the town itself, Sonora Gov. Jose M. Maytorena ordered construction of an 11-wire fence in 1915 — but it was taken down four months later. In 1918, as a result of the Battle of Ambos Nogales, both the U.S. and Mexico agreed on a permanent fence down the middle of International Street.

• The police force consisted of the city marshal and one assistant. The city marshal and his counterpart in Nogales, Sonora, appear to have had a private understanding about individuals crossing the border to seek immunity from arrest. They were quickly pushed across the line in the sand and into the hands of the law on the other side.

• The town had a volunteer Fire Department and boasted a high-pressure fire engine that had cost $1,500.

• About 20 new and modern buildings had been built in Nogales, Arizona, and there was talk of building a fine new City Hall, fire engine house and opera house. The town already had a telephone system, electric lights and water works, as well as an ice plant, although it is unknown how many residents had these services in their homes and businesses. The main fuel used in town was wood, and a “sewerage” system was being considered.

• The title to property was uncertain because some people claimed that the town fell within the limits of the Los Nogales de Elias land grant, which they had claim to. However, the U.S. Supreme Court decided in 1896 that the townsite was outside the boundaries of the land grant and it was expected that title to property would be given out in the next few years. This was expected to help the growth of Nogales.

• Business was done in cash, with credit used only in rare cases. It’s believed that Mexican currency was still commonly used in Nogales, Arizona, at this time.

• The town had three churches. The Methodist Episcopal Church, led by the Rev. S.V. Dilley, had a congregation of about 40 people and a seminary school with 180 pupils. It also had a Spanish branch, run by the Rev. E. Quinones, which held services in a separate building. The second, Trinity Congregational Church, had been established in 1887 and was run by the Rev. J.H. Heald with an average attendance of 35 parishioners. The third was a Catholic church, which was well-attended in spite of having another one of the same denomination just across the border.

• Public school was held in a large building and was run by professor T.F. Grindell, along with two teachers: Ms. Ekey and Ms. Sprecher. The school district had 432 children, but not all of them could attend classes due to a lack of accommodations.

• Two newspapers helped keep residents up to date with local happenings. The Oasis was founded by Allen T. Bird in the boomtown of Arizola, Arizona, and moved for a short time to Benson before relocating to Nogales. The Border Vidette originated in Nogales in 1894, published by Frank M. King.

John J. Dreyfuss, “A History of Arizona’s Counties and Courthouses,” National Society of the Colonial Dames of America in the State of Arizona, 1972

No fence along the border note, Arizona Weekly Citizen, Sept. 14, 1895

Leighton will be a celebrity judge at the Rincon Rotary Club's "Taste of Chocolate" event on April 19. The event will be held from 2 p.m. to 4 p.m. at the Doubletree Hotel, 455 S. Alvernon Way. Tickets are $15 each, with kids under 4 admitted free with a paid adult. For more information visit tucsontasteofchocolate.org/

International Street ran between Nogales, Arizona, right, and Nogales, Sonora, as shown in this circa 1898-99 photo.

Panorama of Nogales, Arizona in 1909.