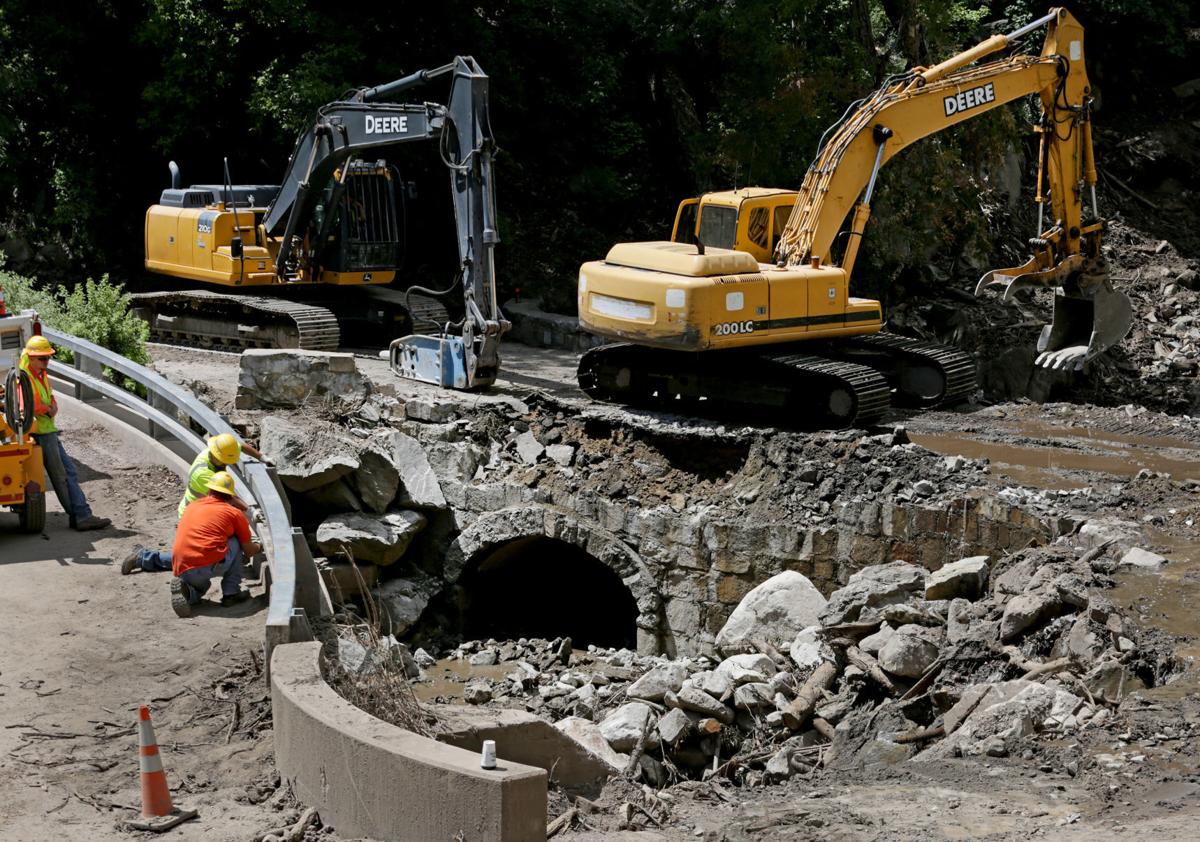 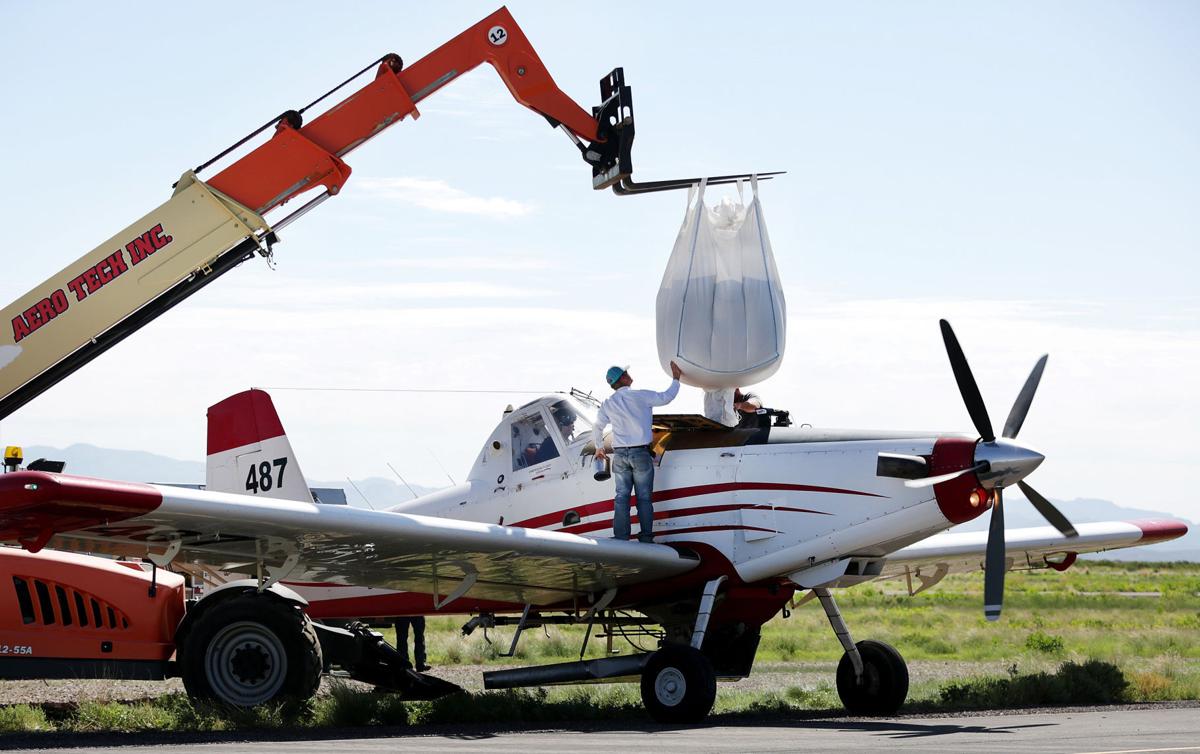 A crew from Aero Tech out of Clovis, New Mexico, reloads a plane that will scatter 2,500 pounds of barley seed over areas scorched by the Frye Fire. 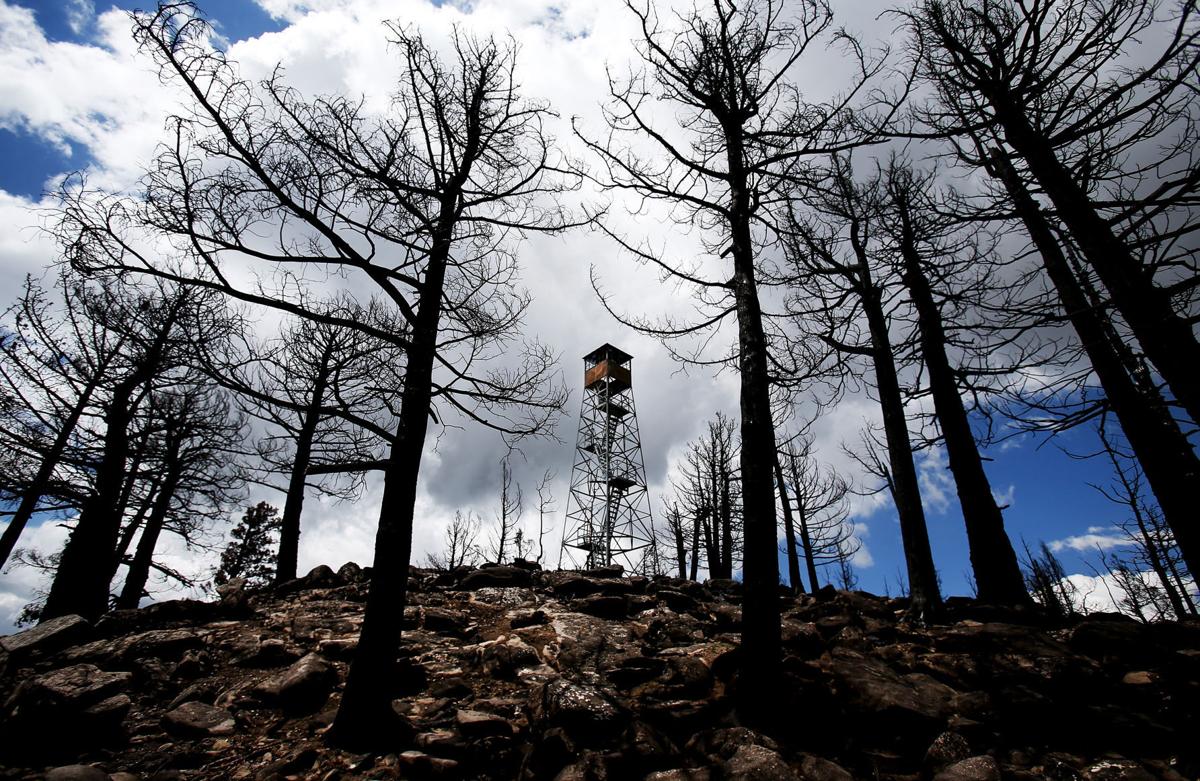 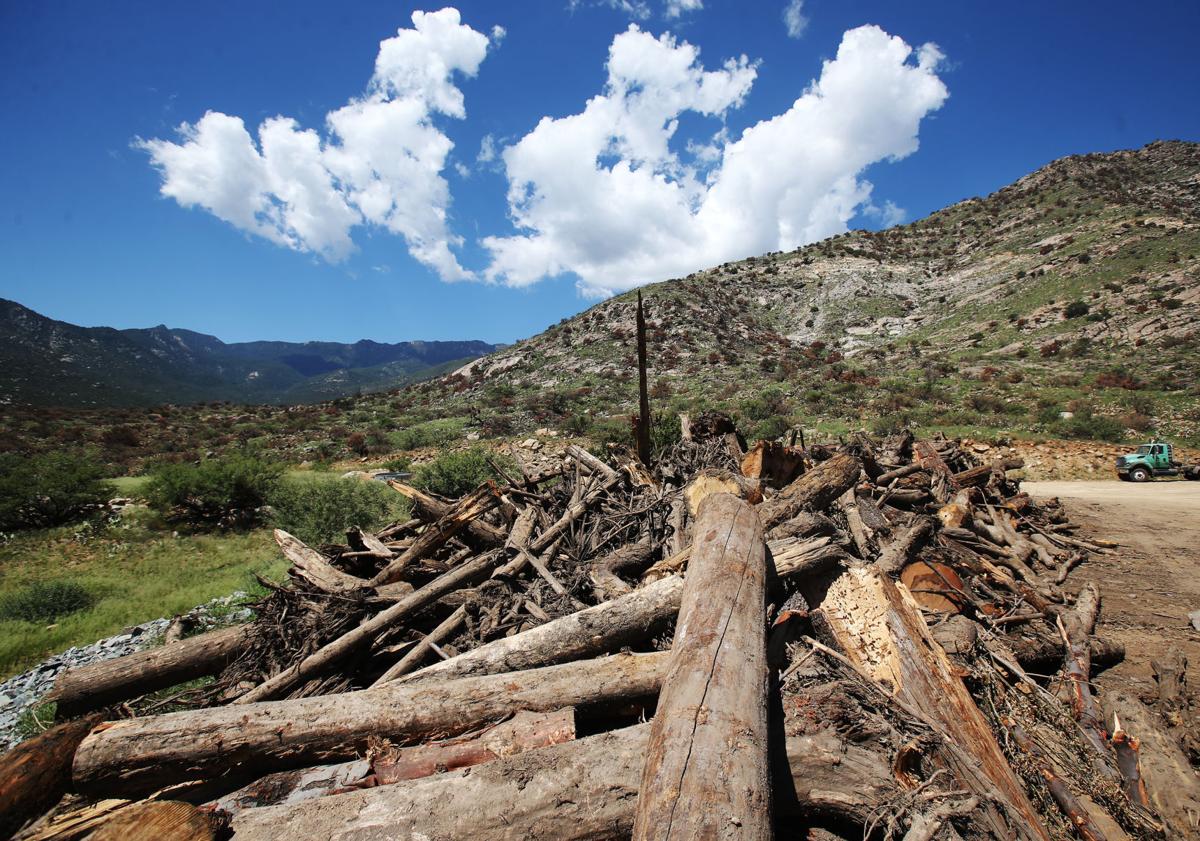 Heaps of debris collected by the Forest Service from Wet Canyon are piled up along State Route 366 southwest of Safford. The debris was clogging natural water channels. 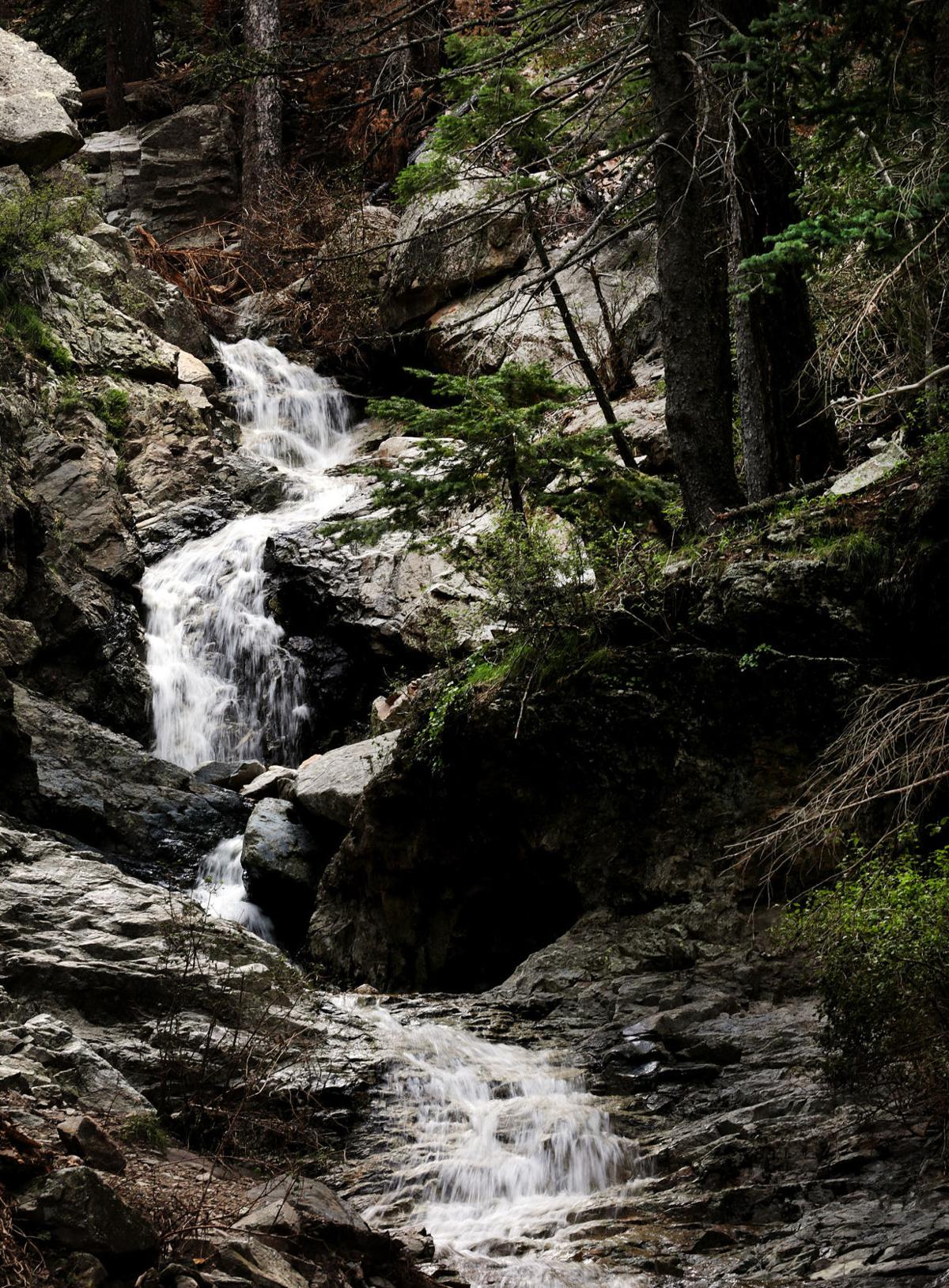 A waterfall cascades down a drainage along State Route 366 to Mount Graham southwest of Safford, Ariz. on Aug. 9, 2017. The U.S. Forest Service Burned Area Emergency Response mitigates erosion and flooding associated with burned-out areas in addition to re-seeding efforts. 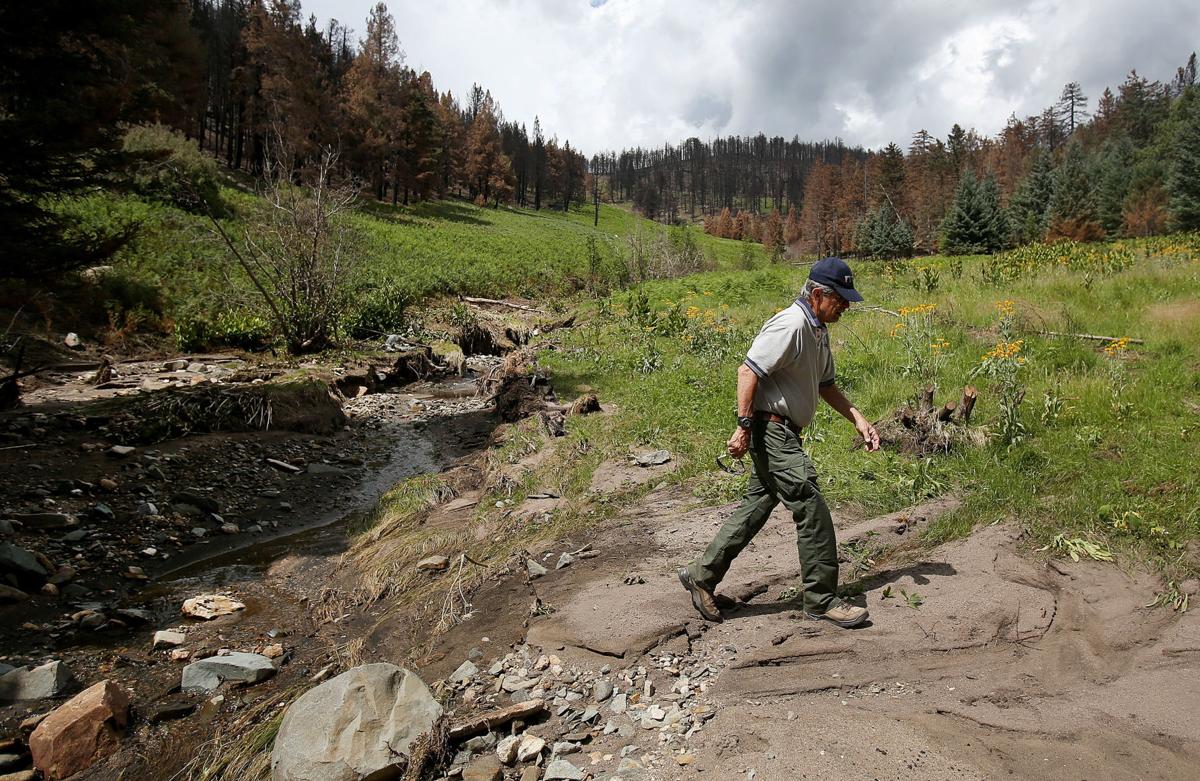 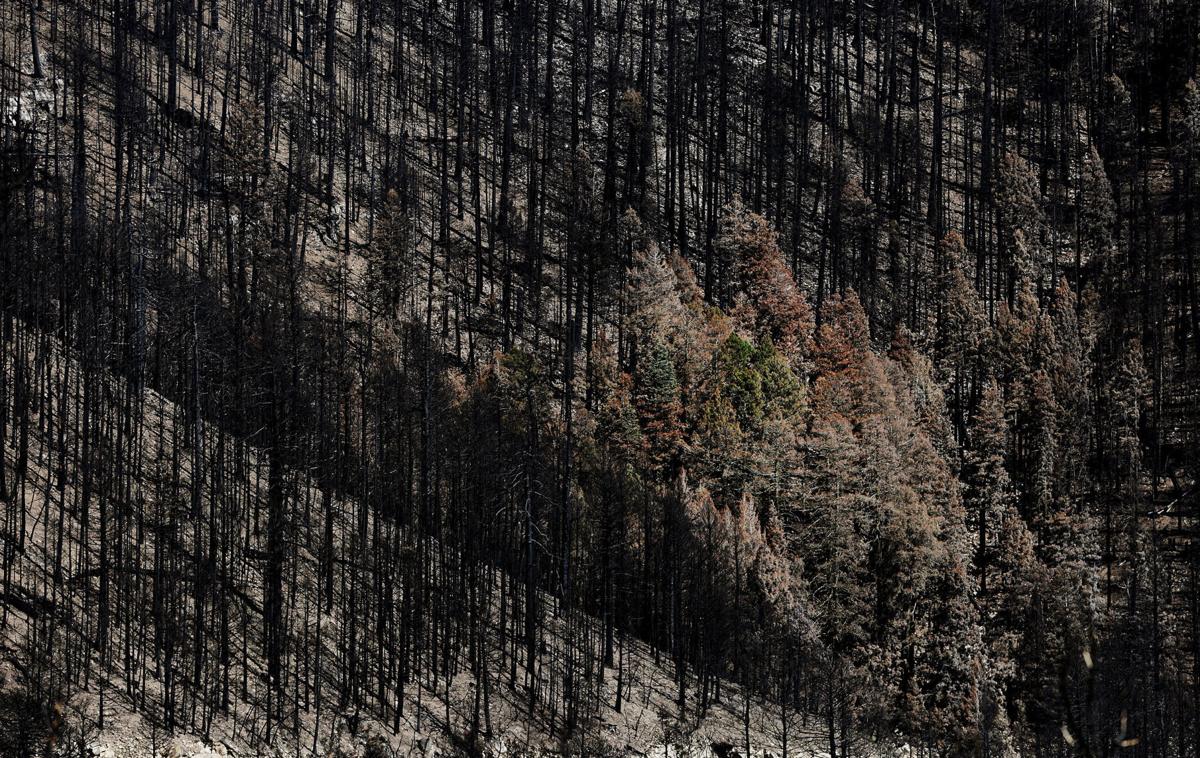 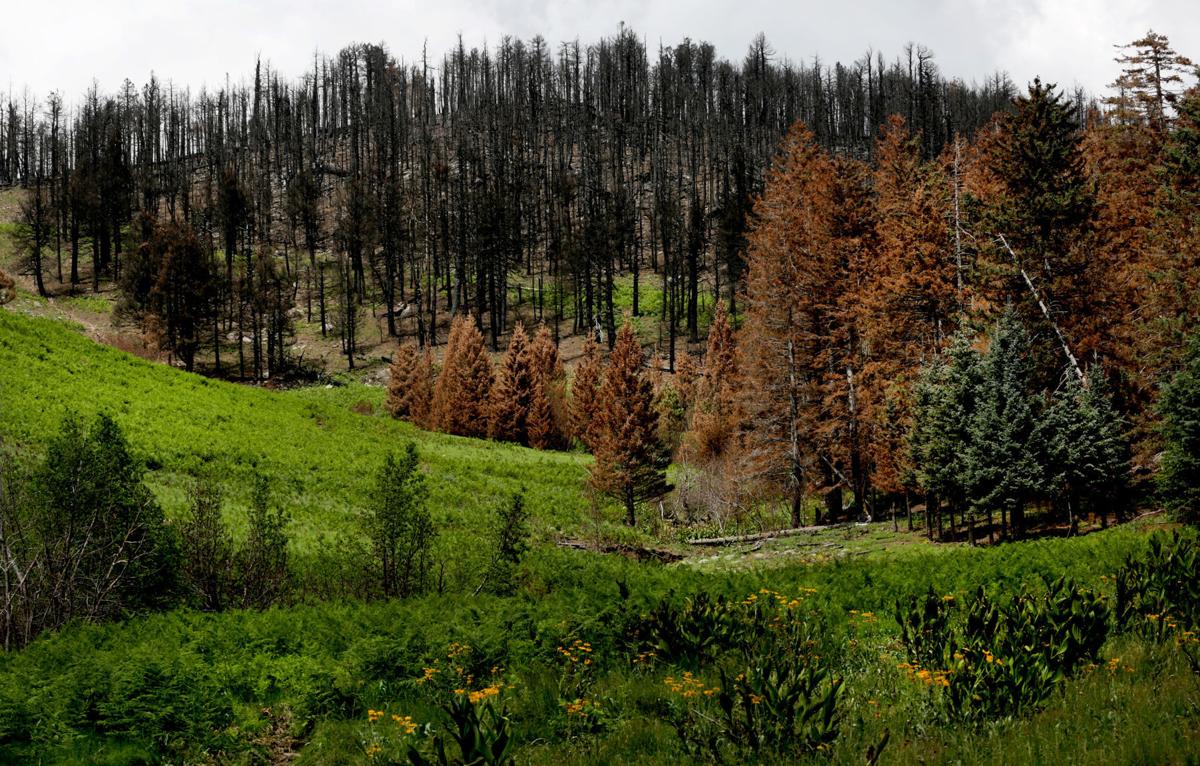 A rainstorm in an area burned by the Frye Fire in 2017 could spur severe runoff and close the only highway up Mount Graham.

The towering Pinaleño Mountains near Safford were ravaged by fire, then scoured by flooding this summer — and now restoration experts are working to stabilize and restore the tortured landscape.

The Frye Fire, ignited by a lightning strike on June 7, blackened more than 48,400 acres in the popular range surrounding 10,717-foot Mount Graham.

Monsoon rains helped douse the fire, but they also brought flooding that damaged roads and campgrounds and clogged drainage channels with logs and other woody debris. Observatories on the mountain and other structures escaped damage.

Bottom line: The range — from chapparal regions at lower elevations to pine and fir forests on the mountain heights — were left in need of immediate stabilization and long-term restoration.

Members of the Burned Area Emergency Response team (BAER) have been hard at work since the fire was contained in late July. BAER teams are used by the U.S. Forest Service to manage post-fire response actions on public land — and in this case, the team’s task is huge.

“This is a long-term issue — not something we’ll solve this fall,” said Dean McAlister, a member of the BAER team. “Restoration work on the mountain will go on for several years to come.”

Heidi Schewel, spokeswoman for the U.S. Forest Service, said work will run the gamut from protecting and restoring a functioning watershed to making fire-affected trails and campgrounds safe for a resumption of public use.

“It’s not the end of the story when a wildfire is out,” Schewel said. “There’s a lot of work to be done up there, and it will take some time.”

Several key areas of needed work have been identified and some work is underway, McAlister said. They include:

Swift Trail, the main road into the Pinaleños, has been cleared and opened to Ladybug Saddle. The saddle is about 25 miles up the road from its starting point along U.S. 191 south of Safford. The road opening allows public access to Arcadia Campground, the Turkey Flat summer home area and other sites, but areas above the saddle remain closed to public access.

“On a given day, we have maybe 20 people working up here” — some of them operating heavy equipment such as a grader, a loader, an excavator and dump trucks, McAlister said.

“In the Wet Canyon area, crews have been working for the past two weeks to clear debris from the area,” he said. “It was a popular recreation area, but recreational facilities disappeared with the first flood through the canyon. Woody debris formed a logjam in the canyon.”

Schewel noted that an area of special concern was a culvert and bridge on the Swift Trail at Wet Canyon. The culvert was built by Civilian Conservation Corps workers during the 1930s.

“Floodwaters and debris exceeded the capacity of the area around and between the existing and old culvert/bridge at Wet Canyon,” Schewel noted in a news release.

The flooding debris damaged the highway bridge and threatened one of the foundations, she said.

“Loss of a foundation would result in bridge failure and loss of road access to the mountain,” Schewel said. “The only feasible solution in the short term was removal of all or the vast majority of the Civilian Conservation Corps-era stone masonry culvert/bridge at Wet Canyon.”

The removal of the old culvert structure would result in a clear stream channel that could handle the stream flow and debris of boulders, wood and ash without damaging the nearby highway bridge, Schewel said.

Removal of the old structure was completed this week. Schewel noted that Forest and Arizona Department of Transportation officials plan to meet with the public in the near future to discuss possibilities for commemoration of the structure.

Removal of the culvert and continuing work elsewhere along the Swift Trail have increased restoration expenses.

McAlister said approximately $300,000 was allocated for restoration work so far.

“We will be making an additional funding request” to continue necessary work, he said.

A lightning strike ignited the Frye Fire on Mt. Graham in the Pinaleño Mountains on June 7, 2017 in the old burn scar of the 2004 Nuttall Comp…

The BAER (Burned Area Emergency Response) team from the U.S. Forest Service has been working in the Coronado National Forest on Mt. Graham and…

The Lizard and Dragoon Fires, which merged in the Dragoon Mountains in June, 2017.

Telescopes perched on area mountains were all at least potentially threatened during this season’s wave of wildfires.

Forests of the Catalinas: Unburned and beautiful

Scenic forests in the Catalina Mountains escaped damage from a recent wildfire.

As a result of climate change, monsoon storms in Central and Southwestern Arizona are becoming less frequent, but more intense.

Monsoon rains have nurtured a summer bloom of wildflowers around urban Tucson.

Cooler temperatures and storm activity will return this weekend.

Cable and fencing will be installed to preserve the area's resources.

Parts of Pantano Wash cleared of vegetation to control flooding

The fire burned 48,000 acres on the mountain over the summer.

For weeks, the world's largest firefighting aircraft in the world lay in wait at a secluded airplane hangar outside of Tucson.

The lawsuit by the Tucson-based Center for Biological Diversity has an ultimate goal of removing 14 cabins and an abandoned Bible camp's infrastructure from the endangered squirrel's habitat on the eastern Arizona mountain.

A crew from Aero Tech out of Clovis, New Mexico, reloads a plane that will scatter 2,500 pounds of barley seed over areas scorched by the Frye Fire.

Heaps of debris collected by the Forest Service from Wet Canyon are piled up along State Route 366 southwest of Safford. The debris was clogging natural water channels.

A waterfall cascades down a drainage along State Route 366 to Mount Graham southwest of Safford, Ariz. on Aug. 9, 2017. The U.S. Forest Service Burned Area Emergency Response mitigates erosion and flooding associated with burned-out areas in addition to re-seeding efforts.

A rainstorm in an area burned by the Frye Fire in 2017 could spur severe runoff and close the only highway up Mount Graham.