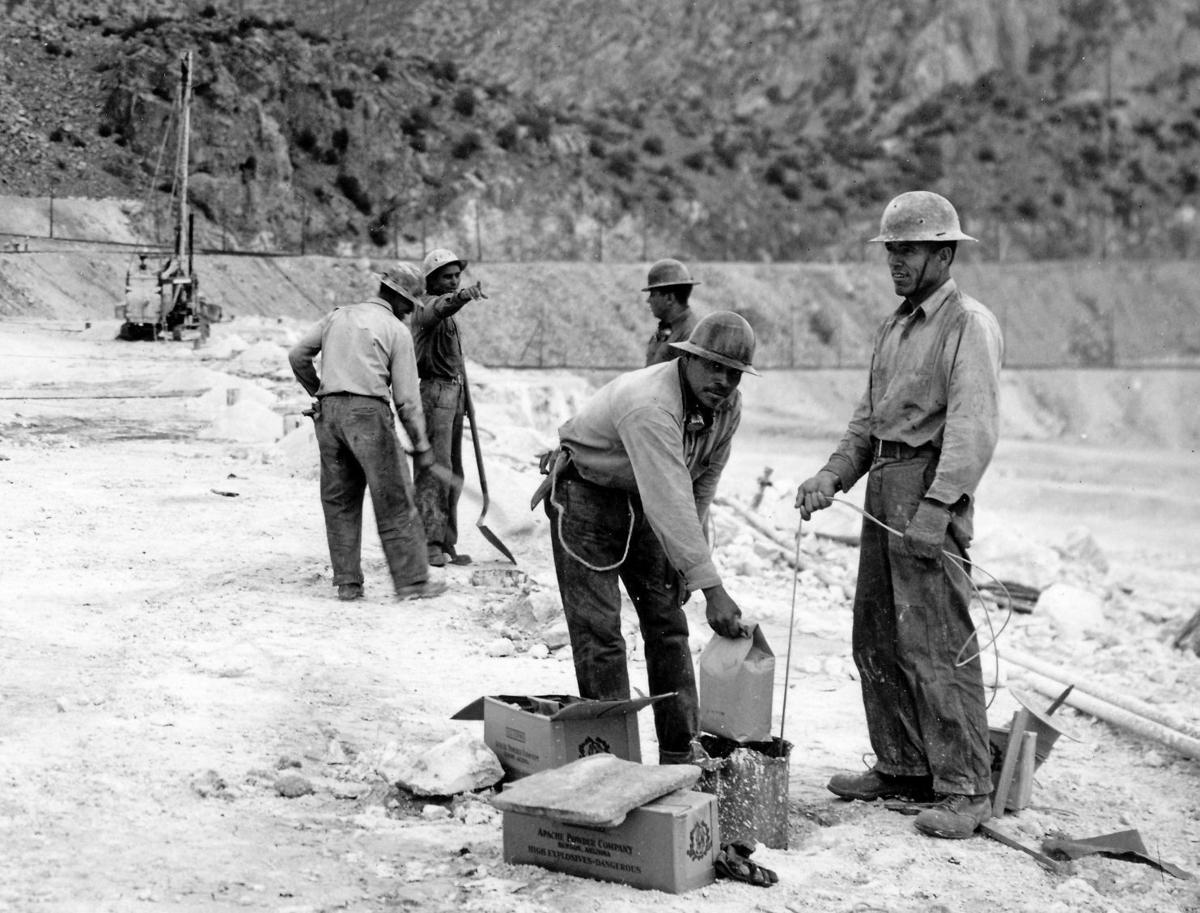 Miners fill drill holes using Apache Powder dynamite at the Morenci Pit on the Clay ore body in May 1944 in Morenci. 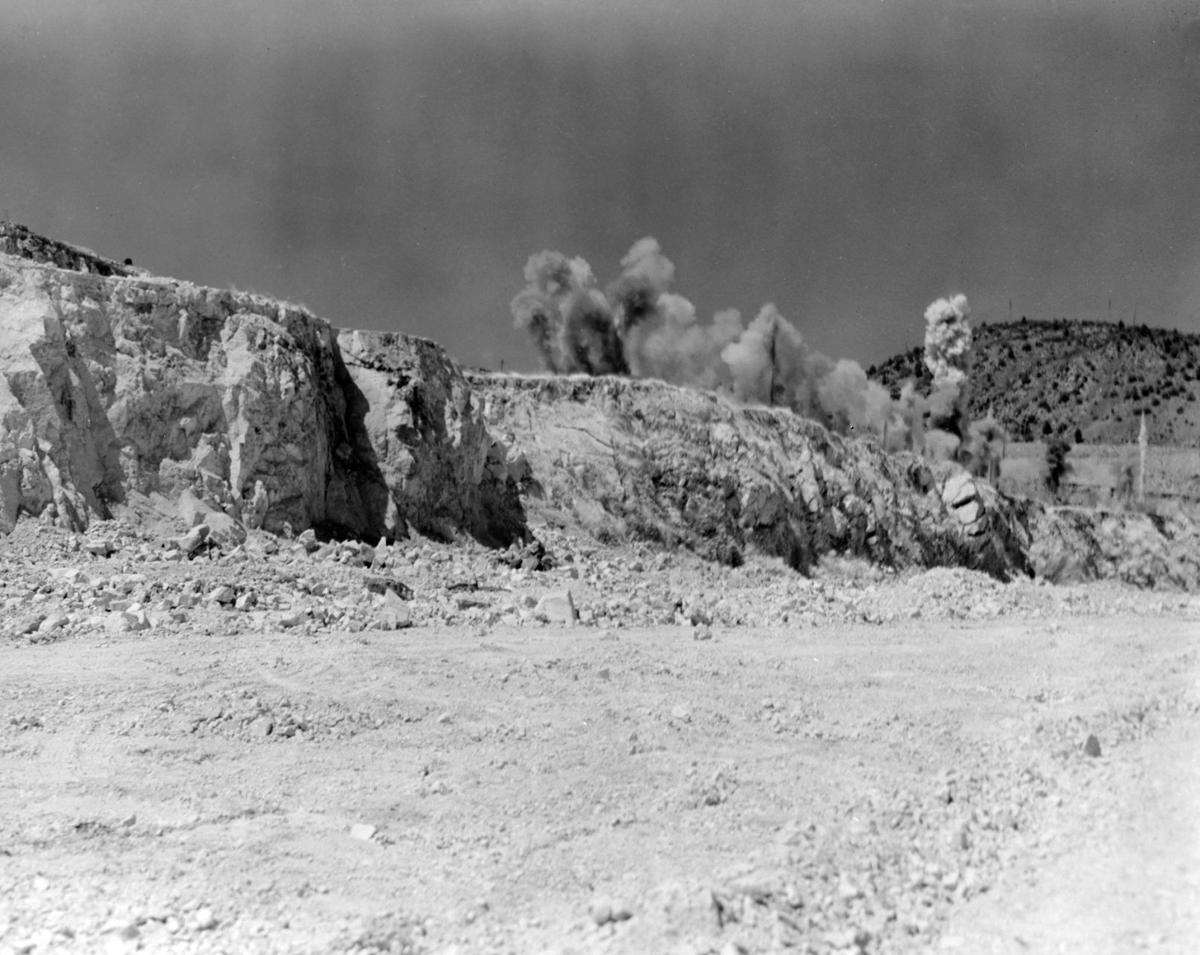 Smoke from a dynamite explosion rises over the Morenci Pit on the Clay ore body in Morenci in May 1944.

One of the great technical breakthroughs in late 19th century mining occurred with the introduction of nitroglycerin, a colorless, earth-shattering liquid used initially in quarrying.

Nitro, a high explosive five times as powerful as black powder, was known for its volatile characteristics. These were attributed to its speed of decomposition, making it less desirable and unsafe because of its ability to become unstable through the slightest jolt or friction.

Swedish chemist Alfred Nobel tamed the instability of nitro by adding it to inert fillers — including sawdust — giving it the appearance of a fat paper candle he christened dynamite.

A pinch of fulminate of mercury or another supersensitive explosive was added at the base to instigate the shock necessary for detonation.

There was also the ability to alter the nitroglycerin percentage to compensate for the strength of the rock to be blasted. Ease of handling made dynamite the preferred choice among miners to move more rock with more precision and with less expense and time.

The Apache Powder Co. was incorporated on June 11, 1920, by a conglomerate of mining companies in the Southwest as a means of decreasing the excessive market price of explosives. The company became the largest single plant for the manufacture of dynamite in the United States.

Located near St. David, the company was heavily involved in supplying explosives to the mining industry.

The extensive operation grew to 140 buildings on more than 700 acres, employing several hundred people and making it one of the largest employers in Southern Arizona.

Hilly terrain allowed for a natural separation of operations in explosives manufacture. The dry climate also aided in the production of high-grade powder.

A housing district was established by Apache Powder to accommodate its employees. Built in Benson during the mid-1920s, the district covered 4.3 acres and included a collection of Craftsman bungalow houses.

Charles Mill, a mining engineer with prior association to the Copper Queen Mine in Bisbee, assumed the role as the company’s first president.

The first venture involved the production of black-powder-based explosives, and by the late 1920s evolved into nitroglycerin production.

The El Paso & Southwestern Railroad serviced the company’s transportation needs with a 6,986-foot spur from Curtiss station to the Apache Powder Works.

The narrow-gauge railroad used mule-drawn cars as its locomotive.

Later, a “fireless” locomotive, manufactured by the H.K. Porter Co. of Pittsburgh, provided greater horsepower. It relied on an insulated steam reservoir rather than a conventional boiler that emitted sparks, which could prove deadly when hauling dynamite.

Onsite movement of dynamite involved the Angel Buggy, which could carry up to 400 pounds of nitroglycerin.

The vehicle looks like a barbecue grill on wheels and was aptly named. That’s because any bump in the road causing sudden movement might set off an explosion, and the driver would become an angel.

By the mid-1950s, the company produced over 41 million pounds of explosives that were used in mining operations.

Apache Powder was the only producer of nitroglyercin-based explosives in the Southwest.

Changes involving the company included the closure of its nitroglycerin production and a refocus on the production of ammonium nitrate blasting agents and nitric acid in 1983.

The company was renamed Apache Nitrogen Products Inc. in 1990, reflecting its emphasis on the nation’s mining and agricultural needs.

In 2010, the company invested $5.5 million in upgrading its prill operations, involving spherical pellets used as a solid oxidizer ingredient for explosive compositions.

A historical landmark in Cochise County, the story of Apache Nitrogen Products Inc. continues to be written. Its past is documented by former employees and archived at the Benson Museum.

A display of the original walkway, an Angel Buggy and other artifacts from the company’s early years is scheduled to open at the museum in the fall.

. His other books are “Chiricahua Mountains: History and Nature,” “Southeastern Arizona Mining Towns,” “Zenith on the Horizon: An Encyclopedic Look at the Tucson Mountains from A to Z,” “Tucson Mountains,” “Arizona-Sonora Desert Museum” with Peggy Larson and “Sentinel to the North: Exploring the Tortolita Mountains.” Email Ascarza at mining@azstarnet.com

Mine near Gila Bend best-known for its wulfenite specimens

Rowley Mine is located in the Painted Rock Mining district.

The Aravaipa and Stanley mining districts include the Santa Teresa, Turnbull and southeast end of the Mescal Mountain ranges

Miners fill drill holes using Apache Powder dynamite at the Morenci Pit on the Clay ore body in May 1944 in Morenci.

Smoke from a dynamite explosion rises over the Morenci Pit on the Clay ore body in Morenci in May 1944.