Several speakers delivered it Monday night at a community forum for TUSD families concerned about threatened magnet programs. The event was put on by Casa Maria Soup Kitchen at El Casino Ballroom.

The basic idea: That the district can’t comply with integration requirements for its magnet schools because the district has changed so much since the desegregation suit was filed in 1974.

“Times have changed,” U.S. Rep. Raúl Grijalva, a former TUSD board member, said at the event. “It is a majority-minority district, where the mix-and-match equation doesn’t apply as readily as it used to.”

His daughter, the current TUSD board President Adelita Grijalva, put it this way: “I do think it is important to note that since this court order began nearly 40 years ago, the demographics of our districts have changed significantly. We are over 70 percent minority, and it is very difficult to reach some of these objectives given that some of the neighborhoods are 99 percent minority.”

Yes, the desegregation suit did begin 41 years ago, and it is Tucson’s shame that it’s still going on. But the specific integration measures that the Grijalvas and many parents are complaining about? They are less than three years old.

In fact, most of today’s TUSD board — Grijalva herself, Mark Stegeman and Michael Hicks — were members of the board that approved the Unitary Status Plan on Dec. 11, 2012. That plan included the key measure that Grijalva, Superintendent H.T. Sanchez and many parents are contesting: That magnet schools must have no more than 70 percent of their students from any individual ethnic group.

If they exceed that maximum, they should lose their funding, Special Master Willis Hawley, who is overseeing the case, insists. So who’s really to blame for the threats to some of the district’s 20 magnet programs?

Sanchez and the board majority would have TUSD parents believe the blame lies with Hawley, the plaintiffs in the lawsuit and U.S. District Judge David Bury. Don’t believe them.

The organizers of Monday night’s event even put chairs on the stage for seven people, only two of whom ever planned to show up: Adelita Grijalva and Sanchez. The other chairs were labeled for Sylvia Campoy, who is the representative of the Latino plaintiffs; Ruben Salter, the attorney who represents African-American plaintiffs; MALDEF, the civil-rights law group that is suing on behalf of Latino students; Hawley and U.S. District Judge Bury.

The implication, of course, was that those who didn’t show up to occupy their chairs didn’t care. And yes, they actually shamed a judge that way — a judge who has no business showing up to a forum about one of his cases.

“The special master and MALDEF and the plaintiffs’ rep have all declined to be here tonight,” Ochoa parent Cesar Aguirre told the crowd Monday night. “I find that very disrespectful — that the people who are supposed to be representing us, who are supposed to be fighting for our kids, refuse to come down here and talk to us and listen to us.”

This is a message that the leadership of TUSD has been sending deliberately, board member Michael Hicks charged in a Nov. 2 letter to Bury. Hicks, who is a member of the board’s two-member minority along with Stegeman, told Bury he felt he needed to send the letter separate from other board members because otherwise his point of view isn’t reflected in court filings.

Describing the atmosphere in TUSD, Hicks wrote: “Culpability has become a constant theme in all issues concerning the desegregation court order, well beyond the magnet schools.”

“The Court, the Special Master, and the Mendoza and Fisher Plaintiffs are often criticized, which has created resentment and division within the district against the USP (the Unitary Status Plan) in general. The attacks have most recently become much more personal in nature.”

Campoy has become one of the key targets. She is not a lawyer but has been involved in the case for decades, now serving as a representative of the Latino plaintiffs.

Lately, parents, board members and administrators refer to her obliquely as the “plaintiffs’ rep” and say she is outdated and out of touch. The reason? She insists on implementing the desegregation plan that TUSD agreed to in December 2012.

“Really what they want to do is shake up the USP and get rid of the integration component,” Campoy said. “Achievement and integration are the two primary pillars. You have to have both — one is not more important.”

If parents of threatened magnet schools want to blame somebody for it, blame the district that has dragged its feet all these decades and now is running a campaign of misinformation.

U.S. District Court Judge David Bury will have the final say on the matter.

Unless local Republicans ensure ward-only elections, a new system might not help.

TUSD student code of conduct to be ready for next school year.

Cesar Aguirre, the father of an Ochoa Community Magnet School student, argues that TUSD magnet schools should be judged on whether student ach…

After federal sentencing changes, one man who served 22 years was released.

Steller: After loss, time for a new approach to bonds

Pope Francis jokes about needing tequila for his hurt knee

Pope Francis jokes about needing tequila for his hurt knee 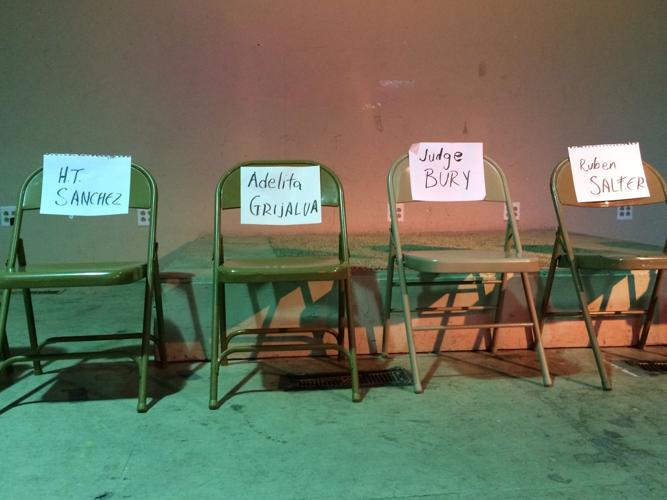 The organizers of a community forum set up seven chairs for people whom they invited to the event Monday night on TUSD magnet schools. Only Superintendent H.T. Sanchez and board president Adelita Grijalva were actually expected to attend.