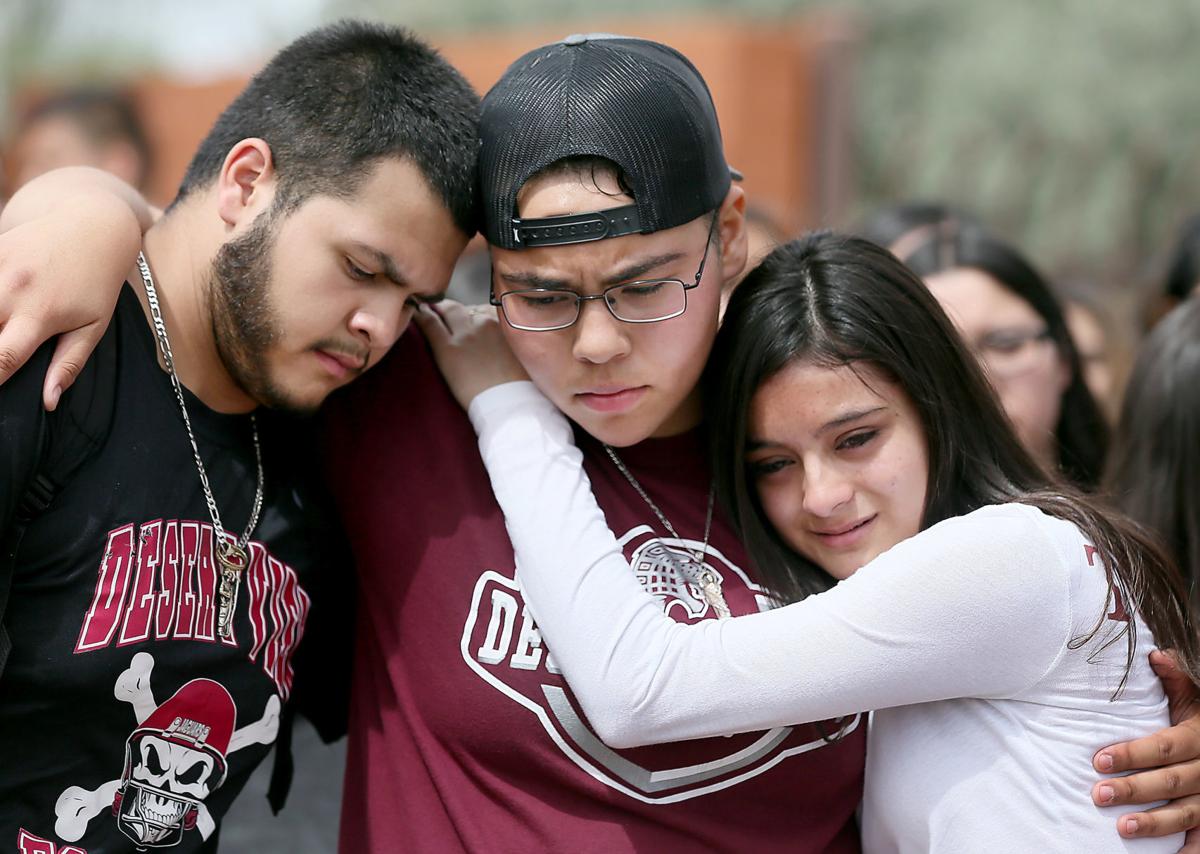 From left, Marcell Ibarra,18, Daffne Anselmo, 16, and Jamilet Fragoso, 16, comfort one another during a march to protest the detainment of Thomas Torres, a fellow Desert View High School student who was taken into custody last week by the Border Patrol after a traffic stop. 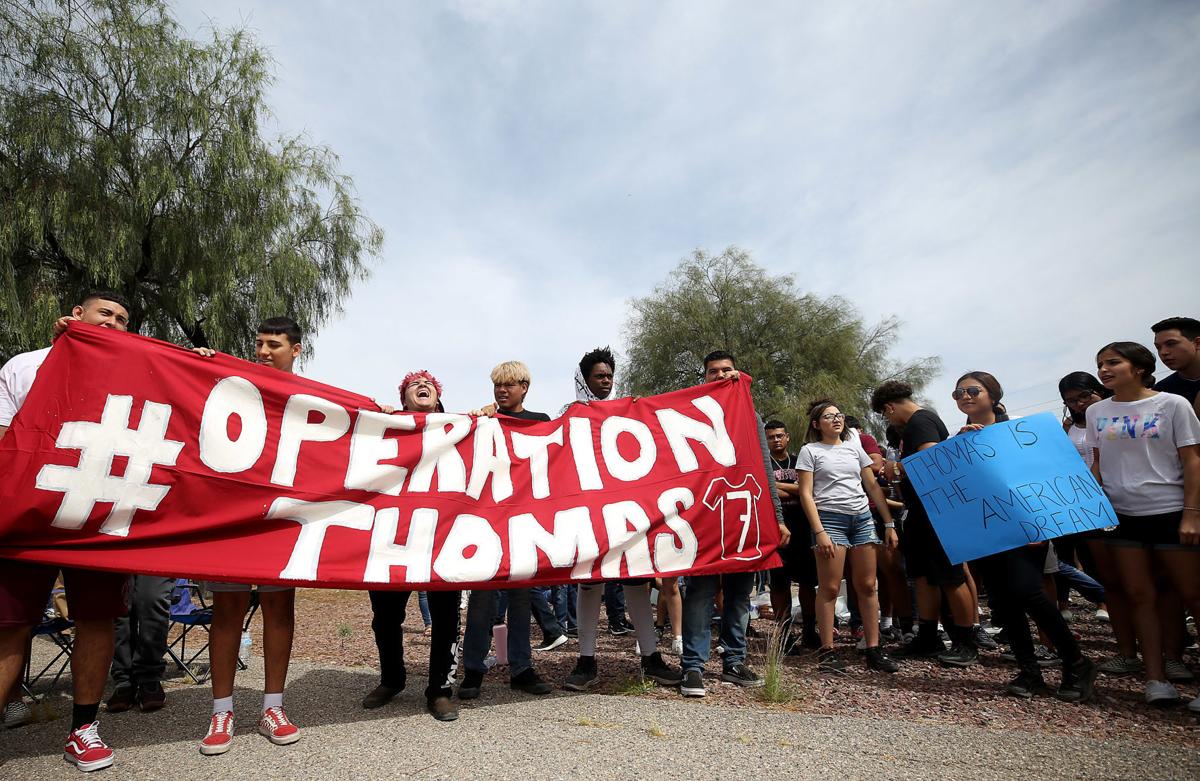 “We feel that threat that any of us can be taken at any moment,” student Daffne Anselmo said as Desert View High School students protested at the Pima County Sheriff’s Department.

Marcell Ibarra, a senior at Desert View High School on Tucson’s south side, wants his best friend, his “ride or die,” back, he told a group of reporters on Monday morning.

“He’s working his behind off to be graduating,” Ibarra said of classmate Thomas Torres, who is only two weeks away from donning a cap and gown.

It is uncertain whether Torres, 18, will graduate with his friends, though. The teen was detained by the Border Patrol on Thursday after being pulled over by a Pima County sheriff’s deputy in a traffic stop just before 10 p.m.

Torres may have a court date for May 22 — the same day he is supposed to graduate, according to Sunnyside Unified School District spokesman Victor Mercado.

“He has my back and I have his,” Ibarra continued. “He needs to be back. … This shouldn’t be happening.”

The students marched holding handmade signs and Mexican flags to the Sheriff’s Department from Desert View — a more than 4-mile walk, according to Google Maps — to protest their friend’s detainment and demand he be released from Border Patrol custody without a bond, immediately.

“Because we as students can’t afford to pay it,” Desert View senior Jamilet Fragoso, one of Torres’ friends who organized the march, said through a megaphone.

Two of Torres’ friends, Ervyn Rivas and Louis Escalante, were in the car when Torres was pulled over in front of the Dollar General store on East Drexel Road and South Alvernon Way.

The officer didn’t tell the boys why he pulled them over, they told the Arizona Daily Star.

A sheriff’s report, however, says Torres was told the reason for the stop: The deputy ran a check on the blue Kia Spectra and found that the vehicle registration had a mandatory insurance suspension. The registration was also expired, the report said.

Torres did not have identification or a driver’s license, he told the deputy.

He was also unable to produce a Social Security number.

The officer asked Torres if he had been drinking or using drugs — there were two empty cans of Mike’s Hard Lemonade visible in the car, which the boys said belonged to someone else — and asked him to get out of the car to take a sobriety test.

The deputy noted in the report that there was a “very slight odor of intoxicants emanating from the general area of the vehicle.” However, Torres passed the field sobriety and breathalyzer tests.

The deputy cited Torres on civil charges including displaying a plate suspended for financial responsibility, no mandatory insurance, no valid driver’s license and no current registration, according to the report. Arizona does not issue licenses to people who are in the county without authorization.

Despite providing his name and date of birth , Torres was repeatedly questioned about his identity and eventually admitted to being undocumented, the report said.

The Sheriff’s Department then contacted the Border Patrol. SB 1070, a 2010 state law, requires Arizona law enforcement officers to call immigration authorities if they suspect someone they have stopped is in the country illegally.

“It’s an obligation and a procedure,” said Pima County Sheriff Mark Napier. “If a person admits to being in violation of federal immigration law, I don’t expect (deputies) to look the other way.

“I believe our deputy did exactly what he should do and acted in a reasonable and appropriate manner.”

Torres was seated in the back of a patrol vehicle while waiting for Border Patrol agents to arrive.

“They (the police and Border Patrol) didn’t do anything with us,” said Rivas, who waited with Torres for over an hour before the Border Patrol detained him. “We were just worried about him.”

Lorena Rodriguez, a family friend who launched a GoFundMe page to raise money for Torres’ legal costs, said the teen was a toddler when his relatives moved from Mexico to the U.S. “to seek a better future,” according to The Associated Press.

Rodriguez said Torres’ family had long since returned to Mexico and he had been living with her family as a close friend of her brother, who also is scheduled to graduate.

The vehicle Torres was driving was registered to Lorena Rodriguez.

At the protest, a handful of Torres’ best friends spoke to his character as his peers stood behind them in solidarity.

Torres, who plays football at Desert View, is a down-to-earth, kind person whom everybody gets along with, they said. He works hard to do well in school. After graduating, he wants to study to be an electrical engineer, Ibarra said.

“This shouldn’t be happening to him,” Ibarra repeated.

This shouldn’t be happening to any undocumented person, said one of Torres’ good friends, Daffne Anselmo.

“We feel that threat that any of us can be taken at any moment,” Anselmo said.

That’s the other reason the students protested outside of the Sheriff’s Department: Not just for their friend, but for Tucson’s immigrant and Latino communities.

“We shouldn’t be worried about ending up in jail or prison after school,” Anselmo said to the crowd through a megaphone.

“We look different, but we’re all made the same.”

Though the students don’t have any other protest plans , they said they will continue to fight for the release of their friend.

“As far as it takes us,” Ibarra said.

Tim Steller and The Associated Press contributed to this story. Contact reporter Brenna Bailey at bbailey@tucson.com or 520-573-4279. On Twitter: @brennanonymous

Despite the changes, three Tucson-area high schools were named among the 50 best high schools in the country.

A decision to allow Arizona school districts to opt out of the statewide accountability test is in conflict with federal regulations.

TUSD is updating its dress code with "gender-neutral" language.

Police: DNA evidence leads to man being arrested in Arizona in 22-year-old slaying

CLARKSVILLE, Tenn. — Tennessee police say DNA evidence led to the arrest of an Arizona man in a 22-year-old unsolved slaying.

Teachers, parents at 23 Tucson schools will walk in, stand out in support of #RedForEd

The teachers and parents, affiliated with the group Arizona Educators United, want to remind the community, the state legislature and Governor Doug Ducey that many #RedForEd funding demands haven’t yet been met.

The Operation Stonegarden funds were approved under the condition that a portion be designated for humanitarian aid for asylum seekers.

A man suffered life-threatening injuries when struck by a truck along First Avenue on Tucson's north side Tuesday night, police say.

Letter: Re: the May 7. article “Desert View students protest Border Patrol detainment of classmate weeks away from graduation”

If you choose to stay in a country for a better way of life. Here is some free advice. Start the process to become a citizen, but if you loyal…

Though children from lower-income backgrounds are more likely to drop out than those from middle and upper-class backgrounds are, the issue can affect any student.

The mural, located on a wall across the street from Changemaker in the Naylor neighborhood, was defaced with swastikas, “phallic symbols” and anti-semitic and misogynistic phrases, according to school CEO Luis A. Perales. Tucson Police Department is investigating the vandalism because it involves hate speech, Perales said.

A teenager who was brought to the U.S. illegally as a child has graduated from high school in Tucson just weeks after federal officials detain…

From left, Marcell Ibarra,18, Daffne Anselmo, 16, and Jamilet Fragoso, 16, comfort one another during a march to protest the detainment of Thomas Torres, a fellow Desert View High School student who was taken into custody last week by the Border Patrol after a traffic stop.

“We feel that threat that any of us can be taken at any moment,” student Daffne Anselmo said as Desert View High School students protested at the Pima County Sheriff’s Department.