During hot Tucson summers, Ramadan fast a challenge
Share this
1 of 2 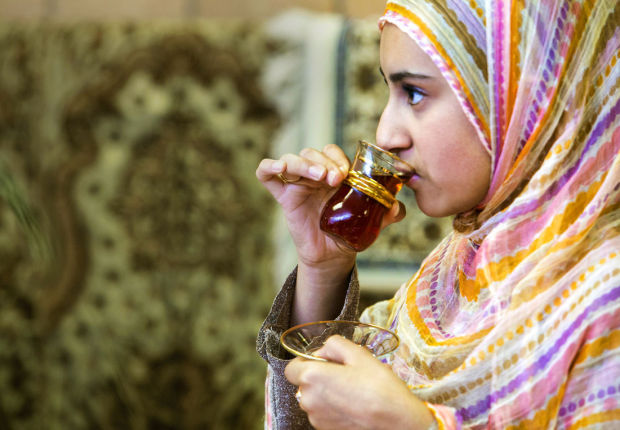 Sehrish Choudhary, 13, enjoys a cup of tea at an iftar dinner celebrating the day’s fast, at the Arabian Oasis Cultural Center, 2102 E. Broadway. ﻿ 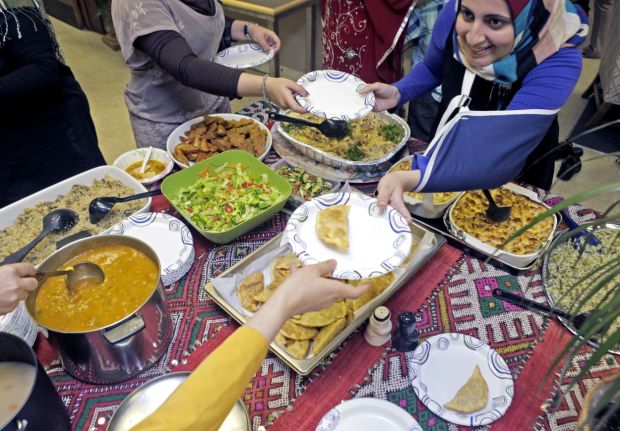 During the Muslim holy month of Ramadan, families come together at sundown at the Arabian Oasis Cultural Center to share traditional foods. ﻿

By Christa Elise Reynolds For the Arizona Daily Star

When the temperature tops 100 degrees, staying inside or guzzling water are about the only ways to get by.

But one of those options is off limits to many Muslims in Tucson, who are observing the Ramadan fast and cannot eat or drink until the sun goes down.

“It’s very tough. If I’m sitting at home and don’t go out, it’s perfect, but if you go out into the heat – that’s no fun at all,” says Ferial Malaiki, event coordinator at the Arabian Oasis Cultural Center, 2102 E. Broadway. When she sees women wearing traditional Muslim head coverings, she sometimes advises them to carry an umbrella to block the hot sun.

The fast is possible, she says, because of her belief. “It’s not easy but we do it. We don’t complain,” Malaiki says.

Fasting is twofold, explains Maksood Ahmad, who was born in Pakistan but has been a Tucsonan for about 40 years. The intent is to purify oneself and also to “experience the pain of a hungry person.”

“I don’t know about the first, but I do achieve the second!” Ahmad says good-naturedly.

An important part of the Ramadan celebration is iftar, or “the breaking the fast” meal. Held at sundown, the meal begins slightly earlier every day as daylight hours grow shorter.

A few dates and a glass of milk is the traditional way to begin iftar. Even one date can make a person feel pretty full after fasting all day, says Sehrish Choudhary, 13. She has been observing the Ramadan fast since second grade.

Fasting was difficult at first, but Choudhary says she adjusts. She tries to “think about how the needy feel, and live the experience of their lives” while fasting.

In order to avoid being out in the heat of the day, her family stocks up on groceries before the month starts.

For iftar at the Arabian Oasis Cultural Center, families contribute different dishes. Malaiki makes harira, a Moroccan soup found across the Arab world and, for dessert, kunaffa. This pastry has a creamy, cheesecakelike filling sandwiched by sweet, shredded dough. It’s her own secret recipe, coveted by many who have tasted the dessert, she says, but she refuses to give up her recipe.

It’s important to avoid eating salty foods when Ramadan falls during summer, Zena Khalel says. An immigrant from Iraq, she says her family celebrates Ramadan in Tucson just as they did in her home country. She likes to include watermelon in her evening meal because it is hydrating.

Ruaa Alkanan, another Iraqi immigrant, says it’s almost easier to fast for Ramadan in Tucson than it was in Baghdad. Although she misses her family in Iraq, the air conditioning that is ubiquitous here helps her stay cool during the day.

A midday shower also helps a fasting person cool off, says Ahmad. He explains how Muslims perform ablutions before praying five times a day, pouring water on their faces, hands and feet. That’s especially refreshing when temperatures are high, he says.

The difficulty of fasting depends on what a person does during the day, explains Sufyan Mohamed, another recent Iraqi immigrant.

“We’ve been used to fasting,” he explains. It is customary for Muslims to begin fasting when they reach puberty.

When Tubah Ahmad, 13, was younger, she would fast for half a day and then eat her breakfast around noon. “When your parents do it, it gives you the urge,” she explains. “It’s not really difficult if you’re not being forced to.”

For some, the month of Ramadan can be a time to adopt nocturnal schedules. Several kids at the cultural center try to outdo one another with how late they stayed up the night before. Omar, 11, won with his bedtime of 6 a.m. Sleeping until 3 p.m. makes it easier to fast until dusk, he says.

How did he stay up so late? Playing video games, he says.

Christa Elise Reynolds is a University of Arizona journalism student who is an apprentice at the Star. Contact her at starapprentice@azstarnet.com

Ramadan takes place during the ninth month of the Islamic calendar.

It is a time when Muslims fast during daylight hours, with the hope of attaining piety.

The Islamic calendar follows a lunar schedule, so each year Ramadan falls about ten days earlier.

Fruchthendler and Mesquite principals say their students’ exemplary performances on state standardized tests are a product of enriching experiences and targeting extra help to struggling students.

Sehrish Choudhary, 13, enjoys a cup of tea at an iftar dinner celebrating the day’s fast, at the Arabian Oasis Cultural Center, 2102 E. Broadway. ﻿

During the Muslim holy month of Ramadan, families come together at sundown at the Arabian Oasis Cultural Center to share traditional foods. ﻿