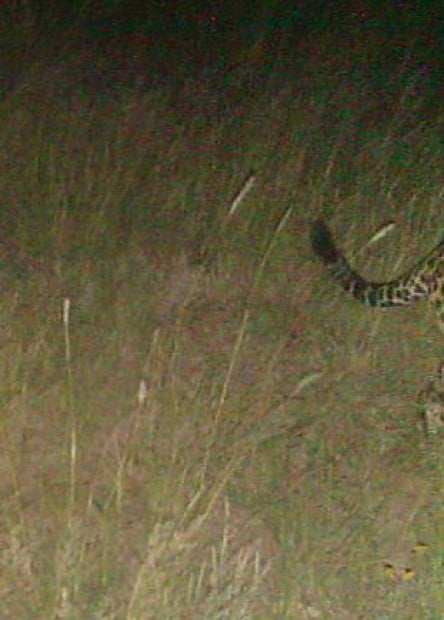 Arizona Game and Fish Department officials say outside experts agree with state biologists that a hunter’s trail camera captured an image of a jaguar late last month. It was sighted southeast of Tucson on Sept. 23. 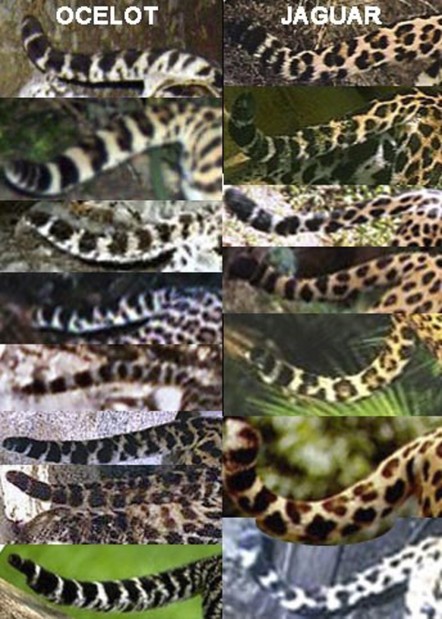 These photos of jaguar and ocelot tails are shown side by side for comparison. The photo arrangement was prepared by two biologists, Jeannette P. Hanby and J. David Bygott.

Arizona game officials are consulting with seven outside experts to determine if a photo recently submitted by a hunter shows the tail of a jaguar or an ocelot sighted southeast of Tucson.

While those experts’ conclusions aren’t in yet, two longtime cat biologists who work as volunteers for the Sky Island Alliance conservation group said Wednesday they believe it’s a jaguar.

The predominant opinion among those responding to the State Game and Fish Department so far is also that the tail is of a jaguar, “but it is not the only opinion,” said Eric Gardner, Game and Fish’s non-game branch chief. The U.S. Fish and Wildlife Service has reached out to an eighth expert, Gardner said today.

“We do have an individual who believes it is inconclusive, but if pressed would probably go the ocelot route,” Gardner said. “It’s still premature. Most of it is a lot of opinion without a lot of reasoning behind it, based on experience. We have some statements based on size and length of the tail and the bushy tip of tail. But it’s still being discussed in the professional arena. I think we have to let that discussion occur.”

Gardner said he hopes to have heard from all the experts by early next week.

“We have definitively determined that it is either a jaguar or an ocelot, but we need to do further analysis of the animal’s spot patterns and size to positively identify which species it is,” Gardner said.

Jeannette P. Hanby and J. David Bygott, the Sky Island volunteers, said the mystery tail shows a pattern typical in jaguars but not ocelots: A more irregular pattern of banding and spotting. The ocelot generally shows more regular banding and spotting, they said.

In addition, the mystery tail shows rosettes, clusters of two or more black spots that are linked by a darker brown area than the typical pelt’s pale, background color, Hanby and Bygott said. Jaguars very often have rosette patterns, while ocelots may show rosettes but not commonly, they said.

Hanby and Bygott, both holding doctorate degrees, spent 25 years in Tanzania working on various conservation, research, writing and education projects involving African lions and other matters. They’ve been volunteers with the Sky Island Alliance since 2008. Bygott first came to Tanzania in 1969 to work on a team studying wild chimpanzees that was run by Jane Goodall and financed by National Geographic, and later worked with Dian Fossey sketching gorillas. Hanby is a visiting scholar at the University of Arizona’s anthropology department.

Arizona Game and Fish provided the name of one of its experts: Howard Quigley, jaguar program director and Teton cougar project director for the global conservation group Panthera, which tries to create conservation strategies to protect jaguars and other highly endangered cats. Quigley, also a Ph.D. and former president of the University of Idaho’s Hornocker Wildlife Institute, has also directed the Wildlife Conservation Society’s global conservation program. Quigley was the only one to so far allow his name to be released, Game and Fish spokesman Mark Hart said.

In an email, Quigley said today that he is traveling, and not in the best position to make a call.

“From my laptop, here in the field, I don't think it's definitive, but I'll look at it properly next week when I get back to the office,” Quigley said. “Others are better set up right now to make the determination, if it's even possible. “

Overall, Game and Fish declined to say how many experts had responded so far, with Gardner saying he would prefer to let the scientific community develop an unbiased analysis on its own.

“For us to put out a number, to say how it’s going, biases that,” Gardner said. “We want the professional community to provide the best analysis. We want the best possible answer.”

Lisa Haynes, a longtime large-cat biologist here and coordinator of the UA’s Wild Cat Research and Conservation Center, declined to give an opinion on the photo, saying she’s referring all inquires to Game and Fish.

Jaguars and ocelots are listed as endangered species.

The Sky Island Alliance’s remote cameras have photographed an ocelot in Southern Arizona in 2009 and seven ocelots and two jaguars in northern Sonora since 2007.

On StarNet: See a video of a jaguar caught by a remote camera near the border at azstarnet.com/video

Arizona Game and Fish Department officials say outside experts agree with state biologists that a hunter’s trail camera captured an image of a jaguar late last month. It was sighted southeast of Tucson on Sept. 23.

These photos of jaguar and ocelot tails are shown side by side for comparison. The photo arrangement was prepared by two biologists, Jeannette P. Hanby and J. David Bygott.