Hospital rooms and ambulances aren’t the only places to find intravenous hookups in Tucson anymore.

Instead, for your next fluid drip, think IV lounges with reclining chairs or even a refurbished van.

Following a trend embraced by Hollywood stars who reportedly spend hundreds per dangling bag, people here are starting to use IV treatments — also called infusions — for hangovers, to enhance athletic performance or to improve their complexion.

Too many cocktails last night? A $150 bag is advertised as key to helping the body recover, with a “boost” for the liver and medications for nausea and pain.

Long hike in the blazing sun? Restore those electrolytes fast.

Beauty boost? Get those vitamins and minerals flowing.

IVs have long been used in emergency rooms and from hospital beds to treat dehydration, or to fight infection or cancer by tapping treatment right into the blood. It’s a way to help a patient with severe pain or dangerously low blood pressure.

But now, IVs are becoming more common as business ventures. That’s raising questions about regulation and whether the service offered is worth the pinch, both of the needle and to the wallet.

Anyone administering an IV in Arizona has to be trained and licensed to do so. All of the people interviewed for this story have medical backgrounds and are licensed or certified, and their clients speak well of the service.

However, the industry itself is not regulated in Arizona, either by the Arizona Board of Nursing, the Arizona Medical Board or the Arizona Board of Cosmetology. The state’s Department of Health Services does not oversee IV lounges because they do not meet the definition of a health-care institution, leaving it unclear how, or if, inspections would be carried out.

“Our office works closely with the Department of Health Services and other agencies to protect consumers and ensure safe practices are followed,” said Patrick Ptak, head of communications for Gov. Doug Ducey. “Should an issue require further regulation to protect people’s health and safety, we will take appropriate action as needed.”

Shirazi, who is also an emergency-room physician and medical toxicologist at Banner-University Medical Center, recalled how poor sanitation at a nail salon here led to an outbreak of MRSA, a staph infection resistant to antibiotics.

Considering that, he ranks IV drip lounges in the same category: mostly benign but potentially dangerous.

And while he agrees that those recovering from dehydration or food poisoning can find merciful relief from a saline drip, he is skeptical about how much good pumping vitamins and minerals into the blood really does for the average person.

It’s a topic of some debate.

Naturopathic physicians, for example, have long used IV drips to help patients with a variety of health challenges including nutritional drips for those who struggle to get enough nutrients because of compromised digestion. They also use this approach to help patients recovering from viruses, or struggling with migraines.

Every patient treated with an IV drip at Blue Oak is either screened there or referred by a doctor familiar with the patient’s history, she said.

Rescue Me Wellness opened a few weeks ago, an urgent-care facility with an in-house pharmacy run by three women: two former firefighters, Lisa Ritter and Jenny Jeong, along with a family nurse practitioner, Laura Thompson. Their medical director is Dr. Steve Rayle.

Part of that is an IV drip lounge where people who have been medically cleared — including a check for a rare deficiency that would turn a dose of vitamin C deadly — can get an infusion for a wide variety of things.

Ritter says her clinic, at 4601 E. Fifth St., is fully equipped to handle any sort of emergency that might arise from using an IV drip and that it follows the “highest standards” for both administering the IV and sanitizing the lounge.

Rescue Me Wellness has a special right now on “revive” bags, which are for rehydration and include all the B vitamins. This basic bag starts at $60 now, and normally goes for $130. For an additional charge, people can add extras like vitamins or antioxidants.

“When we created this clinic, what we wanted to do was empower patients,” said Ritter, who has been practicing as a certified physician assistant for 12 years. “That’s our mission.”

Ritter calls the IV drips “an adjunct to wellness.”

And that’s exactly how Chris Gage sees it.

Gage, a dedicated athlete, is transitioning to living in Tucson from California.

Training hard in a warmer climate has been challenging for her and so, since she’d already tried IV therapy in Long Beach, she sought out a new clinic here and picked Rescue Me Wellness.

“When I found out about their services, I hopped on their Facebook page and started reading about what they have to offer,” she said. “What was really appealing to me is their background in the medical field. They are not just capitalizing off of those having too many drinks.”

Gage uses electrolyte powders in her water, but says when she gets really depleted, an IV drip is key. She has used the revive drip, which contains potassium, calcium, lactate, thiamine, chloride and sodium.

“I definitely feel a huge difference immediately,” she said.

Dr. Robert H. Shmerling with Harvard Health Publishing says that while patient empowerment is a good thing, making IVs available to just about anyone who can afford it is not something he endorses.

“MRIs, ultrasounds and CT scans, recreational oxygen treatment, and genetic testing are among the growing list of options that were once impossible to get without a doctor’s order,” he wrote in an article published in September 2018. “Some of these services are much more about making money for those providing the service than delivering a product that’s good for your health.”

With saline bags costing as little as several dollars each, IV drip providers are often enjoying a significant profit margin.

Shirazi said that’s one of the things that concerns him: running drips as a business means some people might be tempted to skimp on cleanliness to make more money.

Medical equipment is costly, he said, so will some providers reuse the disposable IV line or needle rather than replace it? Since the procedure is invasive, with a needle being used to insert the catheter, this might expose people to infection.

“Who makes sure,” he said, “since there’s no regulation?”

Shirazi said he understands that people want to be more involved in making health-care choices, but cautions them to be careful about what they are putting in their body with any regularity.

And if people feel better after receiving vitamin and mineral drips, he believes it’s mostly psychosomatic, meaning the psychological benefit of getting the treatment influences how the body feels.

Revive Tucson is a nonprofit that was started here about 18 months ago and provides in-home IV services as well as a mobile IV lounge for groups or special events.

It sometimes provides wedding-goers with relief after a big bachelor party, or avails itself to concert attendees and performers alike as it did a couple of weekends ago at the West Coast Festival that was held here.

One Tucson father praised Revive Tucson online after he said it helped his daughter, a University of Arizona student who drank too much and was “vomiting profusely.”

One of the offerings for over-imbibing is called “Hungover AF — (Wake of Shame)” and, for $149, is advertised as being “ideal for total rehydration & rehabilitation.”

If photos on the organization’s website offer an accurate representation, it would appear most of its clientele are college students who drink too much.

But executive director Jodi Blanchard said about 80% of the people it serves are being treated for things other than hangovers, with many patients benefiting from in-home help.

Blanchard, a certified nurse practitioner in Tucson, started Revive after learning about services being offered in Las Vegas and recognizing an opportunity to bring a similar service here.

So far this year, it has provided IVs about 350 times around Tucson, including some drips to repeat customers.

The staff includes six registered nurses and two nurse practitioners, who all work part time for Revive while also holding other jobs. Tucson Dr. Abdul Khan is their medical director.

Everyone who participates completes a health history form first, and the providers conduct a basic health assessment, Blanchard said.

If there’s anything questionable or concerning, she said, they contact the person’s doctor for more information or, depending on what’s needed, recommend the person contact their doctor or seek out emergency services.

She has chronic health conditions that have compromised her immune system and make her extremely tired and rundown.

Some days she can’t accomplish even that much.

“When I run out of energy, I just collapse wherever,” she said. “I’m like your phone battery but I never charge more than 5%.”

Loehrer said she read a report over the summer on how regular IV treatment might be able to help with her debilitating fatigue.

She now gets a liter of what’s called a lactated ringer three times each week and pays $99 each time.

The drip is similar to saline, she said, but “differently balanced.” The mixture, which an online search shows is common for replacing fluids for people with low blood pressure or low blood volume, is typically a mixture of sodium chloride, sodium lactate, potassium chloride and calcium chloride.

Having people come to her house rather than having to go to a clinic or hospital is critical.

“Because I’m unable to drive or leave home without considerable pain and paralytic fatigue, a mobile IV was the only option for me,” she said.

“This is definitely cheaper than an ER.”

Does it help? She says yes.

“So far I have noticed an improvement in my ability to walk around my house without a walker and I feel more steady,” she said. “I also feel like my thinking is less fuzzy.” 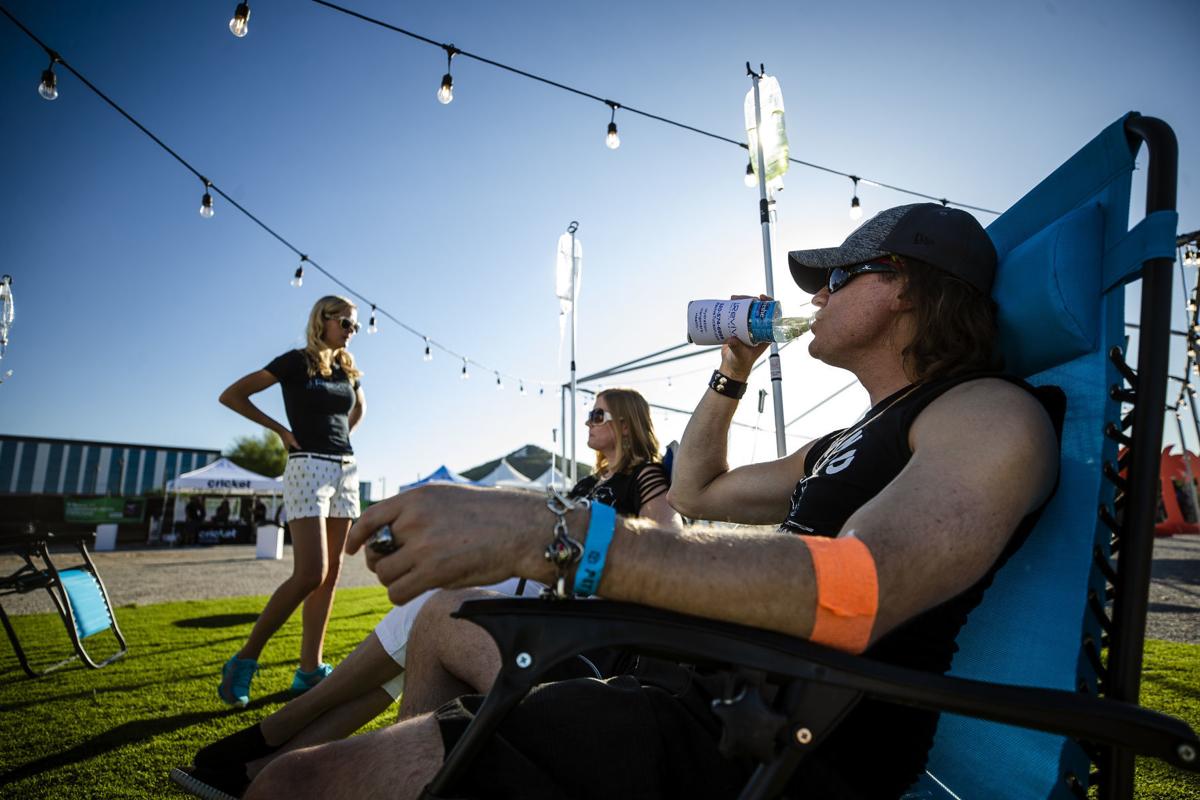 IV-drip services are springing up around Tucson. One of the companies, Revive Tucson, offers hangover relief in the form of a $149 drip therapy that is “ideal for total rehydration.” 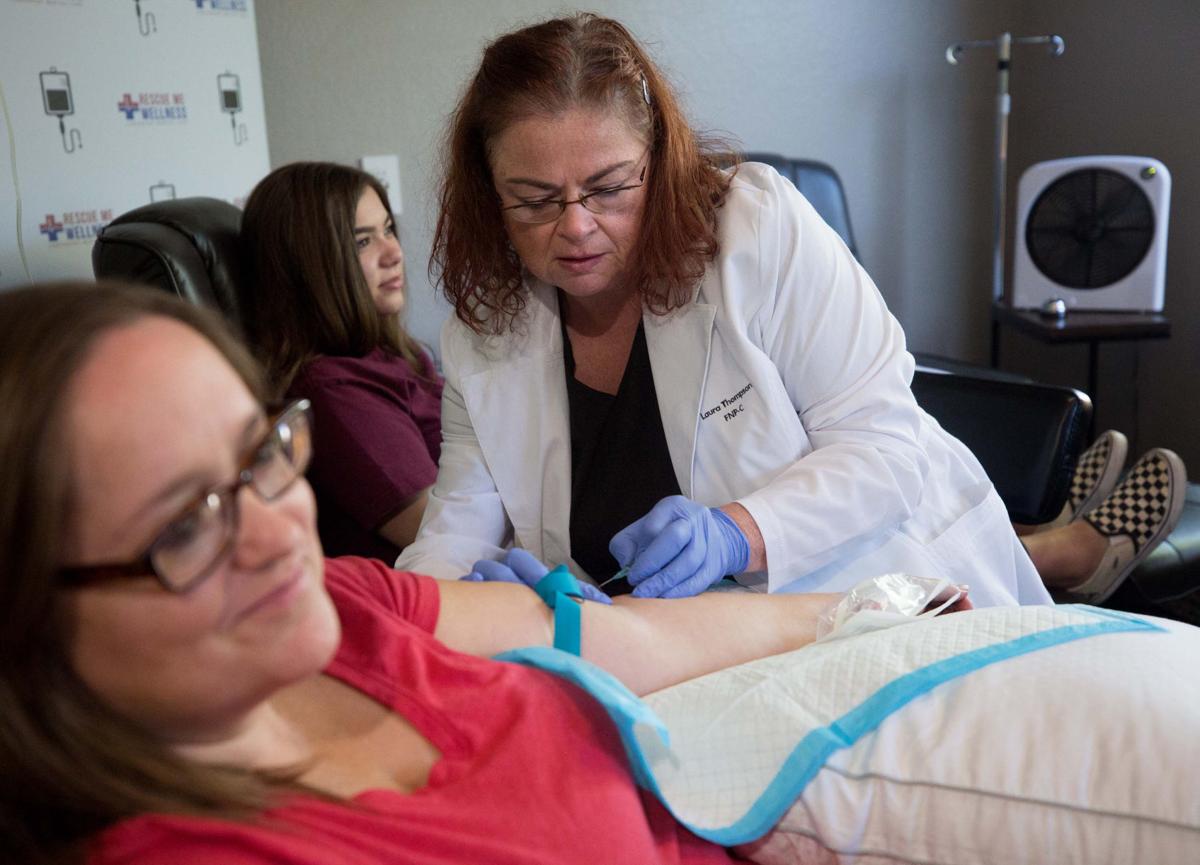 The IV industry is not regulated in Arizona, and the state’s health department does not oversee IV lounges because they don’t meet the definition of a health-care institution. 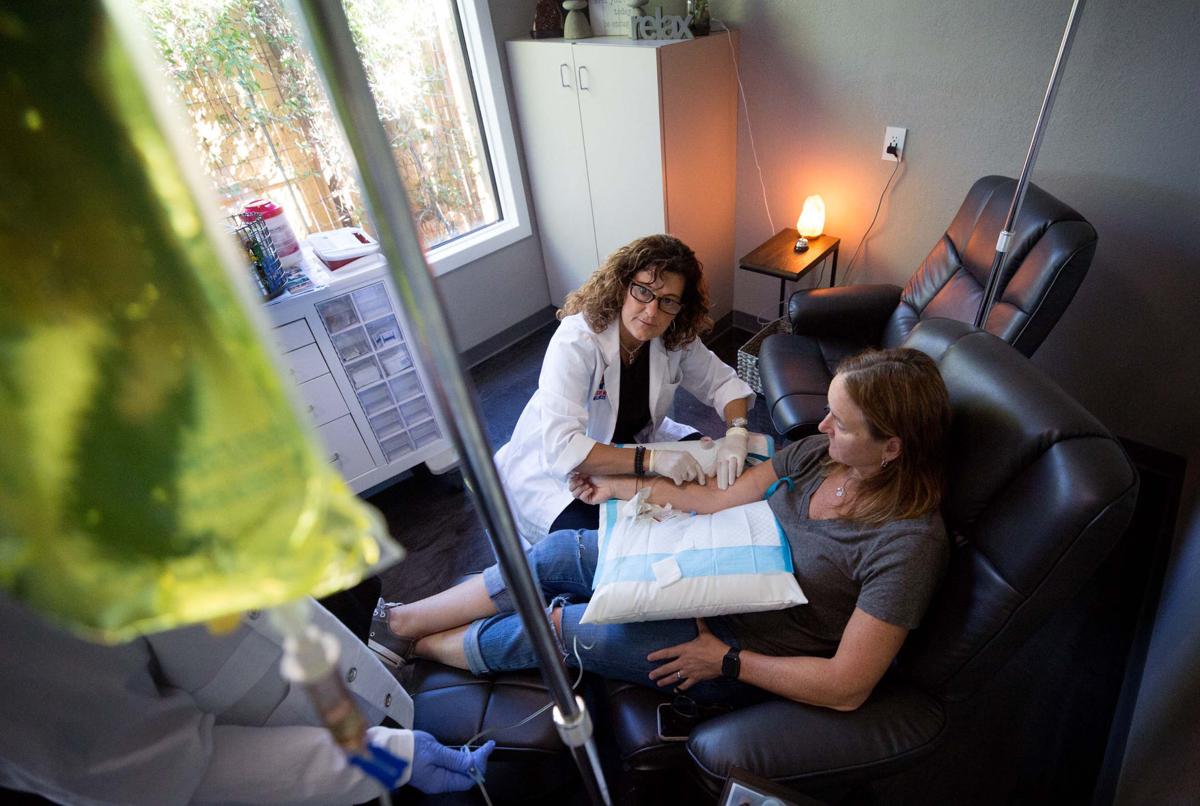 Lisa Ritter, a physician assistant-certified and owner of Rescue Me Wellness, 4601 E. Fifth Street, sets Chris Gage, right, with her IV filled with electrolytes and B-vitamin on October 3, 2019. 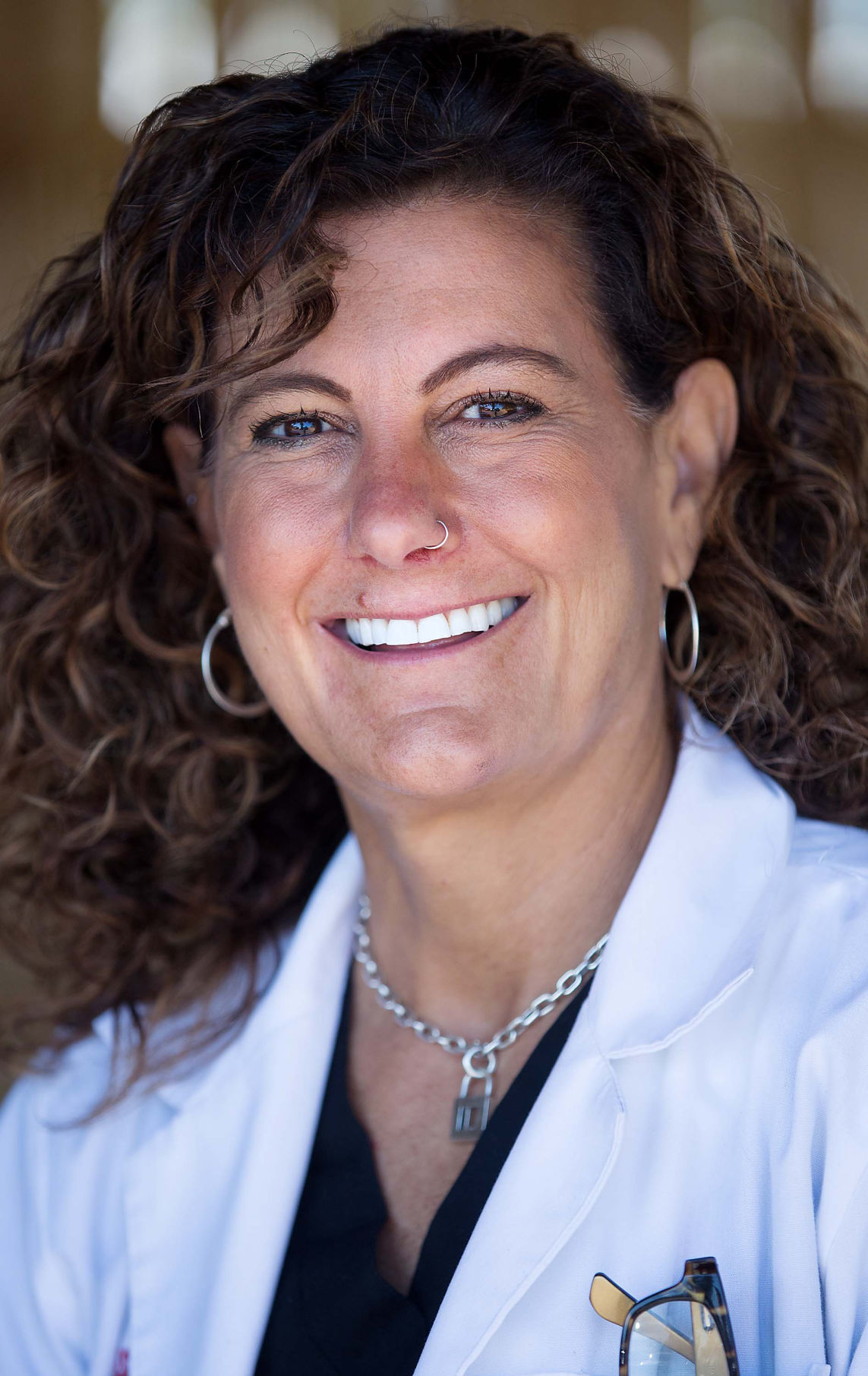