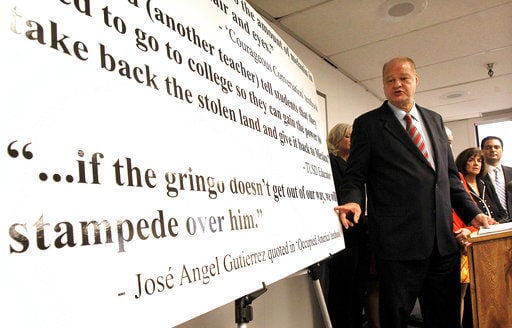 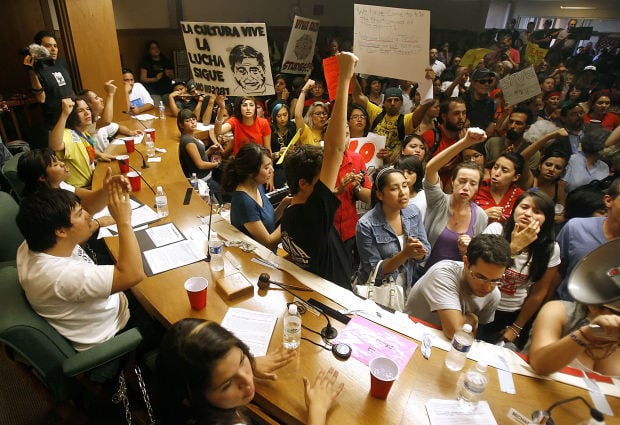 On April 26, 2011, protesters filled the TUSD Governing Board room, chaining themselves to chairs and the dais in protest of HB 2281, the Mexican American Studies ban.

By Astrid Galvan The Associated Press

He had previously upheld most of the law in a civil lawsuit filed by students in TUSD. But a federal appeals court, while upholding most of his ruling, sent the case back to trial to determine if the ban was enacted with racist intent.

The new trial was held in July.

The law prohibits courses that promote resentment toward a race or a class of people or advocate ethnic solidarity instead of treating people as individuals. A portion of the law that banned courses designed primarily for students of a particular ethnic group was struck down.

The state violated students' constitutional rights "because both enactment and enforcement were motivated by racial animus," Tashima said in the ruling Tuesday.

However, Tashima said he doesn't know a remedy for the violation and has not issued a final judgment. Plaintiffs' attorneys hoped he would throw out the law, which was enacted in 2010, the same year Arizona approved its landmark immigration law known as SB1070. They did not respond to calls for comment Tuesday evening.

Tashima was critical in his ruling of former state education leaders Tom Horne and John Huppenthal, who railed against the program and helped pass the law that ended it.

"Additional evidence shows that defendants were pursuing these discriminatory ends in order to make political gains. Horne and Huppenthal repeatedly pointed to their efforts against the MAS program in their respective 2011 political campaigns, including in speeches and radio advertisements. The issue was a political boon to the candidates," Tashima wrote.

Huppenthal said Tuesday he was not surprised by the ruling and said it was meaningless because the law is not likely to be enforced in the future.

"The concern about what was going on in those classes was very real," Huppenthal said.

His new concern "would be if they crank up all that stuff of teaching students that Caucasians are oppressors of Hispanics," Huppenthal said.

TUSD dismantled its program in to avoid losing state funding. The district hasn't responded to questions from The Associated Press about whether it would revive the program if the law is thrown out.

Horne, the former state attorney general and former leader of Arizona's public schools, testified in July that he was troubled by what he described as radical instructors teaching students to be disruptive. But he insisted he targeted all ethnic studies programs equally.

Horned testified that battle against the program began in part after he visited a Tucson high school to watch an aide rebut prior statements by guest speaker Dolores Huerta, a well-known national labor and civil rights activist, that Republicans "hate Latinos."

Some students taped their mouths and turned their back to Horne's aide, later walking out of the event with their fists in the air, "which is a pretty extremist thing to do," he said.

Horne never visited a Mexican-American studies classroom. He drafted the law as superintendent of public schools and later defended it as state attorney general.

Horne said of the ruling Tuesday that Tashima's decision promotes a program that "divides students by race and promotes ethnic chauvinism."

"I believe it is a fundamental American ideal that we are all individuals, entitled to be judged by our knowledge and character, and not by what race we happen to have been born into," Horne said in a statement.

The TUSD program began in 1998 and focused on Mexican-American history, literature and art in an effort to keep Mexican-American students in school and engaged. Students who participated outperformed their peers in grades and standardized tests, advocates said.

By 2015, TUSD was expanding a "culturally relevant" curriculum developed in the wake of a separate racial desegregation lawsuit. Those courses are now taught at all district high schools, Superintendent Gabriel Trujillo said.

He said the district worked with the Arizona Department of Education to ensure the courses don't violate the state law and are "very scripted," including offerings such as American history from an African-American perspective.

A ruling is expected in the next few weeks.

Trujillo, TUSD's interim leader, beat out three other finalists for the job.

Arizona basketball: Wildcats back to school after safe departure from Barcelona

UA was the most popular choice as the No. 1 team in 2017-18, according to a CBS survey of college coaches.

Popeyes Louisiana Kitchen opening on far east side in September, south side in late October.

The Arizona Daily Star's take on the KKK in 1921

Photos: Comic Jerry Lewis and his ties to Tucson

Over the years, comedian and actor Jerry Lewis came to Tucson mostly as an activist for the Muscular Dystrophy Association, which had its nati…

The quickest path to riches for former Arizona Wildcats in pro sports is the NBA.

Tucson is transitioning back to a low grade monsoon pattern.

The men were subsequently arrested for immigration violations.

When Jason Macoviak talks about his summer garden or his winter garden, he’s not talking about a seasonal transformation of his Bisbee yard.

We've collected a few front pages from newspapers.com to give you a look at some Aug. 24 papers in history. With a subscription to newspapers.…

Yelp reviewer: "If you need to hide from god, your job, your sponsor, and sunlight at 6am while listening to 'Neon Moon' then look no further, 'cause no one will look for you here."

Zinke declined to say whether portions of the monuments would be opened up to oil and gas drilling, mining, logging and other industries for which Trump has advocated.

Though the vaccine will be initially targeted to dogs, it could eventually be effective for humans, too.

This is the Massachusetts woman who won the $758M Powerball jackpot

An officer, a sergeant and a police lieutenant responded to the branch library where the councilman's sunglasses were stolen Aug. 3 while he was in the men's room

The firms offer 24-Hour emergency restoration of water, fire and mold damage for homes and businesses.

In search for three QBs who can win, RichRod narrows Arizona Wildcats' competition to four

Highlights from the UA's media availability after practice Thursday morning.

National Kiss and Make Up day and other goofy observances

If you've been holding a grudge, Friday, Aug. 25, is the day to let go of it. It's National Kiss and Make Up day.

Top six takeaways from the Arizona Wildcats training camps that ended with a scrimmage Saturday:

'Not a lot of teams in Tucson have a David Watson:' Here's what makes the Amphi star tick

The driver let students off at a non-designated bus stop.

Service, which was out for more than six hours, was restored by 10 p.m.

Man treated and taken to a Tucson hospital.

Man was identified through social media posts and at least one interview.

A Q&A with the freshman quarterback who has a shot to become the third QB on Arizona's depth chart this season.

It was called "One City, One County, One Community."

Michael Sauber Jr. lost his job with the Tucson Police Department but won't be prosecuted after his arrest in July.

Unit in prison was on lockdown Monday following disturbance.

On April 26, 2011, protesters filled the TUSD Governing Board room, chaining themselves to chairs and the dais in protest of HB 2281, the Mexican American Studies ban.