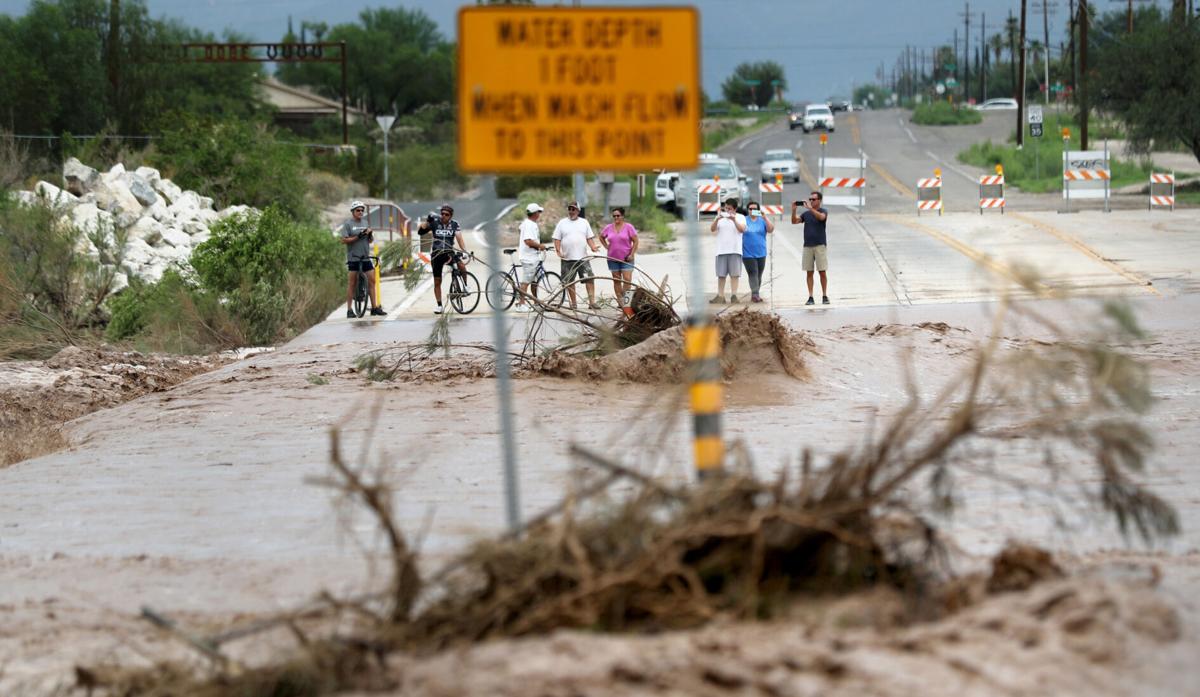 The flooded Pantano Wash draws crowds of onlookers where it cuts off Harrison Road following a night of intense rain.

The Rillito River was rolling along just west of Swan Road after a powerful storm with heavy rain over the Tucson area early Friday.

Tucson was walloped by a powerful storm early Friday morning in a system that is expected to bring more rain to the area this weekend, officials say.

Tucson International Airport recored a little over an inch of rain, the National Weather Service said. Rainfall topped 2 inches on the northwest side as well as the Foothills, officials said.

The Tucson Fire Department said on Twitter that it rescued 11 people, two dogs and two cats during the storm.

At one point Friday, Pima County listed more than 30 roads as closed due to flooding or storm damage.

Pima County’s Office of Emergency Management and Regional Flood Control District warned that portions of the Santa Catalina Mountains affected by the Bighorn Fire could cause flash flooding or mud.

The storm hit so hard in the Catalina Mountains that the Coronado National Forest on Friday said several recreational areas were temporarily closed.

Monsoon activity is expected throughout Southern Arizona for the rest of the weekend.

A flash flood watch remains in effect for the Tucson area until Saturday evening, according to the National Weather Service.

The system is expected to taper off Sunday evening.

In Scottsdale, city officials reported outages in the city’s Old Town district and South Scottsdale. Crews have been working to restore power and clean up debris. Multiple streets in flood-prone areas have been closed.

In more urban areas such as Phoenix, there are flood risks on highways, streets and underpasses. Drivers are being advised not to try to cross any flooded path, the AP reported.

One positive for Phoenix residents: Temperatures around Phoenix are expected to stay below 90 degrees through the weekend.

What Tucson is saying about Friday's monsoon weather

Powerful thunderstorms rolled through Tucson and parts of Southern Arizona Thursday night and Friday morning. Here's a look at what weather Tucsonans are seeing around town.

Fitz's Opinion: In a drought of reason rain is music to our ears

OPINION: Tuning out the truth and dancing in the rain

Despite recent storms, Tucson's monsoon expected to be subpar

On the bright side, Tucson is ahead of its usual rainfall total for July.

So far, though, the ash and debris draining out of the fire-damaged mountains into washes is mild compared to last summer's black goo from the 2020 fire.

After a Monday deluge that saw rainfall of more than an inch in some areas, a flash-flood warning is in effect for Tucson and most of Southeastern Arizona through Wednesday evening.

The remains found this week belong to a 31-year-old man, police say.

Body of Arizona girl, 4, swept away by storm is found

Meanwhile, the search continues in Cottonwood for a 16-year-old girl swept away in a flooded wash.

The flooded Pantano Wash draws crowds of onlookers where it cuts off Harrison Road following a night of intense rain.

The Rillito River was rolling along just west of Swan Road after a powerful storm with heavy rain over the Tucson area early Friday.