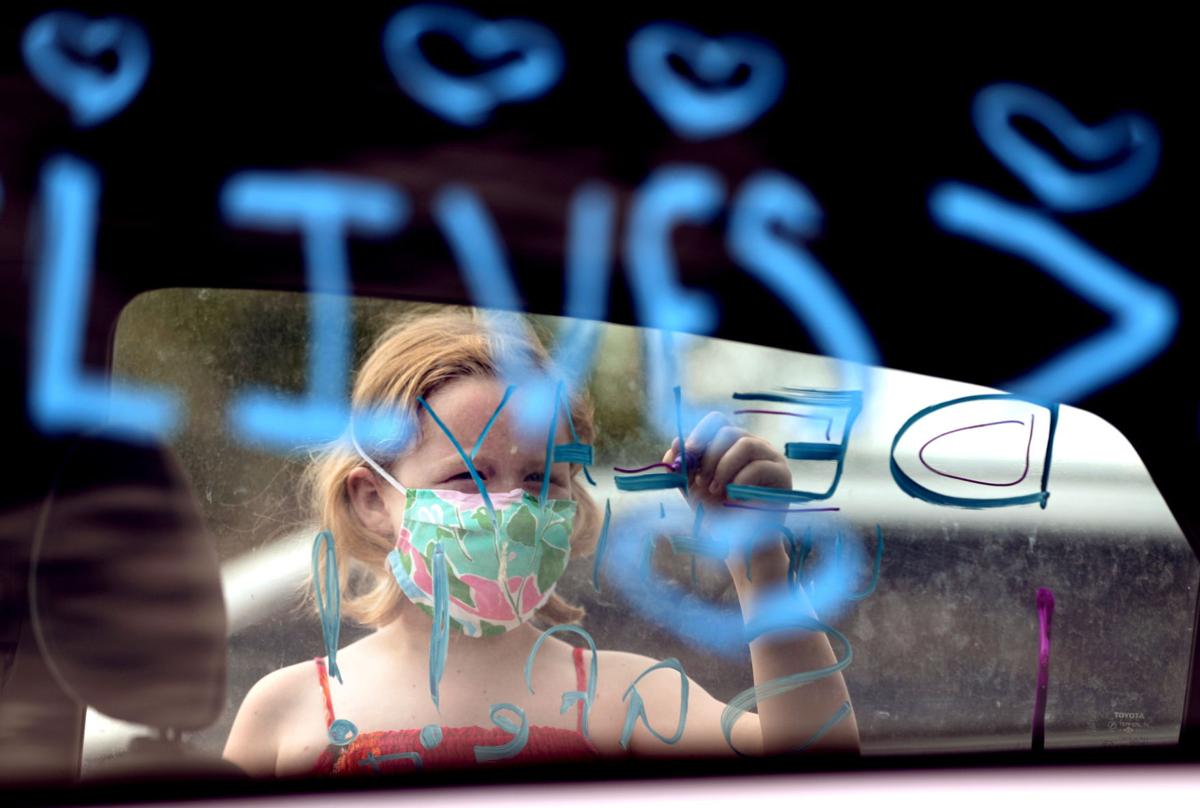 Ryer Dixon helps decorate her family car for the Tucson Motor March. The participants in Wednesday’s motorcade, which took a circuitous route through southwest Tucson ending at Sentinel Peak, were advocating for a delay in the opening of in-school classes. 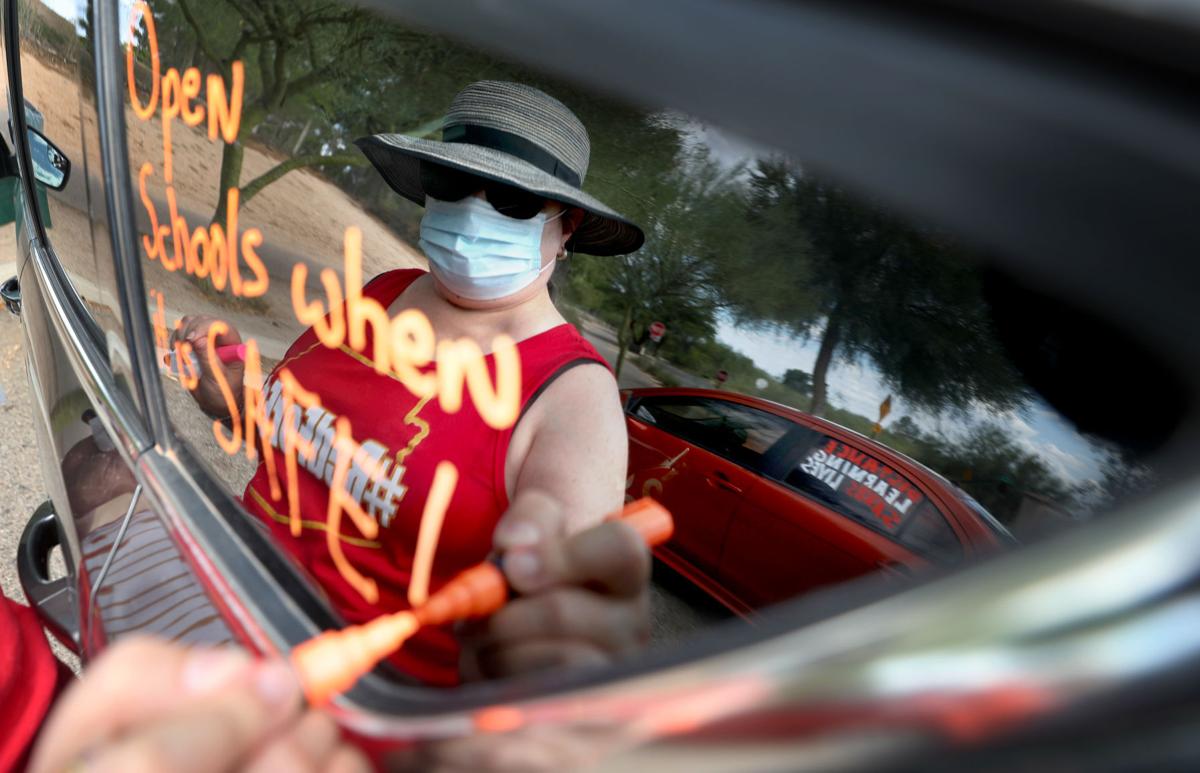 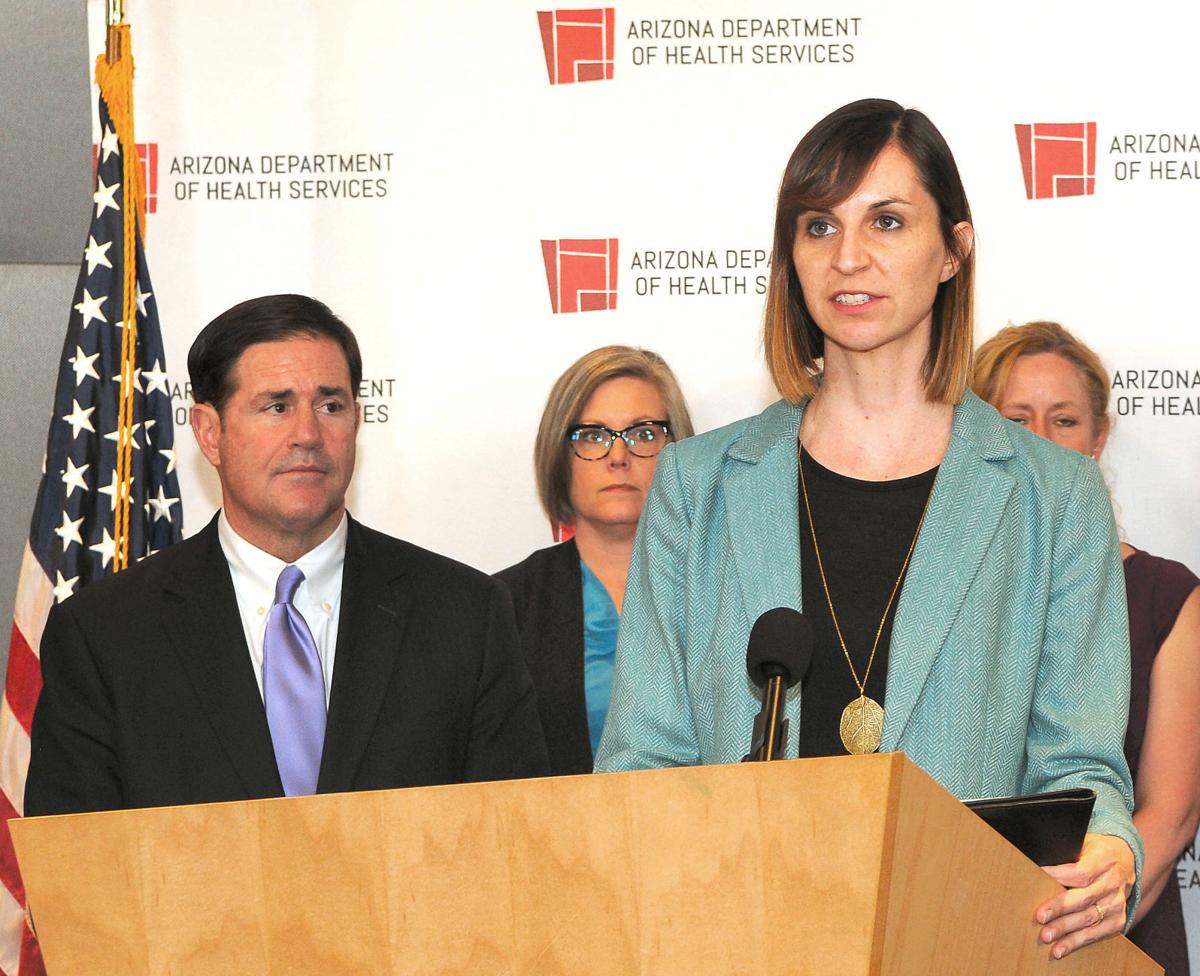 Arizona schools chief Kathy Hoffman is calling for a downward trajectory of new confirmed cases and a decline in the positivity rate before children can return to campuses.

Pressure is building on Arizona Gov. Doug Ducey to scrap the idea of setting a firm date for students to return to classrooms.

There is increasing consensus among some education and health officials that Arizona would be better served by spelling out the conditions under which in-school instruction could be considered safe — or at least less risky. That means establishing metrics to consider rates of coronavirus infection and spread and how fast schools can get test results.

All this comes against the backdrop of the governor having set an “aspirational” statewide date for in-classroom learning of Aug. 17.

Ducey is expected to provide his latest projections for restarting in-person instruction at a press conference Thursday.

Daniel Scarpinato, the governor’s chief of staff, said his boss is working with education officials and shares their goal of safely reopening schools “at the appropriate time.” And he indicated that Ducey was not necessarily opposed to some sort of metrics as well as providing flexibility to school districts.

But he said the issue needs to be kept in perspective.

“Schools are, if there is an essential service, they are the most essential service,” Scarpinato said. “We need to be thinking about how we best educate students and provide structured learning environments during a pandemic, which is not ending any time soon.”

That includes online learning “and how to do it right,” he said. But Scarpinato said there also need to be “options for students who have no place else to go, whose parents work, who may have special needs.”

“School leaders should be empowered to work with local public-health officials to examine data and determine when it’s safe to reopen for in-person learning, rather than relying solely on dates,” she said in a new memo. And Hoffman has some specific ideas of what should be measured.

For example, she wants a downward trajectory of confirmed new cases of COVID-19. Hoffman also wants the positivity rates for testing — the percentage of tests for the virus that show an active case — to go down.

“I want students back in our classrooms because that’s the best place for learning and growing,” she wrote. “However, we cannot ask schools to make decisions that will impact their teachers’ and students’ health and safety without first providing them with the necessary public-health data and funding to make safe decisions.”

That funding reference relates to a separate call for the state to provide the same dollars on a per-student basis for all children, whether districts decide to provide full-time classroom instruction, full-time at home, or some sort of hybrid.

Current law sets aid as low as 85% in some of these cases. And with average aid at about $5,300 a year, that can reduce state funding by close to $800 a year for each remotely taught student.

Multiply that by the number of students being taught at home, full or part time, and it means a real hit to affected districts. Hoffman said that’s not acceptable.

“Distance-learning costs to schools are high,” she said. “Many public schools already have invested considerably in technology, online learning platforms, and other tools needed during distance learning.

“Students need access to services that support their well-being and academic success across multiple scenarios and conditions during a pandemic.”

And if nothing else, Hoffman said schools districts need the kind of “flexibility and budget stability” from a set state-aid figure.

On the issue of metrics, Hoffman’s aides declined to say what specific figures of declining rates or testing she believes would show that the virus is finally under control.

But that was not a problem for Sheila Harrison-Williams, executive director of the Arizona School Boards Association.

In her own letter to Ducey, she said that schools should not reopen for in-class instruction until the number of COVID cases has been on a downward trend for at least 28 days. Ditto, she said, on the rate of positive tests.

And Harrison-Williams said that those positivity rates need to be no greater than 15% for 14 consecutive days — and that the median time for test results should be no more than three days.

Even Will Humble, the former state health director, has some specific benchmarks.

Most significant, he said, would be having 80% of contact tracing completed within 96 hours of sample collection. He, too, wants a “consistent” reduction in new COVID-19 cases in the community.

Humble said that setting these metrics and doing so in a public way has a bonus effect.

“It gives the community something to work for together,” he said, taking the steps necessary to meet the goals and get kids back in the classroom.

There are signs that the infection rate is decreasing — at least on a statewide basis.

Data from the Department of Health Services shows the state hit a peak of 5,411 new confirmed cases on June 29. But state health officials caution that delays in getting data mean that the numbers for the past seven to 10 days are subject to change.

Positivity is a different story. Over the past week, nearly 1 out of every 4 tests confirmed infection, compared with just 8.5% nationally.

Christine Severance, a family medical physician in Phoenix, said even that national rate is too high to ensure safe operation of schools. She said the original guidelines from both the Centers for Disease Control and Prevention and the World Health Organization set a target of less than 5% positivity.

Severance, who is coordinating efforts with Save Our Schools Arizona, said that’s only part of the equation. What’s also needed, she said, is both adequate testing and prompt results.

“What we’re seeing right now is a lag time in test results of almost two weeks,” Severance said. “That’s just too much because people feel they can’t miss work while they wait for those two weeks to pass to find out if they’re positive or negative.”

While the cinema drive-in may have gotten a boost as lockdowns gradually come to an end amid the COVID-19 outbreak, in Paris film fans can now…

Top photos of the day as selected by the Associated Press.

Ducey has repeatedly sidestepped the question of raising the state benefits cap, which is the second lowest in the nation, saying that Arizonans are protected by that extra $600 a week.

Many Tucson-area teachers fear returning to classrooms while coronavirus rages

Some Tucson educators say they would retire early or resign if forced into a classroom while COVID-19 numbers remain high. Others say they can’t afford to quit but are terrified to go back.

TUSD to spend $13M to reopen schools; says monitors, not teachers, might be in classrooms

Students in the Tucson Unified School District could be supervised by monitors who will be tasked with ensuring pandemic safety guidelines while educators teach virtually from home.

Across Pima County, 14,143 cases of coronavirus have now been confirmed, up 153 cases from the day before.

Arizona will leave decision on reopening to school leaders

Arizona schools will get more money to provide education during the coronavirus pandemic.

Ryer Dixon helps decorate her family car for the Tucson Motor March. The participants in Wednesday’s motorcade, which took a circuitous route through southwest Tucson ending at Sentinel Peak, were advocating for a delay in the opening of in-school classes.

Arizona schools chief Kathy Hoffman is calling for a downward trajectory of new confirmed cases and a decline in the positivity rate before children can return to campuses.