In your genome, you carry many genetic changes that you inherited from your ancestors. Those variants represent your own genetic history.

By studying patterns of genetic variation in many people, our research reveals humanity’s journeys across the globe and identifies the genetic changes that enabled migration into new environments.

Recently, our research has focused on Central African Pygmies.

Humanity evolved in the savannas of East Africa; yet, Pygmy peoples live in the rain forest of Central Africa as hunter-gatherers. This dramatic lifestyle change likely required many adaptations.

Central African Pygmies are among the most genetically distinct of all human populations, and understanding their journey into the rain forest helps reveal the bounds of human adaptation.

Our graduate student PingHsun Hsieh then developed complex computer simulations that could predict the patterns of genetic variation caused by many different evolutionary processes. Comparing his simulations with the genome data enabled us to identify the best models of Pygmy evolutionary history.

We first studied the population demographic history of Pygmies and African farmers. When did these peoples separate from each other, and how much have they mixed since? To answer these questions, we searched for the historical scenario that best predicts today’s patterns of genetic variation.

We found that the ancestors of modern Pygmies and farmers split roughly 100,000 years ago, which is among the earliest splits in human history.

We also found that genetic exchange after the split began roughly 50,000 years ago, reflecting intermarriage practices that continue to this day. This historical model informs our study of the ancient past, and it serves as a baseline for detecting other evolutionary events.

The rain forest that Pygmies inhabit poses distinct challenges compared with the savanna where humanity evolved.

What genetic variants enable Pygmies to thrive in the rain forest? To identify those variants, we searched the genomes of Pygmies for genes with patterns of variation that are consistent with genetic adaptation and our historical model.

We found 42 such genes. Many of them function in the immune system, and variants in those genes likely help Pygmies fight off diseases that are particular to the rain forest. We also found many genes involved in bone synthesis and muscle development.

Variants in those genes probably explain why Pygmies are generally short. That short stature may enable Pygmies to better move through the forest or regulate their body temperature.

Until a few tens of thousands of years ago, humans lived alongside closely related hominid species that are extinct.

Instead, we used our computer simulations to identify regions in the Pygmy genomes with patterns of variation that cannot be explained without interbreeding. We found many such regions, showing that interbreeding occurred not only once, but multiple times.

Our research shows that African peoples have been splitting, mixing, adapting and interbreeding for tens of thousands of years.

Ongoing genome sequencing and analysis by our research teams and others will no doubt reveal even more details about humanity’s complex evolutionary history.

Ryan Gutenkunst is a University of Arizona assistant professor of molecular and cellular biology. His research focuses on computational approaches to uncovering the molecular basis of evolution. He applies these approaches to many organisms, including yeast, fruit flies, desert tortoises and humans.

Michael Hammer is a University of Arizona research scientist in the Arizona Research Laboratories. His research focuses on genomic approaches for understanding human and primate evolution and for characterizing the genetic basis of epilepsy.

Photos: The Art of Science

Special Science section: Holding the future in our hands

There can be no doubt that science and technology will continue to profoundly impact the way we live, and even to impact some of the physical … 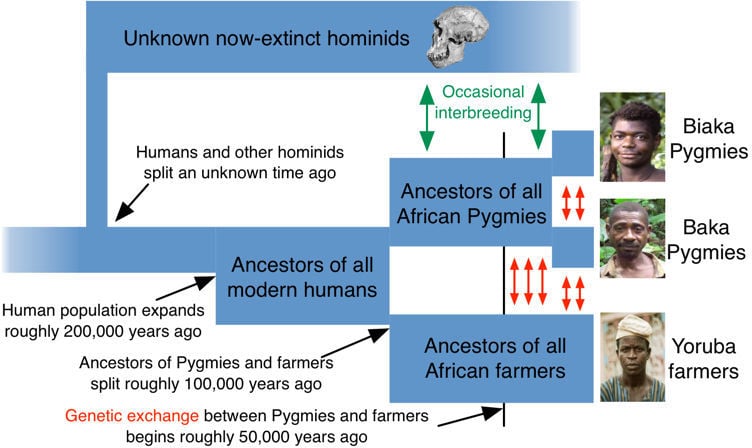 Ryan Gutenkunst is a University of Arizona assistant professor of molecular and cellular biology.

Michael Hammer is a University of Arizona research scientist in the Arizona Research Laboratories.