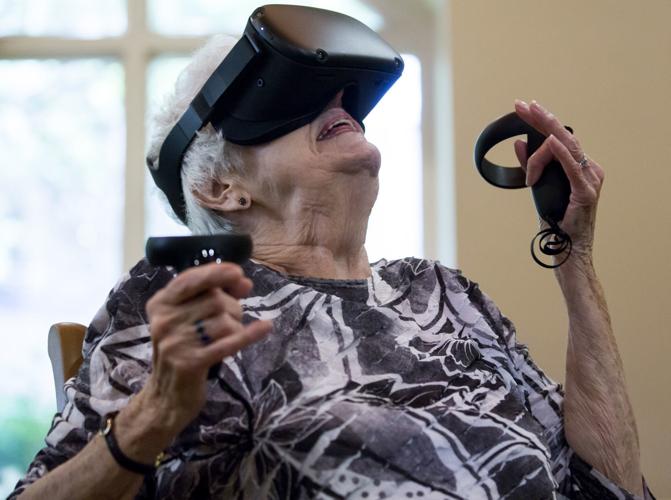 “Isn’t it wonderful,” says Joy Kay, a retired day care worker and resident at The Fountains at La Cholla, as she wears a headset and laughs about her virtual reality roller coaster ride that appears so real because of the sounds and three-dimensional, 360-degree view. 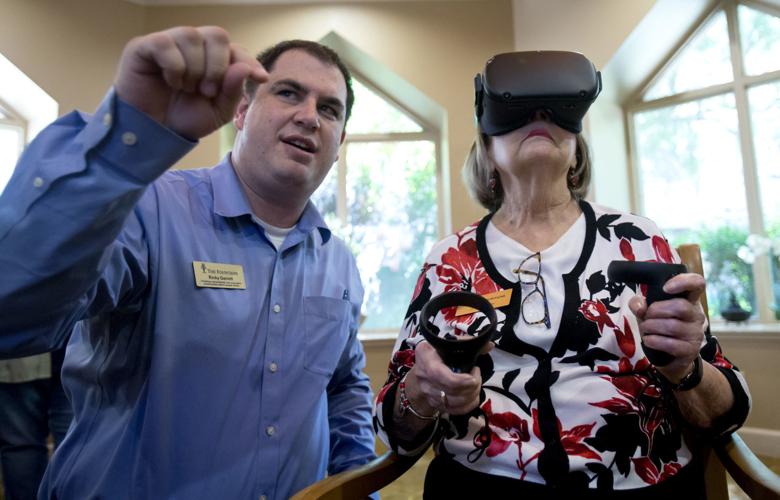 Ricky Garrett, left, technology concierge for The Fountains, has a waiting list of residents who want to experience virtual reality trips and games using Engage VR. “It is really cool technology and cool to see someone engage in it,” he said.

Retiree Joy Golliver experienced traveling by virtual reality to Kachess Lake, Washington, a mountainous community where she and her late husband lived for 22 years.

Joy Kay went on a daring roller-coaster ride — traveling high into the air and then dropping fast into a body of water before coming back up onto a winding track leading through a mountain passage.

The 85-year-old retired day care worker didn’t utter a sound as the roller coaster traveled over what appeared to be a cliff, landing on a track leading into pine country.

“Isn’t it wonderful,” says Kay, while wearing a headset and laughing about her virtual reality roller coaster ride that appears so real because of the sounds and three-dimensional, 360-degree view.

Virtual reality is a computer-generated simulation of a three-dimensional image or environment that can be interacted with in a seemingly real or physical way by a person using special electronic equipment, such as a headset with installed software equipment or hand-held touch controllers.

Researchers around the country are studying virtual reality’s role in senior care in many ways, including to see if it can help improve elderly patients’ cognition, loneliness, help with mobility issues or to better detect the onset of dementia or other health problems.

For Kay, this was her second experience on the roller coaster ride as a resident of the northwest-side The Fountains at La Cholla, 2001 W. Rudasill Road, owned by Watermark Retirement Communities.

Watermark piloted the program at The Fountains and at The Hacienda at the River, 2720 E. River Road, and now it is expanding into more of its communities nationwide, said Zoe Katleman, a project manager for Watermark’s innovation team.

Katleman is leading Engage VR nationally and eventually the program will be implemented among its more than 60 retirement communities.

Another Fountains resident, Joy Golliver, took a turn playing a virtual reality game in which she was a ninja using a samurai sword to slice fruit in the air.

“I’m out of breath,” said Golliver, 84, after playing the game for about five minutes and getting a good arm workout.

The retired businesswoman, who is an author and memoir writer, then experienced traveling by virtual reality to Kachess Lake, Washington, a mountainous community where she and her late husband lived for 22 years.

The Google Cast street view image brings joy to Golliver when she recognizes a former neighbor sitting by the lake.

She texted her children about her trip to the lake, and both her sons, who live in Seattle, texted her back, wondering how she traveled there without them knowing about it. The mother told them about the wonders of technology and her experiences with virtual reality at the Fountains.

“This technology can take us to any memory in our life that we want to visit,” said Golliver, explaining it is aiding her with writing memoirs. She then mentioned her visits to Roslyn, Washington, and a bar that was used for the 1990s television series “Northern Exposure.”

Kay also used virtual reality to go back to her home in Naperville, Illinois.

While she wore the headset and saw her neighborhood, that same image was visible on a TV screen for others to see. Kay’s voice filled with excitement as she saw where she grew up, including the neighborhood’s lush lawns and tall trees. An image of the DuPage River appeared and she recalled her husband laying the brick on the Naperville Riverwalk.

“I can come here anytime and go home,” said Kay of the virtual reality session. “It is so popular that you have to sign up.”

Ricky Garrett, the technology concierge at The Fountains, has a waiting list of residents who want to experience virtual reality’s trips and games.

“It is a hit,” said Garrett. “It is really cool technology and cool to see someone engage in it.”

Among experiences residents can partake in is visiting pyramids in Egypt or the Eiffel Tower in Paris.

One woman who lives at The Hacienda at the River recently shared how the powerful experience reconnected her to a “sense of adventure again.” She was a world traveler until she turned 90, and now once again can travel the world through virtual reality.

Other possibilities with virtual reality include residents’ wishes to travel to any landmark in the world, fly to the moon and back on the Apollo 11 mission, swim with whales, climb glaciers in Antarctica or go on fishing expeditions.

Eventually, residents at the two Tucson retirement communities will have the ability to connect with residents at other Watermark communities. For example, veterans who served in the same battalion could connect in a virtual living room to talk and compare stories,” said Katleman.

It took Grayson Barnes, who is experienced in gaming design and development, about two years to develop Engage VR for Watermark.

Barnes, 20, who is studying at the Rochester Institute of Technology in New York, said in an email interview that “One of the first things we looked at when starting the project was how virtual reality affects those with dementia.

“I was surprised to learn that a lot of research has been done on the subject. I found articles detailing dementia patients being more themselves after experiencing virtual reality.”

He said he also learned a group of researchers have “turned to virtual reality as a potential method to screen for early signs of dementia.”

Watermark has a strong relationship with the University of Arizona’s Evelyn F. McKnight Brain Institute and the UA Department of Psychology, said Katleman.

“As an extension of this relationship, we are highly motivated to explore research projects involving virtual reality where new information will help to provide better understanding of dementia,” Katleman said.

Dr. Marvin Slepian, a world-renowned University of Arizona physician-scientist who is a regents professor of medicine and director of the Arizona Center for Accelerated Biomedical Innovation, said virtual reality is being used in general for advanced diagnosis and therapy for patients.

“Advances in wearable technology, virtual reality and integrative imaging hold the promise of revolutionizing how we monitor, control and prevent disease,” said Slepian.

He said imaging and virtual reality are being used to relieve surgical pain, administer physical therapy and cognitive rehabilitation, and complement surgical training.

In regards to virtual reality programs, such as Engage VR, he said in general patients with dementia whose brains stay active and engaged have better cognition.

Adventure Bus offers respite for those living with dementia, their caregivers

Tours helps give caregivers respite time, keeps those with dementia active and socializing.

Tucson weather: Expect warmer temps this week before a cool down

Tucsonans should expect warmer than average temperatures in the 90s to start the work week, according to the National Weather Service.

A Border Patrol agent might have been injured in a fall Sunday while patrolling near Patagonia before he died, officials said Monday.

The display will run through Jan. 6.

The goal of both organizations is to raise the competency standards of health-care workers and increase the numbers of caregivers in Pima County, officials said.

“Isn’t it wonderful,” says Joy Kay, a retired day care worker and resident at The Fountains at La Cholla, as she wears a headset and laughs about her virtual reality roller coaster ride that appears so real because of the sounds and three-dimensional, 360-degree view.

Ricky Garrett, left, technology concierge for The Fountains, has a waiting list of residents who want to experience virtual reality trips and games using Engage VR. “It is really cool technology and cool to see someone engage in it,” he said.

Retiree Joy Golliver experienced traveling by virtual reality to Kachess Lake, Washington, a mountainous community where she and her late husband lived for 22 years.