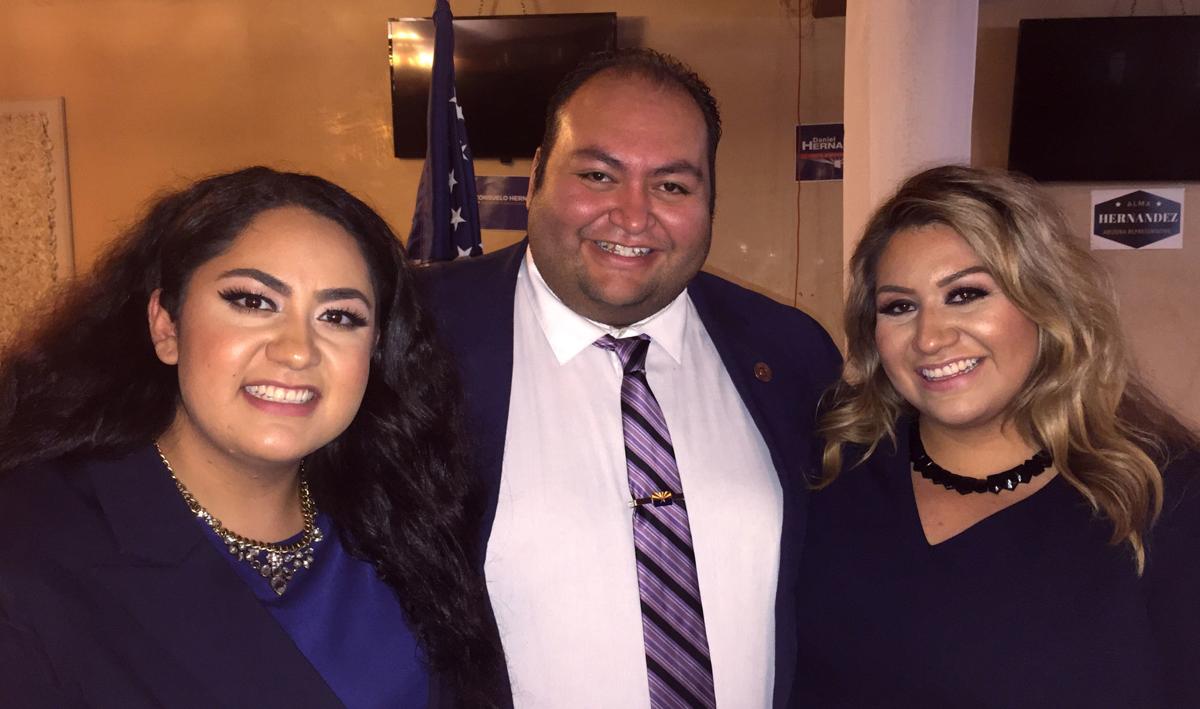 Daniel Hernandez Jr. says that as a young gay Latino, he’ll never be part of the political establishment.

Don’t be so sure.

Hernandez, 28, is gearing up to run for re-election to the Arizona House from Legislative District 2, which stretches from Tucson’s south side, across Green Valley, down to the border at Nogales. This time he’ll have running mates, of sorts.

On Thursday night, Hernandez and his two younger sisters, Consuelo and Alma, held a joint campaign kickoff event at the Salon Mexico in central Tucson. All three siblings are Democrats running for office this year — Alma for the state House in Legislative District 3 and Consuelo for Sunnyside school board. If they win, we could see a shift in the local political power structure.

You see, though Daniel Hernandez became known for helping save Gabrielle Giffords’ life after she was shot, he is not really of the Giffords network, where he is often viewed as an opportunist. And though he is a south-side Mexican-American, he’s not favored by the Grijalva clan. Among local Democrats, Daniel and his sisters are their own thing — young, yes, and Latino, and potentially formidable in their own right.

“My kids were taught the only thing that holds you back is yourself,” Daniel Hernandez Sr. told me Thursday.

I heard of Daniel Hernandez the same way most people did — from him giving numerous interviews after the mass shooting at a Giffords constituent event on Jan. 8, 2011. In those days, he was everywhere in the news media — as we say in the business, “unavoidable for comment.” And that left him labeled as an opportunist by many — most recently, Pima County GOP Chair David Eppihimer used that word for him when we talked Friday.

But as Matt Heinz, the former state legislator and congressional candidate, told me at Thursday’s campaign event, not everyone would have had the skill, fortitude or — my word here — brazenness to take advantage of that moment the way the 19-year-old Hernandez did.

And when I ran into Hernandez personally, this time in 2013 when he was serving as a Sunnyside school board member trying to oust then-Superintendent Manuel Isquierdo, he was similarly brazen in his pursuits. He didn’t fully grasp that in working against a board majority that supported Isquierdo, he was working against members allied with U.S. Rep. Raúl Grijalva, the longtime Democratic power.

“I never go into something thinking, ‘Is this going to win people over?’” Hernandez told me Friday. “I focus on, is this the right thing to do? If it meets that metric, I honestly don’t care what the consequences are, because I’m doing what I think is best.”

In his 2016 campaign, the Green Valley News revealed that Hernandez had not received the bachelor’s degree he claimed — he was short one math class. That’s still true: He told me he is taking an online math class that allows him to go at his own pace but must be done by June.

During that campaign, the depth of Grijalva’s unhappiness with Hernandez became clear when he supported an unknown, alternative candidate in the Democratic primary against Hernandez. Hernandez and incumbent Rosanna Gabaldon beat that candidate, Aaron Baumann, handily.

That haul came in part from the relentless networking Hernandez has done since the mass shooting — invited to give talks around the country after he wrote a memoir, “They Call Me a Hero,” then in jobs with anti-gun-violence groups and Planned Parenthood.

“Really, the vast majority of it is, I have relationships with people,” Hernandez said. Among the out-of-state donors, he added, “Most of these people don’t care about the 2nd Legislative District. They say, ‘We want people like you in office, because you’ll have a platform to talk about things like gun violence prevention.’ “

Nobody sees that more clearly than Chris Ackerley. He was the incumbent Republican in LD2 who was defeated by Gabaldon and Hernandez in 2016, and he’s running again this year.

“He was able to raise a lot of money from outside the state and outside the district, and it left us at a competitive disadvantage because I was a clean-elections candidate,” Ackerley said. “Now I have no choice but to run as a traditional candidate.”

Having created his own donor network, Hernandez can offer his sisters a kind of help he did not have when he launched his political career.

Alma Hernandez, the youngest sibling at 24, is facing three other Democratic candidates for the two open seats being vacated because of term limits by Macario Saldate and Sally Gonzales.

Financially speaking, the most formidable so far is Andres Cano, a former aide to Pima County Supervisor Richard Elías who has raised $25,660 already. Politically speaking, Olivia Cajero Bedford is also a potentially strong candidate — termed out as a state senator but benefiting from support from the Grijalva network. Also running is Maria Garcia, who served out the state Senate term of her late husband, Jorge Luis Garcia after he died while in office.

Alma has worked in many campaigns herself, among them Steve Farley’s campaigns for Legislature and Joel Feinman’s run at Pima County attorney.

“I’ll now be officially old enough to finally run after so many years of helping other candidates,” said Alma Hernandez, who turns 25 in April. “Once you get involved, it’s hard to get away.”

Among her priorities, she said, will be health issues — she has a master’s degree in public health and plans to go to medical school — and criminal justice reform.

Alma has deployed as a centerpiece of her campaign a story she had kept hidden before. She says that when she was a 14-year-old freshman at Sunnyside High, two 19-year-old seniors attacked her, and a police officer ended up landing on her back with his knee. That resulted in permanent spinal damage, she said, and felony charges against her that were eventually dismissed. She was kicked out of Sunnyside but allowed to return.

“Our parents always taught us never to feel sorry for ourselves,” she said. “My dad made me go back to Sunnyside, and I still was able to graduate a year early.”

When Daniel decided not to run for re-election to his Sunnyside school board seat, he said he looked around for other candidates.

“I spent about a year trying to get someone to run for that seat, only to realize Consuelo was interested,” he said.

Two seats will potentially be available, as Eva Carrillo Dong is also up for re-election and has not announced whether she plans to run again. They would be a hard pair to fit on the same board: Dong once took out a protective order against Consuelo during the hard days of the Isquierdo controversy, an order the Hernandez family fought and was subsequently lifted.

“This is a family that is dedicated to work,” said Farley, a state senator and candidate for governor. “They are relentless. They want to get stuff done, and they’re willing to do the work it takes.”

That relentlessness, even brazenness, just might be enough to get them elected — and to start forming a new kind of establishment, one where they would be central.

What a disgusting end to a sad chapter.

'They Call Me a Hero' recalls the Jan. 8 mass shooting and its aftermath.

The head of Southern Arizona's YWCA is challenging two well-known Democrats in the race for governor.