The uncertainty of the COVID-19 pandemic has caused a national dip in college enrollment.

Pima Community College, for instance, has seen a near 20% drop in enrollment since fall 2019.

But drive across Tucson, and that’s not what’s happening at the University of Arizona. At least, not on the surface.

Preliminary figures show that overall enrollment at Arizona’s flagship university has not stopped climbing since fall 2019 — it topped 48,000 students this fall — despite 1½ years of mostly remote course offerings and limited on-campus activity.

And although the final numbers will not be available until later this month, the UA is on track to record the largest incoming class in its history after welcoming roughly 8,700 first-year students during the first week of in-person classes this school year.

Nathan Grawe, a professor of economics at Carleton College and author of Demographics and the Demand for Higher Education, said the uptick in enrollment is not unique to the UA.

“Last spring we saw a shift in applications — and now matriculations — toward both larger institutions and more selective institutions. So, (the UA) might be riding that wave,” he said. Arizona State University, the University of Missouri and the University of Tennessee are also among the many big-name public universities that have recorded enrollment growth during the pandemic because “the institutions with a name for themselves in this last year seem to have done better.”

But at the UA at least, there’s another trend at play within those rising enrollment numbers: an influx of out-of-state students and a contraction of in-state students.

In fall 2019, nearly 62% of undergraduate students enrolled at the UA were Arizona residents and 32% were not. In-state enrollment dropped to about 61% in fall 2020, and the unofficial data from this semester shows it has now dropped to 57%. Meanwhile, out-of-state enrollment jumped 2% last fall and another 4% — to 38.4% — this fall.

Grawe said the rise in out-of-state students bucks the initial hypothesis that the pandemic would keep more prospective college students closer to home. Instead, the shutdown of campus tours and test-optional policies many universities, including the UA, have temporarily adopted likely encouraged more applications to more selective schools.

“If you’re a student and you’re not able to visit the campus, you might be drawn more to the school with the name,” Grawe said. On the testing front, “you might get some students who say, ‘I would normally be concerned about not having the test scores to get into the University of Arizona, but if I don’t have to take the test, maybe this year is the opportunity for me to catch the eye of the admissions office and show them other parts of my portfolio.’”

To some degree, that analysis appears to have borne out at the UA, where in-person campus tours and recruitment events were on pause until March 2021 — after many would-be students had already submitted their applications for this school year.

“One of the silver linings of the pandemic and us having to close down our on-campus offerings is that we created so many virtual options for student to really be able to imagine themselves here at the U of A,” said Kasey Urquídez, vice president of enrollment management, who helped lead the university’s virtual recruitment campaign last year.

“Families that maybe couldn’t afford to travel all the way here could do everything from their home while they were home during the pandemic and really explore us in different ways. The access we were able to open up — not just with phone calls and on-demand stuff, but with interactive ways that helped families see themselves here — made a huge difference to students.”

The sticker price for one year of out-of-state tuition and fees at the UA was more than $36,000 during the 2020-21 school year. But most students don’t actually pay that much. According to U.S. News and World Report, which ranked the UA as one of the top 100 universities in the country, the university met 61% of its students’ financial needs. Further, roughly one-third of first-year students this year qualified for a federal Pell Grant, which is a common metric used to quantify low-income student enrollment.

Diane Campbell is a college counselor in Fort Collins, Colorado, who also serves on the UA’s counseling advisory board. The virtual recruitment experiences last year exposed more of her students to the idea that going out-of-state — to the UA or one of the numerous other competitive public universities offering increasingly generous financial aid packages — could be affordable.

“Because students were locked down and at home doing virtual school, the excitement of going away to college was exacerbated a bit. Pre-Covid, students leaned toward being local,” she said. That sentiment, combined with widespread test-optional policies and virtual outreach, drove up the average number of schools she saw students applying to in general. A lot of families who ended up applying to the UA, specifically, “were surprised by how much aid they received, and that they could afford it.”

The precise, localized reasons for that shift is not yet clear, especially because the UA won’t be releasing demographic data broken down by in-state and out-of-state students until the final census numbers are in.

The consequences of this general trend, however, were examined in a 2016 study in the Journal of Higher Education, which concluded that “increases in nonresident enrollment squeeze out in-state students from traditionally underrepresented backgrounds,” especially at prestigious universities as well as those in states with high minority populations.

ASU, which is experiencing an enrollment trend similar to the UA, did share some unofficial numbers with the Arizona Daily Star for this article, and at first blush, they support that relationship. The number of Pell-eligible first-year in-state students dropped from 45% in 2019 to 38% this fall, while 21% of out-of-state first-year students this year are Pell-eligible (the same as 2019).

In the years to come, scholars will no doubt examine the social and economic implications of numbers like those within the context of COVID-19. But for those on the ground of pandemic-era college recruitment in Arizona, which has the worst counselor-to-student ratio in the nation, there are already some plausible explanations.

“There were some students who were reluctant to go because they felt like they needed to go to work right away because their parents had lost jobs during COVID,” Bryan Pisetsky, a college counselor at Marana High School, said. On top of that, the message of college affordability didn’t always make it through the added social and emotional barriers of remote learning to the students who needed to hear it the most.

And if the almost-5% annual drop in American high school seniors who completed the Free Application for Federal Student Aid last school year is any bellwether, that wasn’t just happening in Arizona.

It’s one reason why Pisetsky is already planning in-person recruitment events this year.

Without that in-person support and guidance on how to fill out a FAFSA or pursue other aid and scholarships, Pisetsky said, “Students who are first-generation or low-income will look at the ($12,691 for in-state tuition) sticker price for a place like the University of Arizona and immediately decide they can’t afford it.”

Kathryn Palmer covers higher education for the Arizona Daily Star. Contact her via e-mail at kpalmer@tucson.com or at her new phone number, 520-496-9010.

With enrollment down nearly 20% at Pima Community College, the debt forgiveness program will allow approximately 4,500 students a new opportunity to re-enroll.

University of Arizona continues to make gains in student enrollment

After UA President Robert Robbins said the university would wait until ICU beds are at capacity before re-evaluating the need to shift classes online, more than 50 faculty members have asked for a more proactive approach.

Arizona Board of Regents' committee gave preliminary approval to the project, but final approval will come later this month.

For Star subscribers: Despite pandemic-related enrollment declines that led to $8 million in losses last year, the college has been able to avoid major cuts and layoffs with the help of an estimated $40 million in federal relief aid.

For Star subscribers: The University of Arizona will lead the newly launched Precision Aging Network, which aims to recruit 350,000 people to participate in the largest-ever study of normative aging brains.

Despite pandemic, UA’s international student enrollment on the rise

Of the roughly 49,000 students enrolled at the UA this fall, more than 5,400 are international students. 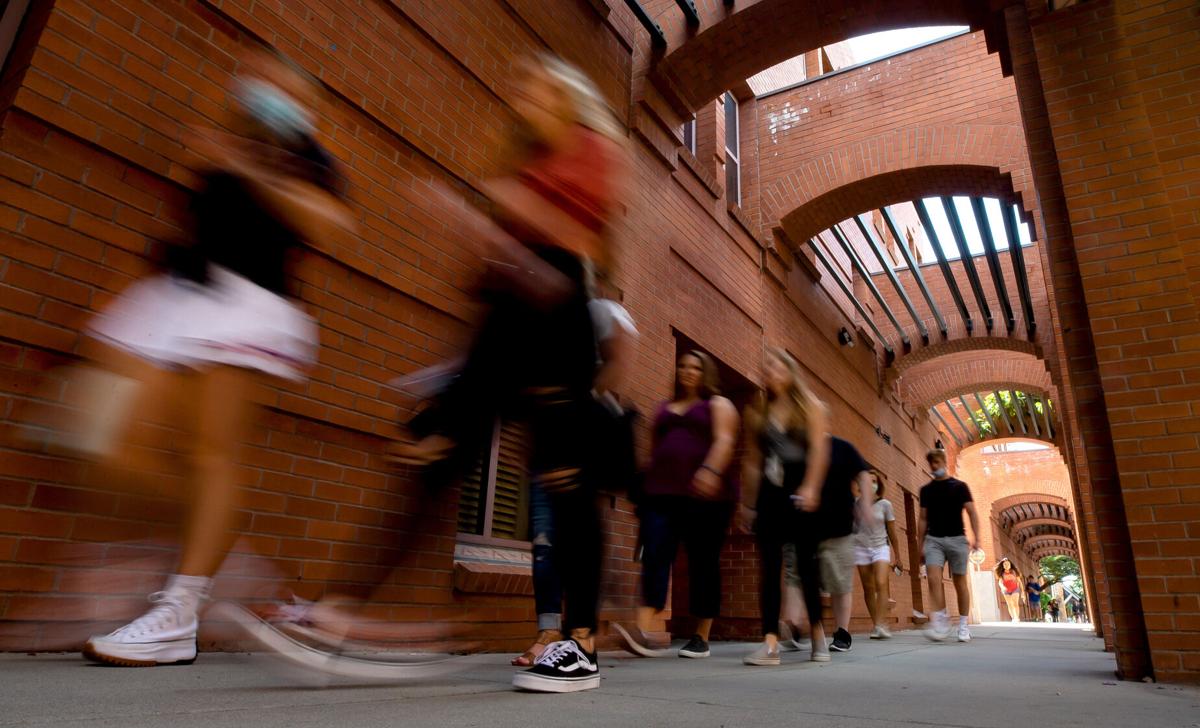 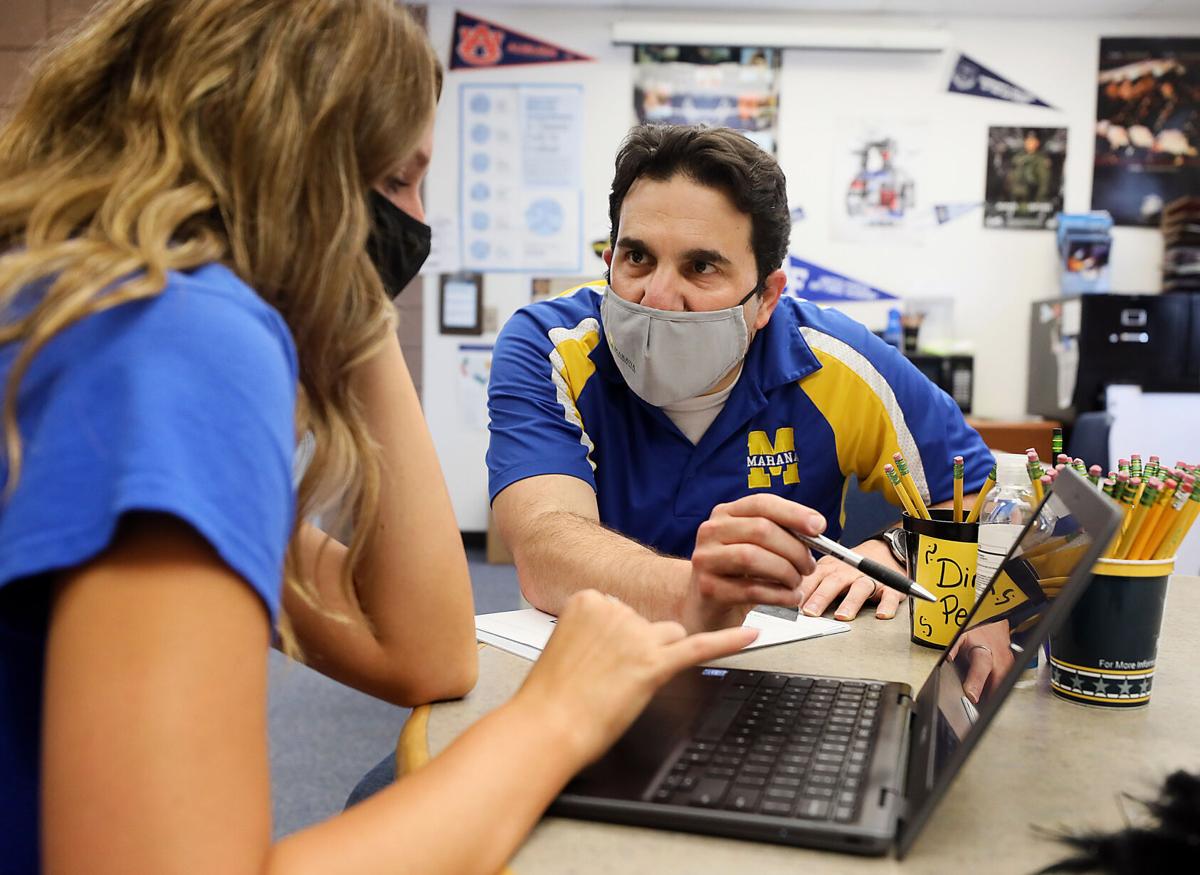 Bryan Pisetsky, a college and career counselor at Marana High School, talks to Stacia Hamilton, 17, about scholarships for college on September 2, 2021.