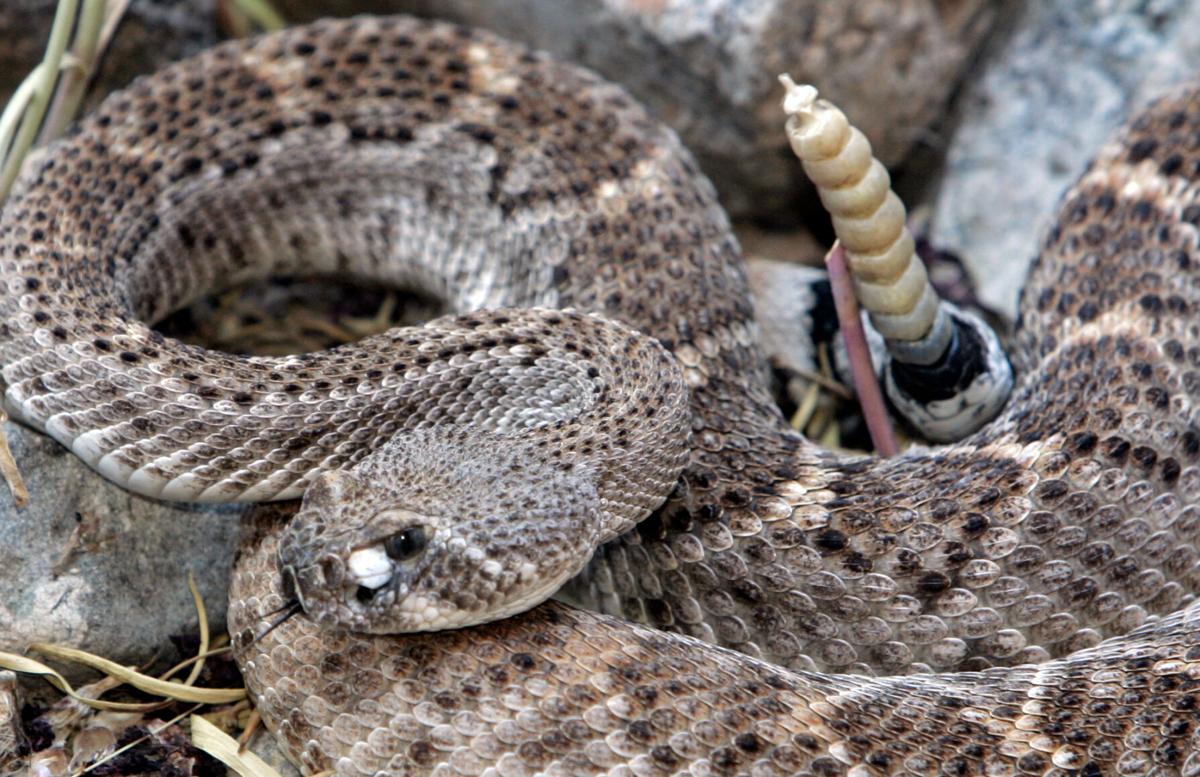 Golder Ranch Fire District has responded to 501 calls in the past 30 days, the district’s busiest stretch in at least five years. 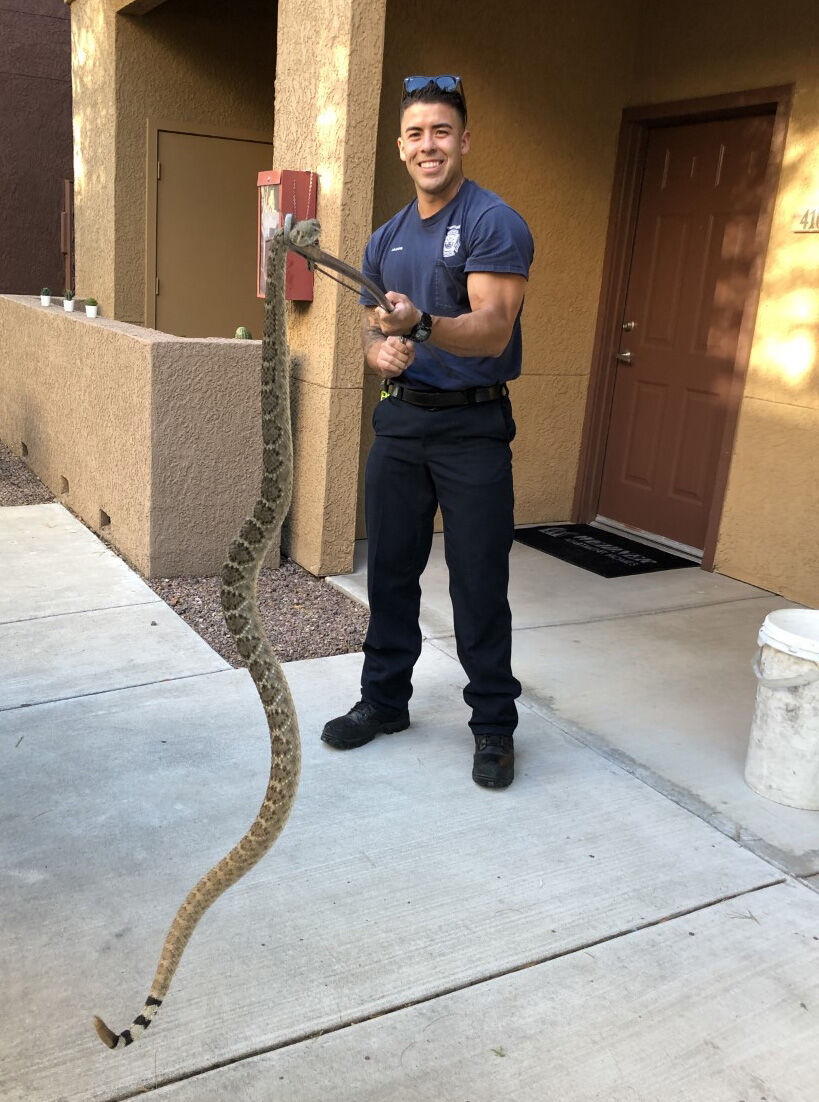 Golder Ranch firefighter Jacob Lopez holds a rattlesnake after catching it at a northwest-side apartment complex in 2019.

It’s been a hectic couple of weeks for the Golder Ranch “snake trucks.”

The northwest-area fire district has responded to 501 snake removal calls in the past 30 days. That’s the busiest stretch in at least five years for the district’s dedicated snake relocation service, according to Scott Robb, assistant chief of operations.

“I can’t find anything that compares,” he said.

All told, Golder Ranch has sent its snake removal crews out more than 1,575 times since the first day of summer. That’s about 15 calls a day in a 244-square-mile service area that stretches from North Ina Road to the mountains north of SaddleBrooke Ranch.

But on Monday, things got really crazy: two snake trucks chasing 30 calls in a single shift.

The cause of the recent jump is not entirely clear, though this year’s wetter-than-normal monsoon season is almost certainly a factor.

Robert Villa is president of the Tucson Herpetological Society and a research associate at the University of Arizona’s Desert Laboratory on Tumamoc Hill.

He said local snake populations are probably responding to the presence of water, which tends to make them and other reptiles more active.

This year’s wetter-than-normal monsoon season “caused a flourish in overall activity and productivity in plants and animals,” Villa said.

Snakes have likely “gotten a boost” as well, he said, though reports from around the area suggest their prey species still haven’t recovered from deep drought over the past two years.

Without some research to back him up, Villa is reluctant to speculate about what might be happening with the overall snake population. Their numbers could be way up, or the rise in sightings could be a mere “matter of perception,” he said — one caused by more people living on the fringes of the desert and spending extra time in and around their homes because of the cooler weather and the ongoing pandemic restrictions.

Oro Valley resident Debbie Engelmann found two western diamondbacks in her backyard near Oracle and Magee over the course of about five hours Tuesday morning.

Her boyfriend scooped up the first one with a snake hook and handed it over in a bucket to the Golder Ranch Fire District.

The second, smaller diamondback was hiding in the pot of a sweet potato plant, where it bit their dog, Pearl, on the face several times before the 50-pound Alaskan husky mix could back away.

Engelmann rushed Pearl to a pet clinic for anti-venom treatment. The dog is expected to make a full recovery, thanks to about $1,580 worth of emergency care.

Engelmann said she enjoys all the desert wildlife they see around their house, even the javelinas that like to knock over their garbage cans.

“But the rattlesnakes?” she said. “They’re terrifying.”

Other areas see spikes, too

Snake calls also have shot up in the neighboring Northwest Fire District, which covers the east side of the Tucson Mountains, the Flowing Wells area and north along Interstate 10 to the Pinal County line.

Northwest fielded 123 snake calls in September, close to double the 70 that came in during the same month last year.

Late spring is typically the busiest time of year for snake removals, followed by October, when young rattlers go looking to hibernate in places where homeowners might not want them, Walka said.

All these calls have not coincided with an increase in the number of people getting bitten by snakes, according to the Arizona Poison and Drug Information Center, which collects such data for all of Arizona except for Maricopa County.

Arizona typically leads the nation in the number of rattlesnake bites per capita. There were 100 bites reported in Pima County last year, more than any other county in the state.

The Golder Ranch Fire District has been relocating snakes for decades as a non-emergency service aimed at preventing future emergency calls.

Robb said fire crews also help residents change the batteries in their hard-to-reach smoke detectors for the same reason. If they can keep someone from getting bit by a rattler or falling off a ladder, that’s one less 911 response they have to make.

“It’s kind of a rite of passage for a Golder Ranch firefighter,” he said.

Academy cadets now receive a course in snake handling as part of their training. No staff member has been bitten by a snake while on duty.

The vast majority of removal calls involve rattlers, though they do get the occasional Gila monster.

When someone calls them about a nonvenomous snake, Robb said, they usually try to educate the resident about the benefits of keeping such reptiles around to help control rodents or even other snakes.

“Sometimes that education works,” he said, and sometimes residents just want the snake gone, no matter what kind it is.

The offending serpents are captured using long snake tongs and a bucket with a plexiglass lid that latches shut.

The removal crews also dish out free backyard snake-proofing advice, such as blocking gaps in gates and fences and reducing the availability of birdseed, standing water or other things that might attract rattlesnakes or their prey.

Robb said their captives are treated with a lot more care than they used to be.

A little over a decade ago, Golder Ranch rewrote its snake-handling policies to make them safer and more humane with the help of the Arizona Game and Fish Department and a former staff member from the Arizona-Sonora Desert Museum.

He said firefighters now try to pick the snakes up in the middle of their bodies instead of near their heads and release them into a wash or patch of desert within about 100 yards of where they are captured.

Move a snake too far, and its chances of surviving plummet.

“We try to strike the balance between keeping the customer happy and keeping the desert environment in balance,” Robb added.

Villa said the change in relocation protocols started in the 1990s, when a study by the Herpetological Society showed that snakes that are released a mile or more from where they are caught have a survival rate of just 20%.

In most cases, Villa would prefer to see people leave the reptiles where they are and learn to coexist with them.

“A lot of these snakes are moving through,” he said, or they’ve been there all along, living peacefully in your yard without you ever noticing.

“They aren’t programmed to seek humans out or attack humans. They rely on being inconspicuous or unseen,” Villa said.

It’s an inevitable part of desert living. Call the fire department all you like, but you’ll never be rid of rattlesnakes completely.

Golder Ranch Fire District has responded to 501 calls in the past 30 days, the district’s busiest stretch in at least five years.

Golder Ranch firefighter Jacob Lopez holds a rattlesnake after catching it at a northwest-side apartment complex in 2019.