The border near Tucson doesn't fit the mold of the crisis playing out in the Rio Grande Valley in Texas, according to federal data and local Border Patrol officials.

Broadly put, most of the recent migration in the Border Patrol's Tucson Sector involves adults from Mexico and Guatemala who are quickly expelled to Mexico. The Rio Grande Valley Sector, on the other hand, is seeing tens of thousands of families and children from Honduras, which prompted the Biden administration to rush to find temporary housing for them.

As policymakers issue statements and call for more action from the Biden administration, either to provide more support to migrant families and children or to resume strict policies from the Trump administration, they risk crafting policies that gloss over important differences in how the recent rise in border encounters is playing out in each area of the border.

Rather than deal with the details, the national political conversation focused on the 172,000 border encounters reported by Customs and Border Protection officials for March, which surpassed the peak of a similar increase two years ago. That number appeared repeatedly in headlines, cable news shows, and political debates as a shorthand for "Biden's border crisis."

When Gov. Doug Ducey declared an emergency in Arizona's border counties, he cited "more than 170,000 apprehensions at the Southwest border," rather than numbers for the Arizona border.

But the number of migrants encountered, how they travel, where they come from, and how federal officials deal with them vary among Border Patrol sectors.

Even within Arizona, the differences are stark between the border near Tucson and the border near Yuma, where thousands of adult migrants and families are coming from countries like Cuba, Venezuela and Brazil, according to Customs and Border Protection data. 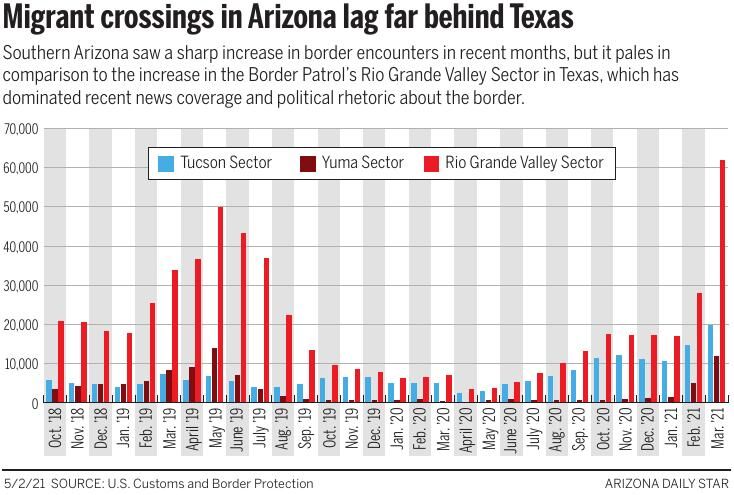 "Not the same border"

"This is not the same border as what you're seeing on the national news in the Rio Grande Valley," Modlin said. “Very different what’s going on over there and what’s going on here."

The clearest difference among the sectors is the total number of encounters. In March, the Rio Grande Valley Sector saw about 62,000 border encounters, compared with about 19,800 in the Tucson Sector and 11,800 in the Yuma Sector.

The sectors also differ in whether migrants travel in large groups, as adults without children, as families or as children without their parents.

In the Rio Grande Valley, agents often see large "give-up groups" that include 100 or more migrants flagging down Border Patrol agents, but that is much less common in the Tucson Sector, said Modlin. Instead, most migrants in the Tucson Sector are "actively trying to evade detection."

This is a sharp contrast not only among sectors, but also to the spike in asylum-seeking families in late 2018 and early 2019. During that time, the Tucson Sector chief's posts showed numerous large groups crossing the border southwest of Tucson, where they flagged down agents. Many of those groups were made up of families from Guatemala, Honduras and El Salvador.

Now, adults traveling without children account for most of the migrants encountered in the Tucson Sector, as well as in every Border Patrol sector except the Rio Grande Valley and Yuma, according to CBP data.

In March, single adults accounted for 78% of all encounters in the Tucson Sector, a much higher rate than the 27% in the Rio Grande Valley Sector and the 49% in the Yuma Sector. 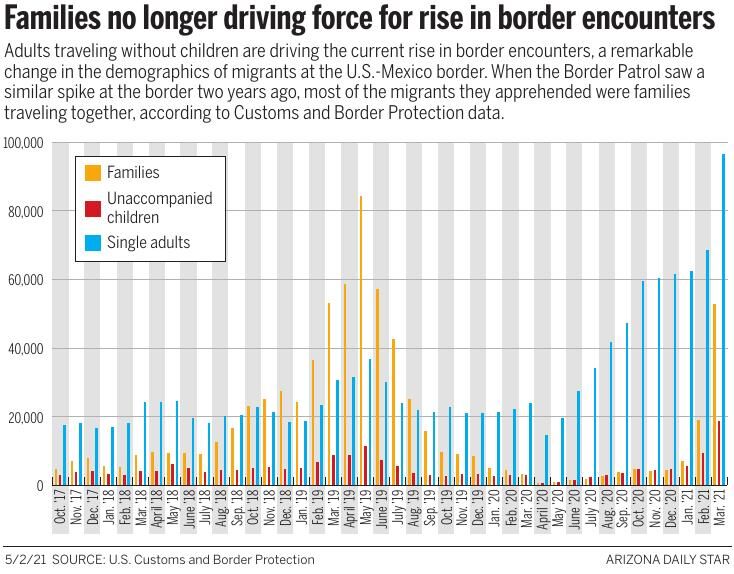 In terms of migrants traveling as families, "our numbers are quite small versus" the Rio Grande Valley Sector, Modlin said. "They are slightly going up, but we're nowhere near where we were."

Families accounted for 10% of all encounters in the Tucson Sector in March, well below the 57% in the Rio Grande Valley Sector and the 44% in the Yuma Sector.

Much of the attention paid to the border in recent months focused on children traveling without their parents, categorized by CBP as unaccompanied children. The Biden administration is scrambling to move those children from CBP custody to the Office of Refugee Resettlement, which places them with family or sponsors in the United States.

The Tucson Sector saw the number of unaccompanied children nearly triple from 865 in January to about 2,300 in March, which prompted CBP officials to award a contract worth up to $105 million to build and run a 80,000-square-foot facility to house them temporarily in Tucson.

Still, unaccompanied children accounted for just 12% of encounters in the Tucson Sector in March, compared with 16% in the Rio Grande Valley Sector and 6% in the Yuma Sector, where CBP built a facility similar to the one in Tucson.

The percentages among the three sectors are not too far apart, but the actual number of unaccompanied children encountered in each sector differs dramatically. In March, the Yuma Sector saw about 800, compared to about 9,700 in the Rio Grande Valley Sector.

The three sectors also differ dramatically in the nationalities of migrants.

With the statistics released this month, CBP started providing ongoing data about nationality for each sector, instead of the border as a whole. CBP grouped the data in a period covering Oct. 1 to the end of March, rather than monthly totals.

In the Tucson Sector, the most common nationality was Mexico, which accounted for 61% of all border encounters, followed by 30% from Guatemala, 4% from countries labeled as "other," 4% from Honduras and 1% from El Salvador.

The most common nationality in the Rio Grande Valley Sector was Honduras, which accounted for 38% of all border encounters, followed by 24% from Mexico, 22% from Guatemala, 12% from El Salvador and 4% from countries labeled as "other."

In the Yuma Sector, about 58% of border encounters involved migrants from countries labeled as "other," followed by 21% from Mexico, 10% from Guatemala, 8% from Honduras and 2% from El Salvador. The "other" category in Yuma is made up mainly of migrants from Cuba, Venezuela and Brazil.

Federal officials deal with migrants differently in each sector, particularly with regard to a pandemic public-health order known as Title 42. Under that order, which the Trump administration put in place in March 2020 and the Biden administration has maintained, officials can quickly expel migrants to Mexico.

The Mexican government generally accepts migrants from Mexico, Guatemala, Honduras and El Salvador, but not from many other countries, Modlin said, which “absolutely” explains why most of the families the Border Patrol released to local shelters were from Cuba, Venezuela and Brazil.

In the Rio Grande Valley Sector, officials expelled about 61% of the migrants they encountered, mostly single adults from Mexico, Honduras, Guatemala  and El Salvador. Officials also expelled about 17,000 family members and unaccompanied minors, mostly from Honduras and Guatemala.

In the Yuma Sector, officials expelled about 36% of the migrants they encountered. Single adults from Mexico accounted for nearly half of those expulsions. Nearly 2,300 family members from various countries also were expelled.

The next round of CBP statistics, which will cover border encounters in April, likely will be released in the first or second week of May.

No Border Patrol releases in Ajo since April 10

The Border Patrol has not released any asylum seekers in Ajo since April 10, says a memo from Pima County Administrator Chuck Huckelberry.

The county and local nonprofit organizations helped transport more than 600 asylum seekers to a shelter in Tucson after the Border Patrol started releasing them in Ajo on March 19. Most of the asylum seekers were from Brazil, Venezuela and Cuba and traveled as families.

The Casa Alitas Welcome Center in Tucson, which is part of Catholic Community Services, still receives about 40 individuals per day after they are released by the Border Patrol in Yuma or by Immigration and Customs Enforcement, says Huckelberry’s Thursday memo.

The Border Patrol releases some migrants to reduce exposure to the coronavirus in detention centers.

"Tucson Sector has only released family units on a case-by-case basis," says a statement from the Border Patrol. "Generally, family units have either been expelled to Mexico under Title 42 or transferred" to ICE facilities for immigration proceedings.

Since March 19, six asylum seekers released in Ajo tested positive for COVID-19. They are transported separately and placed in isolation in hotel rooms.

PHOENIX (AP) — Arizona National Guard troops being sent to the border region will focus initially on the Yuma area but could eventually expand to other areas, Gov. Doug Ducey said Wednesday.

Pima County to get $2.1M to cover costs of asylum seekers

CBP promises to hold an open house, for public comment, before its tent-like facility to house migrants opens in Tucson.

WASHINGTON (AP) — The Biden administration has struck an agreement with Mexico, Honduras and Guatemala to temporarily surge security forces to their borders in an effort to reduce the tide of migration to the U.S. border.

FILE - In this March 30, 2021, file photo, young minors lie inside a pod at the Donna Department of Homeland Security holding facility, the ma…

Mexico expects a 'constant and growing' flow of migrants

White people have been vaccinated against COVID-19 at a higher rate per capita than any other racial or ethic group in Arizona. More of them qualified for the vaccine from the start. 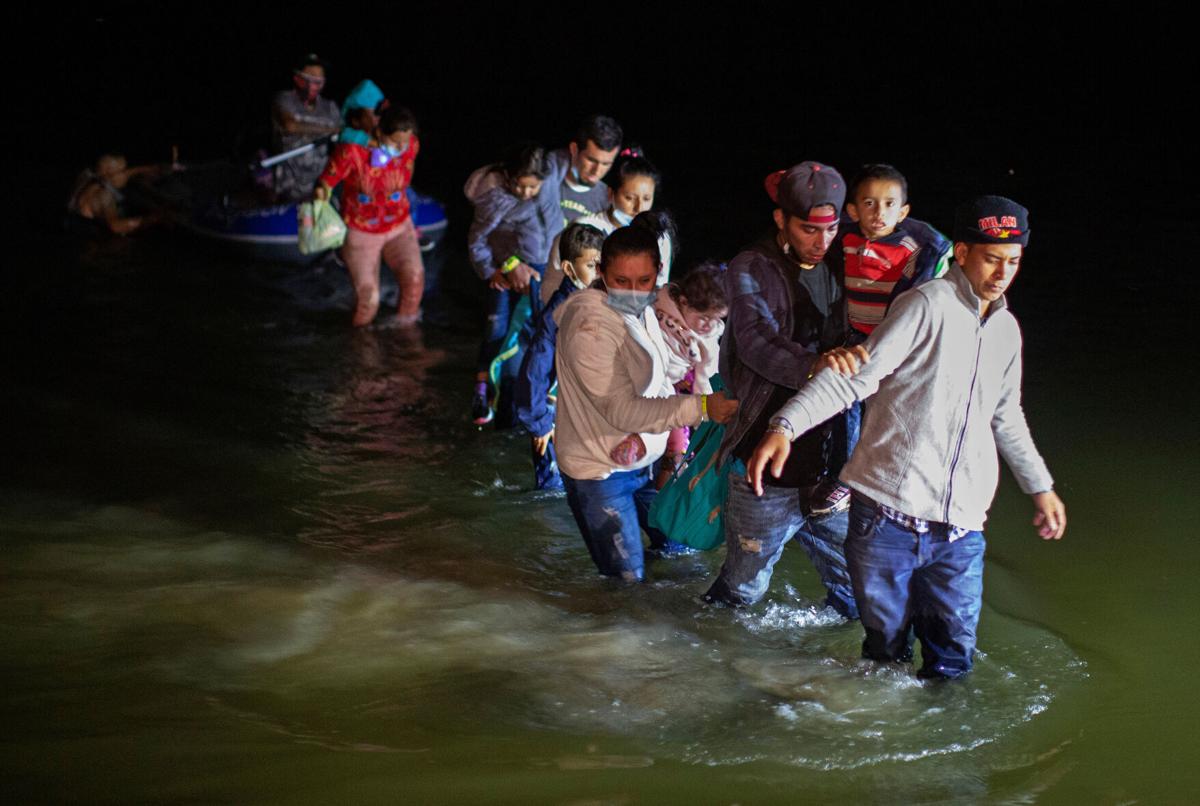 Migrant families, mostly from Central American countries, wade through shallow waters after being delivered by smugglers on small inflatable rafts on U.S. soil in Roma, Texas. The situation is different in the Border Patrol’s Tucson Sector, where most of the recent migration involves adults from Mexico and Guatemala who are quickly expelled to Mexico, federal data shows. 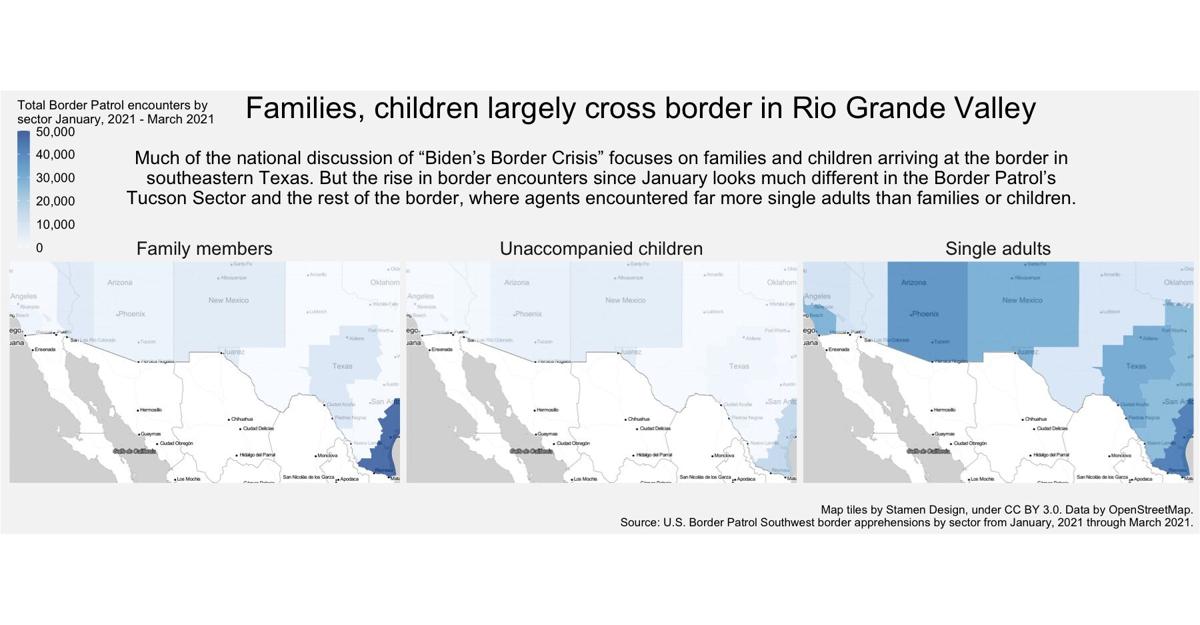 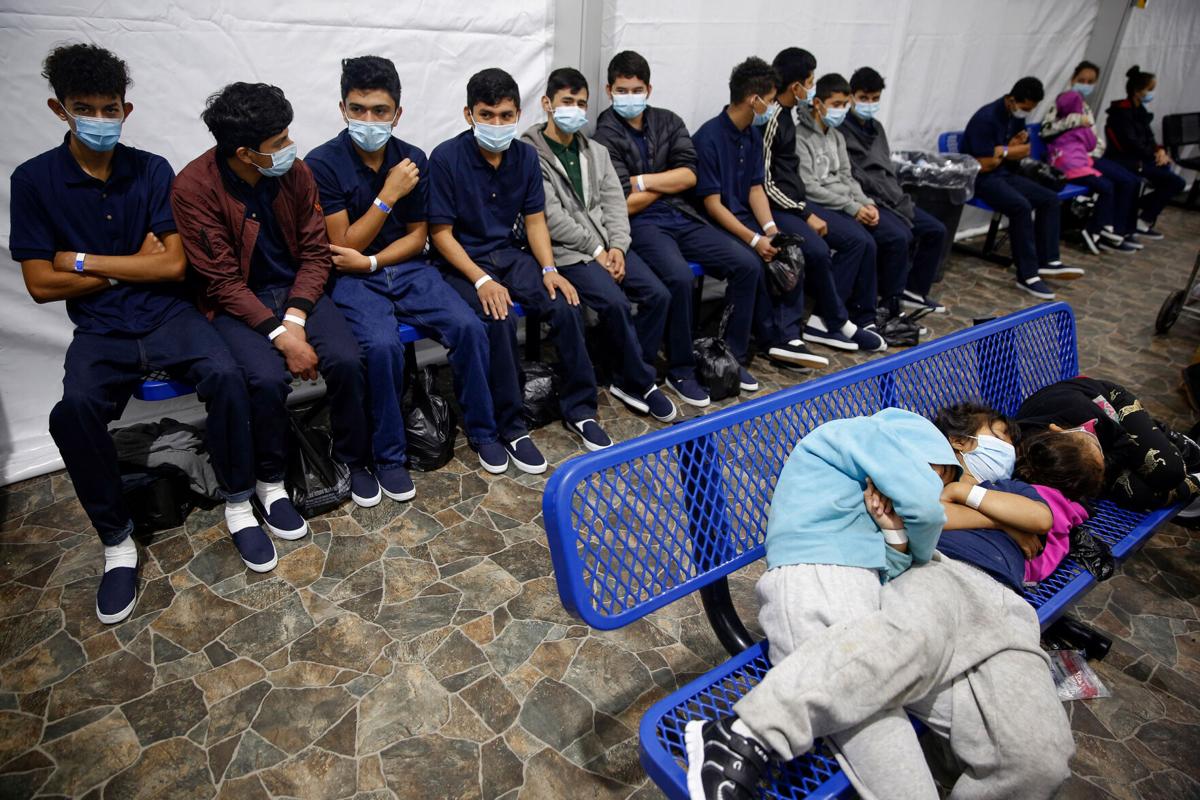