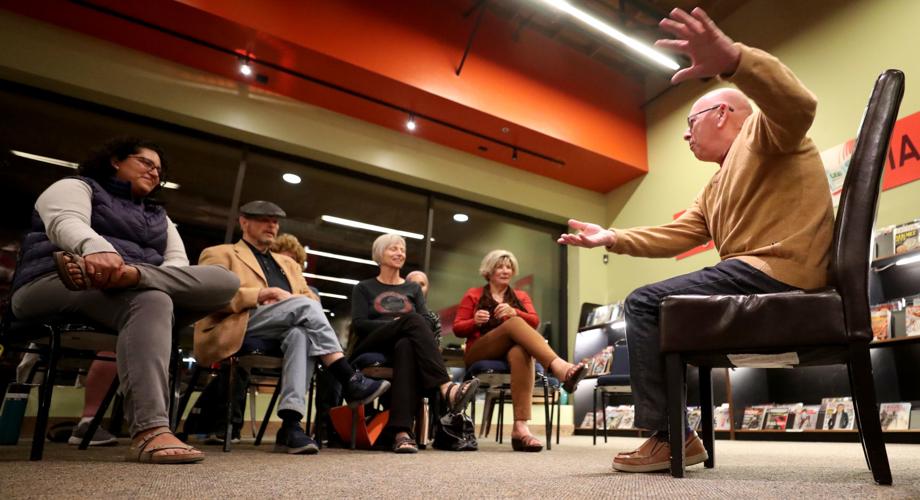 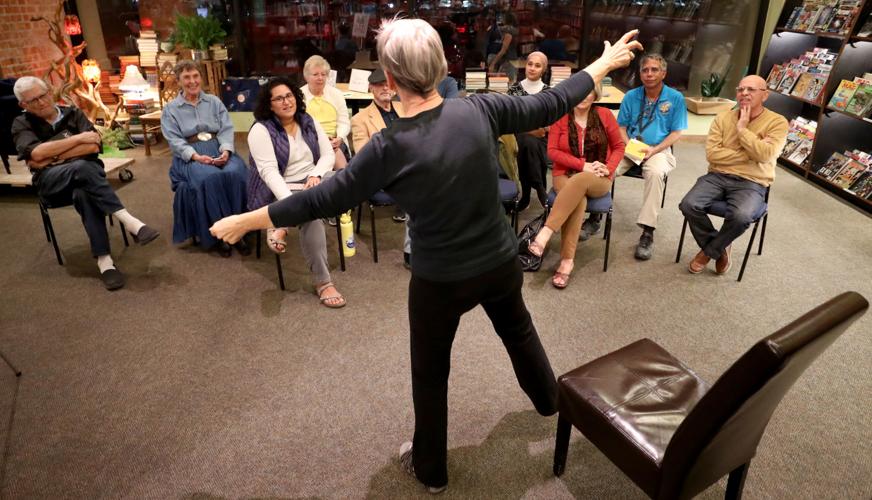 Liz Barta relates her story to the group gathered for the Teller of Tales Tucson monthly Story Swap.

In 1951, Ron Lancaster was just a boy, unhappy about having to temporarily live in the Spanish Trail Motel with five other family members.

It was Christmastime and young Ron was particularly excited because his aunt Lola was coming to visit.

He wanted to be just like her when he grew up — she was a waitress in Las Vegas, which young Ron thought was the greatest career in the world.

Lancaster is now a storyteller for the Tellers of Tales Tucson, a live storytelling group. The story of how Aunt Lola made his 1951 Christmas a memorable one is among Lancaster’s favorites to tell.

The group, which started independently and is now a local chapter of the National Storytelling Network, is coming up on its 40th year. Tellers of Tales Tucson hosts monthly events to tell oral stories to the community, in addition to other events with organizations throughout Tucson, such as the annual Tucson Festival of Books.

Stories are generally 10 minutes long with an uplifting theme, ranging from humor and personal stories to history and fairy tales. They’re never political, religious or inappropriate.

“A librarian started (the chapter) 40 years ago and it just blossomed,” Lancaster says. Lancaster is a longtime board member of the group and was once the president. He also used to own a storytelling nightclub in California.

“There’s something about stories. They place people in a comfortable position,” he says.

Lancaster says live storytelling, in comparison to reading a story in a book, is important because it allows tellers to connect with the audience.

“It’s coming out of the lips and straight to the heart,” he says. “When you’re listening and it’s interesting, you’re glued in.”

“It’s also a different way of art,” current president Nooshie Motaref says. “The art of storytelling is touching — feeling and being with people and enjoying the company of being with a group.”

Motaref, who is a published author and studied in four countries including her home country of Iran, says the storytellers come from all different walks of life — from comedians to scientists to college professors.

“They all have the common need to share their stories, no matter their background,” Lancaster says.

To celebrate their 40th year, Tellers of Tales Tucson is taking part in a worldwide “Tellabration.” Tucson’s version of the event will feature eight storytellers — two telling fairy tales and six telling personal stories. Tickets to the event, to be held Sunday, Nov. 24, at Unscrewed Theater, are $5.

“The people that started (the local chapter) knew there was a need for storytelling,” Lancaster says. “It’s warm — it feels warm that we are together, we gather and tell each other stories.

“We’ve been together because we love to share stories,” he says. “I don’t know which came first — the campfire or storytelling.”

What: Tellers of Tales Tucson's "Tellabration."

Four years ago, Chris and Rose Faitsch lived in a 1,000-square-foot apartment space inside the building that houses the Maracana Indoor Sports Arena.

Derek Leahy is driven by his desire to give back to the skating community.

Game and Fish says these midtown coyotes crave fruit from date trees in the neighborhood.

The mission served close to 2,500 meals for last year’s holiday.

From an east-side craft beer haven that offers moonlight bike rides, to a brewery that sells its own cycling merch and another launched by two…

Visitors of the Flandrau Science Center & Planetarium are in for a flurry of activities at Sunday’s sixth annual Chess and Science Festival.

UA vs. ASU: See who wins on The Price Is Right's college rivals special

The UA/ASU rivalry won't just be on the football field this week — it'll also be on the televised competition The Price Is Right.

Liz Barta relates her story to the group gathered for the Teller of Tales Tucson monthly Story Swap.