A new financial institution has opened at the scorned corner of Grant and Alvernon.

No, it’s not another car-title-loan office — the corner already has two of those — or a check-cashing shop. Or a loan shark.

It’s a branch of the banking behemoth Wells Fargo, on the northeast corner of the intersection, near the Walmart Neighborhood Market. Wells Fargo shut down its branch in a 30,000-square-foot building it owns at 3655 E. Grant Road and moved a few blocks west to the worn down intersection of East Grant Road with North Alvernon Way, opening Nov. 25.

Seems surprising — unless you dig a little deeper into what really ails the intersection. The phrase “Grant and Alvernon” has become synonymous in midtown Tucson with crime and social problems. Despite that, the place has a lot of potential and one major issue holding it back — traffic.

That didn’t stop Wells Fargo from embracing it — in fact, that was one of the reasons for the company’s decision.

“As you may know, this is a high-traffic area that is expanding,” bank spokeswoman Liana Enriquez wrote me in an email. “Not only did the move make sense logistically, Wells Fargo is committed to reinvesting into the communities we are a part of.”

And they’re not the only ones finding the corner a good site for expansion. Vasa Fitness opened a massive new gym Oct. 26 in the old Fry’s supermarket site on the southeast corner of the intersection, the growing chain’s first location in the Tucson area. At 55,000 square feet, it’s big enough to hold a full basketball court, a 23-meter pool and some amenities I couldn’t even grasp, not being a fitness connoisseur.

General Manager Erin Niss gave me a tour of the place Thursday. She said the location already has close to 5,000 members and has had few problems with unwanted visitors.

Pedestrians with problems, drug abusers, people crisscrossing the intersection and wandering the parking lots — these are what gave that corner a bad reputation among some Tucsonans. The idea spread enough that Adam Lehrman made a T-shirt emblazoned simply with the words “Grant & Alvernon.”

Lehrman, who runs the Tucson Foodie website, explained the T-shirt was just meant to commemorate a “crazy intersection.” But the T-shirt gave rise to pushback from some people who argued he was mocking poor and disadvantaged people, like the many refugees, disabled people and others who use the sidewalks and the bus stops there.

The Tucson Botanical Gardens, which is just south of the intersection, even printed up a T-shirt in response, similar in style, that reads “Good things grow at Grant + Alvernon.”

What I have found, in several recent rounds of visiting the intersection and in 23 years of traversing it as a midtown resident, is that the intersection looks a lot weirder when you drive through it than when you are walking there.

I met a woman named Sylvia Rosas on Thursday when she was pulling a basket of cleaned laundry and a few grocery items across Grant Road, headed back to the bus stop to catch the 11 southbound. She prefers the Northgate laundromat in the Walmart shopping center even though she lives several miles south. When I asked her broadly about Grant and Alvernon, she called the intersection “terrible.”

When I asked her to elaborate, she said, “The intersection is terrible for traffic.” She also had a couple of complaints about unclean restaurants and added, “I’m a Fry’s shopper, and I do not like to shop at Walmart.”

When I asked if she had trouble with the people walking around there, she said no.

This helped to confirm in me an impression I’ve gradually been coming to — the intersection may look a little weird by Tucson standards, but the main problem there is vehicle traffic, not the people out walking and biking around.

In fact, the very thing that makes it unusual and the subject of mockery — a lot of pedestrians — is key to making it a vibrant intersection, if the traffic problem can be fixed.

Steve Benjamin and his brothers knew what they were getting into when they bought the Walmart shopping center in October 2015 — or they thought they did. Before closing on the sale, they learned that East Grant Road was scheduled to be widened and the intersection re-designed. They knew the city would take part of their property and that the Burger King on the corner might be sacrificed. They were fine with all that.

But they were told the work would start in 2017, Benjamin said in an interview from northern California, where he lives.

“Because of the city’s delay and because the city is not able to be time-specific, they are creating blight on Grant Road,” Benjamin said. “What tenant will locate there knowing the project is coming but not knowing when it will start and when it will finish?”

Benjamin’s latest frustration came in October this year. He flew down to Tucson to meet with a city appraiser about how much land the city wants to take for the new road, and how much the city is offering for it. Instead, he was told that a new redesign of the intersection for pedestrian and cyclist improvements has delayed the land-purchase process.

“I have no ability to rely on whatever the city tells me at this point,” Benjamin said.

One thing he’s not worried about is the closure of his anchor tenant, the Wal-Mart Neighborhood Market — a rumor that has circulated since the Walgreens, Fry’s and Circle K closed. Previously, the company told me it plans to honor its lease and reevaluate at the end as necessary. Benjamin said the current lease ends in 2025, and the company has the option of 60 years worth of five-year extensions after that.

When I asked city officials about the delay in the Grant Road project, they said that they did a new count of pedestrians this summer, at the request of the city’s pedestrian and bicycle advisory committees, and found the existing design wasn’t up to handling the number of people who walk and cycle through the intersection. Their redesign is delaying the process a couple more months.

For now, phases 3 and 4 of the Grant Road improvement project, the phases that include Grant and Alvernon, are still scheduled to begin in 2021.

Till the work is done, the intersection is likely to muddle along — not plunging into calamity, but not fully prospering either. In short, it is reflective of the neighborhoods around it, and of Tucson in general.

Lt. James Brady of Tucson police looked up for me data on reported crime at that intersection and the surrounding quarter mile. This preliminary search found that calls for service had dropped from, roughly, a bit over 1,000 in 2018 to a bit over 800 so far in 2019. That reflects broad crime trends in the city as a whole, Brady said.

He and I met at the Filiberto’s restaurant near the intersection and took a little walk out on Grant Road.

“If you were to stop and look, the Subway, the pawn shop, the Walmart — there isn’t anything that remarkable about it,” Brady said. “Yes, the Circle K is closed and the Walgreens is closed, but if you look at it, it’s just another intersection.”

He was a bit mystified about all the attention the intersection has received, and, frankly, now I am too. If you fix the roads and accommodate the people on foot and bicycle, Grant and Alvernon might be even better than unremarkable.

A Wells Fargo branch recently moved into a complex at Grant Road and Alvernon Way, an intersection that has had a bad reputation in the past. 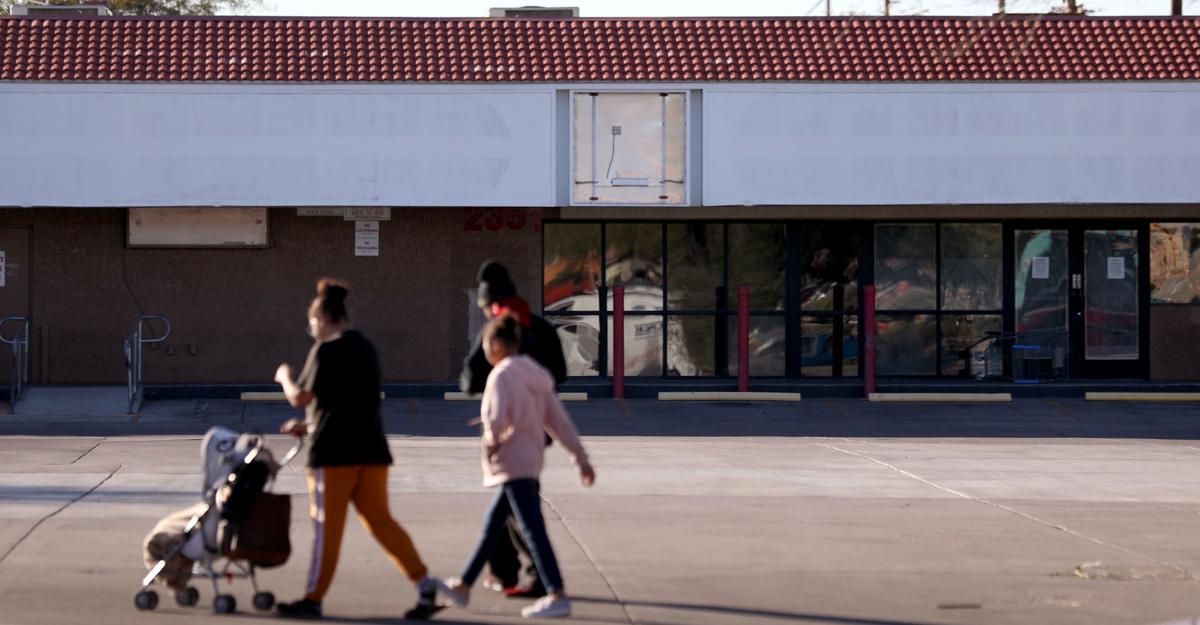 Pedestrians stroll through the parking lot of the former Circle K at Alvernon Way and Grant Road. The Walgreens and Fry’s also closed at that intersection. 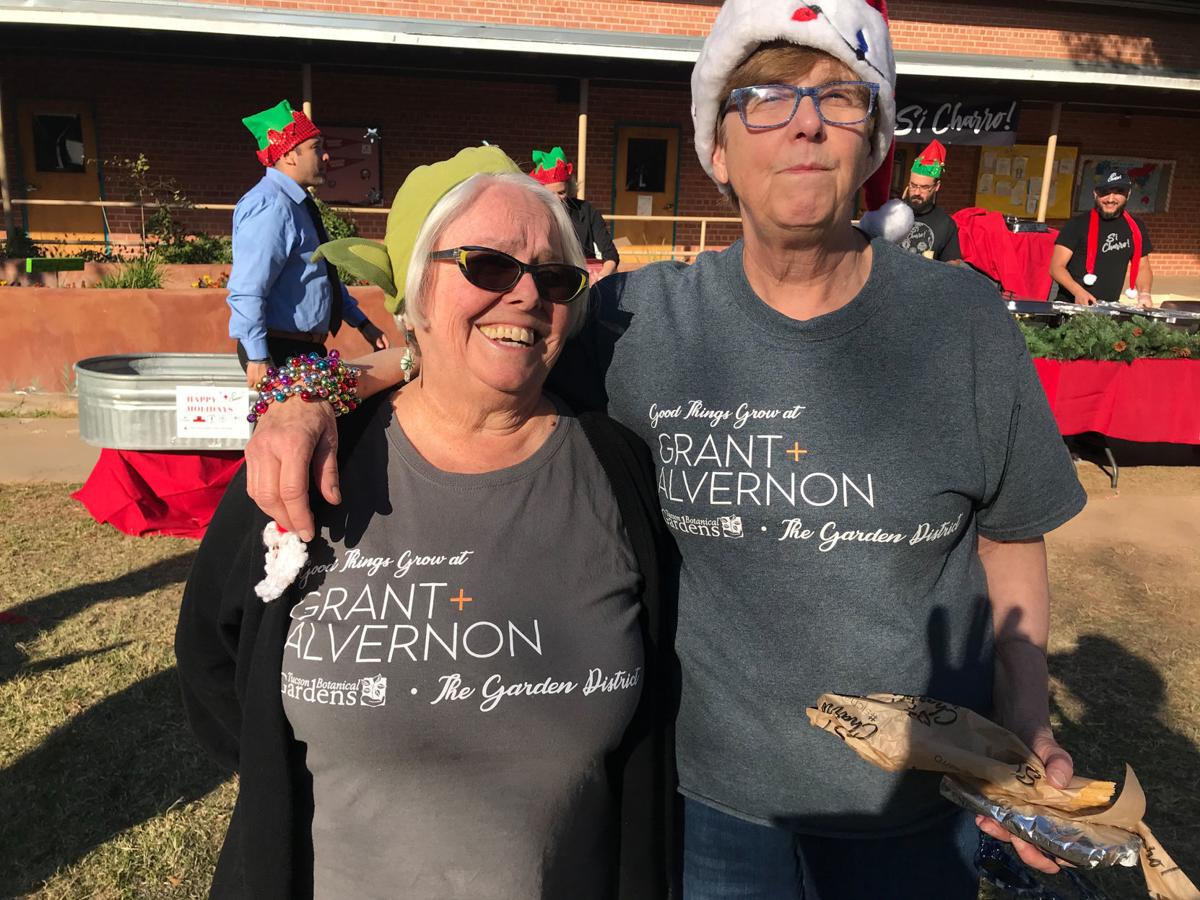 Residents have hope for the neighborhood and have “Good things grow at Grant + Alvernon” T-shirts to show it.

A pedestrian uses her cellphone while negotiating the crosswalk at Alvernon and Grant, Tucson, Ariz., December 19, 2019. 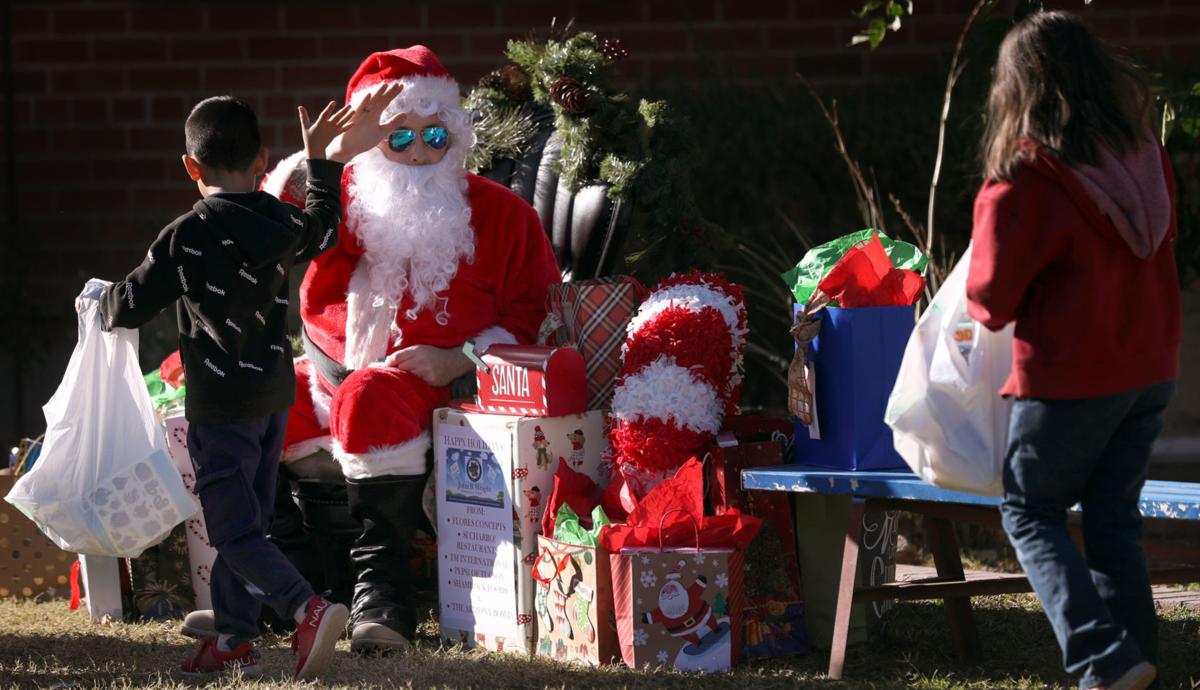 Santa deals out high-fives to the 500 students at John B. Wright Elementary School, which is in a neighborhood near Alvernon Way and Grant Road.