When it came to weather, Tucsonans experienced a bit of a roller-coaster ride in 2019.

For the first time in five years, the average yearly temperature didn’t rank in the Top 5 warmest on record, according to the National Weather Service. In 2019, Tucson saw its 17th-hottest year with an average temperature of 70.3 degrees. The previous record for the hottest average annual temperature was 73.3 degrees in 2017.

The normal average annual temperature for Tucson is 69.4 degrees. Although Tucson saw lower temperatures than the past five years, the average yearly temperature still came in at above normal for the 21st consecutive year.

Even with a disappointing monsoon, 2019 brought 13.62 inches of rain, which is just over 2 inches above normal. As the 25th-wettest year on record, recorded at the Tucson International Airport, most of this rain came at the beginning and the end of the year.

The year began with a rainy winter and brought blankets of snow throughout Tucson on Feb. 22, making it the ninth wettest and eighth snowiest February.

“We started off wetter than normal as we had a fairly wet January and February and that continued a little bit in the early part of spring,” said John Glueck, senior meteorologist at NWS Tucson.

“The most notable part about spring was that May was really cool and wet.”

For the first time on record, the wettest day of the year was in May, bringing in 1.10 inches of rain May 11.

2019’s highly anticipated monsoon brought little rainfall in June and July. August, which is typically the wettest month of the summer, saw just over 1.5 inches of rain, falling 0.80 of an inch below normal. To the surprise of climate experts, September wrapped up the season strong with 2.6 inches of rain, bringing the grand total up to just over 5 inches.

“This year’s monsoon was kind of erratic and on the dry side, but I think we were overdue for a down monsoon,” Glueck said of 2019. “We had pretty active monsoons the previous five years, but, you know, for the most part the monsoon was not the greatest.”

Due to late rains, Tucson saw its second-hottest summer on record. It was also the 11th straight summer to be ranked in the Top 10 hottest. The end of the year brought more rain, with 2.32 inches in November and 1.20 inches in December. November 2019 had seven days of measurable rain, which is the most that has been seen for this month since 1944.

Through the spring, the CPC forecasts above-normal temperatures and below-normal rainfall, which is much different than what Tucson experienced in 2019.

The center is also predicting equal chances for normal, below-normal or above-normal rainfall for the remainder of the year.

While Tucson seemed to overcome the temperamental monsoon of 2019, most of Northern Arizona and other areas of the Four Corners region are experiencing a pocket of moderate and severe drought.

Even with a series of storms and snow in recent weeks, the latest federal map shows that Coconino County, Mohave County, Navajo County and Apache County are experiencing these abnormally dry conditions.

Experts say that things are still better than they were at this time last year, when exceptional and extreme drought had set in over these areas.

The end of a decade

For Tucson, the 2010s are recorded as the warmest decade on record with an average temperature of 71.3 degrees.

Even with higher temperatures, the 2010s are ranked as the sixth-wettest decade with an average of 11.31 inches.

This decade brought in 22 more inches of rain than the 2000s, which was the driest decade on record.

Here are some 2019 weather highlights for Tucson:

May — Second wettest May on record.

June — Only month that did not register measurable rain at airport.

Monsoon awakens after nearly dry July, will be playing catch-up rest of season

July brought in about an inch of rain as of Wednesday afternoon, which is low compared to its normal 2.25 inches.

Residents should expect mostly sunny and dry conditions through the weekend.

In her first action since being elected as mayor of Tucson, Regina Romero said she wants the community to know that gun violence and public safety are her top priorities.

Research into alternative treatments for mild traumatic brain injuries being funded by the Army.

Tucson saw its 17th-hottest year with an average temperature of 70.3 degrees. The previous record for the highest average annual temperature was 73.3 degrees in 2017. The average yearly temperature came in at above normal for the 21st consecutive year. 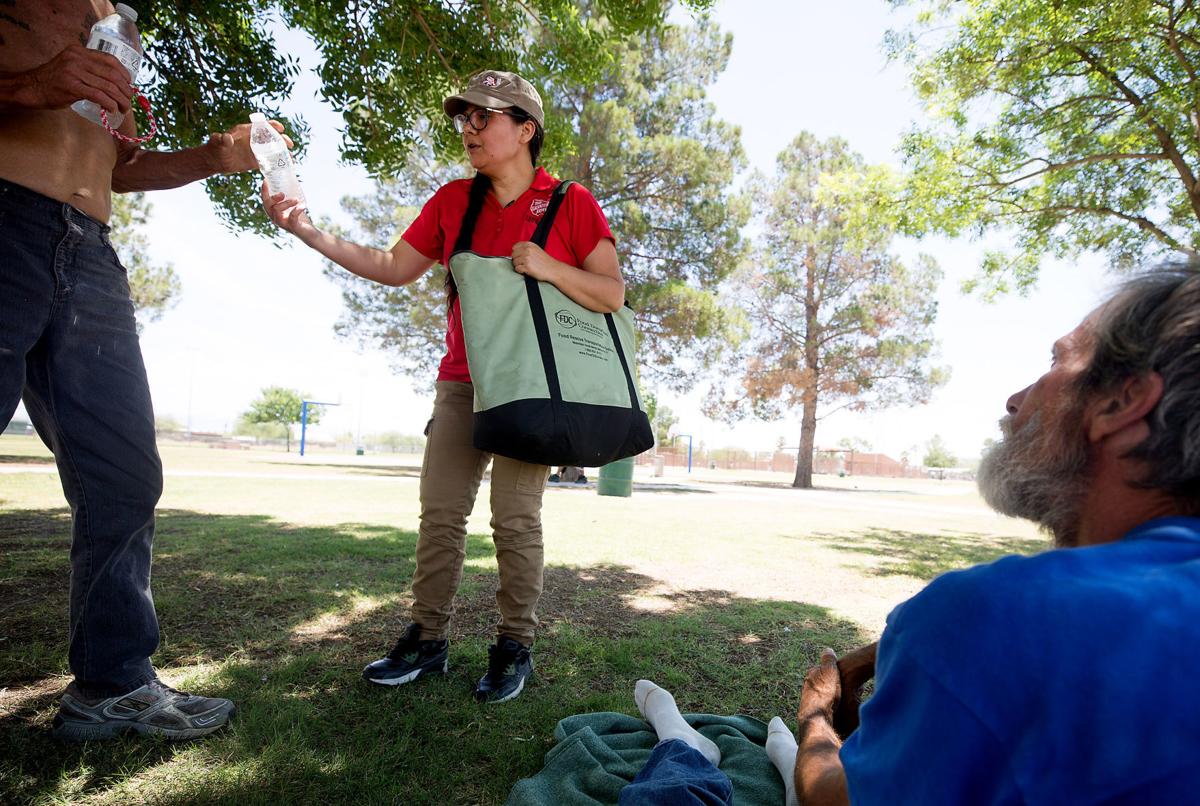 Glenda Avalos, center, public relations director with the Salvation Army, hands out water, hats and sunscreen to people in Santa Rita Park as part of Operation Chill Out on June 11, 2019. When outside temps reach 102 degrees, volunteers with the Salvation Army will head out to parks to handout heat related items to homeless people trying to stay cool under trees and give out information about where they can go for more help. 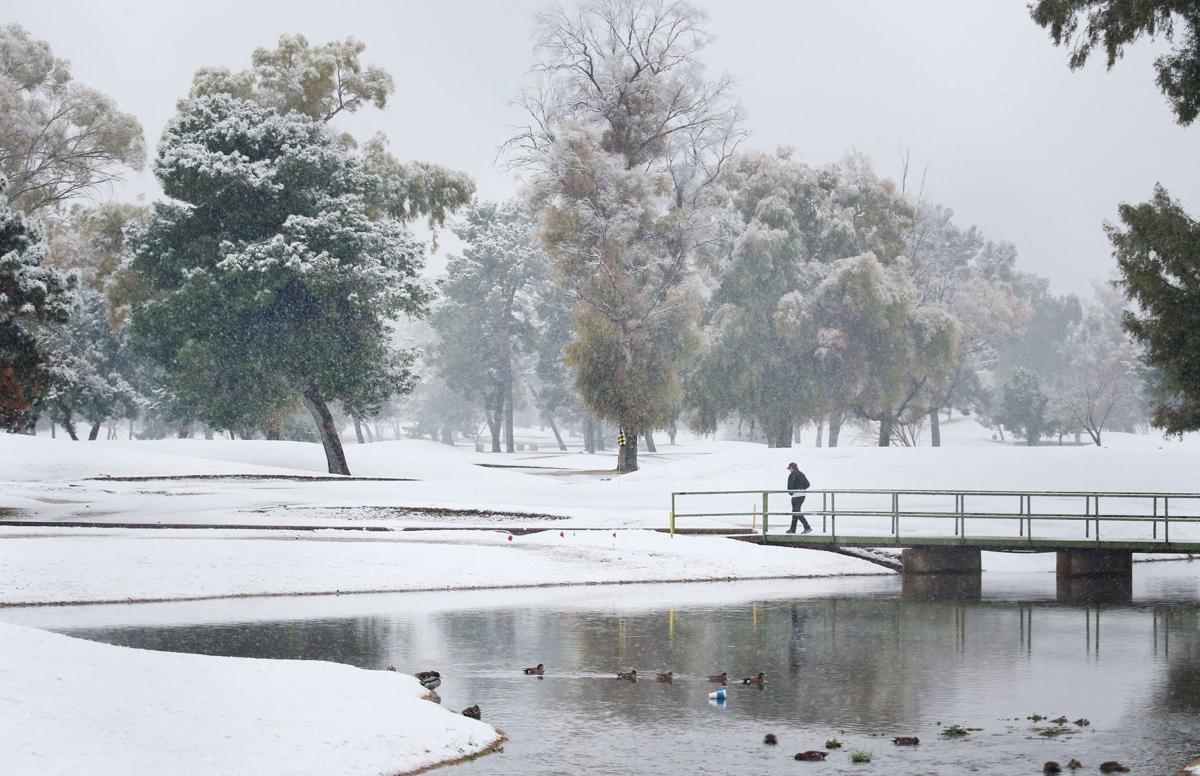 2019 began with a rainy winter and brought blankets of snow to Tucson on Feb. 22, making it the eighth-snowiest February. Tucson’s normal average annual temperature is 69.4 degrees.