‘Trust the process’: Why Arizona AD Dave Heeke decided to give Kevin Sumlin more time to get it right
Share this
1 of 2 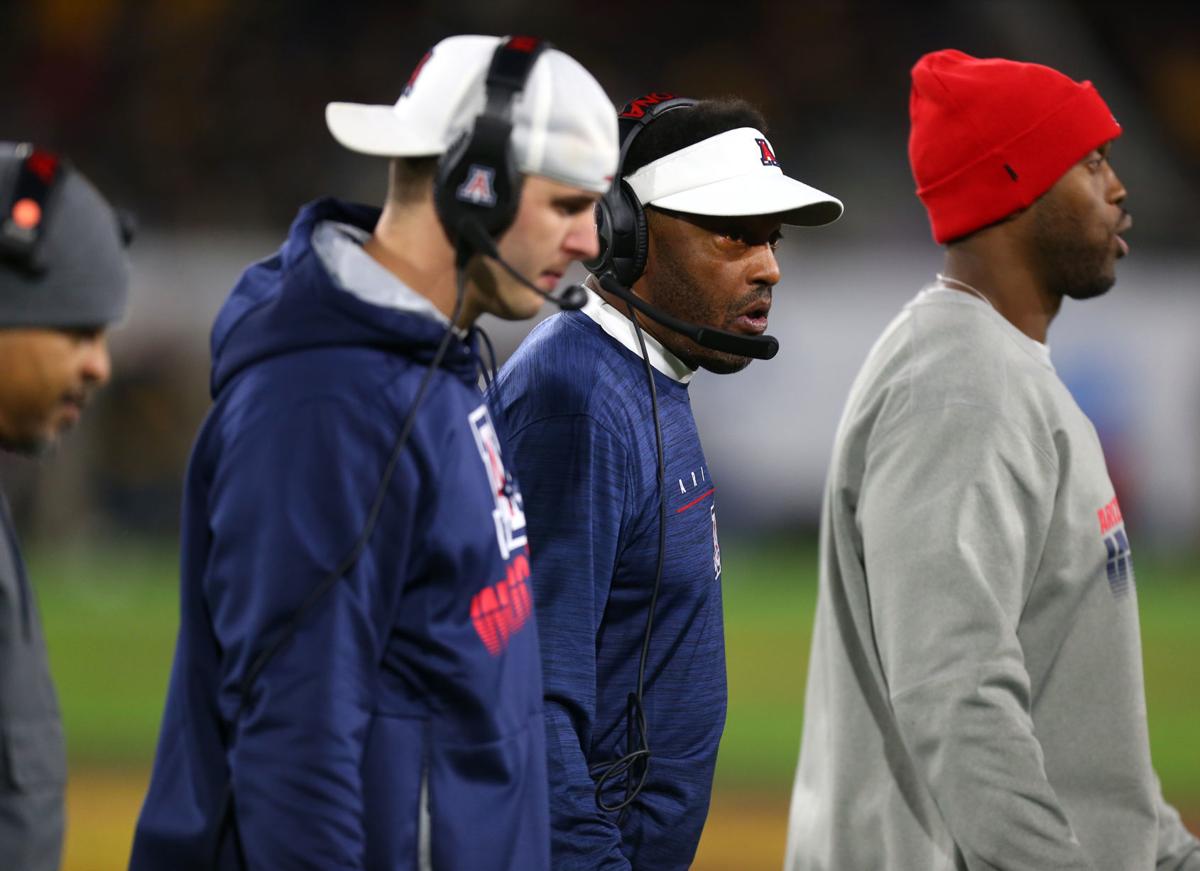 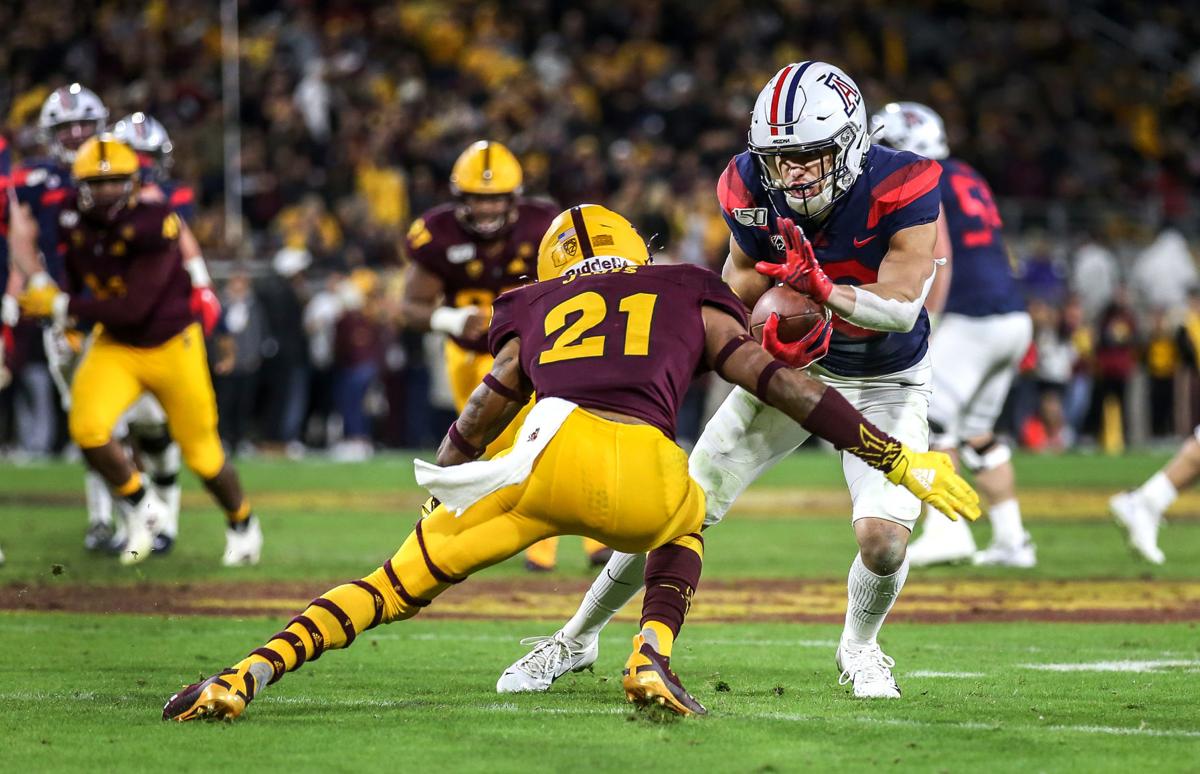 Wide receiver Cedric Peterson, right, and the Wildcats finished the year 4-8 after a 4-1 start.

The clock ticked past midnight. The calendar flipped to December. Many disgruntled Arizona Wildcats fans hoped the program would turn the page.

But when UA athletic director Dave Heeke met the media for an impromptu scrum in a hallway near the visitors’ locker room at Sun Devil Stadium late Saturday night — sorry, early Sunday morning — that was not the message he delivered.

Instead, Heeke doubled down on his support for embattled coach Kevin Sumlin.

Sumlin had just delivered his final 2019 postgame news conference, which followed Arizona’s seventh consecutive defeat. The Wildcats’ 24-14 loss to rival Arizona State in Tempe dropped their record to 4-8, 2-7 in the Pac-12. They are 9-15 in two years under Sumlin.

Heeke said he wanted to “make it real clear that as we embark into Year 3 of this rebuild program, Coach Sumlin’s our head football coach. We’re not where we want to be. This is not where we wanted to be at this point. But we’re committed, as you heard Coach say, to the process, moving this thing forward, moving into Year 3.”

If Heeke and the UA administration had decided to move on from Sumlin, the coach would have been owed a $10 million buyout — half due within 30 days, the other half by January 2023. It’s unclear how much influence, if any, the buyout had on the decision to retain Sumlin.

Sumlin also emphasized “the process” while addressing the state of the program after the ASU game. He pointed to his track record, which, before his arrival at Arizona, included only one losing record in 10 seasons as a head coach. Sumlin also recruited at a much higher level than he has so far in Tucson.

“People, including myself, care very, very deeply about this program,” Sumlin said. “There are a lot of things that go into it and a lot of work that’s involved. The way you get better is through recruiting and player development. That’s where we are.

“Is it frustrating? Yes. I know fans are frustrated. But we’ve gotta trust the process. We have a process in place that I believe in and a lot of our players believe in.

“You watch all these games, our guys don’t quit, they play hard. You start there. We’ve gotta execute better. We’ve gotta keep developing players and fix some things. That’s my job. It’s my job to fix things. I know the fans are frustrated, but believe me, we are frustrated (too).

“The way that you handle these situations becomes important, what you do. Because you can’t go back and do a bunch of different things.”

Sumlin can’t change what already has transpired, but he is in the process of altering the composition of Arizona’s coaching staff and roster.

Sumlin dismissed three defensive coaches during the season, including coordinator Marcel Yates. Sumlin said he would like to have a new coordinator in place sooner than later because of the recruiting calendar; the early signing period begins Dec. 18.

“But we want the right people,” Sumlin said. “Sometimes the timing of that is a little bit different. But it’s more important, I think, to have the right person instead of just racing to get somebody in here.”

Like last year, which also ended without a bowl berth, Sumlin and his staff hit the road to recruit the day after the finale. Sumlin said he had in-home visits lined up with a pair of prospects in Arizona. Four of his assistants were scheduled to see in-state recruits Sunday, while another was headed to Georgia.

They can sell the idea of immediate playing time. They can’t pitch prospects on the program’s prosperity — at least not yet.

“It’s not where we want it to be,” Heeke said. “I think you’ve heard Kevin say that, you’ve heard players say that. This isn’t what we planned to do.

“But it is what it is. And it is part of the process. Sometimes it’s real difficult to be in the pipe, kind of stuck in there. We’ve got to keep pushing through.”

The biggest bright spot Saturday night was receiver Jamarye Joiner, who had the best game of his burgeoning UA career.

The redshirt freshman from Cienega High notched personal bests with seven catches, 140 yards and two touchdowns. The converted quarterback finished his first season as a wideout with team highs in receiving yards (552) and touchdowns (five).

Joiner changed positions this past offseason after talking to Sumlin and offensive coordinator Noel Mazzone. Joiner wanted to make a bigger contribution to the team. Receiver offered a clearer path than quarterback.

During the week, the Wildcats weren’t sure what their offensive line would look like for the ASU game. Several players were trying to come back from injuries.

Both players started and played the whole game.

“I thought there were a couple times when Josh wasn’t going to get up. He just kept playing. Our team has a tremendous amount of respect for them as people. You can see it in their eyes during the week and during the game. They have a huge impact on this team.”

• Second-year linebacker Day Day Coleman announced Sunday that he’s entering the NCAA transfer portal. Coleman, who came to Arizona from Mesquite, Texas, as a safety, primarily played special teams this season. He recorded 10 tackles. Coleman will have three years of eligibility at his new school.

• Sumlin on whether the ASU loss stings more than others: “You can feel it when you walk in the stadium. All losses are not the same. A lot of these guys know each other, coaches and players, fans. The thing about this one is, there’s not another game. This is one you live with for the whole offseason.”

• Senior DB Jace Whittaker on the future of the program under Sumlin: “I think he’s leading them in a positive direction. That’s his goal. And I think he’s a man of his word.”

Rams roll up 549 total yards in trouncing Cardinals in Glendale

Paul Cunningham, who was reelected to the City Council from the northeast-side’s Ward 2, addresses the crowd during the city’s inauguration ev…

The Star's exclusive, in-depth analysis of the Cats' season-ending setback against the Sun Devils.

Christmas is coming early for those planning on making the road trip to Waco, Texas when the No. 12 Arizona Wildcats battle No. 18 Baylor on S…

Whittaker is the first UA player to receive an invite to one of the all-star showcases in 2020.

The heady former Arizona cornerback is ready to face and embrace the challenge of making it to the NFL.

Watch: Khalil Tate looks back on his career day, Arizona’s win over Colorado

Watch: Khalil Tate looks back on his career day, Arizona’s win over Colorado

Wide receiver Cedric Peterson, right, and the Wildcats finished the year 4-8 after a 4-1 start.