PHOENIX — Deandre Ayton is more than willing to continue sacrificing his offensive game for the betterment of the team, especially if it leads to returning to the Finals and finishing what the Phoenix Suns started last summer.

However, if the Suns aren’t playing at the level that made them the NBA’s surprise team last season, Ayton sounds more than ready to takeover.

Ayton talked about taking over as a rookie during a horrendous franchise record 17-game losing skid, but he’s now three years removed from that 18-year-old from the Bahamas who became the top overall pick in the 2018 draft after his one-and-done season at Arizona.

Since then, Ayton has experienced the lowest of lows (suspended 25 games for testing positive for a diuretic in the 2019-20 season) and highest of highs (becoming a father) and last summer, he put the league on notice in his first career postseason run.

So, what’s next for the just recently turned 23-year-old?

The Arizona Republic sat down with Ayton to discuss his offseason, fatherhood, the playoffs, anticipated rookie contract extension, this upcoming season and having arguably the best play in the postseason.

ESPN reported last week contract talks have stalled as the Suns are reluctant to offer Ayton a five-year max extension of $172.5 million that could rise up to $207 million. Ayton told The Republic, he’s “expecting something to get done.”

When you went home to the Bahamas, it looked like a celebration. Did you expect that?

A: “Not really. I’m really not that type of guy to celebrate, especially after I lost. It was my birthday when I flew in. They definitely surprised me so I truly appreciate it. They had the whole Junkanoo out there playing our traditional music that I grew up on. It was a warm feeling. Glad my son was with me to experience that. He may not remember it. Just embracing that, man.”

A: “It’s the highest responsibility ever. I think I have the highest responsibility when it comes to him. As a dad and him being named after me means so much. I put away a lot of bad habits, a lot of stuff I used to do, I stopped doing because of him. Bad games don’t phase me anymore because I’m going home to my son. Especially the Finals, the playoffs, not having the games I wanted and coming back home. I already left that game at the door. I’m cussing myself out. I’m watching film with my boys on the way home so we don’t have to do none of this at the house. ‘I should’ve done this, I should’ve done that. Man, that’s not a foul.’ I definitely learned that. I’m truly focused on this little guy right here.”

Leave it at the door?

A: “Sometimes it slips. I catch myself sneaking and watching another game and I’m going through the same emotions, but it’s like, I already left this. It’s on to the next one. What’s the next right step. Just being that dad and seeing him every day. Waking up every morning, that’s just my motivation, literally. He doesn’t even know what he’s doing for me. I can’t even explain it to be honest.”

The Suns were 10-4 in the playoffs when you posted a double-double. Did you realize after the Finals you had that much of impact in the postseason?

A: “I didn’t pay attention to any of that. I didn’t know anything about that. I’m trying to get this dub. This is closest I’ve ever gotten. I’m not going to change s—t. I’m not going to change nothing. I’m going to do what we have to do. Sacrifice, and if it don’t work, it’s DA time. Show them how I want to win games now, but other than that, I trust my teammates and I trust my coaches and we made it to the finals with it. Why change now?” We were winning games and we were winning together.”

You averaged 10 shot attempts a game, but shot 62.6% from the field. Do you see more FGAs for you this year?

A: “Most definitely. If I can’t see it, someone else is going to see it because that is a must. Giving me the ball is a must. Feeding me is a must. Say I shoot 70% in this league. I might shoot 70%. In the end, it’s about I’m holding my end of the bargain. Consistency, every night. I’m so hard on myself, I’m just happy that I finally got to show my ability to cover the big man position in this league.

“Now I can do what the hell I want. You can’t tell me s—t. You can’t tell me how to play this game because I’ve already done it, and now I’m going to do what I want. Everybody else is getting their praises when they do what they want to do. I just did it the hard way. I had to show y’all. I was it, but y’all still wanted me to show y’all because y’all thought I wasn’t it. Now that I’ve proven myself as a big man, that I hate being, I’m going to show you why I am and who I am. I’ve put in so much work behind that.”

Speak to your battle with Giannis (Antetokounmpo) in the Finals, the good, the fouls?

“I might have gotten knocked out, but I was throwing these (swinging his fists out). I was still fighting in my sleep. The last blow, I was about to throw something. I went down fighting. I can’t really say what I should’ve done. I did everything. Everything they wanted me to do and more. Control what I can control and that’s what I did and that goes for my teammates as well. We just have to go cover that. Whatever that is, we’ve got to go find that.”

You said the city is going to be lit this season?

A: “We’re the No. 1 team in the West. That sounds fake. The Suns are the No. 1 team in the West. That’s not what the typical person is saying right now even though we were just in the Finals. Taking away from our credit of what we just did and that’s why it’s even more egregious like we didn’t do nada. Felt like we didn’t do nothing because everybody was saying it was a fluke. Even with Giannis. He deserved that. That man deserved that. I watched that dude work for that. I watched that dude get kicked out of playoffs.

“I watched him. Played against him. He worked for that. That man wanted it. Played with one leg. You can’t take away from people’s success and that’s what people are trying to do with us. They think it’s a fluke. All that blood and sweat and tears and the sacrifices our team made and you’re trying to say it was a fluke. It’s personal now. I’m coming back for blood. I have so much vengeance coming into this league. I am not happy coming into this league. I’m fed up. That’s just my energy right now.”

Two last things. In the offseason, I’m looking at Luka (Doncic), Trae (Young) get max extensions. Shai (Gilgeous-Alexander). When is Ayton going to get one? (Teams have until Oct. 18 to sign first rounders from the 2018 class to rookie contract extensions).

Last thing. I’m watching the NBA counting down the top 100 plays of the season and the lob, was second on the list. (Ayton’s lob finish of Jae Crowder’s baseline inbounds pass with 0.7 seconds left to give the Suns a 104-103 thriller over the Los Angeles Clippers in taking a 2-0 series lead in the conference finals ranked second on the list.)

A: “No. 1. No. 1. It should’ve been No. 1, but I have to get what the world gives me. So, for them to even throw me in there? You’re starting to see it. The fact that my name is caught up with all those big plays, even with the block with Giannis (on Ayton in the Finals ranked third), I was still in that play. I’m everywhere. I just love competing.”

Jrue Holiday’s steal on Devin Booker and eventual lob pass to Antetokounmpo for a dunk with 13.5 seconds left in Game 5 of the finals the Bucks won in taking a 3-2 finals lead was ranked the top play of the 2020-21 season.

“I don’t think we’ll ever see a play like that again. Our best player (Booker) setting a screen to get me open. And Chris (Paul) wasn’t out there. All my friends were like, ‘They got to have you up there.’ Nah. I told them I’m grateful. The world is starting to see me. I was just suspended last year. I was at the bottom. The next year, I’m in the finals. That’s how you shut somebody up. Period. That’s how you do it. I’m not looking back. Anything the world give me, I appreciate y’all, shake y’all hand, but it’s back to work. I’m going to do it again. I want to see it again.”

• What: Season opener: Nuggets at Suns 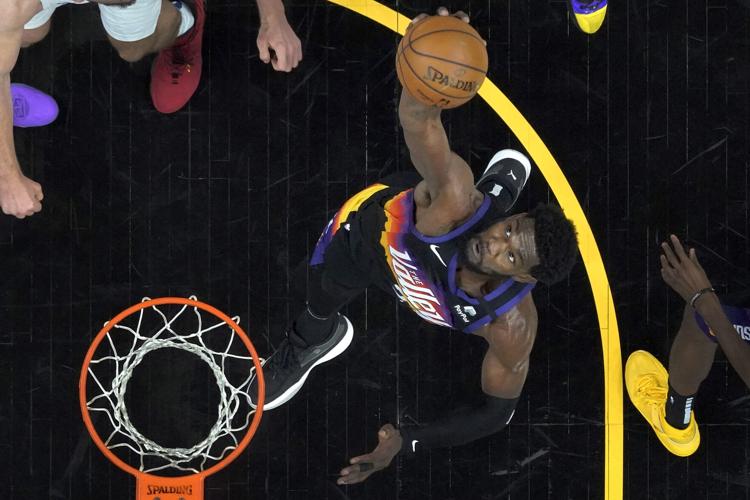 Last season, Suns center and former Arizona Wildcat Deandre Ayton became the first player in the shot-clock era — which started in the 1954-55 season — to shoot better than 70% in a 12-game span during the postseason, according to ESPN Stats and Info. 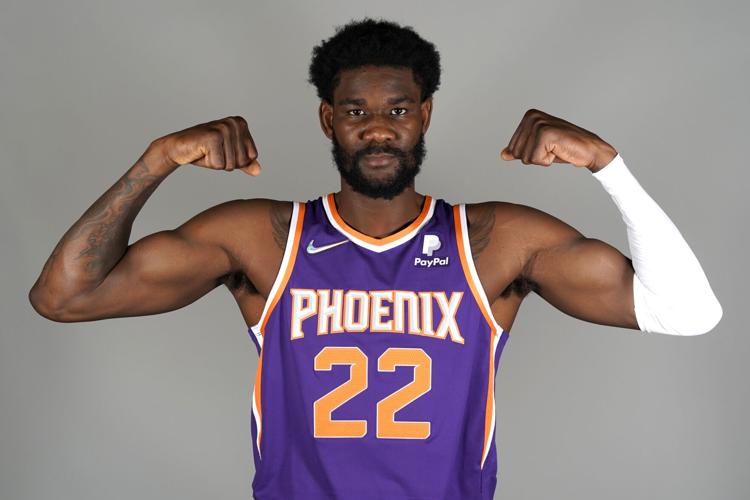 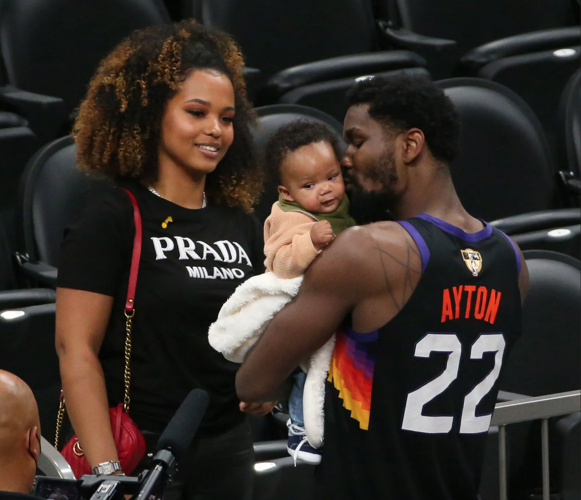