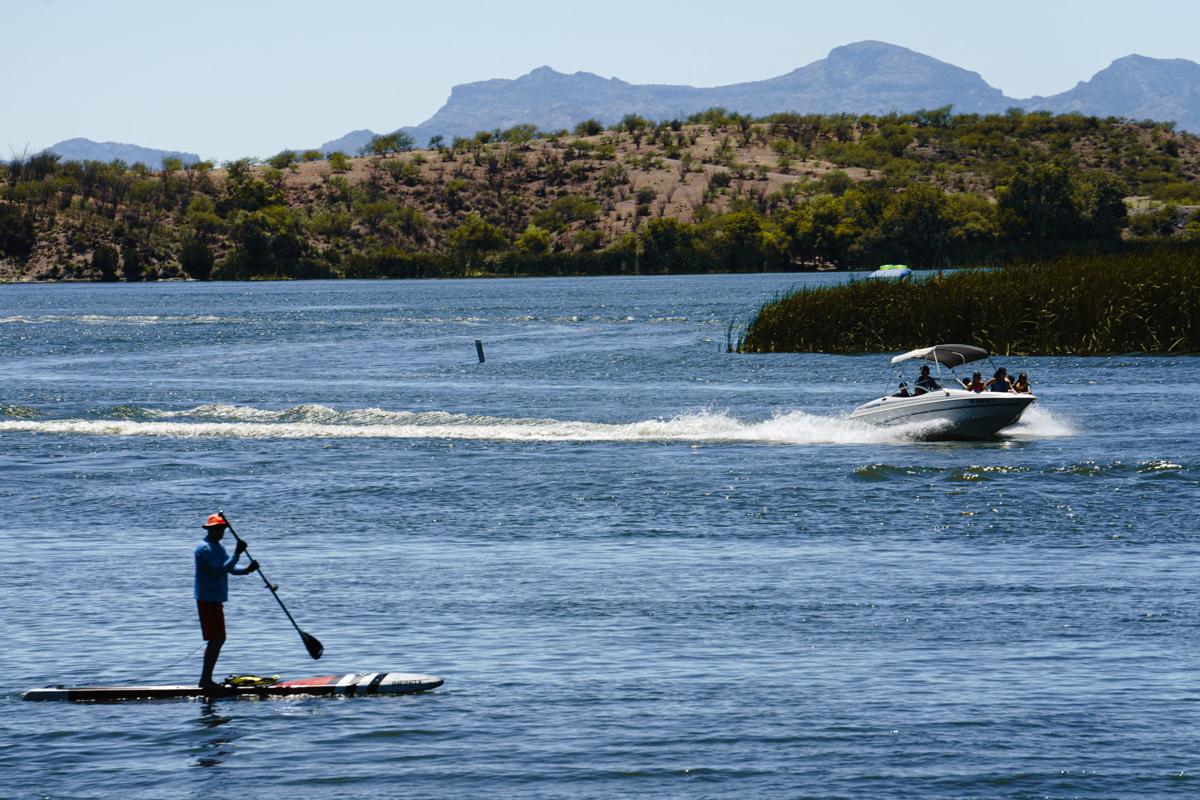 Patagonia Lake State Park is a refreshing getaway from the dry landscape of Southern Arizona. 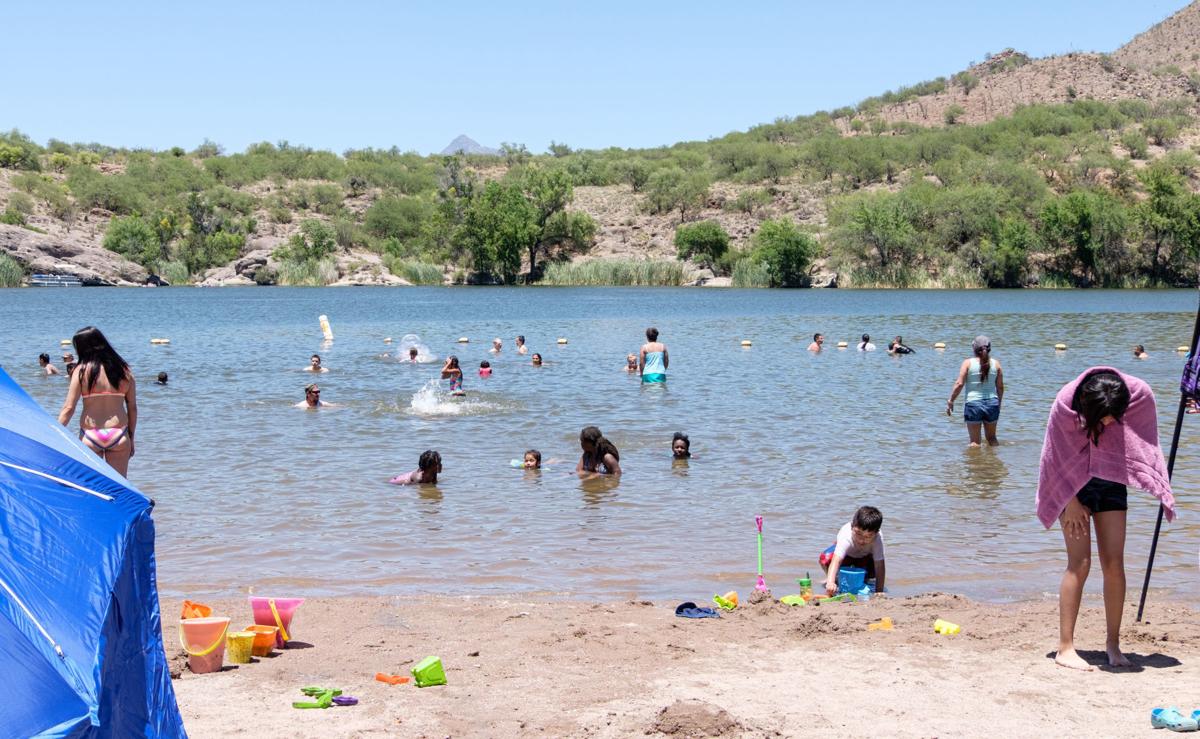 The man-made, 265-acre Patagonia Lake offers a beach where you can listen to the sounds of tiny wakes slapping the sand, with campgrounds on the southern end. 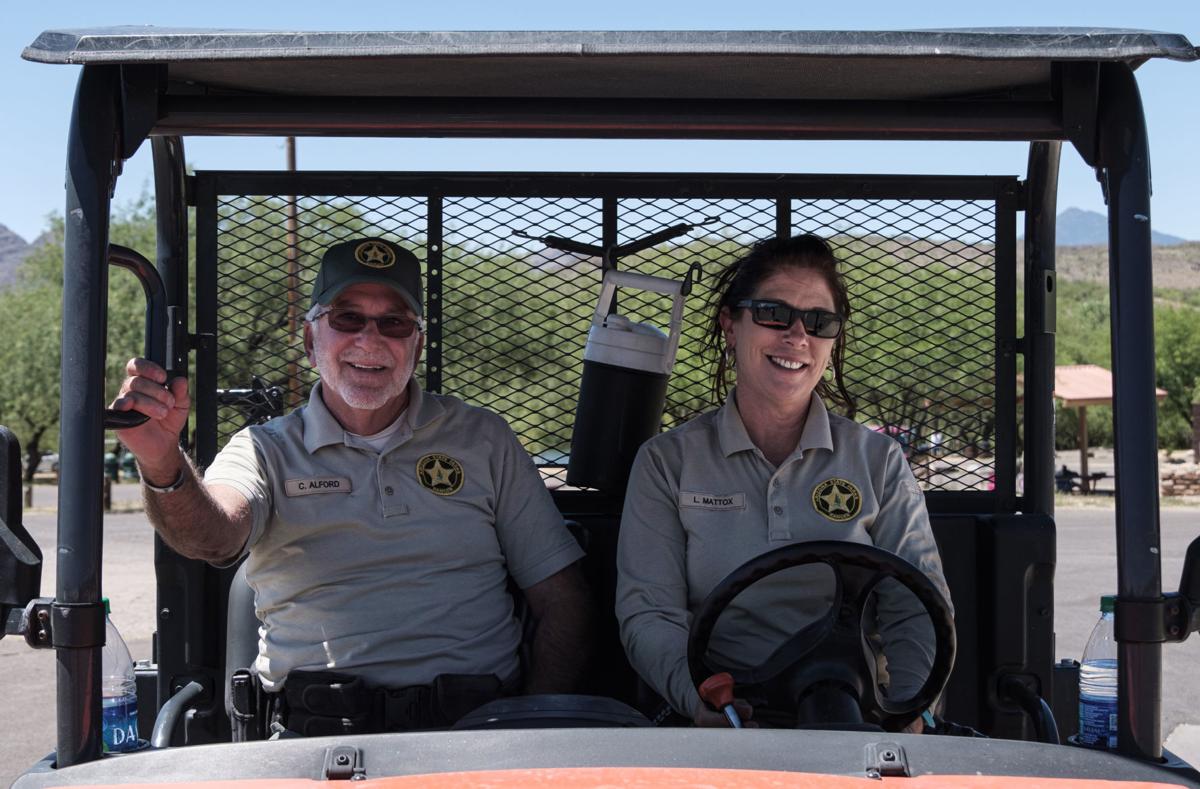 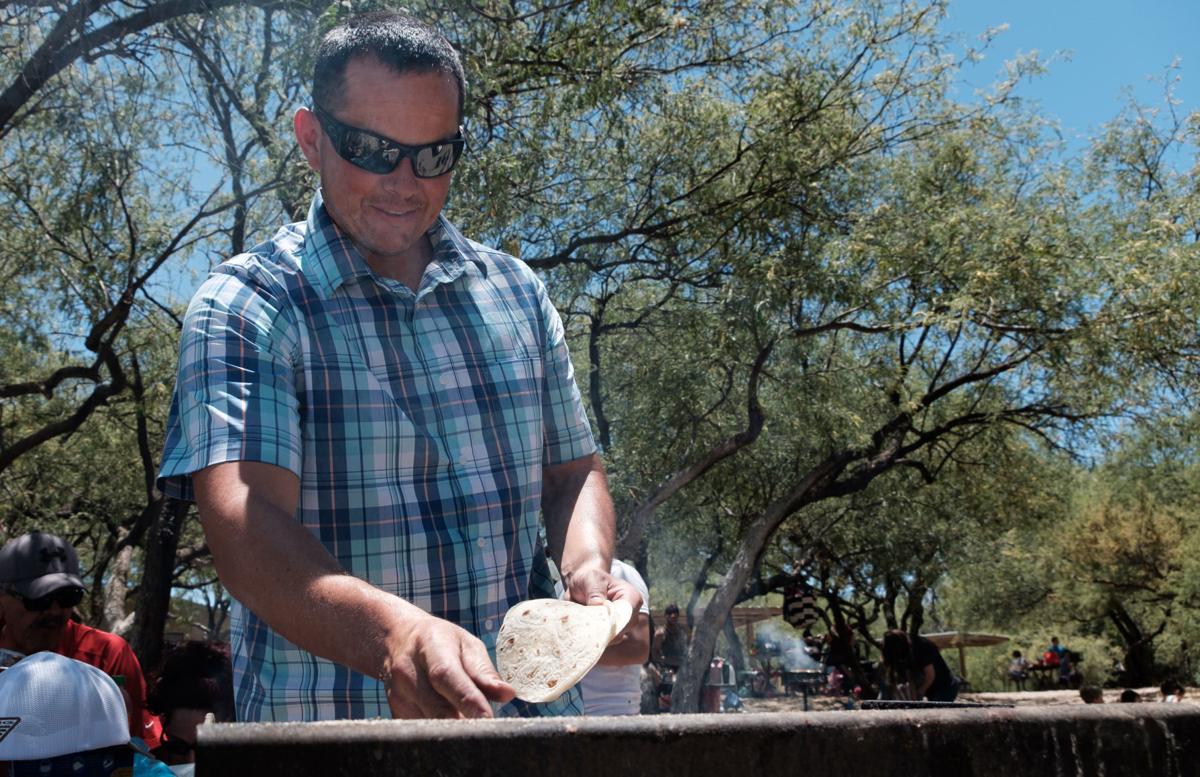 Fabian Romo puts tortillas for carne asada tacos on the grill on June 23rd, 2019 at the Patagonia Lake State Park. Romo said his family likes to leave the city limits and choose Patagonia so that they can grill, boat, and fish.

By Mark Lawson Special to the Arizona Daily Star

On Patagonia Lake weekends, Fabian Romo likes to get up before the sun and load the car before he wakes his two young kids.

With his wife and parents in tow, Romo and his family make monthly treks to the lake, an hour drive from their home in Sierra Vista.

Once they hit that winding, two-lane highway leading into the countryside, Romo feels like he’s entered a different world.

“We come pretty often and do a little bit of everything,” he said on a Sunday earlier this month as the tantalizing aroma of carne asada cooking on a beachfront grill perfumed the air.

Patagonia, a man-made lake created in the late 1960s, is 90 minutes from Tucson and once you arrive, you find yourself in a watery oasis that offers something for just about everyone, from boating and swimming to cookouts and picnics in the park.

You can rent a boat and cast a line in the 2.5-mile-long lake or challenge the waves on waterskis. If you’re not into the water, the park has places for hiking and camping and ideal lookouts for bird-watching.

Romo and his family spend their time bass-fishing and boating, but a highlight of the trip often starts at the grill.

“Whoever gets the tongs first handles the grilling,” Romo said that early July Sunday, as family members sat at the table behind him preparing salsa and tortillas for the afternoon feast.

Alex Zamora doesn’t get out to Patagonia as often as Romo, but every few years she reunites with friends Kady Alexander, Bella Saracino and Gabby Montes.

“We used to come as kids all the time,” Zamora said as the group of teenage friends who grew up together in Sierra Vista inflated a raft. “We try to meet up every year but weren’t able to last year. It’s exciting to come out here because we don’t get to see each other a lot and are each growing up doing different things.”

Patagonia Lake State Park manager Colt Alford has seen a number of kids over his 19-year tenure pass through the park, some of them coming through the junior ranger workshops he leads.

“It’s rewarding when the kids come up and being able to teach them about animals and how the park has changed over time,” he said, taking a break from patrolling the park with his assistant Laura Mattox.

Summertime at Patagonia Lake is all about the water, but in the winter months, it’s all about the birds. Nearly 200 species congregate around the lake, attracting bird-watchers from all over the world.

Patagonia Lake became a state park on April 1, 1975, offering a respite from Southern Arizona’s brutal heat during the summer months — temperatures rarely top 100, sticking to the low- to mid-90s — and a change of scenery in the fall and winter months.

Last year, the park built cabins a stone’s throw from the water to attract more visitors. Each cabin rents for $119 a night and sleeps six.

Mark Lawson is a University of Arizona journalism student apprenticing at the Arizona Daily Star.

While Patagonia might be the closest, there are a few lakes a short drive from Tucson:

• Parker Canyon Lake — Ninety minutes southwest of Sierra Vista in the Huachuca Mountains and about 5 miles north of the border with Mexico, the temperatures usually drop about 20 degrees from Tucson. Lake offers camping, boating, fishing, swiming and hiking. parkercanyonlake.com

• Peña Blanca — Nestled in the Coronado National Forest, 18 miles northwest of Nogales, this lake has a reputation for fine fishing. The manmade lake was completely drained a decade ago amid complains of mercury in the water. visitarizona.com

• Roosevelt Lake — This is a bit of a hike, more than three hours drive, but the Roosevelt is the state's largest lake and has a unique floating hotel on the lake that can accommodate six to eight people. Details at rlmaz.com

Bad Decisions on the move

Sonoita's Arizona Hops & Vines vineyards is moving its popular Bad Decisions campout to Patagonia Lake Aug. 9-11. Campsites are sold out, but more have been added at nearby Santa Cruz County Fair & Rodeo Fairgrounds, 3142 S. Highway 83 in Sonoita. They're calling it “Sonoita by Storm” and campers can catch a shuttle bus from the fairgrounds to the lake.

Most people want to keep old files on their devices

Most people want to keep old files on their devices

If you're crossing your fingers for thunderstorms today, the best chances are east and south of the Old Pueblo.

Tucson police have identified the bicyclist killed after being hit by a car on Wednesday.

Tucson's margarita championship is right around the corner

The World Margarita Championship is (almost) back in Tucson for its 14th year.

Patagonia Lake State Park is a refreshing getaway from the dry landscape of Southern Arizona. 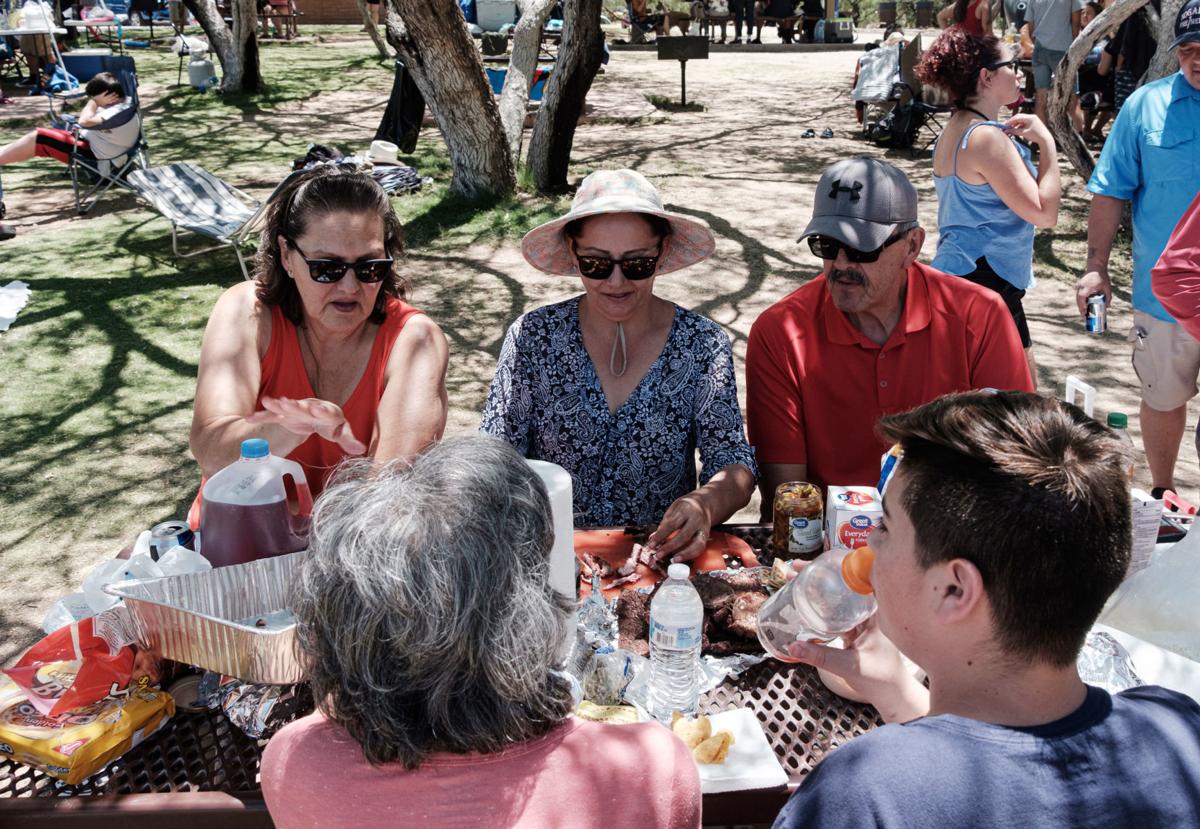 The Romo family spend most of its time bass-fishing and boating, but a highlight of the trip often starts at the grill. On this July day they were preparing carne asada tacos around a picnic table.

The man-made, 265-acre Patagonia Lake offers a beach where you can listen to the sounds of tiny wakes slapping the sand, with campgrounds on the southern end. 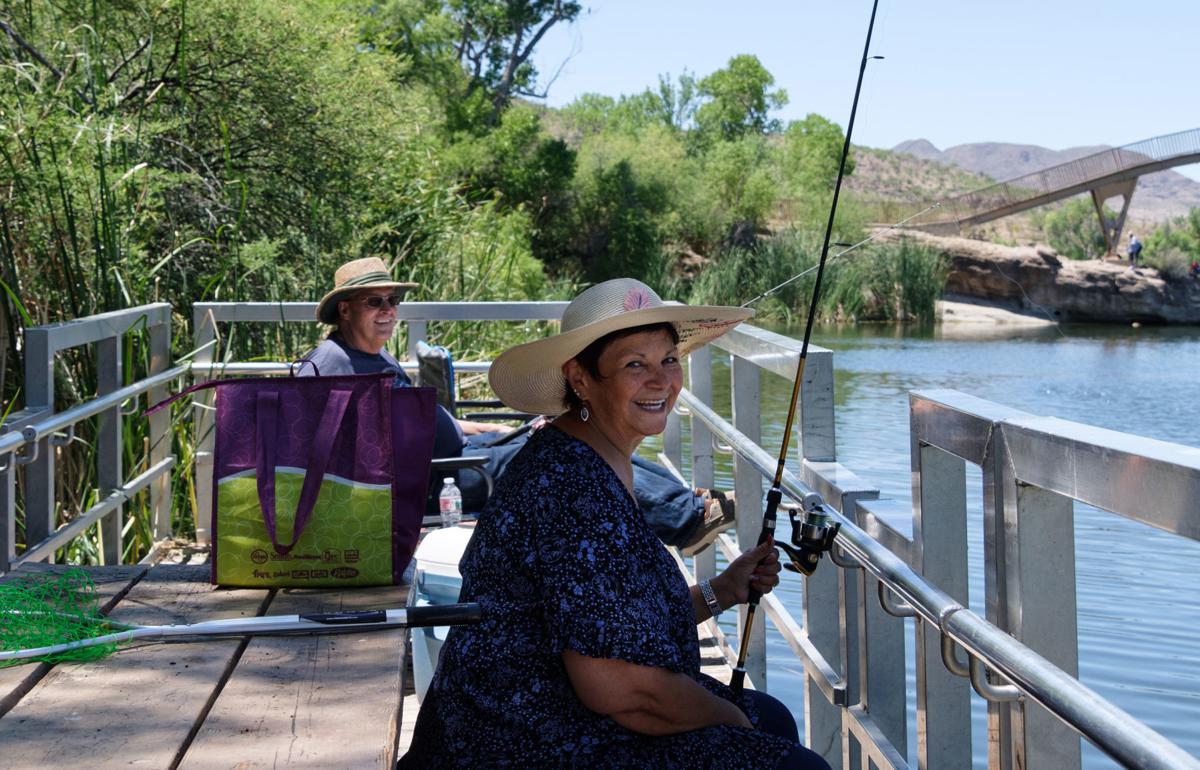 Randy and Alice Ratliff came to Patagonia Lake State Park to test the fishing before their son, Lincoln, visits them later this summer. 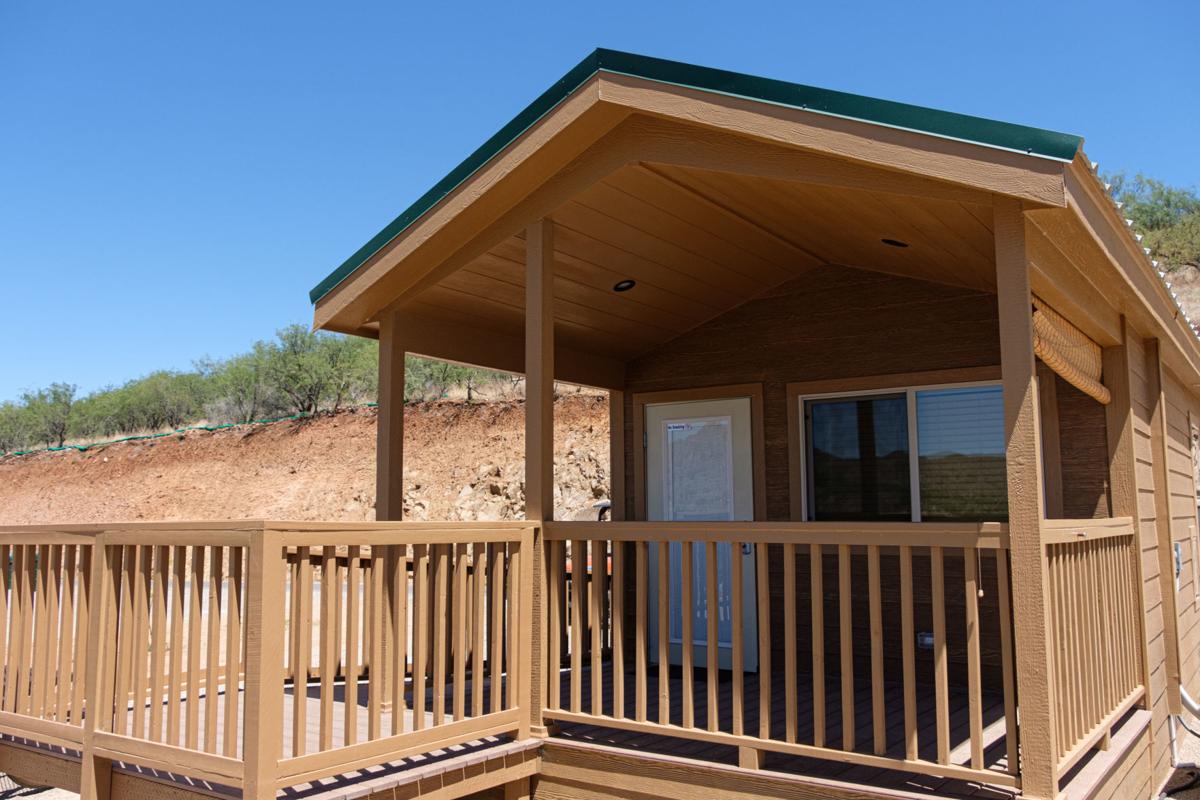 Patagonia Lake also offers cabins for visitors that start at $119 a night and sleep six people. 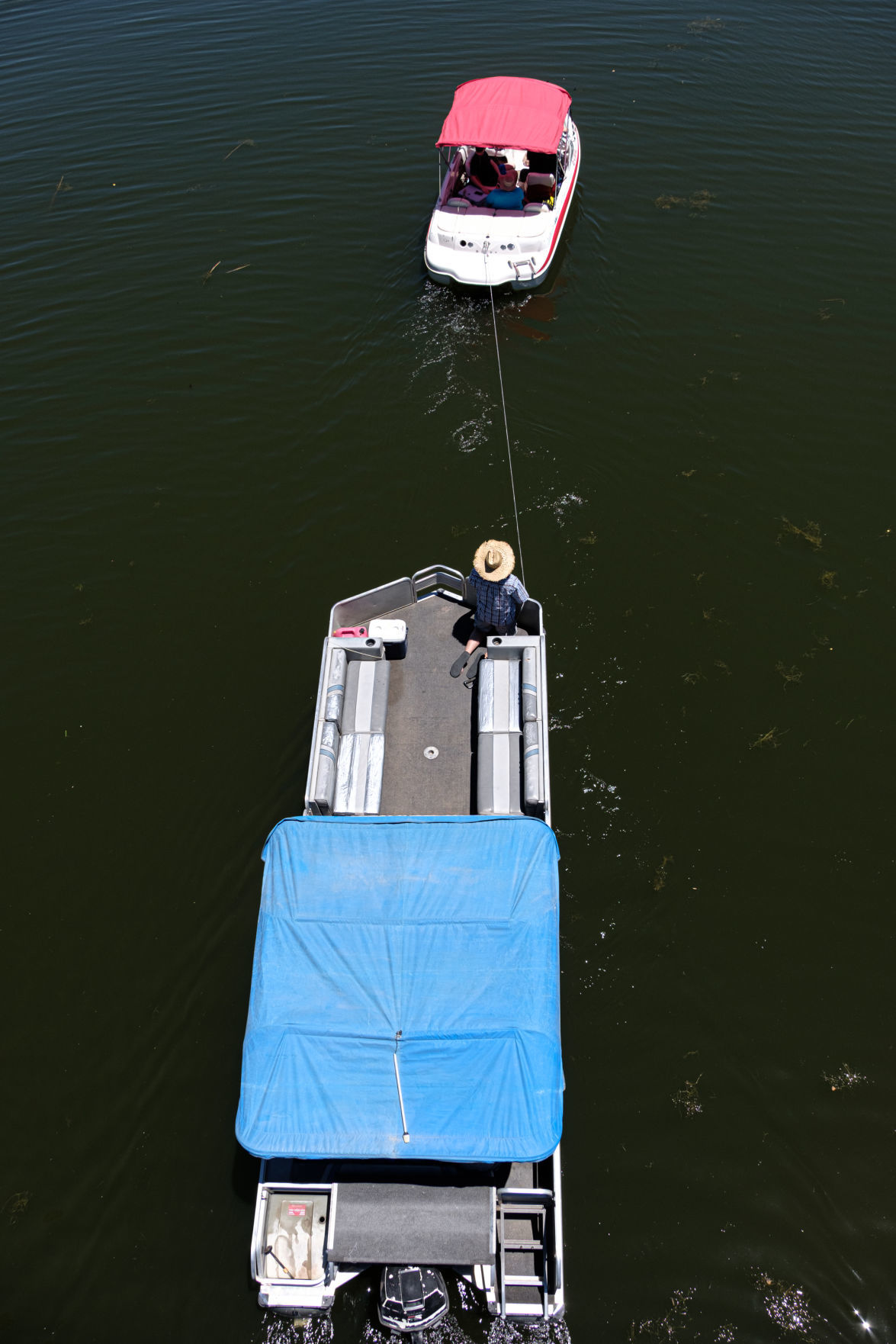 A boat gets tugged into the marina. The summer months are a good time for landing largemouth bass. 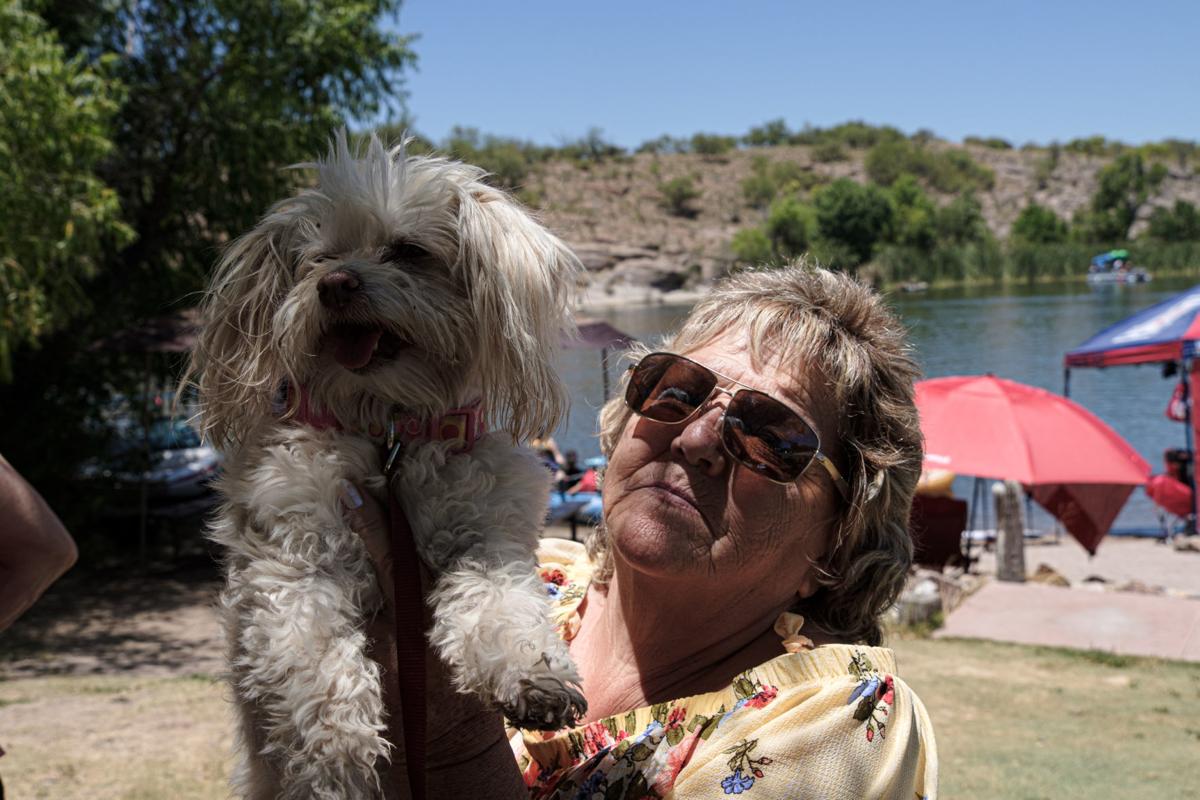 Martha Romo and her dog on June 23rd at Patagonia State Park. Romo and her family escaped the heat for a weekend to have tacos and a couple drinks by the lakefront.

Visitors to Patagonia Lake State Park find shade under a ramada. Boat rentals are available, and the park has over 100 developed campsites.

Fabian Romo puts tortillas for carne asada tacos on the grill on June 23rd, 2019 at the Patagonia Lake State Park. Romo said his family likes to leave the city limits and choose Patagonia so that they can grill, boat, and fish.