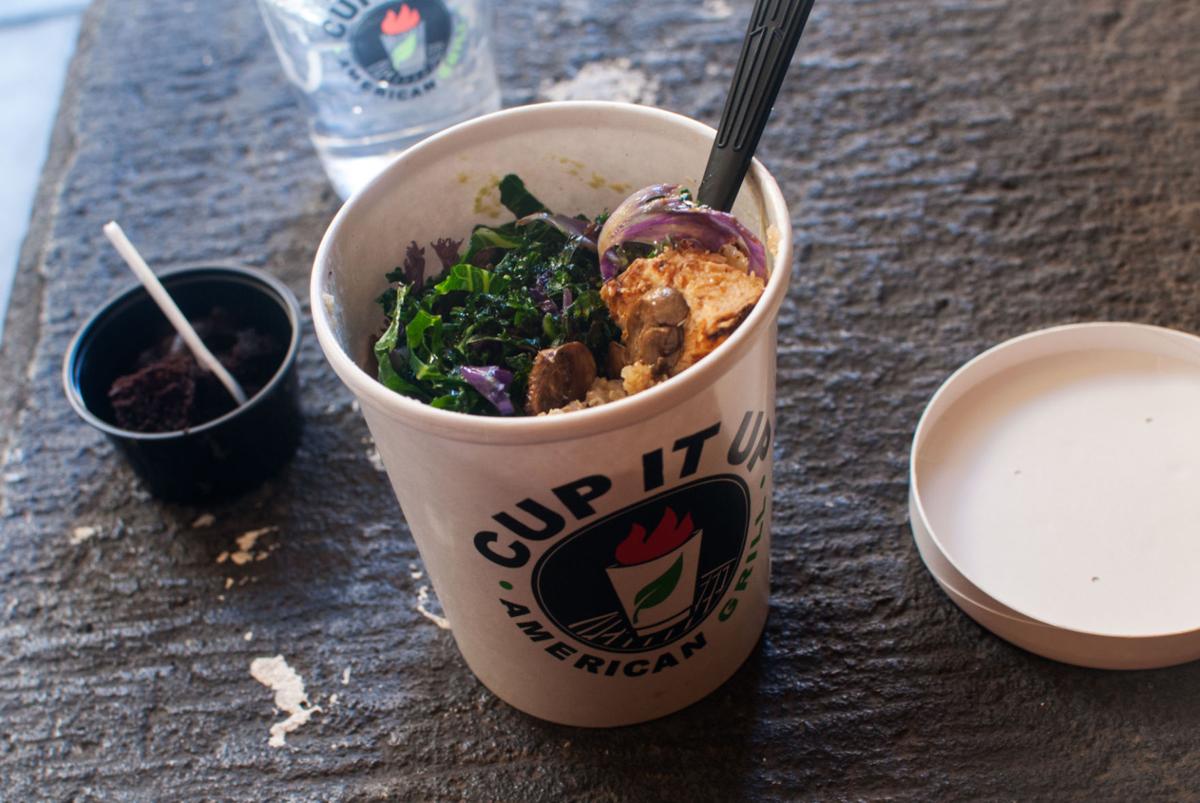 Cup It Up American Grill offers a new twist to eating on the run: Put it all in a cup. 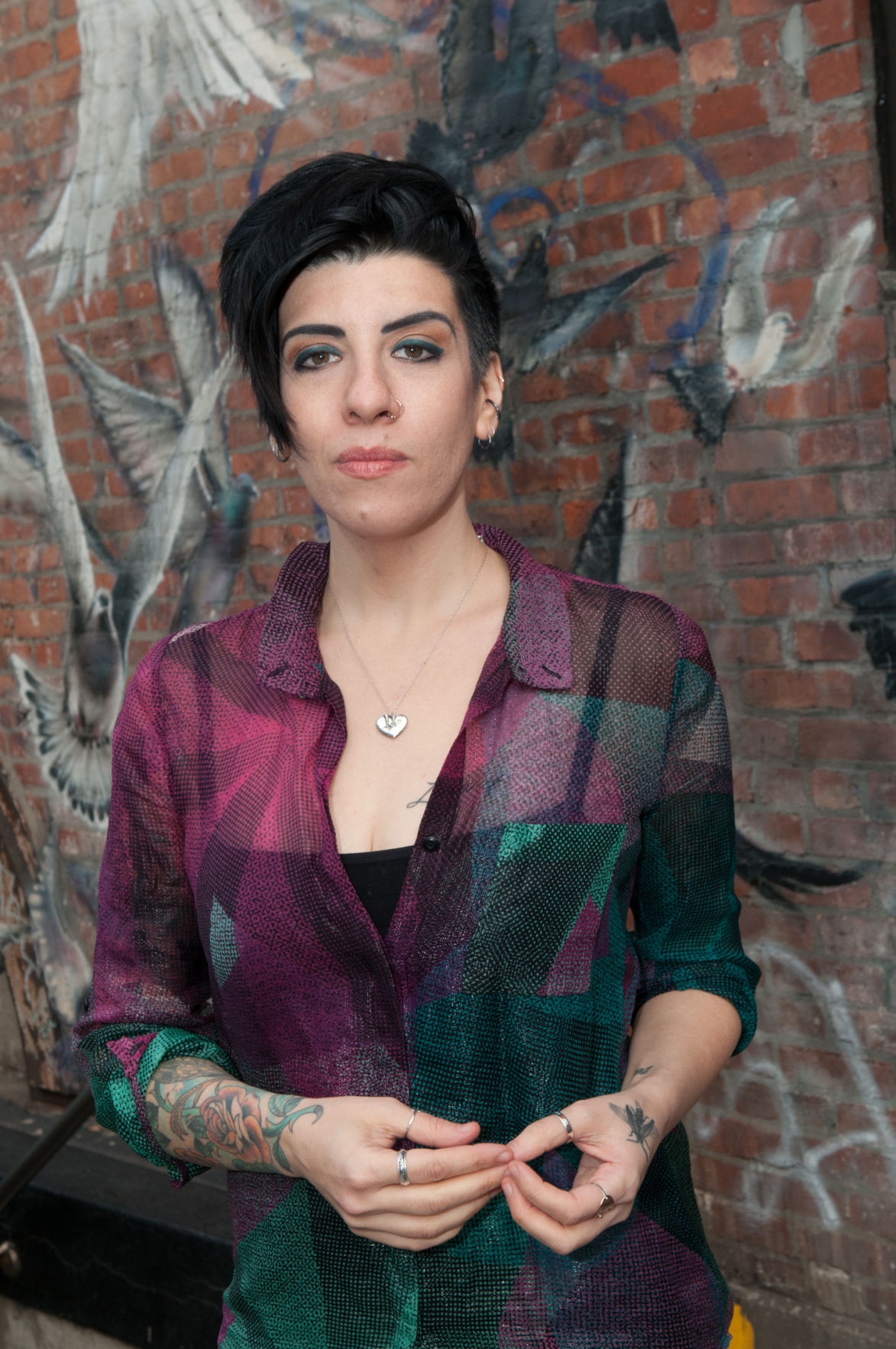 to-go order in a cup

A new Tucson restaurant is redefining eating on the go.

Cup It Up American Grill at 1101 N. Wilmot Road near East Speedway serves its multilayered meals in a 32-ounce cup.

The restaurant, which opened Jan. 13, follows the Subway/Chipotle assembly line model where your meal is built in stages, from protein to sauce.

There are four steps starting with the entree — three types of grilled chicken, grilled shrimp, slow pulled pork and short ribs — from $7.95 to $9.95.

Step 2 is the “base” — choose from brown or white rice, barley or quinoa — and chilled or grilled kale, romaine or spinach.

“Most people go with the grilled greens,” noted Julian Alarcon, the chef/co-owner who created Cup It Up’s menu.

Step three is the toppings, including onions, peppers and other veggies, that can be grilled or chilled, as well.

The final step is dubbed “superfoods” — things like avocado, pine nuts, chia seeds and other foods known for their high nutrient values.

You can then choose to top it all off with sauces including the house favorite zesty signature sauce or the savory peppercorn.

Lest you think this is just a healthful-food restaurant, Alarcon is quick to note the mac and cheese ($3.95 and $6.95) is quickly becoming a favorite for kids and their parents.

Cup It Up is the brainchild of Tucson golf buddies Christopher Smith and Jay Warren, who often asked that their food be put in a cup when they were on the course. They brought in Alarcon, a veteran chef who has worked with Fox Restaurant Concepts, golf courses and at area resorts, in summer 2014 to develop a menu and bring their idea to life.

In addition to its entrees, Cup It Up American Grill serves salads ($7) including its California avocado salad with roasted pistachio nuts, kale, avocados and grape tomatoes, served in a bowl.

And if you’re a little hesitant about getting your meal in a cup, you can ask for a box, Alarcon said.

Alarcon said the Wilmot Road location, next door to a Trader Joe’s market, is the first of several they plan to open.

They’re looking at locations next to Whole Foods on Ina and Oracle roads and another at Tucson Premium Outlets.

The partners also are in talks to become a vendor at Arizona Stadium on the University of Arizona campus this fall, he said.

“We really designed this whole deal to do at high-volume spaces” such as sports stadiums or malls, he said.

It is open from 11 a.m. to 7 p.m. Mondays through Saturdays; closed Sundays. Details: facebook.com/Cup ItUpAmericanGrill

You can join beginning Wednesday, Feb. 17, for $15 a month or $95 annually to become a club Winophile, which gives you access to member pricing on a monthly list of 30 wines selected by Ermanos sommelier Anya Linda and all Ermanos in-house wines. For $35 a month, $295 annually, you can be a Cellar Dweller, which includes a monthly blind date pack— two wines of Linda’s choosing.

Linda will curate the club, and Ermanos’ owner Mark Erman will run the club, which will be located inside Ermanos at 220 N. Fourth Ave. Details: tucwineclub.com

Our Hen House founder Jasmin Singer is bringing her memoir to Tucson for a free Vegan Logic event Saturday, March 5, at the Loft Cinema, 3233 E. Speedway.

Singer, who co-founded the New York-based animal advocacy organization with her spouse Mariann Sullivan, will read from her book “Always Too Much and Never Enough: A Memoir” and answer questions about Hen House and its mission.

Our Hen House — ourhenhouse.org — produces resources people can use to help create change for animals.

Is America's best burrito in Yuma?

If you're driving to San Diego, you have to stop at this restaurant ... Video by Andi Berlin, Nick Murray and Samantha Munsey.

Cup It Up American Grill offers a new twist to eating on the run: Put it all in a cup.