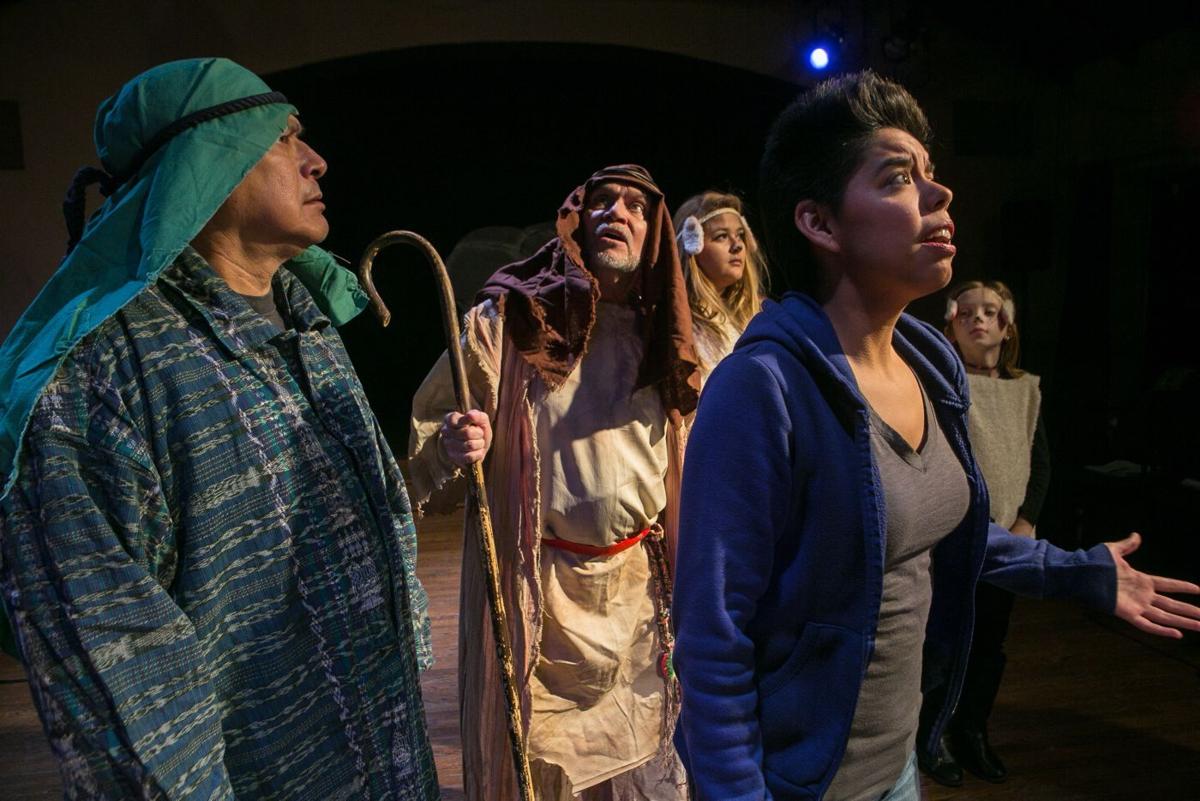 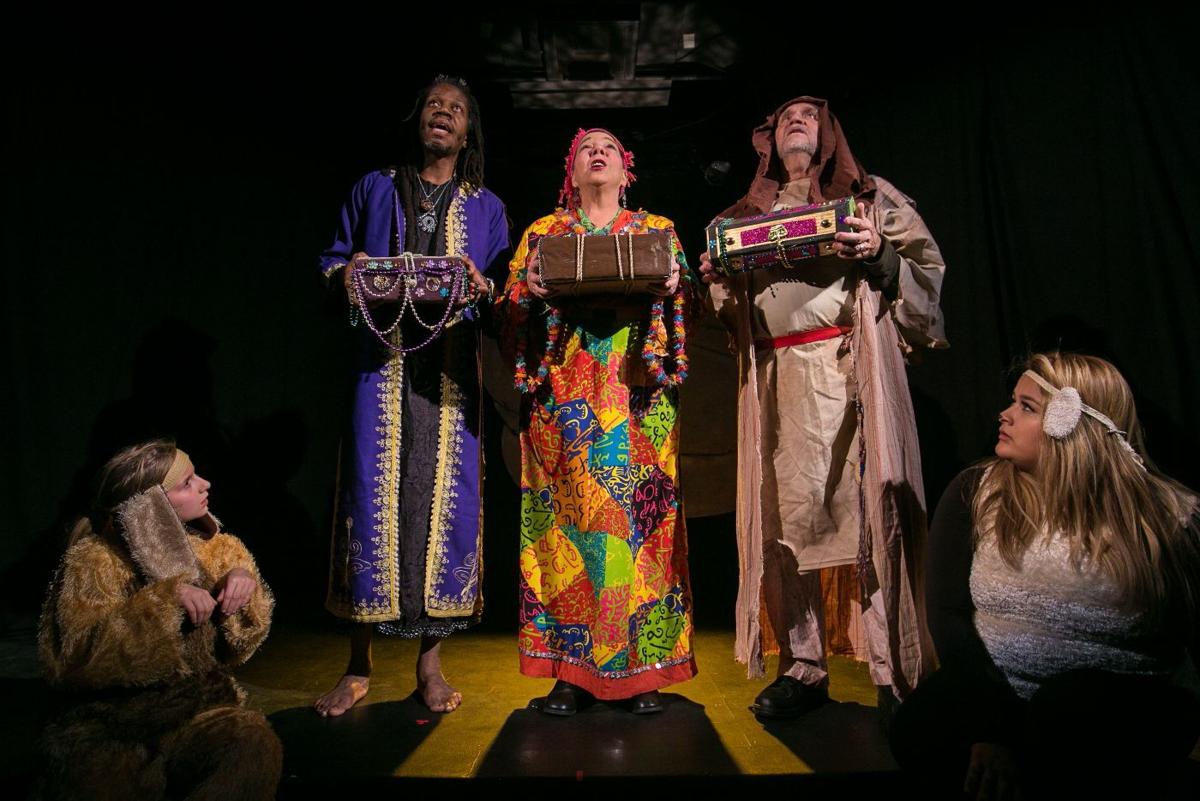 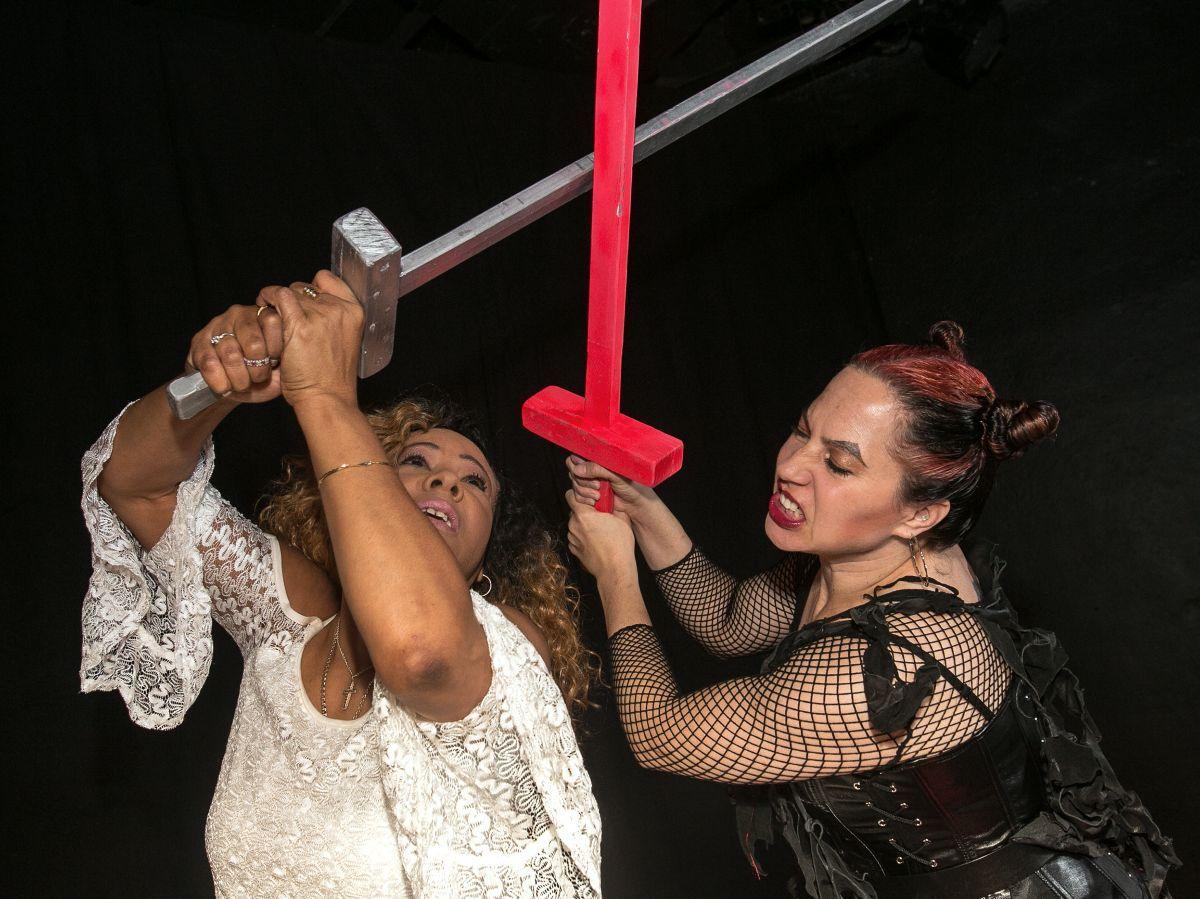 Michael the Archangel (P. J. Peavy), left, battles with Lucifer (Alida Gunn), right, during rehearsal for the Borderlands Theater production of Pastorela at the Temple of Music and Art in Tucson, AZ. 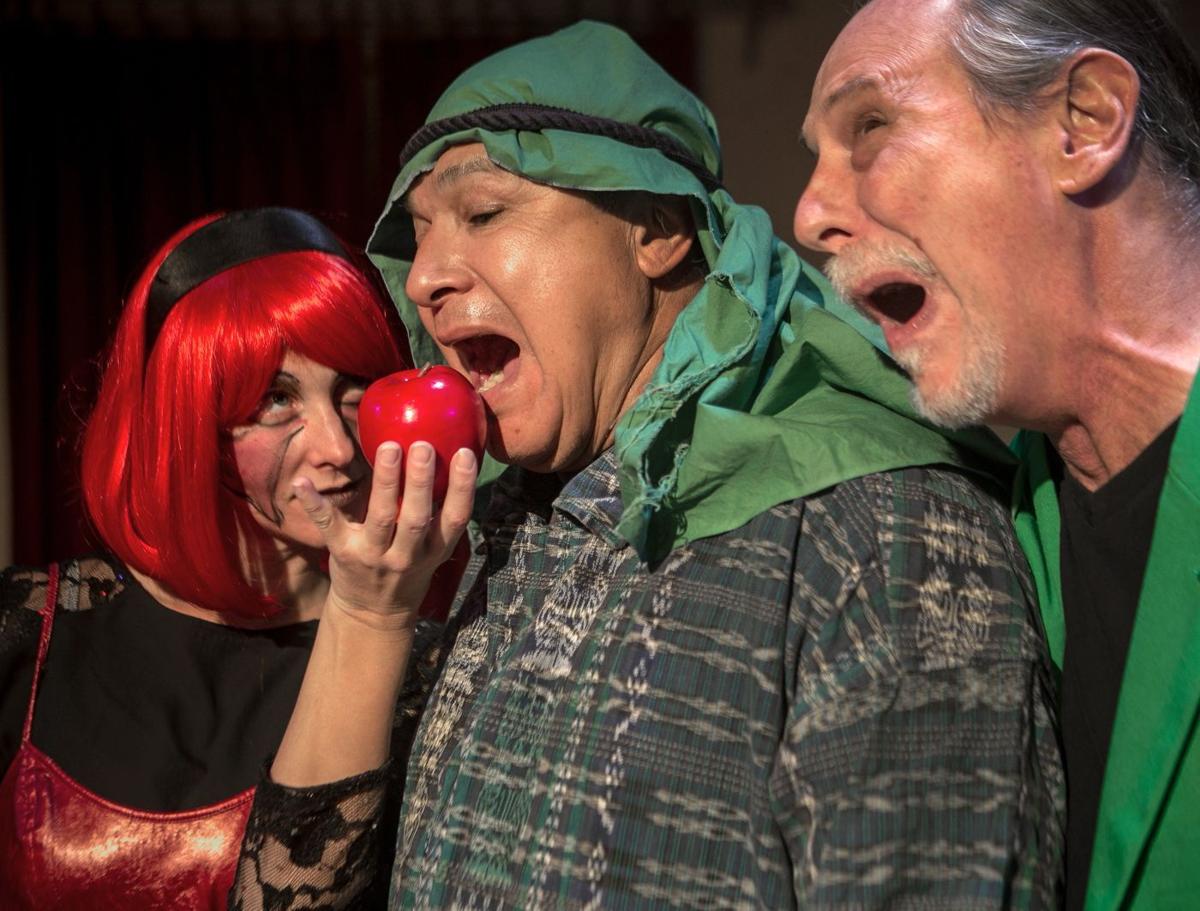 Satan (Emily Pratt) tempts Bato (Robert Ybanez) as Envy (Jim Klinginfus) watches during rehearsal for the Borderlands Theater production of the pastorela at the Temple of Music and Art in Tucson.

Doug Ducey and Carly Fiorina will be in Tucson this weekend.

So will Celine Dion, the evil witch from Snow White and Donald Trump.

They are all among the angels and the devils in Borderland Theater’s “A Tucson Pastorela.”

The play is back for its 19th season after a hiatus last year due to a new producing director and smaller budget.

“People just kept asking for it,” says Milta Ortiz, who is behind the script, which is rewritten every year to reflect topical issues.

“There was a committee on Facebook about bringing back the Tucson pastorela. We do socially relevant plays, and this one is a lot more fun than some of the plays we’ve done in the past. Some people look forward to it.”

This year the cast and venue are smaller, but the format is the same — the shepherds’ journey to see the baby Jesus. It is filled with Christmas carols, satire, and modern pop songs sung in English and Spanish.

If you find Ortiz rhyming while she’s speaking, it’s understandable: Pastorelas are traditionally written in verse.

Ortiz spent three weeks in October researching and writing the script, an online rhyming dictionary as her companion.

“The lines reveal themselves,” Ortiz says. “You get into this state of mind where all of a sudden you’re talking and still rhyming and your mind just goes there and its hard to turn it off. It’s really playful.”

The family-friendly script is a crazy mashup of this year’s events on local and national levels: pop culture references combined with political candidates and Disney throwbacks.

Yet there is a larger message in the pastorela.

“Good eventually overcomes evil,” says, Jim Klingenfus, the musical director. “Evil is always lurking in the background, but evil is essentially weak. We, by our actions or inactions, give evil its power. That’s why we make it comedic … and this is a season of hope.”

Klingenfus started the Facebook page last year as a type of record, posting links to the songs and allowing community members who were a part of the pastorela to gather.

“This is a very distinctive and unique take on a nativity play that speaks with the kind of voice you don’t hear anywhere else,” Klingenfus says. This will be Klingenfus’ 17th Tucson Pastorela production.

“I think the story is beautiful,” says local folklorist Jim Griffith. “The things that change are topical and regional commentary, and that is always very funny and exciting.”

And this: “It’s the hero’s journey, and people innately follow that story,” Ortiz says. “It symbolizes a rebirth and that people can overcome. It’s such a long tradition, and something in it speaks to humanity. People want to be a part of it.”

Callie Kittredge is a University of Arizona journalism student apprenticing at the Star.

Back in Middle Ages' Europe, the Catholic Church decided Mass in Latin wasn’t reaching the flocks.

But the travelling minstrels who sang and told stories in the language of the population sure were.

So the church began to mount short plays with the idea of teaching biblical stories and winning converts. The first pastorelas — the story of the shepherds’ journey to the Christ child —emerged from those shows.

The plays became more and more popular. And further away from the church’s intent — politicians became fodder for the plays (we suspect a few heads rolled — literally — when minstrels mocked the monarchy), and the idea of Christmas as a celebration of giving and receiving gifts did not please the church.

The Catholic Church bowed out. But by that time — the 1500s — the Spainards were off to conquer the New World and they brought the pastrolela tradition with them.

It spread throughout villages and towns in Mexico. To this day, pastorelas unique to each area are still staged throughout the country. Local figures get lampooned and the devil takes on the face of such characters as corrupt politicians, or drug lords or bullying policia — if a public person was unpopular, he or she showed up in a pastorela.

But this is a constant: Though mightily tempted, the shepherds follow the star to Bethlahem to pay homage to the baby Jesus.

In that way, the pastorela follows the hero’s journey, says Marc David Pinate, who directs Borderlands Theater’s “A Tucson Pastorela” with Eva Tessler.

“You keep on going though there are all these temptations and reasons to stop,” he says. “It’s about moving forward and eventually reaching the goal.”

Barclay Goldsmith, Borderlands’ founder, launched the company’s first “A Tucson Pastorela” in 1995. It has been a holiday constant every year but last, when Goldsmith retired and Pinate slipped into the directing producer role. The transition — and a tight budget — kept the play from going on that year.

“It’s a way to celebrate the end of the year and the season, particulary Christmas,” Barclay says about “A Tucson Pastorela.”

It’s also a way to take jabs at local and national figures and events, and to wrap up with a deep sense of hope.

Expect lampooning, lots of humor, and some beautiful Christmas carols — to hear “Silent Night” in Spanish is to believe in the divine.

You'll always find these in a pastorela:

Source: The Hemispheric Institute of Performance and Politics

A few of the Old Pueblo's other holiday traditions that we love:

Carrillo Magnet School's Las Posadas is Dec. 11. Since 1937, students at the elementary school have walked through the Barrio Viejo neighborhood, dressed in costumes and singing traditional songs. The procession is led by a child dressed in the white uniform of a Mexican farmer. Following is a young boy with a clay bowl filled with ashes, which he spreads along to way to keep Mary and Joseph from slipping. They knock on door after door looking for a place for Mary and Joseph. Many turn them away until, finally, they are welcomed. carrillo-tusd1.org or 225-1200.

Tohono Chul Parks Holiday Nights, weekends through Dec. 19. Twinkling lights guide the way down the paths of the desert garden. tohonochulpark.com or 612-0512.

Tucson Botanical Gardens Luminaria Nights, Fridays through Sundays through Dec. 13. The tradition is 29 years old and we never tire of it.

Downtown Tucson Parade of Lights, now 21 years old, fills downtown with parade floats covered in lights. It's Dec. 19 this year. The tree lighting is at 5:45 p.m.; the parade starts at 6. On Facebook.

Winterhaven Festival of Lights celebrates its 66th year. Homeowners go all out to bring the holiday cheer. It's 6-10 p.m. nightly from Dec. 12-26. winterhavenfestival.org

Check this story at tucson.com for a video of an impressive light and water show at last year's Winterhaven Festival.

Running time: 90 minutes without an intermission, followed by a piñata hoisting for the children.

Online: Go to this story on tucson.com to catch a snippet of San Diego Repertory Theatre's 2011 production of "La Pastorela" — a scene of the angels as rock stars.

Michael the Archangel (P. J. Peavy), left, battles with Lucifer (Alida Gunn), right, during rehearsal for the Borderlands Theater production of Pastorela at the Temple of Music and Art in Tucson, AZ.

Satan (Emily Pratt) tempts Bato (Robert Ybanez) as Envy (Jim Klinginfus) watches during rehearsal for the Borderlands Theater production of the pastorela at the Temple of Music and Art in Tucson.