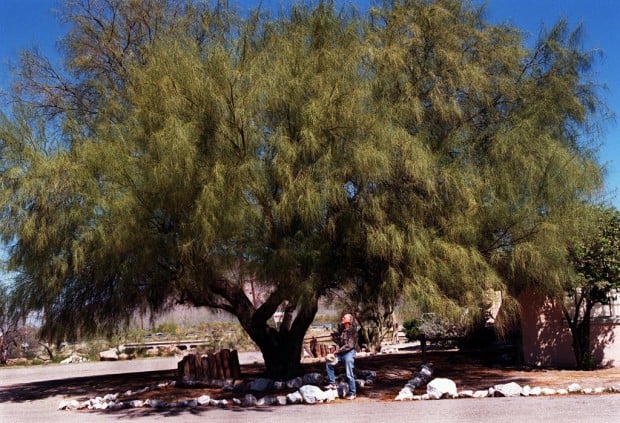 The thorny Mexican palo verde has a life span of about 20 years. 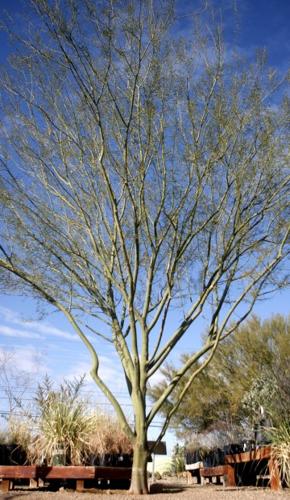 Don't overwater a Desert Museum palo verde or its root system may not be develop properly. 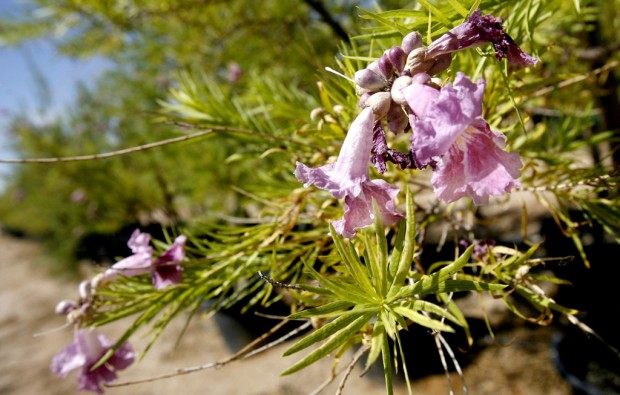 A desert willow will attract wildlife and birds will love it for nesting. Fear not the word "willow" - the tree is not a true willow. 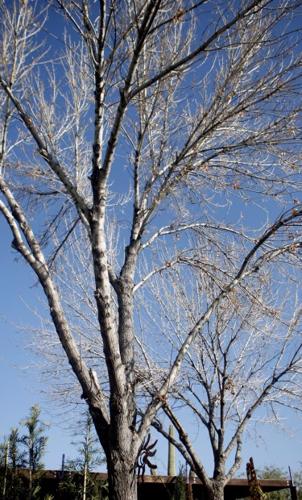 Arizona ash is fast-growing and a moderate-water user. Its foliage turns gold in the fall.

Choosing a tree in a nursery is a little like picking out a puppy without seeing its parents. It may be cute now, but there could be trouble down the road.

Imagining that tree full-grown in its intended location - or seeing a real full-grown version - can help you avoid some regrettable choices.

Drought tolerance/low-water usage and quick growth are usually considered attributes when you're looking for a residential tree in the desert. But there's more to picking the right tree than low-water consumption or rapid growth, say local tree experts.

Here's a guideline to trees that thrive well in our part of the country - yet that doesn't always mean they are smart choices.

Though the fast-growing, drought and frost-resistant, almost unkillable African sumac (Rhus lancea) is not not native, it's a frequent sight around Tucson. Unfortunately, that includes urban washes and the desert surrounding Tucson, where it can crowd out indigenous trees.

"African sumac was really popular back in the '70s," said Irene Ogata, a registered landscape architect for the City of Tucson. "We are finding them in washes," Ogata said, noting that they have been taken off the city's list of trees it plants. The Arizona Department of Water Resources placed the African sumac on its ominous-sounding list, "Tucson Active Management Area Deleted Plants" for crowding out native plants.

Beyond that concern, an African sumac should come with its own landscaping crew. The tree drops its leaves and sprout messy blossoms repeatedly throughout the year. Though often used as "street trees" - planted in the area between the sidewalk and curb - their long, thin leaves are perfect for clogging cars' ventilation intakes. And there's no such thing as having one African sumac, at least not for long. They propagate like dandelions.

Several species of the fast-growing, relatively low-water-use eucalyptus are seen around Tucson. They grow quickly, some to 80 feet or more. Besides those laudable characteristics, they're aromatic, giving off a scent many people like. But they also tend to have weak limbs prone to break off in wind and, because of their size, have a reputation as "house killers." One Tucsonan spent more than $5,000 to have an 80-foot tall eucalyptus in his yard removed a few years ago. It was dying and threatened his and a neighbor's house. Much of the expense was attributable to the need for a very large construction crane to remove the branches and trunk as the tree was boxed in by power and telephone lines. Utility lines and adjacent buildings, regardless of the tree species, are something to consider when choosing a tree to plant.

Frost tolerance is another consideration. Some trees will tolerate a typical Tucson winter, with overnight lows into the upper or mid-20s, but may suffer severe damage or be killed by temperatures in the teens. Ogata said she's seen local eucalyptus that were damaged by the two exceptionally hard freezes in early 2011.

"Eucalyptus have weak wood," said Stacie Eichinger, an Arizona Certified Nursery Professional at Civano Nursery, 5301 S. Houghton Road. "As far as falling over on your house, that probably won't happen. But you could have large branches fall. They do have (that) tendency, especially if you make them grow fast" with excessive watering, Eichinger said.

This is Eichinger's least favorite desert tree. "It has massive thorns, really long leaves" and "drops those needles almost constantly. And, it's short-lived, only 20 years or so, and doesn't produce much shade."

Ogata and Eichinger say there are several native, or well-adapted non-native and hybrid species that will provide good shade without a lot of water.

Arizona ash "is a wonderful tree for snowbirds who come down here and want that leafy tree" that reminds them of home, said Civano's Eichinger. It's a fast-growing, moderate-water user with foliage that turns gold in the fall. It provides shade in the spring, summer and fall and, when the leaves fall for the winter, allows the sun to get through to warm the house it shaded in the hotter months, said Eichinger.

If you don't insist on native trees, Eichinger said the evergreen pistache is a good tree for small gardens. "They're evergreen and very, very clean. Not the fastest growing, but they only get 15 feet tall and with a 10 to 15-foot spread." As such, she said, they're good for planting on the side of a house with a narrow lot. They also have "a much smaller root system (than many trees), they're not going to upheave sidewalks, and they're very cold-hardy." She said the only ones that froze out during last winter's hard freezes were the trees in 15-gallon containers at the nursery, and trees around town that had not yet become well-established.

The Desert Museum palo verde (thought to be a naturally occurring hybrid of the Mexican, blue and foothill palo verde discovered by an Arizona-Sonoran Desert Museum scientist) has been a favorite of Ogata's and the city's. But these, Eichinger and Ogata say, shouldn't be watered too heavily.

Ogata liked the Desert Museum palo verde, but warns it can mean trouble.

"The Desert Museum palo verde used to be one of my favorites," Ogata said of these showy trees used in many city right of ways. It's a low-water-use tree, which grows at a reasonable pace to develop a large canopy. But "people tend to overwater them because they want the instant landscape. … These native trees don't need that much water. What happens is that the root system may not be developing" properly. "What we see with the Desert Museum (hybrids) is they get too heavy and topple. It's not that they should survive on just rainwater. It's all about the root system. I guess the message here is water less" and practice "deep watering rather than frequent shallow watering."

Eichinger is still a fan of the Desert Museum palo verde, which even when watered properly is faster growing than the blue and foothill palo verde. She warns that the foothill palo verde is very slow growing and so drought tolerant that it can rot out with water it gets from irrigation systems.

No Sonoran Desert tree list would be complete without the native velvet mesquite. But, again, Eichinger said, water the mesquite less frequently and deeply. She said their characteristic slow growth encourages people to over water, leading to rapid growth but shallow root systems that let trees tip over in the wind.

If you're looking for a faster growing mesquite and don't mind a non-native, Eichinger said the hybrid Chilean mesquites don't have the thorns of some other South American varieties.

If you want wildlife, plant a desert willow, said Eichinger. "It's a really great native tree. People get afraid of it because it has the word "willow" in it. (It's not a true willow.) It's a low-to-moderate-water user. You'll get beautiful orchidlike blooms on it and hummingbirds love it. The birds love it for nesting when it gets bigger."

Civano's Eric Clark puts in a good word for Arizona cypress. "They're native and have a beautiful almost blue color, different form anything else you plant. They can get 25 feet tall by 20 feet wide, if you let them, but they hedge (can be trimmed into hedges) really nicely if you need to screen out something. They're extremely cold tolerant … and drought tolerant when they're established."

Karl Nelson of Civano likes Lysiloma, an Arizona, though not Tucson, native. It's also known as desert fern or feather bush. He said it looks like a small mesquite, "but with feathery leaves, soft to touch. They have a bloom that even looks like a mesquite's and they do get seed pods on them. It's a great tree, but last year they froze pretty badly. But those that were established came back. They're low water use, like mesquite and palo verde," said Nelson.

• To see most of the trees mentioned in this article, visit the University of Arizona College of Agriculture's guide, including a plant walk map, to campus trees: msg.calsnet.arizona.edu/arboretum/plantwalk/chart.cfm

• The Tree Connections link from the Tucson Botanical Gardens website is helpful for plant choice and care: www.tucsonbotanical.org/gardening/tree-connections

Dan Sorenson, a former Star reporter, is a Tucson-based freelance writer. Contact him at d.sorenson@cox.net

Gifts for the desert gardener in your life

Looking for the perfect holiday gift for the gardener you love? Here are some options at various budget levels.

Cooler weather is here. Are your plants prepared for frost? Read on to find out how to protect your plant friends your Tucson desert garden.

Rosie on the House: More questions homeowners should ask

These home maintenance questions often aren't asked, but do deserve most homeowners' attention.

How to respond when your child is lying

Two ways to stop condensation from forming on your windows

Two ways to stop condensation from forming on your windows

The thorny Mexican palo verde has a life span of about 20 years.

Don't overwater a Desert Museum palo verde or its root system may not be develop properly.

A desert willow will attract wildlife and birds will love it for nesting. Fear not the word "willow" - the tree is not a true willow.

Arizona ash is fast-growing and a moderate-water user. Its foliage turns gold in the fall.