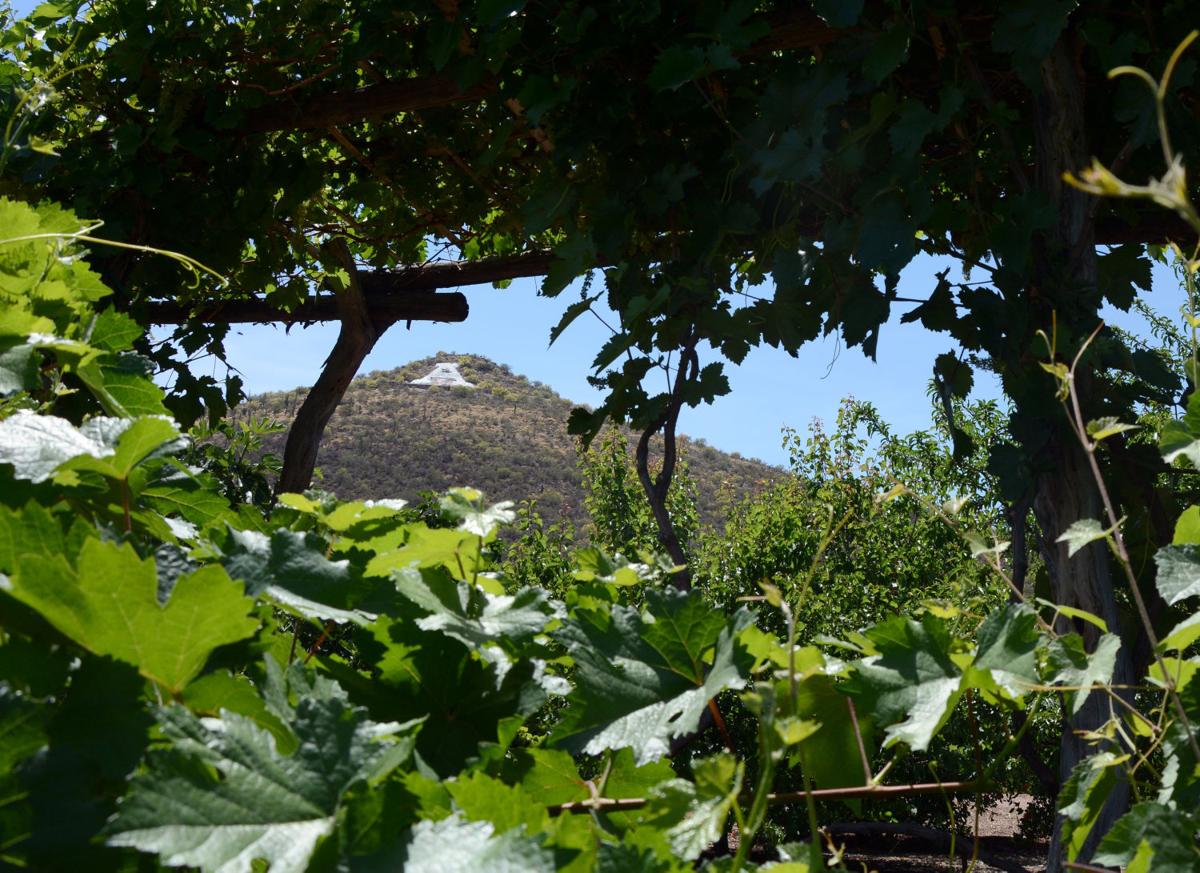 Sentinel Peak, commonly known as “A” Mountain, stands watch over the Mission Garden at 929 W. Mission Lane, west of downtown. 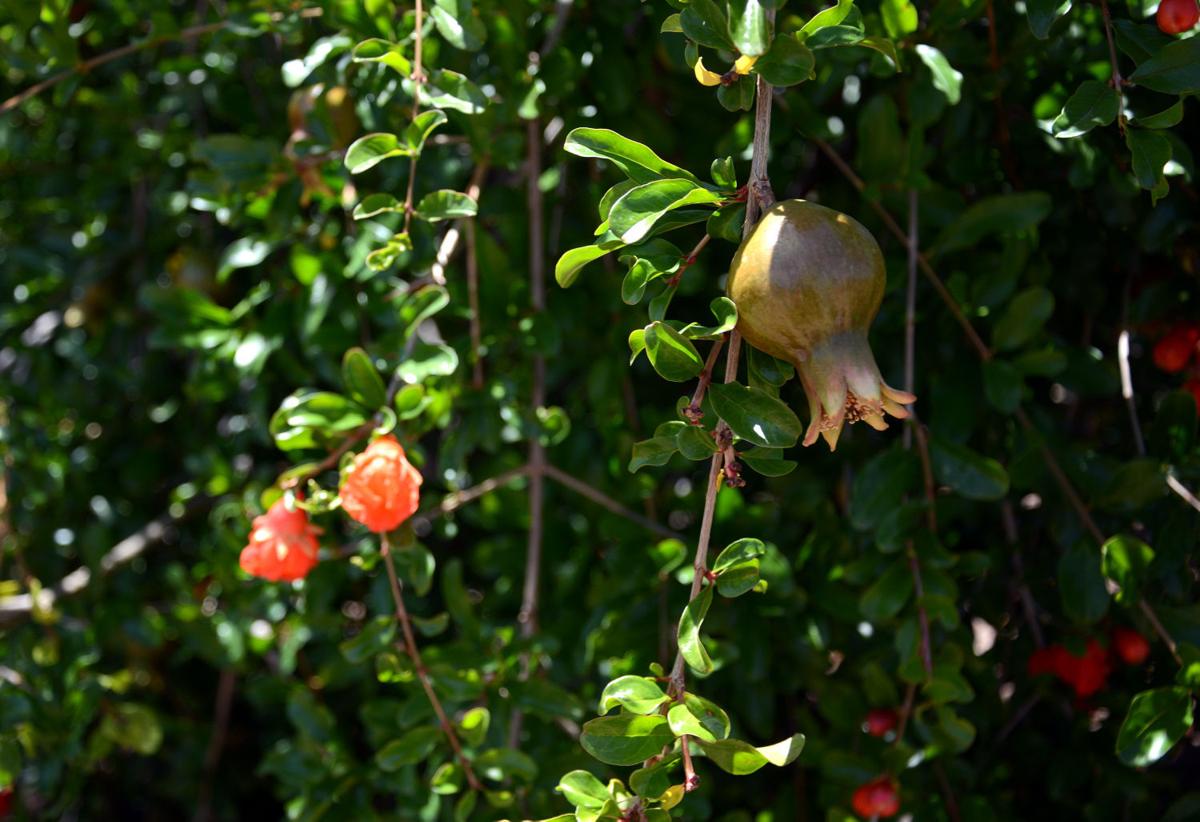 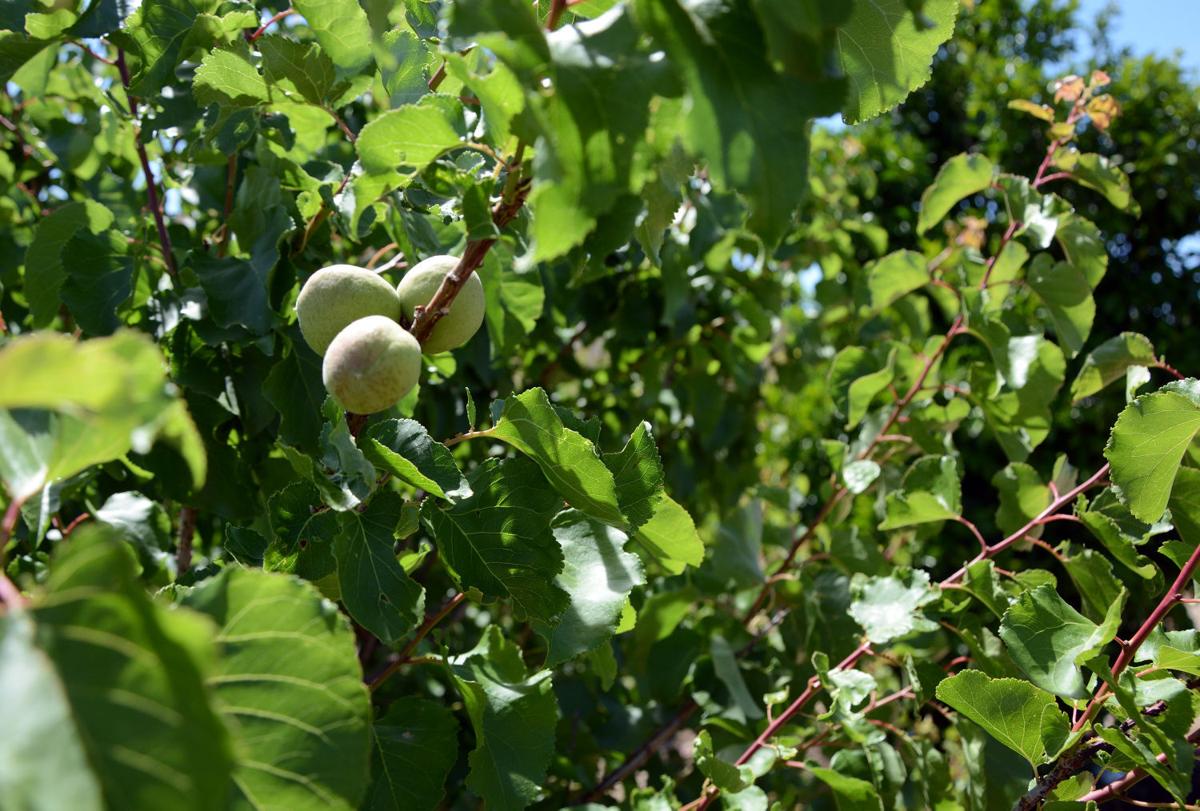 Apricots grow in bunches at Mission Garden, which hosts a number of crops dating to before Spanish missionaries’ arrival here. 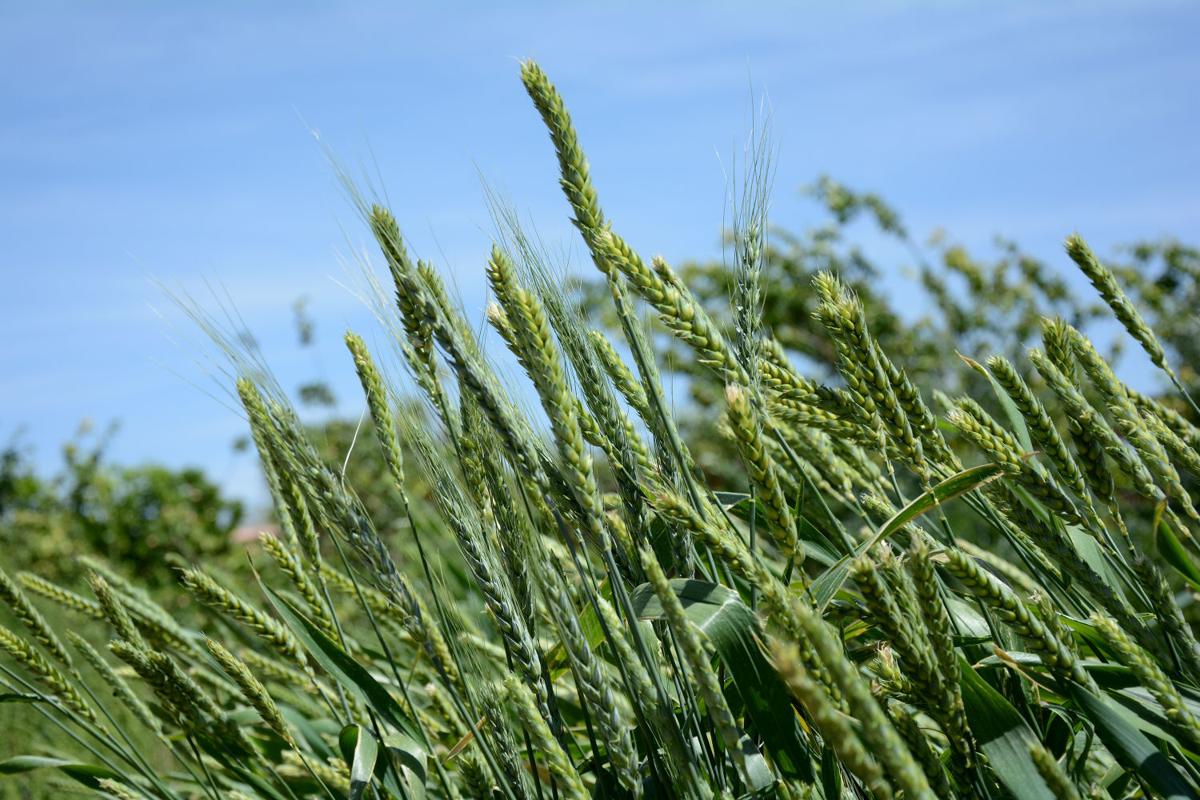 Sonoran white wheat sways in the wind at Mission Garden. 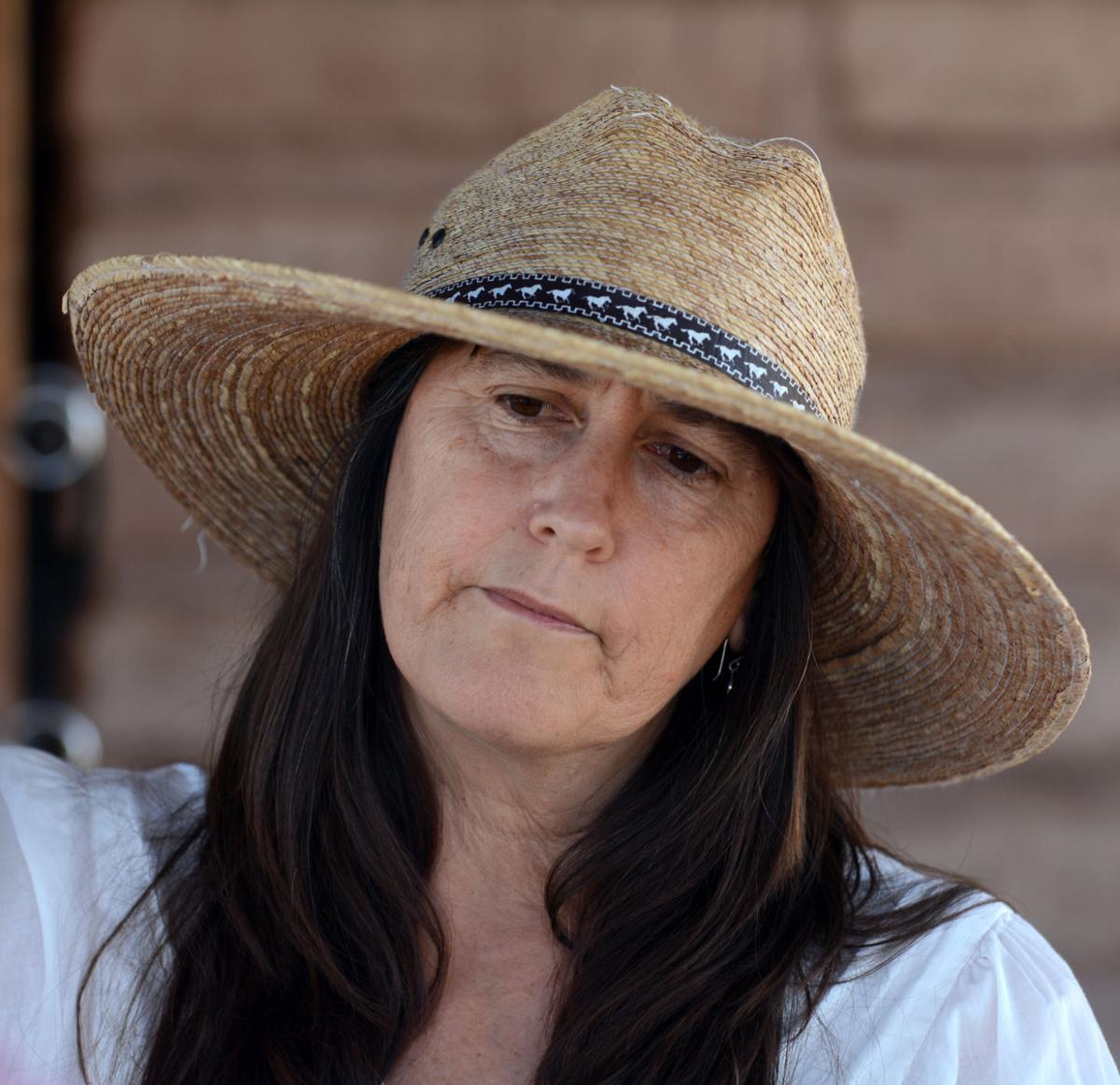 A garden that has been over 4,000 years in the making can provide a few good ideas about to what to grow at home.

The Mission Garden aims to re-create the agricultural history of the Tucson area, from wild corn and tepary beans raised in 2100 B.C. to today’s popular home crops.

Run by the nonprofit Friends of Tucson’s Birthplace, the Mission Garden has been growing since 2012, when the first fruit trees were planted on a four-acre dirt lot enclosed by adobe walls.

Its historical significance starts with that land. It’s the exact spot where the 18th-century Mission San Agustin garden was planted by Spanish missionaries.

Sitting next to the Santa Cruz River, a watercourse ran through it, dumping nutrient-rich clay loam that holds water well, says Dena Cowan, who runs educational outreach activities for the organization.

That soil has turned a goodly part of the former empty lot into a lush Spanish colonial orchard, the first plot you’ll see when you walk into the garden.

Stock for Sonoran white pomegranate, quince, Mission fig, apricot, sour orange, Mexican sweet lime, plum and other fruit came from existing local trees that were planted from 1693 to 1820. Cuttings from those old trees, several found in backyards, were propagated through the Kino Heritage Fruit Trees Project.

The Mission Garden trees have proven over the centuries to survive in the Sonoran Desert climate. Take the pomegranate, for example. It’s a variety that has adapted to drought and heat, Cowan says.

“I love this tree for beginners,” she says. “It can be neglected and it comes back.”

Within the orchard is a vegetable garden. It was common practice at the time to mix these gardens, says Cowan. The vegetables — right now sugar cane, chard, fava bean, white wheat and cilantro—took advantage of the space between trees, the irrigation of the orchard and the winter sunshine when tree leaves dropped.

White wheat also can be found in the Mission Garden’s Spanish colonial crop field. It will be the focus of a celebration of farming and farmers this Saturday, May 14.

Part of the vegetable garden re-creates the efforts of 18th-century Jesuit Phillip Segesser, who asked his family in Switzerland to send seeds.

The Spanish colonial vineyard supports Mission grapes, which were used to make wine for Catholic ceremonies.

Less eye-catching but active plots at the site show the plants that were cultivated by the area’s earliest farmers, as well as the Hohokam and Tohono O’odham.

The fields are sparse right now because most of the planting occurs during the rainy monsoon season, Cowan says. That allowed crops to be easily irrigated by rainwater and the swollen Santa Cruz River.

The Hohokam and Tohono O’odham continued growing these crops, which eventually became the varieties that are familiar today. The Hohokam (500-1450) also cultivated agave and grew panic grass, amaranth and tobacco.

There still is much to do to complete Mission Garden. Plots are ready for plants farmed during Arizona’s territorial and early statehood periods, in Mexican and Chinese gardens and in a garden of the future. Medicinal, native and pollinator gardens also are in the plans.

It may even someday be home to livestock such as chickens and sheep, says Cowan.

If you can’t make the San Ysidro Festival, you can visit Saturdays, 8 a.m.-noon, until December, when hours change to 10 a.m.-2 p.m.

The work helps to maintain the heritage plants that provide a different way to look at history.

Take the Quitobaquito pomegranate, for instance. It was thought to have died out after the prehistoric village where the tree was first cultivated in the 1860s was sold to the National Park Service for Organ Pipe National Park.

Volunteers located a plant at the Desert Botanical Garden in Phoenix and took some cuttings to propagate. One now thrives at Mission Garden.

“Every plant here has a story like that,” says Cowan.

• What: A celebration of fields and farmers in honor of St. Isodore the Laborer, the patron saint of farmers.

• Admission: Free. A $5 donation is requested.

* A 200[200]-yard procession starting east of the Mission Garden at the site of the future Tucson Origins Heritage Park[cq].

* Tohono O’odham and Christian blessings of the field, food and animals.

Handbook will reassure people that they can have a highly successful garden.

Also, how to care for April garden.

Towering tree, popular with hikers, has toppled in Catalinas

Douglas fir could have been growing well before United States became a nation.

Giant tree has crashed to Earth in the Catalina Mountains

A springtime hike in Madera Canyon south of Tucson might include deer sightings, waterfalls and wildflowers. Video by Doug Kreutz, Arizona Dai…

Only the tough survive, thrive in Bisbee garden

A plant has to be able to accept all the terms and conditions of your yard.

Organizers say it will return in 2018.

Sentinel Peak, commonly known as “A” Mountain, stands watch over the Mission Garden at 929 W. Mission Lane, west of downtown.

Apricots grow in bunches at Mission Garden, which hosts a number of crops dating to before Spanish missionaries’ arrival here.

Sonoran white wheat sways in the wind at Mission Garden.