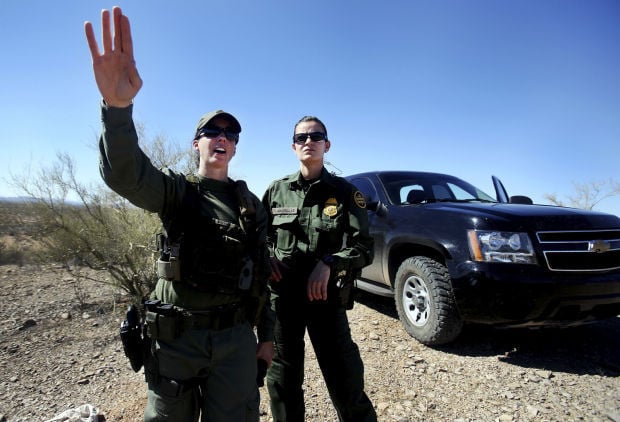 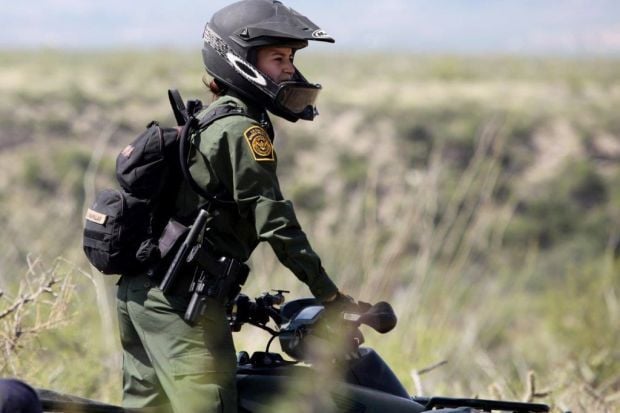 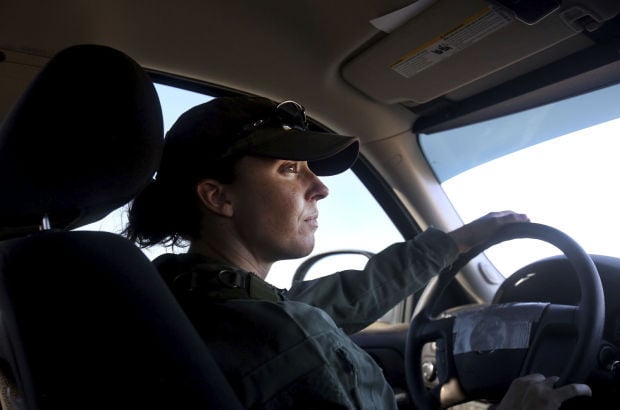 Supervisory Border Patrol Agent Julie Gallagher drives the team’s Chevy SUV as they work in the desert near Sells.

The Border Patrol is hiring,

and women are especially encouraged to apply.

After previous recruitment attempts had limited success, one of the largest law-enforcement agencies in the country is stepping up its efforts to increase the share of women who work as agents in the Southwest. One of the reasons for the special recruitment is the number of female border crossers, which jumped to nearly 121,000 last fiscal year — a 173 percent increase from 2011.

To increase its pool of female applicants, Customs and Border Protection sought for the first time a Title 5 waiver from the Office of Personnel Management to restrict the 10-day announcement to women only. There’s no specific number of positions allotted to women, but the agency is seeking to hire 1,600 agents through this fiscal year, which ends Sept. 30. The waiver does not mean jobs can be offered only to women, but it allows the agency to specifically recruit them.

“First and foremost, we are agents first,” said Leslie Lawson, patrol agent in charge of the Nogales station. “Whether male or female, we need agents that are tenacious, who have physical stamina, are able to learn Spanish and the law, and feel comfortable and confident in an environment where you might be working by yourself.”

Of nearly 21,000 Border Patrol agents, only 5 percent are women, a share that has remained stagnant during the last several years.

The number of those in top leadership positions or specialized units is lower.

Only two of 22 sector chiefs are women; two others recently retired. The Border Patrol didn’t provide the number of station chiefs who are female before deadline, but in 2011 the Star reported women led only five of the 122 stations — including Lawson.

The Border Patrol Tactical Unit has no female agents, and only four women have become members of the specialized Border Patrol, Search, Trauma and Rescue Unit.

In the past, the Border Patrol has recruited on military bases, colleges and through women’s magazines to increase diversity, but the numbers remained the same.

The Border Patrol recognized years ago that its recruiting efforts were not meeting its needs for more female agents, Lawson said.

Along with the need for more female agents to facilitate the screening of female detainees, Lawson said the agency wants to increase its diversity to better represent the populations it serves.

Agency work groups have shown the issue is both recruitment and retention, she said.

“As we women enter our childbearing years, just like in a lot of other professions, we may be the ones to choose to leave the workforce in order to raise our kids,” she said. The Nogales station includes a lactation room.

The shift work and the remoteness of some of the locations agents are assigned to are also issues that other agencies don’t have to deal with, Lawson said.

Across all federal law-enforcement agencies, women make up about 14 percent, said Catherine Sanz, president of Women in Federal Law Enforcement, a nonprofit agency that seeks to address the reasons why women are underrepresented in sworn law-enforcement positions.

“Every agency I’ve spoken to says they have trouble recruiting women,” she said.

Overall, the number of women in federal law-enforcement agencies is down, Sanz said, due to a combination of factors, including attrition and cutbacks. A preference for hiring veterans has also contributed, she said, since women make up only about 15 percent of the military.

Sanz hasn’t heard of the waiver being used before, but she hopes the Border Patrol is successful “to help change the culture of law enforcement across the board.”

The Border Patrol has been talking about the shortage of women in the agency for years, but the numbers aren’t improving, said Robert Lee Maril, a professor of sociology at East Carolina University who has written two books about the Border Patrol.

“If they are really trying to change the situation, why hasn’t it changed?” he asked.

The much lower percentage of women in the Border Patrol when compared with other federal agencies is also attributed, Maril said, to a culture of discrimination.

From his observations and speaking with female agents, he said, “there’s a hostile work environment for many agents, not in every place, where they are not treated as equal, there’s still a masculinist attitude among many male agents that hasn’t changed.”

One of the chapters of Maril’s second book includes the story of an Arizona agent who filed a gender-discrimination complaint with the Equal Employment Opportunity Commission and won.

Issues of sexual harassment, sex discrimination and unconscious gender bias in law enforcement still exist, Sanz said, but she can’t say it happens more at the Border Patrol than at any other agency.

But Nicole Ballistrea, who was hired in 2009, said she’s never felt she was treated differently because she is a woman.

If there’s something she doesn’t know how to do, such as take a car apart at a checkpoint, she sees that as an opportunity to learn.

And when it’s something she can’t do exactly as her male counterparts because of her smaller frame, she said she figures out a different way to do it.

When Lawson first joined the Border Patrol in 1994, there were some men who were not used to seeing women outside the home, but now, she said, “Many of our new agents who come from homes where moms worked outside the homes, they don’t even blink that women are in these roles that were considered nontraditional.”

Lawson personally has not faced institutionalized gender discrimination at the agency, she said.

“That’s not to say that all the men I’ve encountered automatically embrace women in the job.

“I imagine it’s much like the military, and certainly macho images of law enforcement prevail, but agents recognize and respect rank and authority regardless of the gender wearing the rank,” she said.

In her 20-year career with the agency, there have been a lot of firsts for Lawson.

She realizes that women in the Border Patrol and law enforcement in general pressure themselves more than they need to.

Her goal is for the day to come when hiring a female agent in a top position does not make headlines.

“Not every woman is going to want to be out there in the brush, away from her backup,” she said. “But there are women like me out there that’s this is all we know and love. We need to find those women and show them what a great job it is.”

The announcement will close Wednesday Dec. 10

Gunman in deadly Tucson Amtrak shooting was on the run, facing violence charges

The gunman in the deadly Amtrak shooting that left a DEA agent dead had bonded out of jail in California where he was facing violent charges.

Arizona AG tells courts to butt out of legislative moves

The question of whether a ban on schools adopting mask mandates, and other controversial provisions, belong in budget legislation is strictly a "political question" beyond the reach of judges, Brnovich contends.

Supervisory Border Patrol Agent Julie Gallagher drives the team’s Chevy SUV as they work in the desert near Sells. 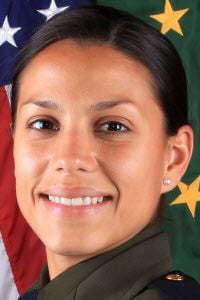