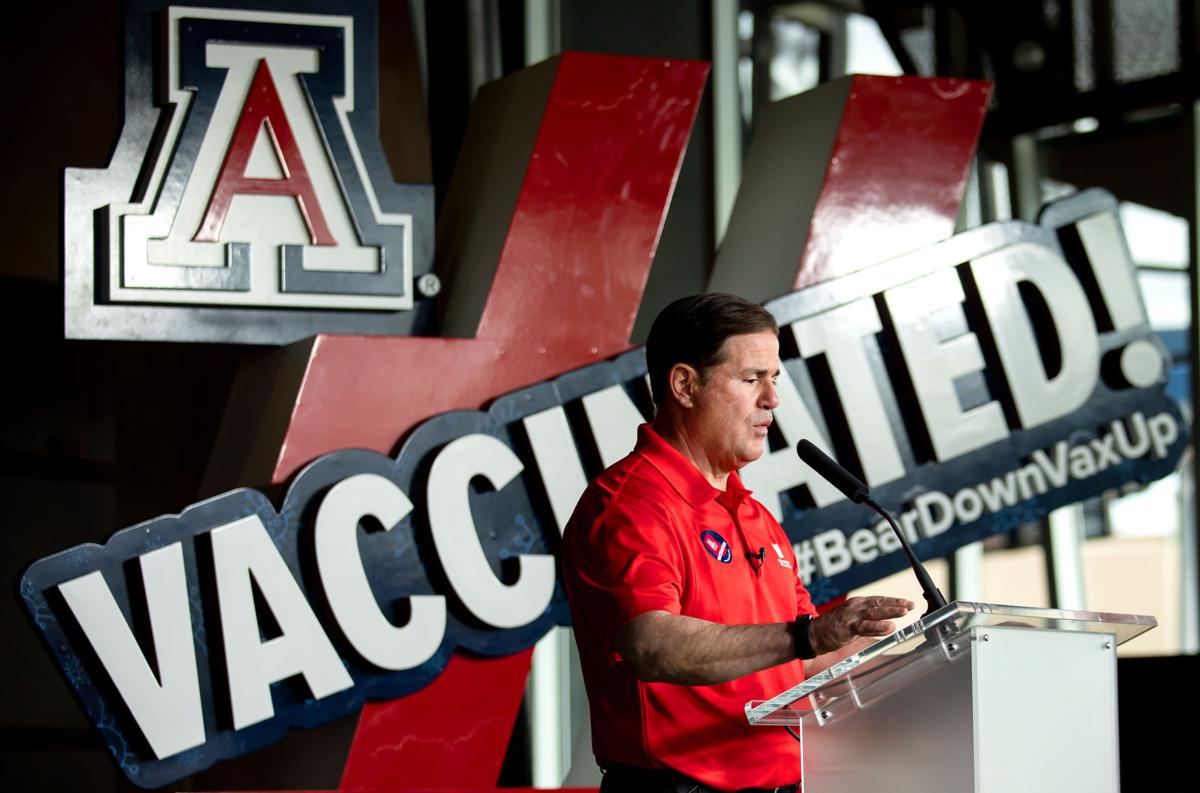 Gov. Doug Ducey speaks to the media during a news conference at Stevie Eller Dance Theater in Tucson. He said getting the vaccine into underserved areas is “our state’s priority.” 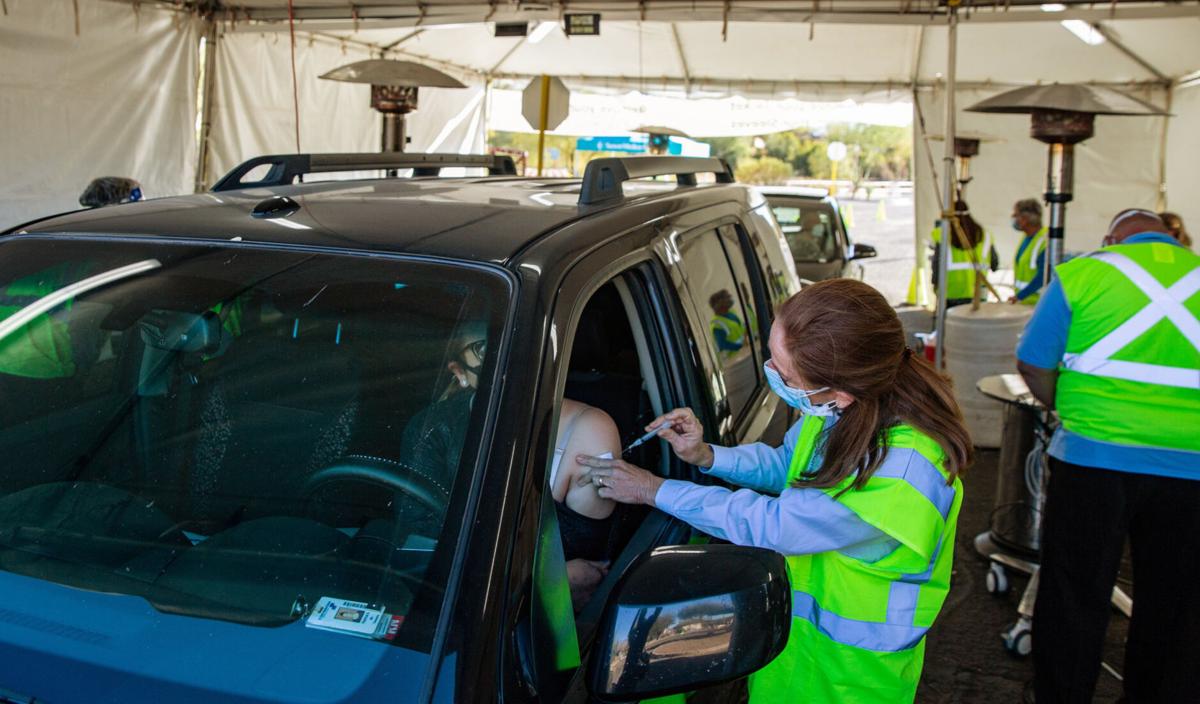 The Pima County Board of Supervisors voted unanimously Wednesday to request the state to reconsider allowing a federally sponsored vaccination center in the county.

Gov. Doug Ducey said Wednesday he would reconsider his denial of a federally run vaccination site in Pima County.

The Federal Emergency Management Agency offered to set up a vaccination center in the county, but the governor turned down the offer last week.

On Wednesday morning, the Pima County Board of Supervisors unanimously voted to appeal to the state to reconsider allowing the FEMA site.

If Ducey rejects the offer from FEMA again, supervisors said the county will work with its congressional delegation to make the county the sponsoring agent of the federal vaccine site and implement it without the state’s approval.

“We’re going to stay focused on distributing the vaccine,” Ducey said at a news conference during a visit to the University of Arizona state vaccination site. “I’m going to revisit this issue because the Board of Supervisors feels so strongly about it. But the objective is going to remain putting shots in arms.”

Tammy Littrell, the FEMA administrator for Region 9, wrote a letter to Christ on March 20 clarifying the state’s concerns were unfounded. She said the vaccines supplying a federal vaccination center would not draw from the state’s allocation, and operations would be carried out collaboratively.

Although the governor said he would reconsider his previous decision, Ducey and Christ reiterated initial concerns that the state would have to extend its own resources to supply the federal point of distribution, or POD.

Christ said she would rather have FEMA give the state the 300,000 vaccines it said would supply the POD and let the state handle distribution throughout its existing sites.

“There were many concerns on why they felt that they couldn’t just give us the vaccine, but that they needed to set up an entire site outside of our already state distribution,” Christ said. “There is a significant list of resources that the county, and if not the county then the state, would have to come up with.”

Christ says those resources include cold storage, pharmacy support, vaccinators support, communications and a registration system. The state already has this infrastructure in place, so the director believes receiving vaccines from FEMA would help to add appointments and increase vaccine availability.

However, Pima County has set up five vaccination centers without reliance on the state. County Administrator Chuck Huckelberry says the resources Christ mentioned have already been established at its existing sites.

“We have vaccinators, we have a pharmacy, we have registration, we have security, volunteers to fill in at both ends, including medical volunteers,” Huckelberry said. “It’s pretty obvious we have the capability and capacity.”

Christ also brought up a concern that the FEMA vaccine site would take too long to implement.

“It will take FEMA a while to mobilize as well,” she said. “So by the time we start to get that vaccine, we could have gotten it out quicker through this than by the time they set up a site and get it running.”

According to Huckelberry, FEMA said it could have the facility running by March 31.

In conversations with FEMA on establishing a federal POD, the county planned to target minority populations by dividing the federal doses between two locations with large Hispanic communities: El Pueblo Center and the Kino Event Center.

While Ducey didn’t directly address the loss of an opportunity to provide vaccines to traditionally underserved populations, he said the state is addressing this issue adequately.

“In terms of a focus on underserved areas, make no mistake, that’s our state’s priority. I believe by the national measurement on that, Arizona’s in second place in the distribution of the vaccine to our underserved or minority communities,” he said. “Our objective is to get the vaccine out faster and to more Arizonans. We can do that with our existing infrastructure. What we need is inventory.”

Huckelberry said he is encouraged by the governor’s reconsideration of allowing a federal vaccination center, but hopes Ducey sees the POD as a success instead of a burden.

“We’re hopeful, but I think the governor should consider this a win-win not only for Pima County, but Arizona. We have the ability to get more vaccine through the federal government so that we can get through the normal distribution process,” he said. “In fact, we are targeting minority populations where the data does show we’re lagging in what we call vaccine equity. So I think that’s a win, too.”

The state health department turned down an offer from FEMA to create a vaccination site in Pima County, although the county expressed it wants the site.

Pima County officials say there are not yet enough COVID-19 vaccine doses available to open up to all adults here, although state-run sites are open to anyone 16 and older.

Tuition and fees at the University of Arizona for incoming undergraduates from Arizona will be about $13,000 per year.

Gov. Doug Ducey speaks to the media during a news conference at Stevie Eller Dance Theater in Tucson. He said getting the vaccine into underserved areas is “our state’s priority.”

The Pima County Board of Supervisors voted unanimously Wednesday to request the state to reconsider allowing a federally sponsored vaccination center in the county.