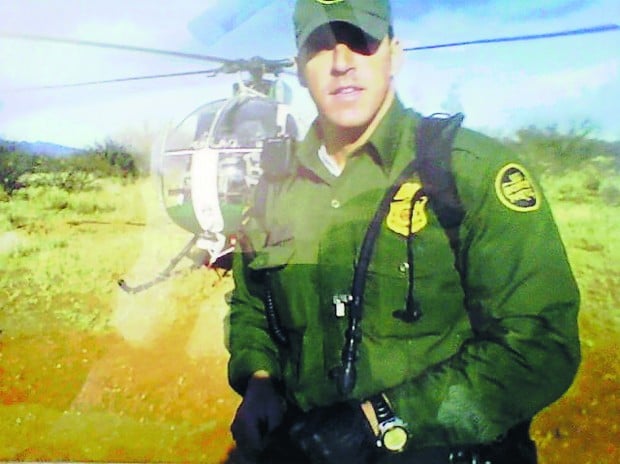 Agent Brian A. Terry, 40, was killed as he and fellow agents exchanged gunfire with suspected bandits in a remote area west of Rio Rico, the FBI said. 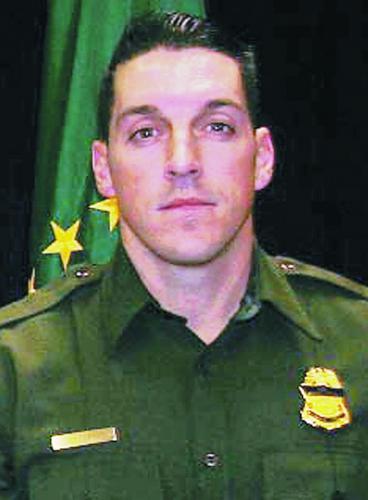 U.S. Border Patrol and Arizona Department of Public Safety vehicles crowd an area near Peña Blanca Lake during a manhunt for a fifth suspect in the shootout. Officers in helicopters and on horseback joined the search. 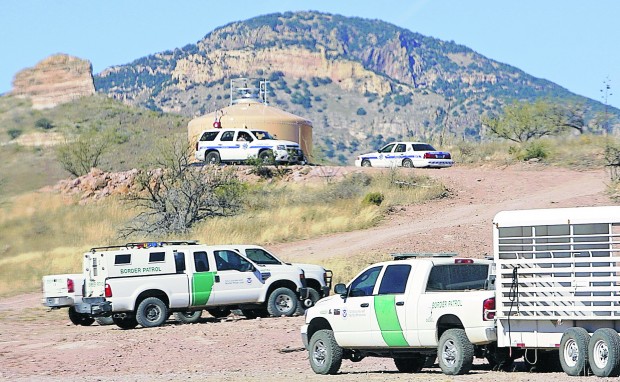 Vehicles and horse trailers from U.S. Border Patrol and officers from the Arizona Dept. of Public Safety at a search staging area near Peña Blanca Lake on Wednesday.
Brady McCombs and Fernanda Echavarri Arizona Daily Star

A Border Patrol agent was shot and killed Tuesday night during a gunbattle with suspected bandits.

Four people, including one who suffered gunshot wounds, were taken into custody. Authorities were searching for a fifth suspect Wednesday, said Rick Barlow, deputy chief in the Border Patrol's Tucson Sector.

Agent Brian A. Terry, 40, was killed when he and fellow agents exchanged fire with a group of five people about 11 p.m. Tuesday in a remote area west of Rio Rico, said FBI spokeswoman Brenda Nath.

Bandits were responsible for the killing, said agent Brandon Judd, president of the agents' union in Arizona, Local 2544. Bandits are criminals who try to rip off loads of drugs and people from smugglers.

Terry and his fellow agents were members of the agency's SWAT team, known as Bortac. They were in the area where the shooting occurred because of the high levels of illegal activity involving armed bandits, Judd said.

"It wasn't a surprise encounter," Judd said. "They knew what they were going into."

Border Patrol officials declined to confirm Judd's account or discuss any of the details of the incident because it is an ongoing investigation. However, Santa Cruz County Sheriff Tony Estrada said an encounter between the tactical unit and bandits is possible in the area.

"The unit that was out there is a unit that specializes in those high-risk encounters," Estrada said. "And there has been bandit activity on and off there and it probably happens a lot more often than we know."

The shooting occurred in a remote area about 10 miles north of the U.S.-Mexico border near Forest Service Road 4197, west of Interstate 19, said Estrada. The area is frequently used by smugglers.

"All these canyons in Santa Cruz County are notorious for smuggling humans and drugs," Estrada said. "Obviously, it is a very dangerous situation for anyone patrolling those remote areas, particularly for the Border Patrol. There is always that threat."

His department was only serving in a support role, Estrada said. The FBI is handling the investigation.

The manhunt for the fifth suspected bandit lasted much of the day and involved officers on horseback and in helicopters scanning the canyons and hills surrounding the area northwest of Nogales.

Santa Cruz County sheriff's deputies found a man just before 2 p.m. on southbound Interstate 19 south of Rio Rico about 10 miles from the Mexico border that fit the description of the fifth suspect. He was turned over to the Border Patrol, but it didn't appear he was the man they were looking for.

Bandits are the lowest of the low among criminals operating along the border, despised even by the smuggling organizations, Judd said.

"This is the biggest scum that you are going to run up against," Judd said.

"There are people out there who wake up every day with nothing else on their mind but to do harm to the citizens of our country and our way of life," Barlow said.

Terry was strong-willed, very focused and "lived to protect his country," said his older sister, Michelle Terry-Balogh, by phone from her home in south Detroit.

Terry, who was born in Flat Rock, Mich., served three years in the U.S. Marine Corps and was honorably discharged in 1994. Afterward, he went to college and worked for two Michigan police departments before joining the Border Patrol in July 2007.

He is survived by his parents, two sisters and one brother, Terry-Balogh said. He was not married and did not have any children. He was set to come to Michigan on Friday for his first Christmas at home in years. Instead, his body will be coming home in a casket, she said.

"It has been devastating," she said. "It's more of a shock than anything. You just never think anything would happen to him."

As a child, he was very accident prone, earning the nickname "Stitches."

"Every time we turned around, Brian was getting stitches," she said.

But he became a big, muscular, athletic man who stood 6-foot-4 and sometimes worked out two to three times a day. His athleticism and skills earned him a spot in the Border Patrol's SWAT team.

"He was, by all accounts, an absolutely outstanding agent," Judd said. "He was everything you would want on this team."

Terry was well-liked by colleagues, said Judd, who worked with him in the Border Patrol in Naco. His sister echoed that, saying he had friends everywhere. They are expecting at least 1,000 people at his funeral in Michigan, she said.

Terry's goal was to become a Secret Service agent. He joined the Border Patrol to get in the door at the Department of Homeland Security and hoped to work his way up, Terry-Balogh said.

The third of four children, he was the rock of the family, she said.

"He always wanted for people to get along, no matter what was happening. He would always say, 'I've got your back,' " she said. "It's sad because he got shot in the back."

Napolitano in Tucson today to visit with Border Patrol officials

Department of Homeland Security secretary Janet Napolitano is scheduled to be in Southern Arizona today meeting with Border Patrol officials.

The Border Patrol just sent this "open letter" from the new chief of the Tucson Sector, Randy Hill. Hill comes to the busiest sector on the U…

Brian A. Terry became the 10th agent to die on duty in the Border Patrol Tucson Sector, according to Arizona Daily Star archives.

The reaction to Tuesday's fatal shooting of Border Patrol agent Brian A. Terry is rolling in from politicians and organizations across the country. Here's a sampling.

Agent Brian A. Terry, 40, was killed as he and fellow agents exchanged gunfire with suspected bandits in a remote area west of Rio Rico, the FBI said.

U.S. Border Patrol and Arizona Department of Public Safety vehicles crowd an area near Peña Blanca Lake during a manhunt for a fifth suspect in the shootout. Officers in helicopters and on horseback joined the search.

Vehicles and horse trailers from U.S. Border Patrol and officers from the Arizona Dept. of Public Safety at a search staging area near Peña Blanca Lake on Wednesday.
© Copyright 2022 Arizona Daily Star, PO Box 26887 Tucson, AZ 85726-6887 | Terms of Use | Privacy Policy | Do Not Sell My Info | Cookie Preferences
Powered by BLOX Content Management System from TownNews.com.
You don't have any notifications.