It may sound counterintuitive for an agency focused on law enforcement, but the Tucson Police Department is spending time and resources trying to keep people out of jail.

Three teams of officers, often working hand in hand with local social service agencies, visit corners of the community where vulnerable residents tend to be. They search for people struggling with homelessness, drug use and serious mental health challenges, and guide them to whatever help they need.

Most TPD officers still go out on patrol and still make plenty of arrests — FBI crime data for 2019 show that Tucson had the nation’s highest arrests per 100 residents. But members of the Mental Health Support Team, Substance Use Response Team and Homeless Outreach Team rarely respond to emergency calls. Instead, they focus on prevention, outreach and follow-up.

“These three teams work with a population that is responsible for a large number of calls,” said Kevin Hall, TPD assistant police chief. “If they can successfully engage them in treatment, then it’s a reduction of 911 calls.”

Salary and employee-related expenses for all three teams total about $2.75 million, roughly 1.5% — of the department’s more than $194 million budget.

The Arizona Daily Star spent time with each team in recent months through a reporting fellowship from Solutions Journalism Network. On visits to Tucson neighborhoods, washes, alleys and homeless camps, the Star saw examples of how officers interact with vulnerable community members — offering services and rides to community providers while working to gain each person’s respect and trust.

A police encounter that ends with help rather than punishment can change the course of a life. Arrests and convictions can make it harder to get a job, school funding, housing or other government aid. And the negative impacts can ripple outward if the person arrested is supporting a family.

“There’s a lot of collateral damage that goes with jail and arrest that we’re trying to avoid with these folks who are simply suffering from a disease,” Hall said.

Tucson is not alone in this trend toward taking policing out of the squad car and into the community. Police departments around the county are trying new ways to address the cause of problems and have partnered with mental health clinicians and social workers, housing programs and nonprofits to help create safer communities.

At TPD, the three teams — all under the umbrella of the department’s Mental Health Support Unit — each have a primary focus. But all of them can respond to any issue related to mental health, substance use or homelessness, as those problems often intersect.

The effort started in 2014 when the department created a three-member team to better respond to mental health crises and to get people treatment before they potentially harm themselves or others. The team works with behavioral health clinics like Community Bridges, Inc. and the Crisis Response Center, where they drop off patients who need to get back on track with treatment. They can also request crisis mobile teams of clinicians.

When the opioid crisis worsened in Pima County, the Tucson Police Department used a similar approach to address that problem. Officers on the Substance Use Resource Team began offering to deflect drug charges for those who agreed to enter treatment. The team of six officers follows up after overdoses with educational visits focused on drug use, treatment options and other resources. Peer support specialists employed by CODAC, a behavioral health facility, go out with the officers and help transport people to treatment centers.

Taking steps to better address mental illness and addiction highlighted the need to focus on homelessness, which is often a symptom of the other two issues, Assistant Chief Hall said. So last year the department created a three-member team to respond to nonemergency reports of homelessness and to connect people with resources for housing and other services. The homeless outreach team works with the city of Tucson’s homeless outreach team, Primavera Foundation, the Salvation Army, Gospel Rescue Mission, Veterans Affairs, Old Pueblo Community Services and substance use and mental health resources.

“There's a lot of collateral damage that goes with jail and arrest that we're trying to avoid with these folks who are simply suffering from a disease.” - Kevin Hall, TPD assistant police chief

All TPD officers are trained to offer resources to people who need help rather than punishment. But the teams’ narrow focus gives them extra strength, Hall said. While a patrol officer only has a few minutes to spend with someone before getting redirected by a 911 call, team members have whatever time it takes to connect with someone in need and explain available resources in a way the person can understand. While they don’t hide that they’re police officers, they wear khaki pants and black shirts designed to help them look more approachable.

The department has come to recognize that traditional policing “is not really fixing the problem, it’s just addressing symptoms,” Hall said. “So rather than address the symptoms we would like to address the problems and see if that can have a greater impact.”

As criticism of over-aggressive policing and discussions of defunding police agencies has taken hold nationwide in recent months, so have questions about whether police should have any role in efforts to help solve community problems. Other agencies are better equipped to address homelessness and behavioral health problems — and having officers on the scene can ramp up emotions and lead to tragedy, some researchers say.

Assistant Police Chief Hall says police have become the default to respond to issues of behavioral health and homelessness. He said he supports alternative, community-based responses and would be glad to see his officers turn over the social work aspect of their jobs as much as possible.

Getting there is a long and difficult road that would entail challenges ranging from training 911 dispatchers in how to interview callers who may not know when a person is in crisis, to teaching the public where to report a potentially dangerous situation if not to the police.

“One of the benefits from this past year and the social justice movement has been that now there’s a recognition by elected leadership to start building these alternative pathways, so that we don’t have to go to these events,” Hall said. “Or at the very least, we have more options to offer folks when we do come across them.”

City officials recognize this as well and are working to strengthen community safety resources outside of the Police Department. Last summer, the Tucson City Council launched a pilot program to evaluate the city’s safety resources and get community feedback for improvements.

"For too long we've been asking too much of our police officers." - Regina Romero, Tucson mayor

The 2021 budget, approved in July, included funding for the program, allows the city to hire eight social workers, a “housing first” director and allocate $500,000 for a racial equity assessment.

In order to address community safety holistically, Tucson needs to reimagine what providing public safety means for the community, Romero said. She says that will require working across government departments and with nonprofit social service organizations to cover all aspects of community safety.

“For too long,” she said, “we’ve been asking too much of our police officers.”

Outreach officers treat homelessness as a symptom, not a crime

Find the entire project, including videos, at tucson.com/TPDteams

Tucson's Substance Use Resource Team educates people about community resources and provides rides to detox facilities for people ready to take that step.

Tucson Solutions: Outreach officers treat homelessness as a symptom, not a crime

Homeless Outreach Teams with the city and the police department respond to calls about camps and connect people experiencing homelessness with resources including permanent housing.

A man accused of deliberately using an SUV to chase down and kill another man was arrested Friday, police say.

Watch Now: Ride along with TPD's substance use resource team

This team of Tucson police officers is working to address the opioid crisis through treatment rather than punishment. As part of an Arizona Da… 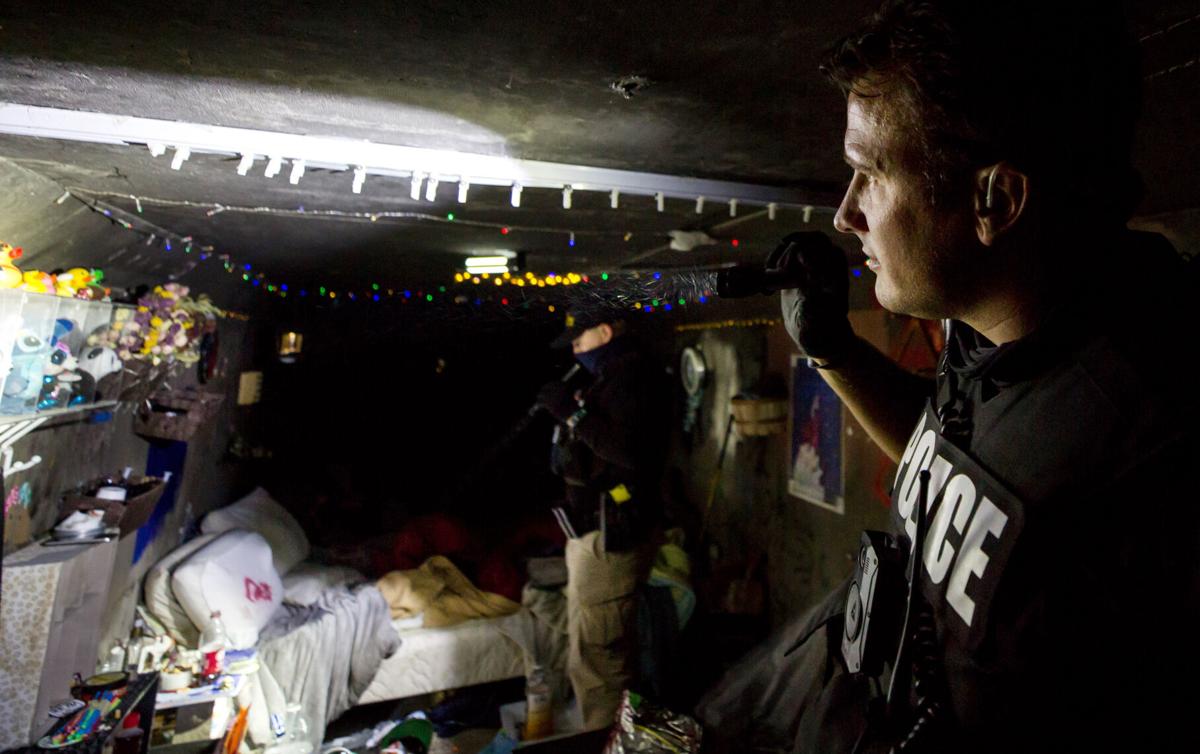 Officer Chris Ciarvella, far right, of the Tucson Police Substance Use Resource Team, visits a drainage tunnel north of downtown Tucson that people have tried to turn into a home. Officers often find decorations and personal items in tunnels like these along Tucson’s washes — but sometimes along needle caps or other signs of drug use. 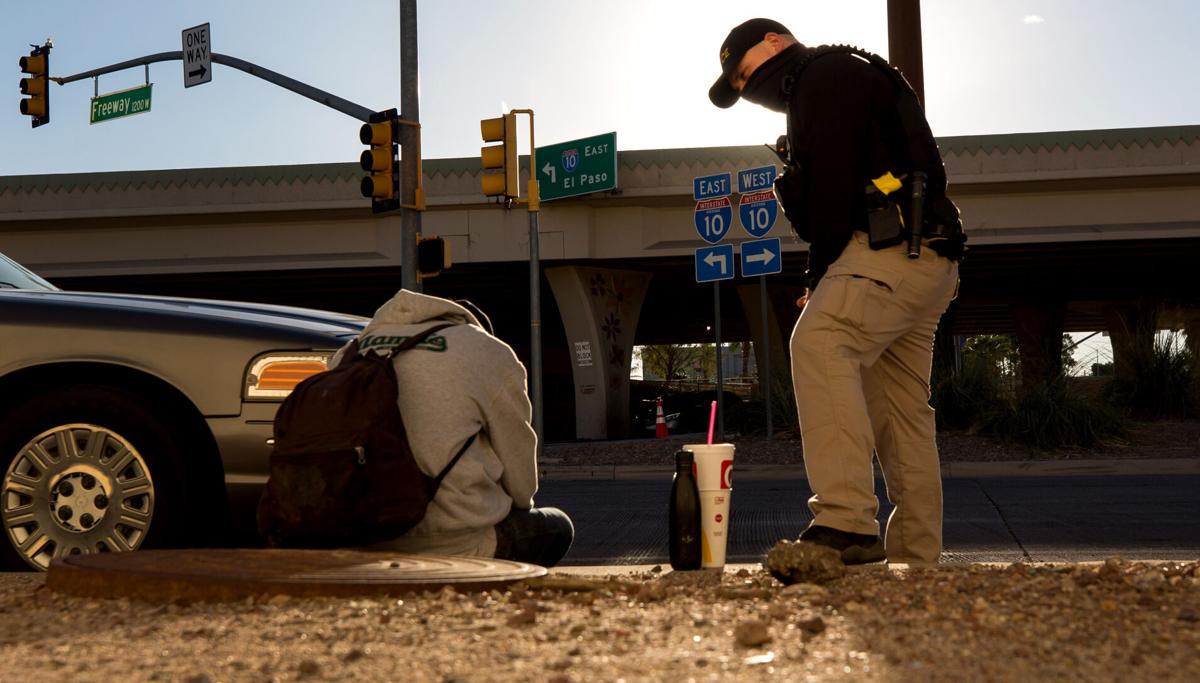 Tucson police Officer Alex Russell talks to a man experiencing homelessness, who declined to give a name, about the different resources available to him. 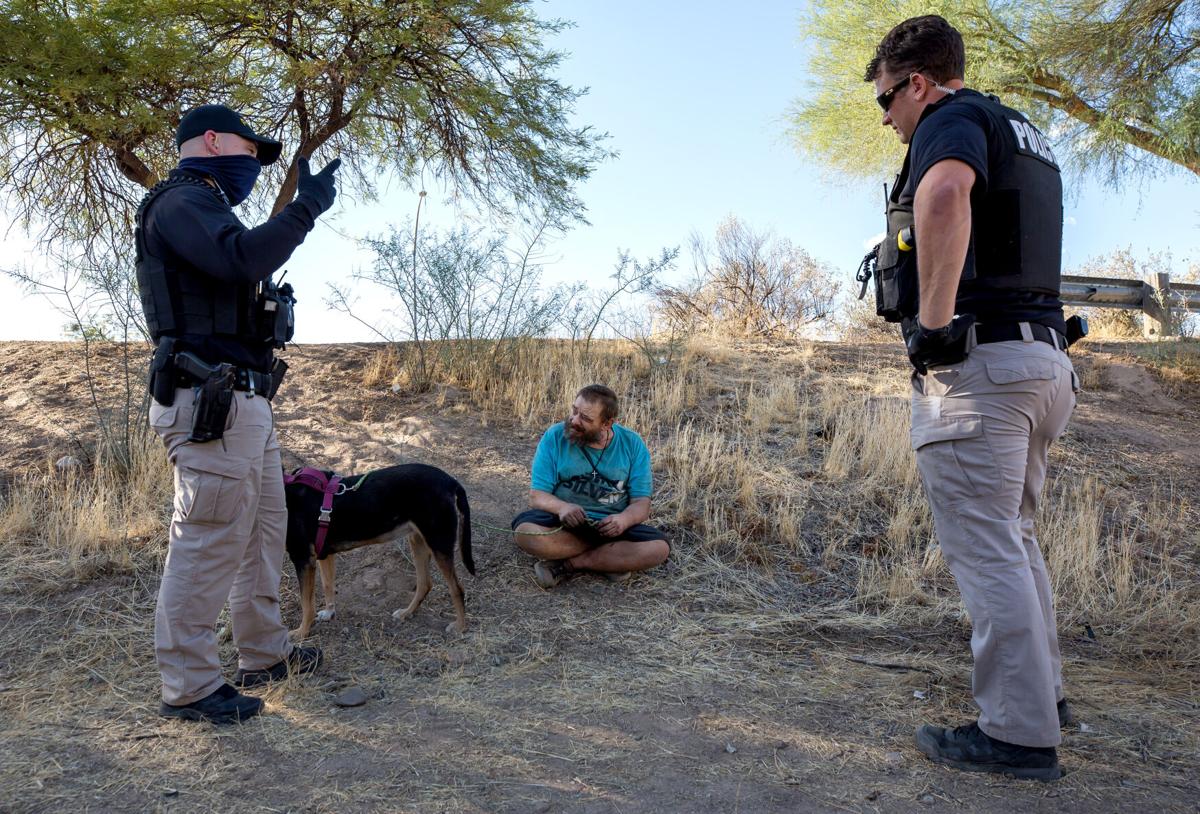 Officers Alex Russell, left, and Chris Ciarvella, both with the Police Department’s Substance Use Resource Team, talk with Daniel Helseo, a man experiencing homelessness who is struggling to get housing. Officers have been helping him for about a year. 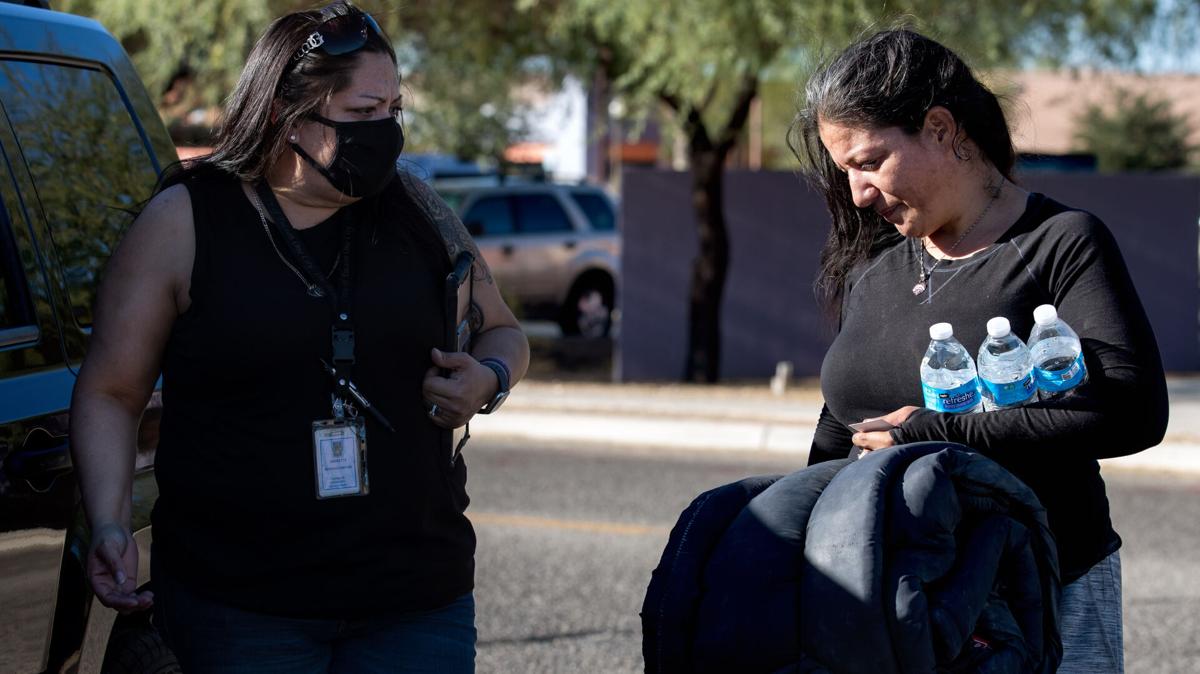 Annette Benitez Mejia, left, who works for the city of Tucson’s homeless outreach program, gives Nevenka Obradovich, who’s been living on the streets for almost a year, a sleeping bag and some water. “It’s not as easy as people think just to, you know, ‘Get a job! Get off the street!’” says Obradovich.