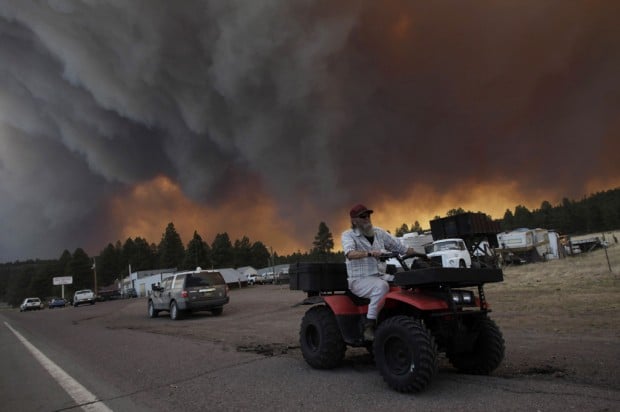 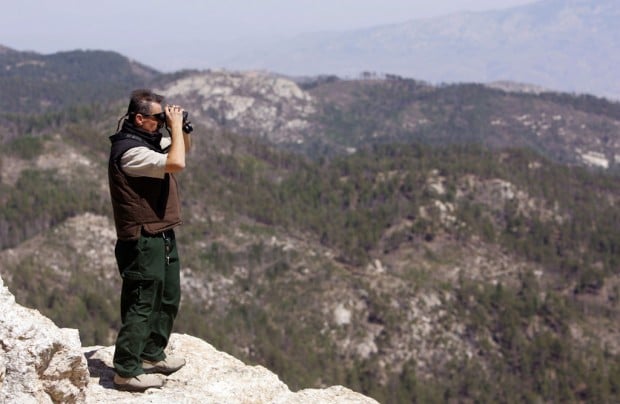 David Medford, a lookout for the Coronado National Forest, was keeping an eye out for smoke on Mount Lemmon from his perch on the Lemmon Rock Fire Lookout Monday. Hikers won't be able to reach this spot starting Thursday - only the road to Summerhaven will be open, until the arrival of "significant moisture." 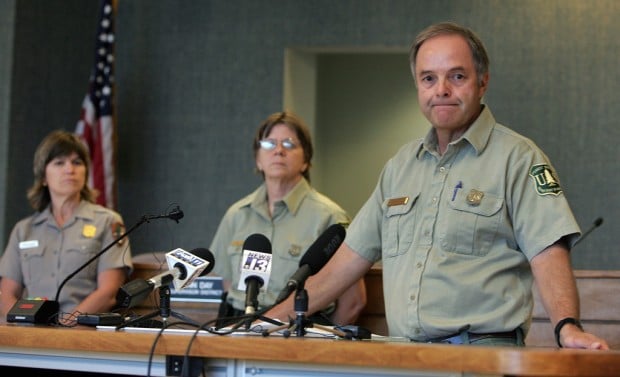 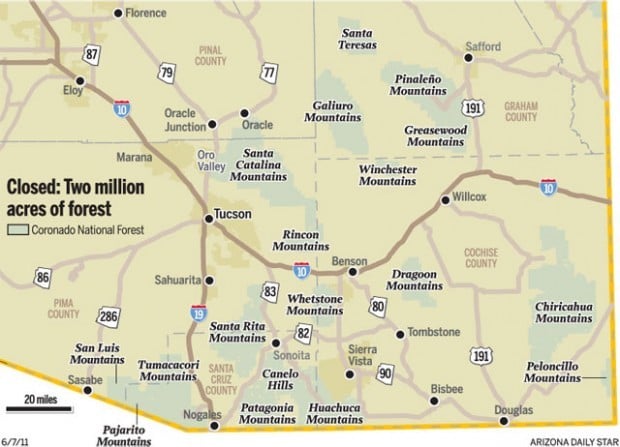 Hikers, campers, bird-watchers and others who love outdoor recreation will be barred indefinitely from one of their most prized preserves: the Coronado National Forest.

Officials announced Monday that the entire 2 million-acre forest will be closed at noon Thursday because of extreme fire danger.

"The closure will remain in effect until significant moisture arrives," said Jim Upchurch, supervisor of the forest encompassing mountain ranges across Southern Arizona.

"We recognize the impact this closure will have," Upchurch said. "But these are unprecedented fire conditions."

The only exception will be that the Catalina Highway to Summerhaven in the Catalina Mountains north of Tucson will remain open to residents, business operators and the public during daylight hours. But no stops may be made at overlooks, trails or other sites along the way to Summerhaven. The road will be closed at night.

Violators could face fines of up to $5,000, imprisonment of up to six months or both, said Heidi Schewel, a spokeswoman for the forest. She said the last time the forest was closed because of fire danger was about eight years ago.

Sites affected by the forest closure include several Scout and religious camps in the Catalinas.

"Hundreds and hundreds of girls are going to be very disappointed to not be camping up there, but we support the decision to close the forest," said Debbie Rich, chief executive officer of the Girl Scouts of Southern Arizona - Sahuaro.

She said 490 campers, ranging in age from 7 to 17, were registered for camping this summer at the Girl Scout camp.

"We hope to reschedule the camps that were slated for June and hold them in July," Rich said. "But our camp staff (of about 20 counselors and junior counselors) won't have work for the month of June."

Other groups with camps in Southern Arizona - as well as hikers, rock climbers and casual forest visitors - will also have to cancel outings or travel to distant sites in other forests.

Officials said they saw little choice but to close the forest in view of what Upchurch described as "an unprecedented fire season."

Noting large fires such as the Horseshoe 2 Fire raging in the Chiricahua Mountains and the Murphy Fire scorching the landscape west of Tubac, Upchurch said firefighters are reporting fire behavior "as extreme as they've ever seen it."

He said officials decided a closure was necessary because "the great majority, if not all the fires, on the Coronado National Forest (this year) have been human-caused. Causes of fires include ricocheting bullets, campfires, welding equipment and possibly ignition by smugglers or illegal immigrants," Upchurch said.

He acknowledged that enforcement of the closure will be a challenge.

"With 2 million acres of national forest, we can't be everywhere," he said. "But we will have enforcement officers out and about."

Kristy Lund, acting fire-management officer for the forest, said that "it's a real worst-case scenario for us."

Even the closure can't prevent fires if dry lightning storms move into the area. "With no rain," Lund said, "virtually every lightning strike will start a fire."

Click the link below to download a single KML file containing information provided by the Active Fire Mapping Program for each active fire.

The Murphy/Pajarita Fire near Rio Rico and Tubac has burned 50,122 acres and was 25 percent contained as of Monday night, said Bobby Matthews,…

SPRINGERVILLE - Stiff winds whipped up the gigantic Wallow Fire in the mountains of Eastern Arizona on Monday, forcing the evacuation of a thi…

County health officials are warning residents with compromised health to limit their exposure to the smoke around the Pima County area, althou…

The Wallow Fire started on May 29, 2011 and burned through nearly 538,000 acres of Apache-Sitgreaves National Forest in northeastern Arizona. …

People enjoy outdoor activities in the cool weather Monday, June 6, 2011 on Mount Lemmon. Due to extreme fire danger the Coronado National For…

The Wallow Fire: A look back

The Wallow Fire started on May 29, 2011 and burned through nearly 538,000 acres of Apache-Sitgreaves National Forest to become the largest wil…

David Medford, a lookout for the Coronado National Forest, was keeping an eye out for smoke on Mount Lemmon from his perch on the Lemmon Rock Fire Lookout Monday. Hikers won't be able to reach this spot starting Thursday - only the road to Summerhaven will be open, until the arrival of "significant moisture."