Hank Brouwer has brought a motorcycle bike hearse to Southern Arizona. Brouwer started his business, Boot Hill Hearse, in Canada and plans to retire in Tucson. 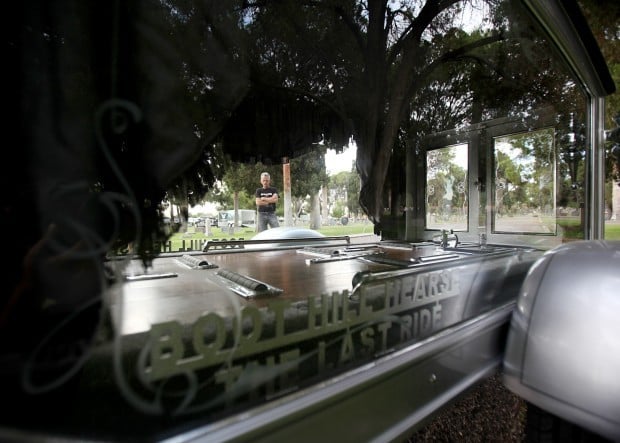 Boot Hill Hearse owner Hank Brouwer says he will provide the biker-hearse service for free to men and women who die while serving in the armed forces and for first responders.

No matter their life experiences, a spectrum of people seem intrigued by the services of two new Tucson businesses.

Made by the Tombstone Hearse Company in Bedford, Penn., the motorcycle hearse is modeled after Victorian-era horse-drawn funeral carriages. The coach is towed by a three-wheeled motorcycle, or trike.

According to the company's website: "Massive twenty-inch spoke wheels, along with low profile tires, gives the unit a wagon wheel look of times long ago. The interior features laminated Brazilian walnut floor deck, with chrome casket rollers and retaining hardware. The cut mohair side and step-down deck accent the walnut floor and the one-inch chrome and stainless steel side rails. Thick velour curtains line the decoratively etched safety glass windows, topped off by a button-tucked silver-grey headliner."

"It's a good idea. It's going to have limited use, but it's something different, something to try," Ron Adair, president of Adair Funeral Home said.

John Chapman, general manager for Adair's funeral homes, anticipates the trike-and-coach combination will appeal to motorcycle enthusiasts as well as members of law enforcement, first responders, military personnel and anyone looking for an alternative to a traditional send-off.

"The idea is excellent," he said. "We've seen it being used in a few other cities, and for those who are interested in motorcycles, it's a beautiful tribute. We're excited about it.

"I think it has a definite market. For those who are in a position to afford it, it will be great," Chapman said.

In Tucson, rental of a typical hearse is $250 or less, Chapman said.

Spouses Hank Brouwer and Marsha Johnston started Boot Hill in Ontario, Canada, in 2011 after seeing the motorcycle hearse in Detroit at a friend's funeral.

"I've been a biker for 40 years, and I have a lot of friends, and I've always ridden in funeral processions to pay my respects," Brouwer said.

But the typical hearse always seemed out of place amid hundreds of motorcyclists escorting the deceased to his final resting place, he said.

At the Detroit funeral, "we had a procession and it was awesome. I couldn't stop looking at it, so I decided to start one in Canada. I really didn't think it would take off as quickly as it did."

Back in Canada, Brouwer ordered a black Harley Davidson Road King Trike and matching custom-built funeral coach, and he's motored caskets and urns across the province.

The couple also owns a home in Vail, and Brouwer is an active volunteer at the annual Tucson Rodeo. For the last five years, the couple has split their time between the desert and Canada. Within the next three years, they expect to retire to Tucson permanently, so the time was right to add a second motorcycle and coach to Boot Hill Hearse Company for use exclusively in Arizona.

The American Heritage Hearse Service began operating in Tucson last month and was hired for its first funeral procession several weeks ago. The family-owned company is managed by Brian Aagaard. The company already operated Big Truck LLC, a sand and gravel company, but was looking for a secondary business opportunity. A motorcycle hearse service seemed like a natural fit. After all, said Aagaard, "it's still transportation."

As for potential clientele, Aagaard said, "I'm not trying to just go after motorcyclists. The Victorian styling of it, a lot of the older ladies really have enjoyed it. It appeals to a lot of people. The first generation of the baby boomers, they have been really interested in it. They said it reminds them of something their grandparents used."

American Heritage Hearse Service also plans to donate use of their coach and trike for the next Missing In America Project memorial ride to the Southern Arizona Veterans' Memorial Cemetery in Sierra Vista, said Bob Day, the Arizona coordinator for the national organization that locates, identifies and inters the unclaimed cremains of veterans.

"My grandfather was a vet. He had a Purple Heart," Aagaard said. "We decided it would be a great way to help the vets out. It's the least we can do for the service they gave our country."

Brouwer also offered his services free to the Missing in America Project. His Canadian roots are not a factor.

"I'm very patriotic, no matter where I am, for people who fight for our freedom," he said.

And he agrees with Aagaard that the service appeals to a variety of people.

After a 180-mile funeral procession in Ontario earlier this year that included almost 200 motorcyclists, Brouwer recalled: "An old lady came up to me when we pulled into the cemetery, and she said, 'I have to tell you something. You guys know how to do a funeral. This is an amazing tribute.' "

Items and services you shouldn't skimp on

Items and services you shouldn't skimp on

What to think about before switching to online banking

What to think about before switching to online banking

Hank Brouwer has brought a motorcycle bike hearse to Southern Arizona. Brouwer started his business, Boot Hill Hearse, in Canada and plans to retire in Tucson.

Boot Hill Hearse owner Hank Brouwer says he will provide the biker-hearse service for free to men and women who die while serving in the armed forces and for first responders.