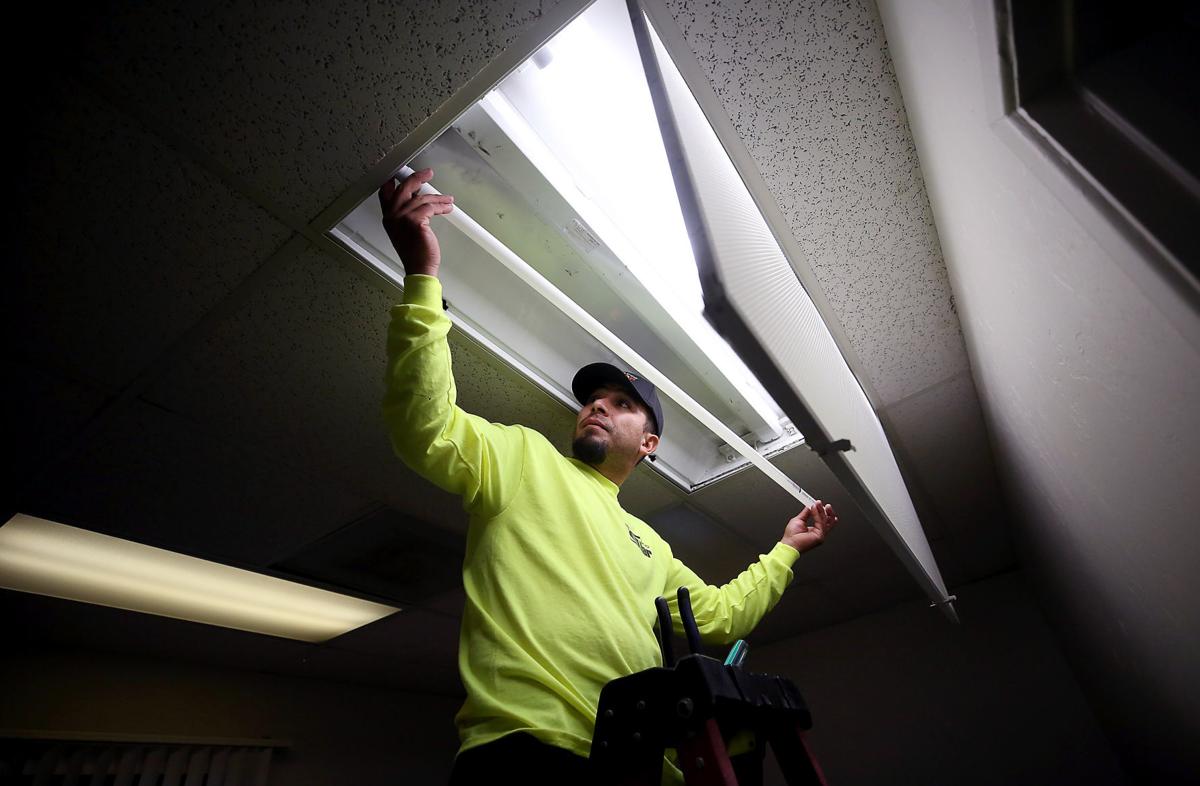 An apprentice electrician with ABCO Solar installs a lightbulb. TEP is proposing no additional spending on energy-efficiency programs. 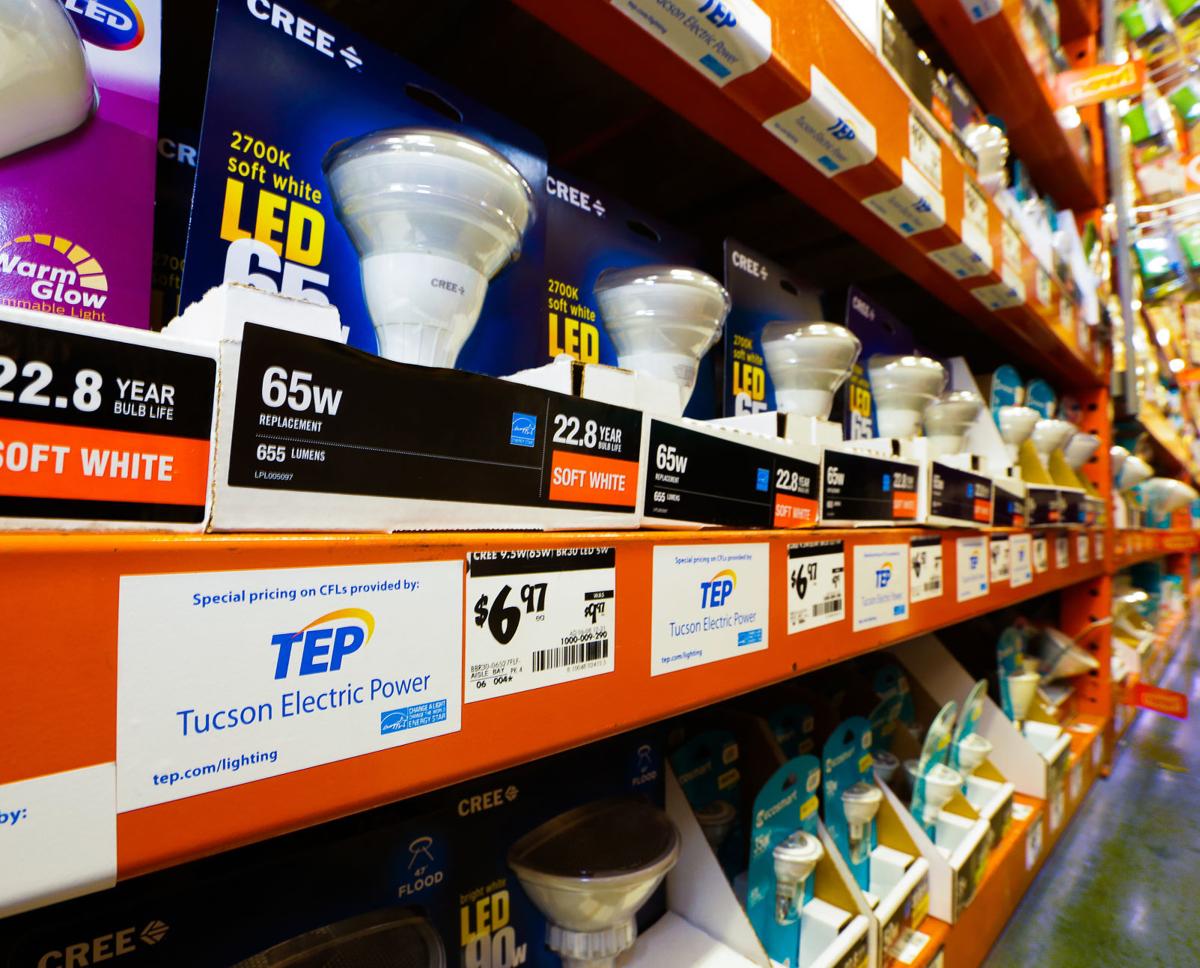 But in its latest plan to meet state-mandated energy efficiency goals, TEP is proposing no additional spending on its energy-efficiency programs.

The utility has proposed cutting back on some programs, while adding new electric-vehicle programs and a pilot load-management program that would let TEP control participating customers’ thermostats or other equipment.

Meanwhile, TEP has proposed an increase in the monthly surcharge that pays for energy-efficiency incentives that would add another $1 a month to the average home customer’s bill, partly to make up for a shortfall in current program funding.

In a proposal the Arizona Corporation Commission is scheduled to consider at its next open meeting on Monday and Tuesday, TEP is proposing an overall budget of $22.9 million for its 2018 energy-efficiency program, which it filed for approval nearly a year ago.

That’s the same as the budget for its 2017 programs, which have continued as funding has allowed while the 2018 program awaited approval.

Among some of the most popular residential programs, TEP is looking to cut incentives for such things as LED lighting products and installation of energy-efficient heating and air conditioning equipment to 50 percent of the customer cost, from 75 percent now.

But energy-efficiency advocates and some local business customers say TEP should be adding funding for its efficiency programs.

Jeff Schlegel, Arizona representative for the Southwest Energy Efficiency Project (SWEEP), said funding for TEP energy-efficiency programs should be increased, noting that overall, such programs save about $2 in costs for every $1 in spending.

“The small amount of collections from utility bills provides a service to customers in that the energy-efficiency resources procured are less expensive than other resources that TEP is buying with ratepayer money,” said Schlegel said.

The Corporation Commission has received scores of comments from groups and ratepayers supporting increased energy-efficiency funding and programs for their money savings as well as for the environmental benefits of limiting the need for new power generation.

Besides SWEEP, energy-efficiency proponents who have submitted comments in TEP’s case include numerous consumers and groups such as Western Resource Advocates, the Tucson Urban League, the League of Conservation Voters’ Chispa program, Primavera Foundation, Environment Arizona and the Arizona Housing Coalition.

Commenters including the Arizona Chapter of Physicians for Social Responsibility and Environment Arizona highlighted the environmental benefits of reduced power plant use from energy efficiency.

TEP’s Barrios said the Corporation Commission’s feedback on the utility’s efficiency programs and budgets will guide its next plan.

Barrios said TEP intends to submit its 2019 energy efficiency plan, which could include additional budget and program changes, within 60 days of approval of its 2018 plan.

TEP’s energy-efficiency programs have grown since the Corporation Commission, following the lead of other states, adopted its energy-efficiency mandate in 2010. The standard requires that state-regulated electric utilities achieve cumulative energy savings equal to at least 22 percent of their retail power sales by 2020.

TEP has met the incremental savings goals in the past but is seeking a waiver in its current proposal because it expects to fall just short of the 2018 requirement that utilities reach 17 percent savings.

All of the programs are on a first-come, first-served basis until the annual budget for each program runs out, and TEP has carried on with its programs as collections continued.

But TEP has suspended some programs in the past when new funding has been delayed, including a seven-month hiatus in funding for commercial efficiency programs last year due to a funding shortfall.

All of TEP’s existing efficiency programs have some funds left as the year winds down, though some are only made available part of the year, Barrios said.

“We just want to get everything lined up, get the appropriate mix of programs that customers need, and the adequate funding to support them,” he said.

SWEEP generally supports TEP’s electric-vehicle plan, which would allow TEP to spend about $2 million to boost EV infrastructure with incentives for home charging systems and support of public chargers.

SWEEP also backs TEP’s proposed new residential load-management pilot program, which among other things would allow TEP to adjust the thermostats of participating customers to help the utility handle demand spikes, in exchange for a small incentive payment.

He noted that the load-management program could also benefit customers by allowing them to better regulate their power usage.

But Schlegel said SWEEP opposes TEP’s plan to pay for the new programs with money shifted from programs earmarked for existing homes and multi-family dwellings.

“Especially for programs that have been underfunded for a year now, it’s not a good thing to take money from the same pot that needs money restored,” said Schlegel. “We should not be robbing Peter to pay Paul.”

Barrios said some changes, including the lower subsidy for LED lightbulbs, reflect market forces and the program’s success.

“The lighting market has changed. LEDs are now much more common and available at lower prices, which allows us to lower incentives (and) lower incentives also allow more customers to participate in programs,” he said.

As part of its plan, TEP is proposing to raise the demand-side management surcharge customers pay to support the efficiency programs.

Commercial customers would see their surcharge, which is based on a percentage of their total bill minus some special charges, rise to 2.83 percent from 1.97 percent currently.

While program costs are covered by the surcharges, TEP also can partly recover any losses from lower power demand linked to energy-efficiency efforts, through a separate surcharge.

In addition, the utility also gets a “performance incentive,” pegged at about $1.6 million for the pending efficiency plan, based on energy saved.

Programs to help TEP manage demand peaks, including one where customers can sign up to have their thermostats adjusted by TEP for an incentive; a “thermal storage” program to automatically precool homes or preheat water, for example, prior to peak demand periods; and battery systems to store energy to boost neighborhood feeder lines that have capacity constraints.

The ACC’s utilities staff has recommended approval of the $1.3 million program and estimated it would take 36 months after approval to launch, after program design including a cost-benefit analysis and contracting.

Revitalization of vacant facilities by promoting the rental of difficult-to-rent commercial properties using an energy assessment to aid with marketing and help owners take advantage of existing rebates; and offering renters an incentive to hire new employees with a $5,000 rebate for up to five new positions.

The ACC staff has recommended against the program, arguing it will build power demand even with efficiency upgrades, and that the budgeted money be allocated to an efficiency program for schools.

Allows TEP to help build out electric vehicle public charging stations at workplaces, apartment complexes, in neighborhoods and on university campuses; gives incentives of up to $500 for EV owners to install home charging equipment and offers a special rate to charge EVs during off-peak hours; supports TEP’s participation in a regional EV plan; supports an electric school bus pilot program; and develops systems to allow TEP to control and manage charging stations.

Tucson economic growth expected to be strong through 2019

But after some of the biggest job gains in decade, the local economy may slow down by 2020, University of Arizona economists say.

Tucson's Pancho Villa statue survives another push to be removed

Conservative group, Judicial Watch, asked for downtown landmark to be taken down on behalf of several residents.

Grocery delivery, with no human drivers, is underway in Arizona

SCOTTSDALE — Deliveries from a grocery store here will soon be arriving with no one behind the wheel.

The conservative public policy think tank asked the Arizona Court of Appeals to reverse a decision saying that the $15 million agreement did not violate the state's gift clause laws.

But the Arizona Corporation Commission didn't get around to voting on a Tucson Electric Power energy-efficiency plan that includes electric vehicle incentives.

Commissioner Bob Burns is trying to probe whether colleagues improperly supported a utility rate increase due to campaign donations.

An apprentice electrician with ABCO Solar installs a lightbulb. TEP is proposing no additional spending on energy-efficiency programs.