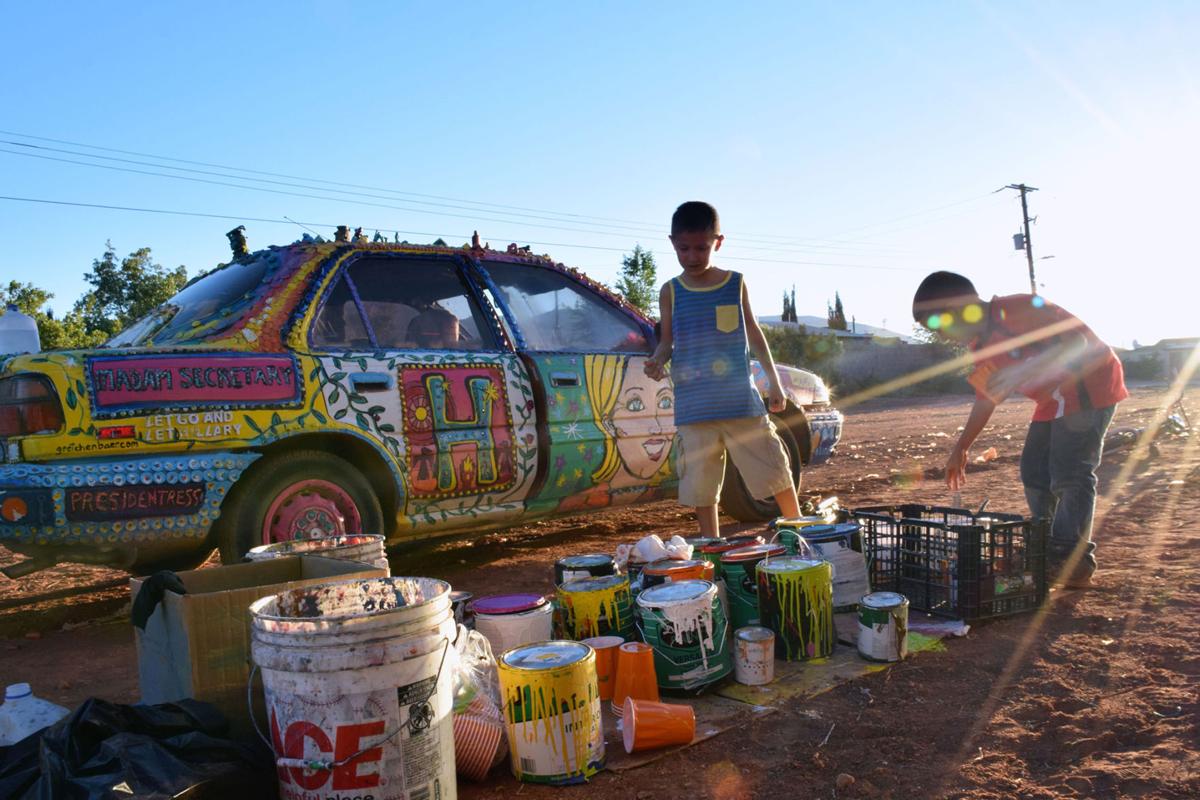 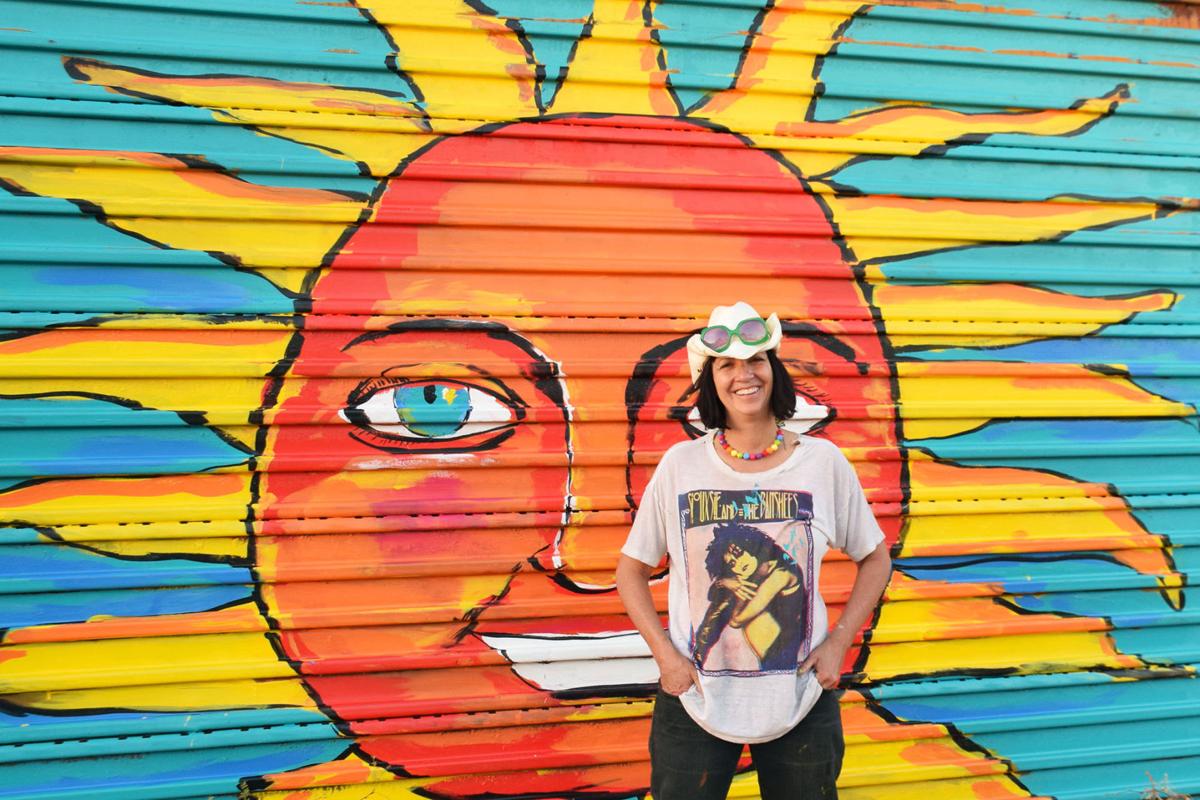 Gretchen Baer in front of a painting on the border fence in Naco, Sonora. 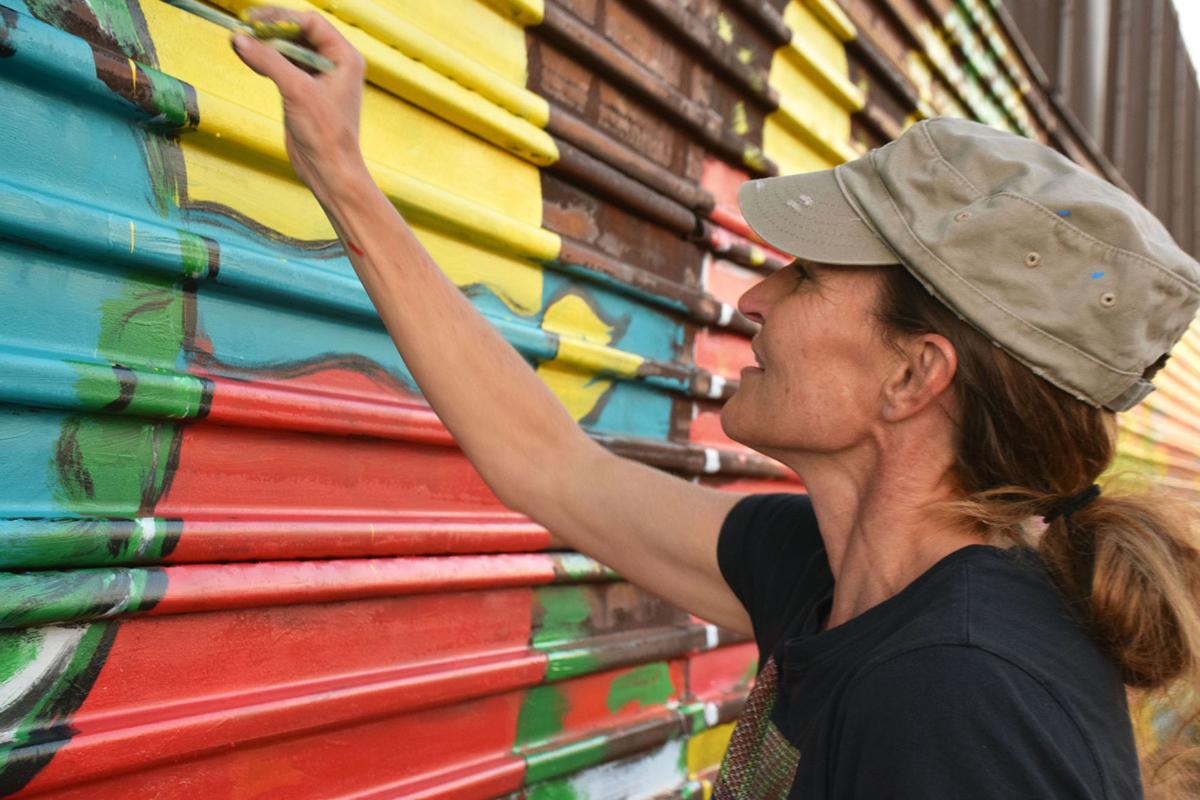 Carolyn Torontos paints on the border fence in Naco, Sonora with the Border Bedazzlers project. 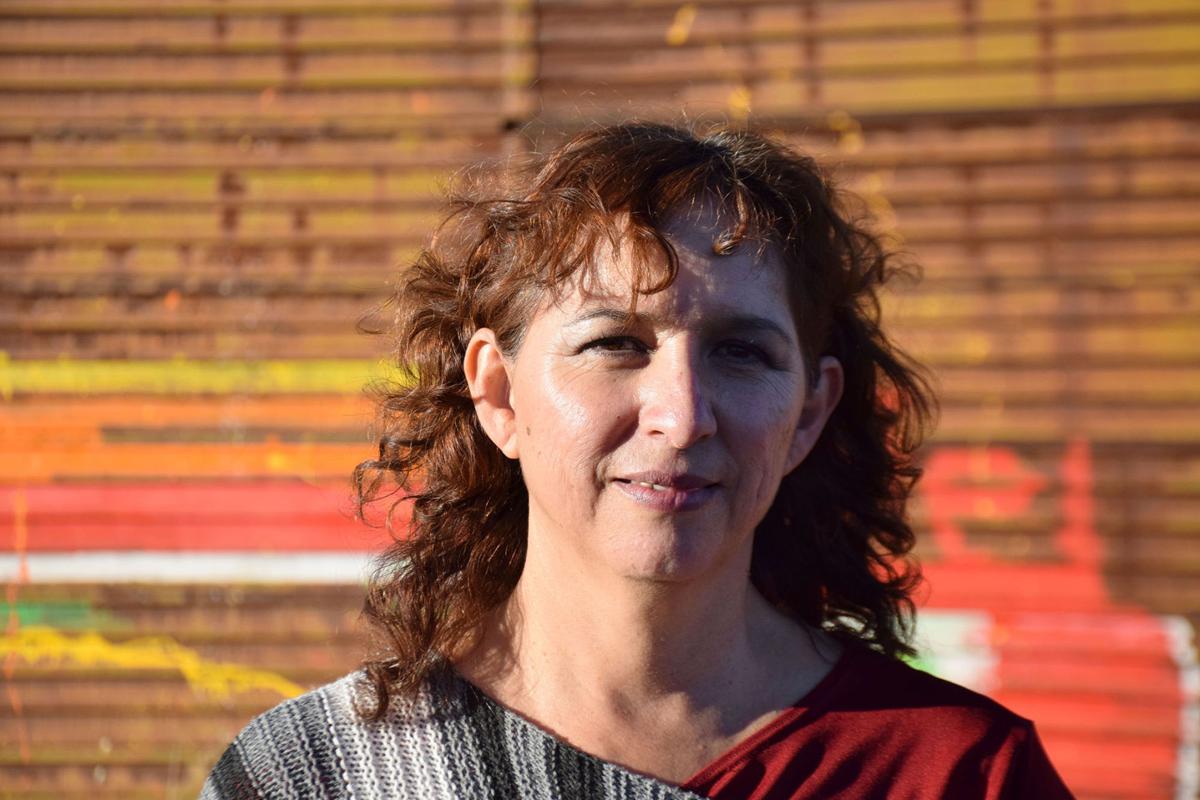 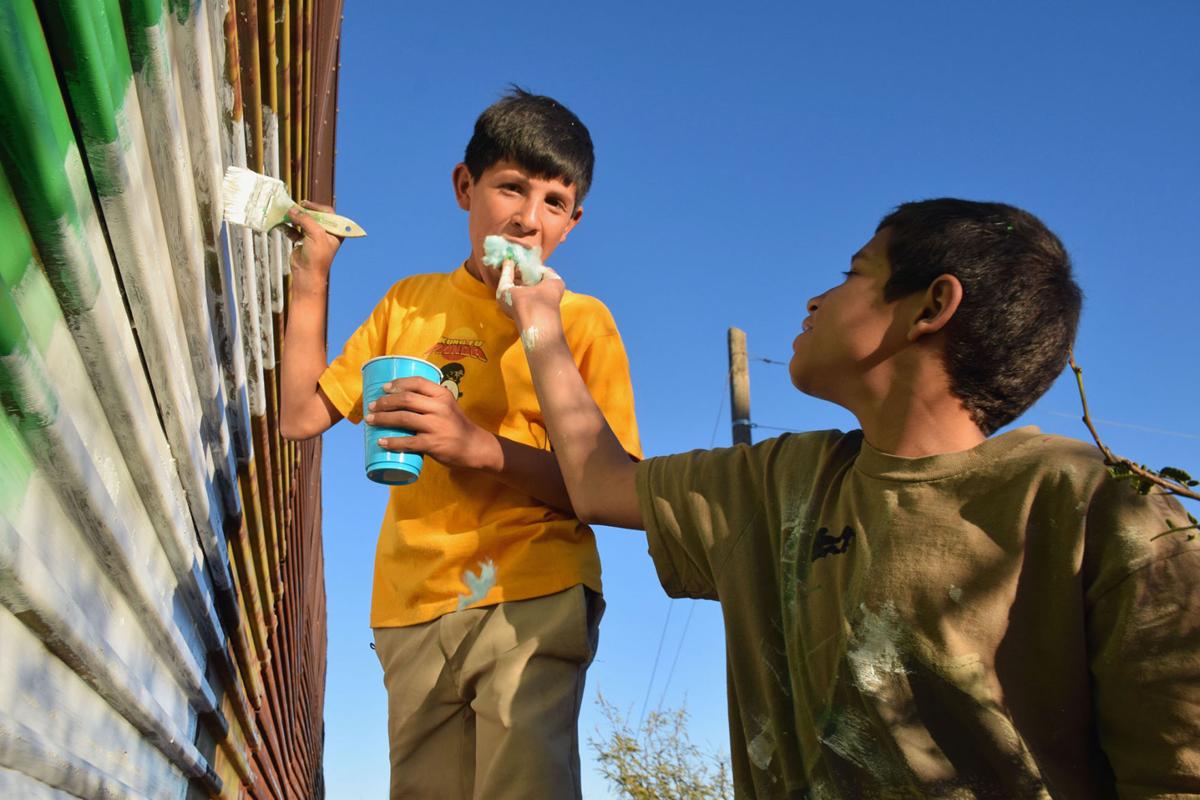 Manuel Garcia, 13, and his cousin Gabriel Corona, 12, eat cotton candy while painting with the Border Bedazzlers in Naco, Sonora. 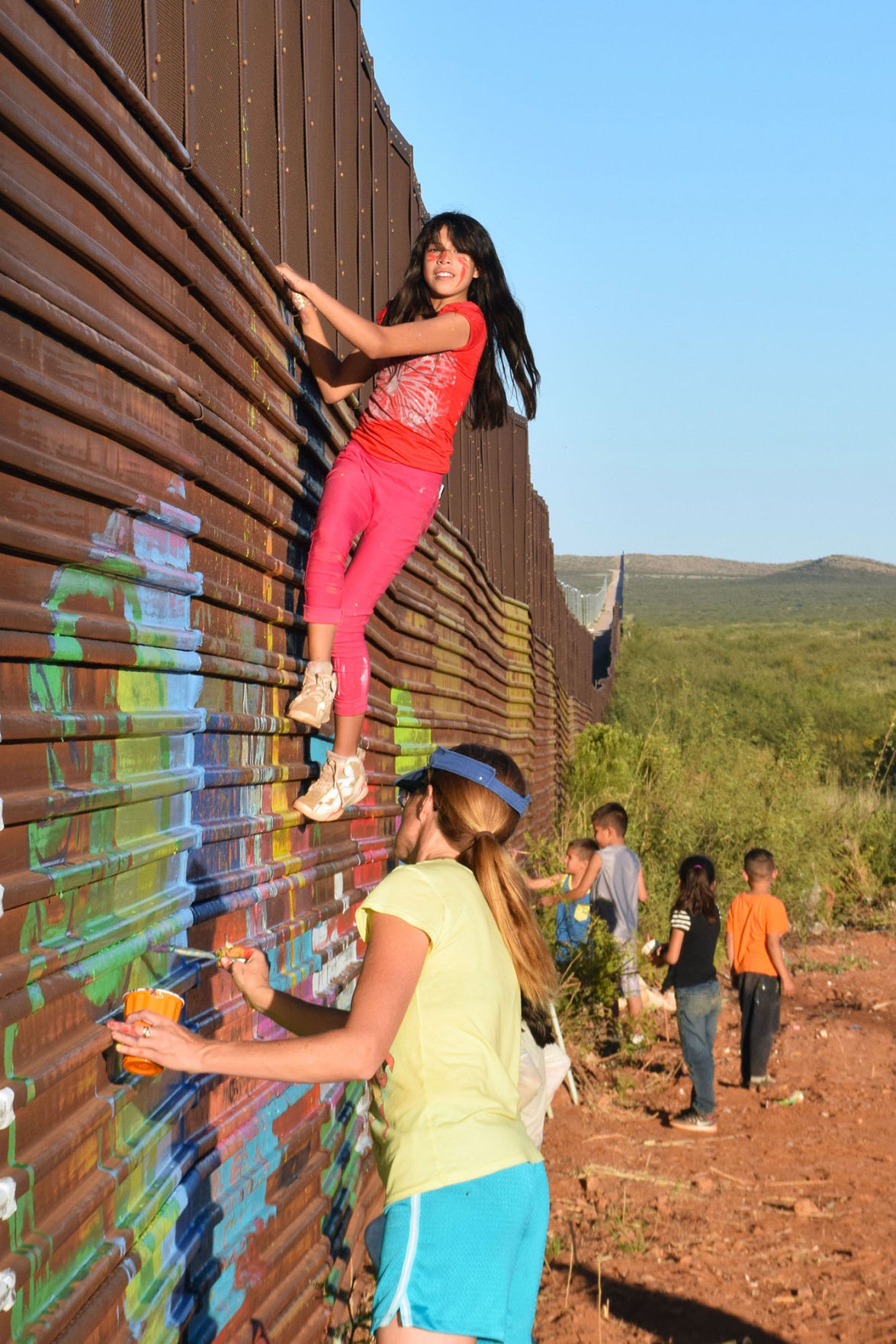 Dulce Flores Corona, 12, climbs on the border fence in Naco, Sonora during an afternoon of painting with the Border Bedazzlers. 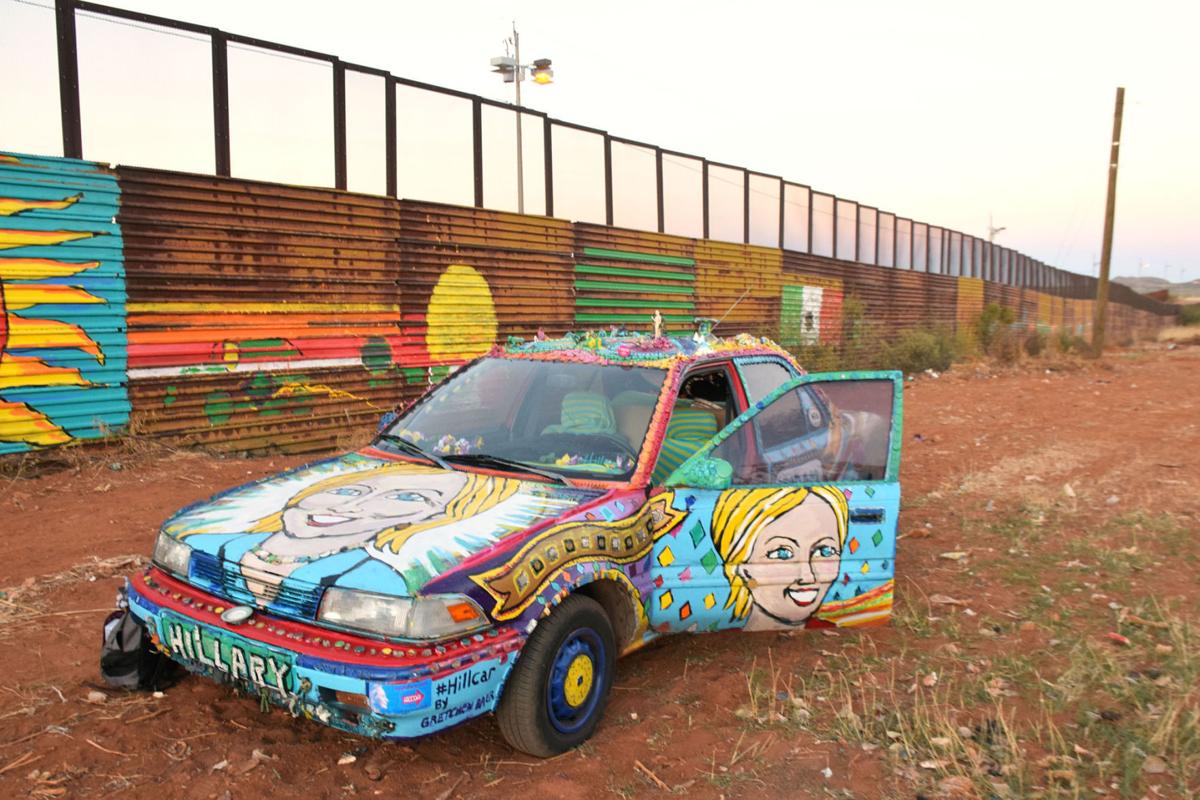 Gretchen Baer’s HillCar in front of the border fence in Naco, Sonora where the Border Bedazzlers have been painting for he past six years.

On a warm Tuesday, nearly a dozen neighborhood kids gather at the border fence in Naco, Sonora.

Holding red and blue Dixie cups filled with paint, the siblings, cousins and friends splash new art onto the rough, 15-foot tall steel panels built with remnants of landing strips left over from the Vietnam War. The youngest ones smear pink, green and black paint into long stripes, while a couple of older girls add meticulous detail to their designs.

A heart, a flag, a giraffe, smiling faces — today’s paintings are the continuation of artwork that covers more than a mile of the rippled metal panels separating this 6,000-person town from its namesake across the border in Arizona. Some crisp and carefully designed, others sweet and simple, each painting is a message of unity between the people on both sides and of defiance to the wall that separates them.

These are the Border Bedazzlers. Founded by Gretchen Baer and Carolyn Torontos in 2010, the informal group is beautifying the wall to counter border narratives that focus on drug trafficking, illegal migration and militarization.

“I know those things happen,” Bear says. “But that’s not what it’s about. Not even close.”

Despite the recent softening of his rhetoric, president-elect Donald Trump’s campaign promise to build a “big, beautiful” border wall makes it crucial for people on both sides of the border to come together, she says.

“I know it transforms the wall for the kids. I know that,” she says. “It’s a horrible, ugly wall one minute, and the next it’s their art.”

Covered in glitter-encrusted figurines, coins, plastic toys and trinkets, the Hillcar is painted with images of a smiling Hillary Clinton alongside messages like “Madame President,” “more art” and “let’s go Hillary.”

Baer decorated her 1989 Toyota Corolla in 2008 in support of Clinton’s first presidential bid.

“I’ve always thought women should rule the world,” she says.

Never having considered herself a political person, she didn’t want to back Clinton in the traditional way. Instead, she created the Hillary Clinton Army and traveled the country in her attention-grabbing art car, self-funding the project from her waitressing wages.

The Hillcar was a hit — even Clinton herself, who Baer met several times, was a fan.

When Clinton lost the nomination in 2008, Baer was disappointed, but also energized and motivated. Touring the country in the Hillcar showed her that people will support art projects and expressions of creativity even if they wouldn’t otherwise get involved in political issues.

Baer headed back to Bisbee determined to keep the momentum going. This time, she set her sights on something in her own backyard — the border wall.

Tucked into the steep hills of the Mule Mountains, the former mining town of Bisbee has transformed itself into a quirky, 5,000-person town beloved by artists and daytrippers alike.

When she happened through in the early 1988 after art school, she stayed.

She held “art envoys” at her Bisbee studio to teach local youth the basics of painting, then hit the streets, creating art to brighten up the community. Eventually she extended the project 10 miles down the road to the tiny border town of Naco, Sonora.

She couldn’t tear down the wall, she figured, but at least she could give it some color and make it more joyful for the people living in its shadow.

“I seem to do things that are activism of a sort,” she says. “I like art of the people. I like getting out there and inspiring other people to pick up a paintbrush too.”

She dubbed the project Border Bedazzlers and made T-shirts with the name inset on a bejeweled Arizona flag. But the idea laid dormant for the next couple of years.

Meanwhile, fellow Bisbee resident Carolyn Torontos was invited to work with a group of youth from Naco, Sonora who were collaborating with U.S. students to paint a mural on the border fence. It had Mexican and American flags side by side with doves lifting the corners, as if opening the wall to a view of the other side.

“It was actually her idea, and then I happened to be doing it,” Torontos laughs. “So we joined forces.”

Working with neighborhood kids, little by little they covered more than a mile of the fence with colorful artwork.

The Border Bedazzlers are an informal bunch, at times with as many as 40 kids or as few as two or three. Sometimes the project takes a months-long hiatus, but during the presidential campaign Baer kicked it into overdrive.

On this late October afternoon, the first Bedazzlers to arrive are two teenage boys. Laying claim to an empty panel, they slap brushes dripping with green, white and red paint onto a section of the fence, forming a large Mexican flag.

“We love Mexico. But we like America, too,” adds Manuel Garcia, 13.

For these kids, painting the border wall is messy and novel, a fun afternoon activity. But it’s also a way to make the fence less of a visual and emotional eyesore, says Maria Elena Borques, a Naco, Sonora historian who has worked with the Border Bedazzlers since the beginning.

“The children understand that it’s a barrier that divides two worlds, two countries. But they know that on this side we are equal as human beings,” she says. “They don’t live in anger. They don’t put up messages of hate. They come happy and content — they paint hearts and suns, and they send a positive message and live an experience that helps them grow.”

Baer recently learned that the murals she and the young painters have worked on for more than half a decade are slated for removal when the current border fence is replaced by a double layer of wire mesh fencing.

“It’s literally coming down any day now,” she says. “There’s nothing I can do to try to save that. So that’s the end of the Border Bedazzlers.”

But it’s not the end of her work in Naco.

In a small, donated building just south of the port of entry, Baer is opening an art center where she’ll work with youth, and maybe adults, to develop their creative potential.

“We move on. We paint different stuff,” she says. “Art doesn’t stop and we’re not stopping.”

The community in Naco has already shown an outpouring of support for the new center, called Studio Mariposa, or butterfly, fitting its humble beginnings, she says.

“I hope it will grow and other artists will come down, too. Why not? It’s one thing that you can do in these times that seem so desperate. This seems like a positive thing.”

Find all the stories and photographs associated with this project, plus video, at http://www.mujeresarteyresistencia.com/

Beyond the wall: Why we don't need Trump's "great great wall"

The border is their canvas for these art activists

Art activists counter divisive, simplistic narratives with their own stories of U.S.-Mexico borderlands and migration.

Gretchen Baer in front of a painting on the border fence in Naco, Sonora.

Carolyn Torontos paints on the border fence in Naco, Sonora with the Border Bedazzlers project.

Manuel Garcia, 13, and his cousin Gabriel Corona, 12, eat cotton candy while painting with the Border Bedazzlers in Naco, Sonora.

Dulce Flores Corona, 12, climbs on the border fence in Naco, Sonora during an afternoon of painting with the Border Bedazzlers.

Gretchen Baer’s HillCar in front of the border fence in Naco, Sonora where the Border Bedazzlers have been painting for he past six years.