Steven Martin of Critter Control of Nothern Arizona opens the cage to release a beaver relocated from Oak Creek near Sedona into its new home on the San Pedro River on April 23, 2021. Courtesy of Ron Stewart

The beaver population on the San Pedro River increased by one Friday with the release of a transplant that was trapped by a pest control company along Oak Creek southwest of Sedona.

Rather than kill the “nuisance animal,” Steven Martin from Critter Control of Northern Arizona worked with the Tucson-based Watershed Management Group to find the beaver a welcoming new home at an educational nature center on the San Pedro near Sierra Vista.

“We were all really excited. It made our week,” Martin said. “You don’t always get a win in this business, so it was nice to have a win.”

Private landowners in the small community of Cornville hired him to get rid of the beaver after trying and failing to keep the animal away from the cottonwood trees on their creek-front property.

“He knew the trees were good eating, and they didn’t appreciate that,” Martin said.

If possible, though, the landowners wanted the beaver to be captured alive and moved someplace else. Martin wanted that, too. He said he felt like it was his duty as a fourth-generation Arizonan — and an NAU-trained wildlife biologist — to find a new home for the animal.

“We don’t have a lot of beavers in Arizona, and they play an important role in the environment,” he said.

Shipek said she reached out to state and federal wildlife officials but was told that the beaver could not be released on public land without an environmental review.

That’s when Shipek turned to naturalist Sandy Anderson, whose nonprofit Gray Hawk Nature Center sits on private property and includes a stretch of the San Pedro River that has hosted beavers in the past.

Anderson was more than happy to welcome the transplant from up north. “Are you kidding me?” she said. “I told them, ‘Bring that beaver to me.’”

The aquatic rodents were once plentiful on the San Pedro, but they were hunted to extinction there in the early 1900s.

Then about 20 years ago, state and federal wildlife officials reintroduced 15 of them to the San Pedro Riparian National Conservation Area in hopes that their dams would help restore the natural ecosystem and create new wetland habitat.

Within a decade, the population grew to more than 100 animals, only to decline again for reasons experts still can’t explain.

Now Watershed Management Group and others are trying to bolster beavers on the San Pedro and other so-called international rivers in the deserts of Arizona and Mexico.

Shipek hopes last week’s beaver release will open the door for similar operations, and not just on private property. The next time a beaver has to be removed from the wild, she said, it would be nice to have a suitable new home already lined up — and pre-approved by wildlife regulators — where the animal can do some good.

“It felt really good that we were able to draw on our contacts and connect the dots on this,” Shipek said.

Martin said it took two weeks to trap the beaver in Oak Creek and about five hours to drive it to its new home. The animal didn’t stick around for long, despite the delicious willow bows Anderson had stocked the place with.

“It was done with people by the time it was released. I think it wanted out of there,” Anderson said. “It went upriver or downriver. There is excellent habitat for several miles in either direction from where it was dumped out.”

If the animal survives, it could soon be joined by someone else from its old neighborhood. Wildlife cameras in the same area where the first beaver was captured have picked up another, smaller one roaming the property in Cornville.

If Martin is called in to trap that one as well, Anderson knows just where he can take it.

“I already told them I’ll take any and all beavers they’ve got,” she said.

As officials were responding to the bear on the utility pole, the Arizona Game and Fish officials cleared a 300-pound bear from Highway 82 between Sonoita and Patagonia after it had been fatally struck.

Some 73,000 gallons of water has been hauled this year to about 60 active catchments across southeast Arizona. 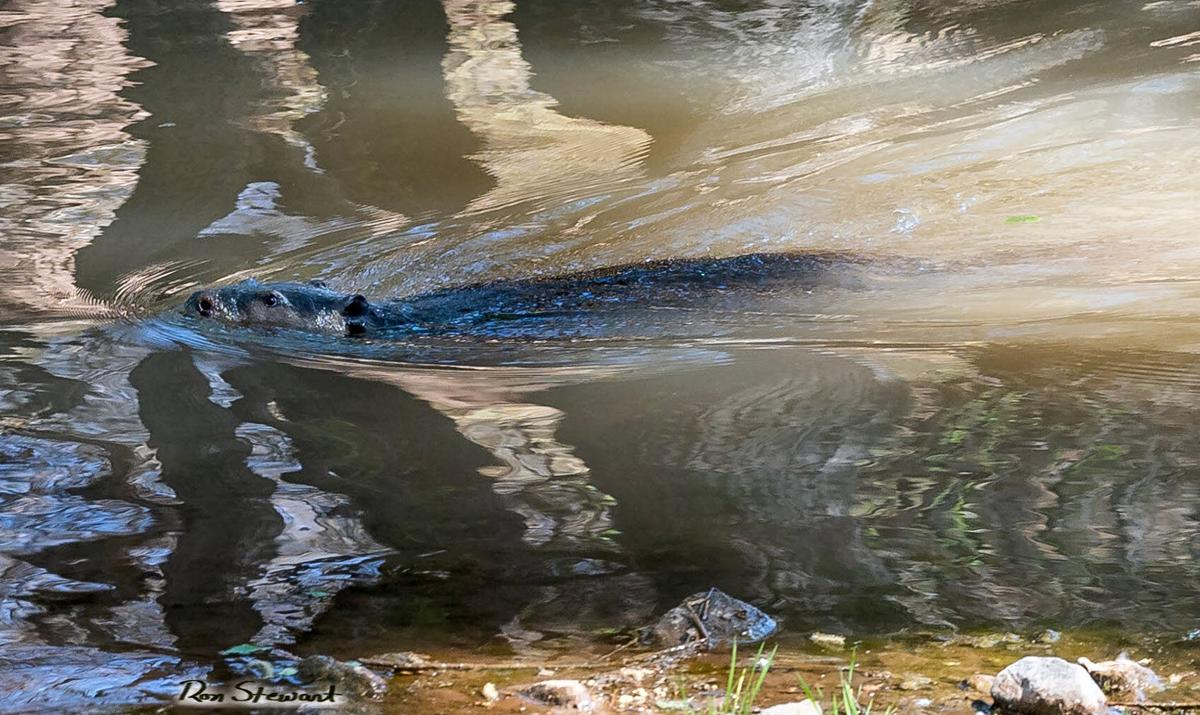 A beaver from Oak Creek near Sedona takes its first swim in the San Pedro River after being released there Friday. 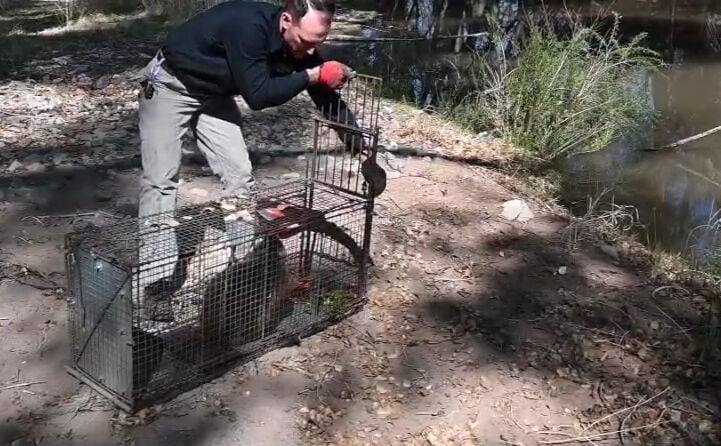 Steven Martin of Critter Control of Northern Arizona opens the cage to release a beaver from Oak Creek into its new home on the San Pedro River on Friday.