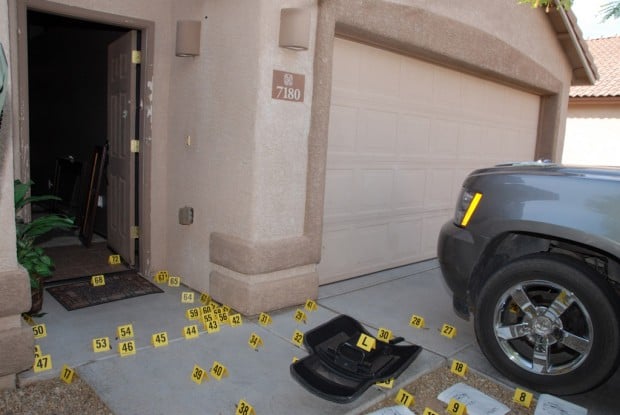 This photo released June 3 by the Pima County Sheriff's Department in June shows evidence markers next to the casings of bullets fired by SWAT officers at Jose Guerena. 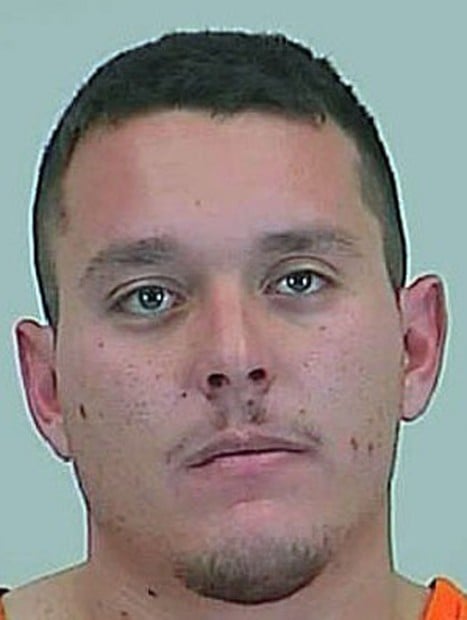 No arrests have been made in the three months since Jose Guerena was killed by a SWAT team during a raid of his home that officials said was part of a complex drug-trafficking investigation involving numerous people.

Stolen cars, drugs, cash and weapons were found in another one of the four houses raided that May 5 morning, but Sheriff Clarence Dupnik said no one has been arrested because an ongoing homicide investigation tied to this case is "much bigger."

"We could go out and make some arrests today, and we could've made some arrests some time ago, but we have two different investigations going on and the homicide is a priority," Dupnik said. "And we don't want to turn off the flow of certain information."

Surveillance at the four homes raided May 5 has stopped. Detectives believe most of the suspects have left the houses and one of the homes is for sale, Dupnik said.

The "much bigger" case is the March 2010 double homicide of Manuel and Cynthia Orozco, he said. Cynthia Orozco was the daughter of Jose Celaya, one of the men whose homes were raided by the SWAT team.

Dupnik said some of the people in the homes were tied to the homicide but he would not specify how.

"This is extremely complicated and we need to be extremely careful about how we deal with certain issues," Dupnik said. "The drug case is very complicated because there are so many people involved."

On May 5 the Pima County Regional SWAT team raided four houses looking for items used in drug trafficking and home invasions, search warrants show. When the SWAT team kicked open the door at Guerena's home, officers said he was at the end of a hallway holding an AR-15 rifle. Five officers fired 71 shots, striking him 22 times, Sheriff's Department records show.

Guerena, 26, did not fire his rifle and died inside his home, reports show. His wife, Vanessa, and their 4-year-old son were inside the house during the raid. Neither was wounded.

A short video released weeks after Guerena's death shows deputies approaching his home turned on their sirens for a few seconds as they approached. It also shows them announcing themselves, then knocking down the front door and firing their guns from outside.

The five officers involved have been cleared of wrongdoing by the Pima County Attorney's Office. Dupnik said no changes have been made to the policy and procedures of how SWAT operates.

No one at the other three homes - all on Tucson's southwest side within five miles of one another - was injured or arrested that May morning, officials have said.

The lead detective in the investigation wrote that during the six months of constant surveillance, none of the suspects was seen handling or even in the proximity of narcotics, but that "these individuals operate a mid-level drug-trafficking organization in the Tucson area."

Celaya owned two of the homes raided, where officers seized a small amount of marijuana, $100,000 in cash, more than 30 cellphones, an AK-47 rifle, lists with names next to dollar amounts, and a stolen vehicle, records show.

Officers did not seize illegal items from Jose Guerena's home, in the 7100 block of South Rewater Drive, records show. Body armor, a rifle, a handgun, and a U.S. Border Patrol hat were found there.

Vanessa Guerena could not be reached for comment Thursday.

A representative from the office of Christopher Scileppi, Vanessa Guerena's lawyer, said Thursday they would not comment on Dupnik's statements. But Scileppi has said in previous interviews that there are plans to file a wrongful-death suit against the department.

For now, Dupnik said, detectives will continue working on the homicide case. It could take thousands more hours' work before any arrests are made, he said.

In this five-minute, 47 second audio file, you'll hear the approach of the Pima County SWAT team to the home of Jose Guerena, the shouted comm…

This is the 911 call made by Vanessa Guerena May 5 when her husband was shot by the Pima County Regional SWAT team.

This photo released June 3 by the Pima County Sheriff's Department in June shows evidence markers next to the casings of bullets fired by SWAT officers at Jose Guerena.