Around 3 a.m. last Wednesday, scientist Ben Wilder watched dozens of saguaros near Pima Canyon explode into flames as he stood in the Catalina Foothills. He had seen flames from the Bighorn Fire shooting down a mountain slope and up the sides of saguaro bodies.

“It was one of the most horrible things I’ve ever seen,” recalled Wilder, director of Tumamoc Hill’s Desert Laboratory.

It will be awhile before an actual saguaro death toll from this blaze is known. But Wilder estimated Friday that the fire took out as many as 2,000 saguaros, from both the front range of the Catalinas and the Pusch Ridge area near Oro Valley.

Some of those saguaros were amidst stands of buffelgrass, an invasive, non-native grass that is known to spread and intensify wildfires to the point where they can burn saguaros that normally don’t burn. But the vast majority, maybe 75%, burned in higher elevation grasslands, above where the buffelgrass has spread rapidly over the past 20 years across the Catalina Foothills, Wilder said.

In short, this was a near-miss for those like Wilder and other scientists who have long feared that the encroachment of buffelgrass into the Sonoran Desert would trigger massive, destructive fires from which native desert plants would never recover.

The buffelgrass lying higher up, directly in the fire’s path, is “still fairly spotty. It wasn’t continuous, wasn’t dense enough to be able to pull that fire all the way down, to make happen what we really fear,” Wilder said.

But he and other scientists remain concerned that if the buffelgrass keeps spreading without more controls, the next big blaze could cause more destruction and filter into the homes lying in the upper reaches of the Catalina Foothills — homes that this time were evacuated for a day and a half.

If the gap between the Catalina’s front range and the homes was like what it had been 20 to 30 years ago, when it was just Sonoran Desert vegetation, “we don’t have as many concerns. The desert doesn’t burn. That’s not the situation. The buffelgrass has come in. And if the area does burn, the desert will not come back but the buffelgrass will,” Wilder said.

“It would kill thousands and thousands of saguaros and palo verdes that would never come back. It would transform the desert scrub into a buffelgrass land.”

The Bighorn Fire was burning last week on the edge of buffelgrass stands that ring the Catalinas’ front range, a map made for the Arizona-Sonora Desert Museum shows. From Sunday through Thursday, the fire crept closer each day to buffelgrass. While it never really invaded the dense buffelgrass stands of the Foothills, it crept to within 300 yards of them at some point.

That’s because the Foothills have plenty of grass to burn. Another map made for the Desert Museum shows that buffelgrass is pervasive on the edges of the Foothills from Pusch Ridge on the west to Pontatoc Ridge east of Finger Rock Canyon .

From there, patches of buffelgrass continue east to Redington Pass, said Aaryn Olsson, who has studied buffelgrass for many years and done aerial buffelgrass mapping for the Desert Museum. The Soldier Canyon area northeast of Tucson is “wall-to-wall buffelgrass,” said Kim Franklin, a Desert Museum research scientist. The area of the Cobblestone subdivision near Campbell Avenue’s north end has the second biggest concentration, said Olsson.

“Everywhere else, it varies from having a few pretty big patches to a lot of big patches and little patches,” said Olsson, who prepared a buffelgrass study about the Catalinas back in 2010. “You can’t walk across the Catalinas from 2,000 to 4,000 feet in elevation and not see buffelgrass.”

“What’s happening is that it’s filling in the desert — it’s infill,” Wilder said. “The buffelgrass is not yet dense enough to carry the fire from the uplands into the desert, but it has exponentially grown.”

One area of disagreement is over how much the buffelgrass presence impacted firefighting authorities’ decision to evacuate 200 homes in the Foothills from midday Thursday to Friday evening, and then to evacuate homes farther north as the blaze moved toward their homes.

“Before buffelgrass, the houses were as close to at zero risk as we have,” Wilder said, adding that the presence of buffelgrass helped make the evacuations essential.

Coronado Forest Supervisor Kerwin Dewberry disagreed. While buffelgrass helped spread the fire, it was not just buffelgrass that took the fire so close to the Foothills.

Wilder, the Desert Museum’s Franklin and Olsson hope this fire will be a wake-up call that prompts more government action to rid the area of the buffelgrass by manually pulling it out or by spraying it with herbicide.

Scientists have been warning of the dangers of buffelgrass invading the desert for many decades. In some places it has sparked fires, including the burning of nearly 200 acres of “A” Mountain in July 2017. Another was the Mercer Fire of August 2019, which scorched dozens of saguaros in 25 acres in the Soldier Canyon area.

But while there have been numerous efforts led by public agencies and nonprofit groups to fight buffelgrass, the spreading continues.

“The extent of the problem at this point requires much more resources than the Forest Service can throw at it,” said the Desert Museum’s Franklin, who said she hopes to come up with a price tag for removing the Catalinas’ buffelgrass by the end of this year.

Controlling buffelgrass is going to be something like road maintenance that we have to do every year, unless we come up with a longer-term effort, Franklin said.

“There has not been the societal or political will to address this threat,” Wilder added. “It’s been expanding at an unchecked rate. There have been a lot of efforts to combat this, but they haven’t met the challenge.”

Coronado National Forest officials treat 1,000 to 2,000 acres of buffelgrass in the Catalinas annually with the herbicide glyphosate, more commonly known as Roundup. Just this past April, the Forest Service treated 405 acres containing buffelgrass in Pima and Finger Rock canyons, Dewberry said, although those areas contained pockets of buffelgrass — not continuous acres of the invasive grass.

“We are going to continue to make the efforts we have in place. We will continue to do that in foreseeable future as we have funding to do so,” Dewberry said.

But he doesn’t know if this fire and other recent blazes will trigger increased buffelgrass eradication, he said. That will depend on priorities in the Forest Service, he said.

Thinning of trees and burning of trees in piles are other priorities that must be addressed, he said. “I don’t want to discount buffelgrass. We agree it intensifies the risk to the Foothills. It aids in spreading the fire more rapidly.”

A beauty salon becomes a refuge for women in Kabul

Bighorn Fire is displacing wildlife, but most can reach safely and re-establish elsewhere

State wildlife official said there have been no confirmed reports of dead animals found in fire. Some wildlife may leave area through established neighborhoods.

One week in, Bighorn Fire continues to rage near Tucson; residents on alert

The Bighorn Fire has burned nearly 9,000 acres. Containment may not come until June 25, agency says.

Don't underestimate the power of the Bighorn Fire, officials plead

“If we come to your door and ask you to evacuate, it’s because it’s absolutely necessary," Pima County Sheriff Mark Napier said, "f you stay there, we may not be able to come back and rescue you.”

The area of Mt. Lemmon and Mt. Bigelow just north of Rose Canyon Lake is now in "set" orders, where residents are urged to voluntarily leave or be prepared to evacuate.

Bighorn Fire update: The fire has grown to 14,675 acres and pushed to the northeast overnight.

On eve of tragic anniversary, Summerhaven residents ordered to evacuate as fire nears

Seventeen years ago this week the Aspen Fire devastated the mountaintop community.

Crews were able to keep fast moving fire out of the village of Summerhaven on Mount Lemmon.

While fire officials say they think the retardant helped them fight the Bighorn blaze near Tucson, a debate is roiling throughout the West over the chemical mixture's effectiveness.

The U.S. Forest Service is reviewing a proposal from the Tucson Rod and Gun Club for a permit to build a shooting range along Redington Pass Road northeast of Tucson.

Pima County now says that 982 homes and businesses along washes are at risk of flooding from Bighorn Fire-induced monsoon runoff, up from 431 homes a week ago.

Scientists have long feared that the encroachment of buffelgrass into the Sonoran Desert would trigger massive, destructive fires from which native desert plants would never recover. 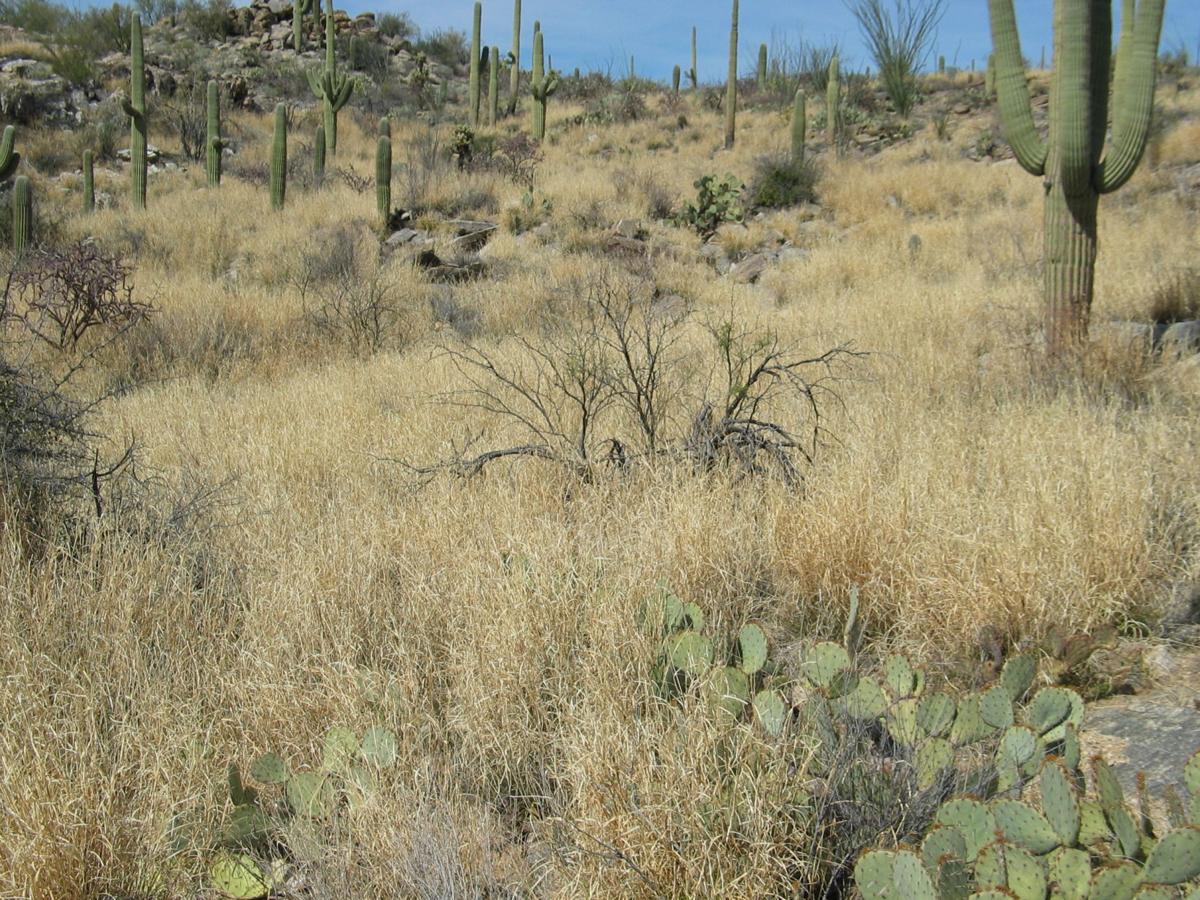 Buffelgrass is an invasive, non-native grass that is known to spread and intensify wildfires to the point where it can burn saguaros that normally don’t burn. Buffelgrass areas in the Foothills have doubled in size every four to seven years.