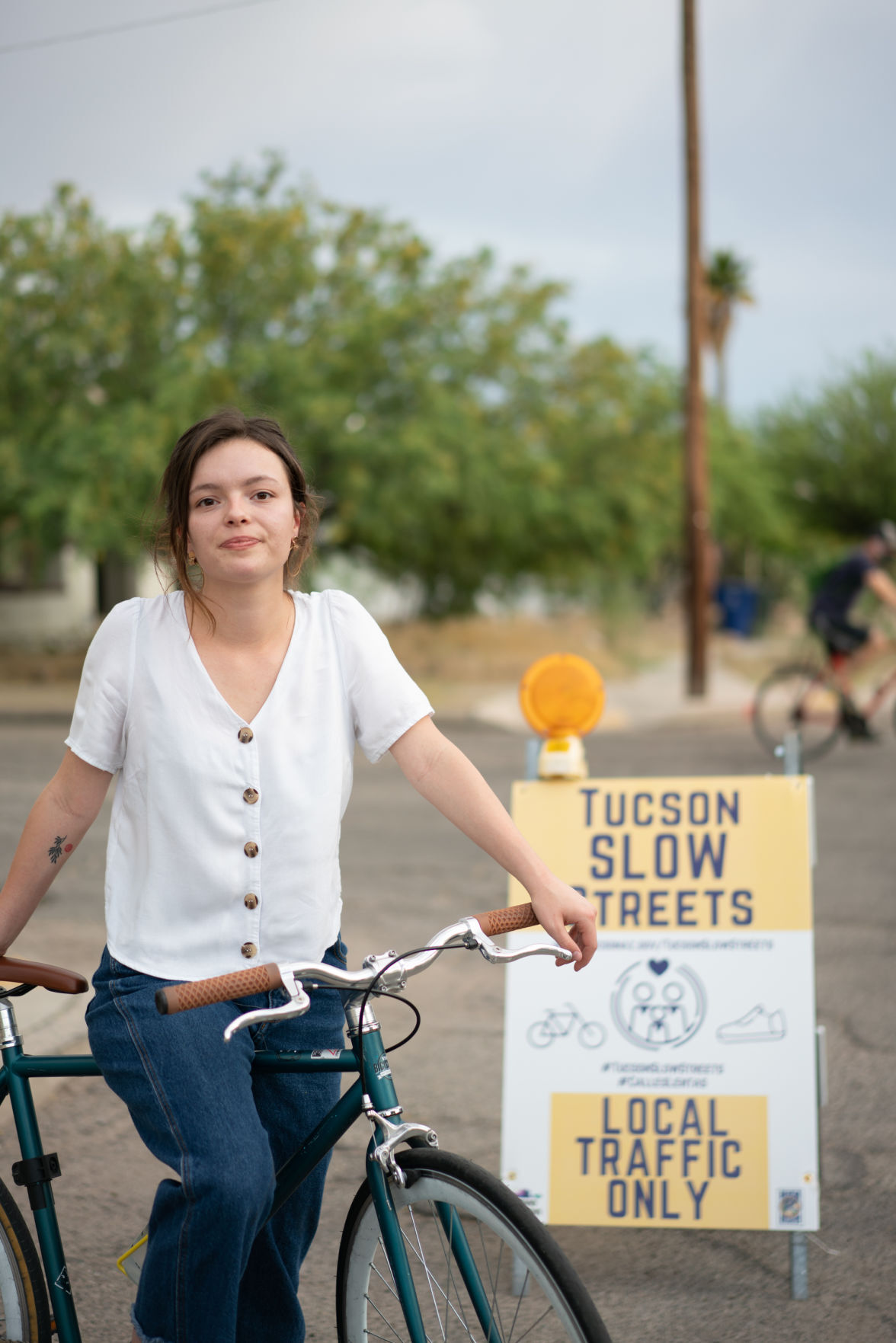 The “Slow Streets” pilot program’s goal is to help residents enjoy the outdoors while attempting to deter drivers from cutting through neighborhood streets. 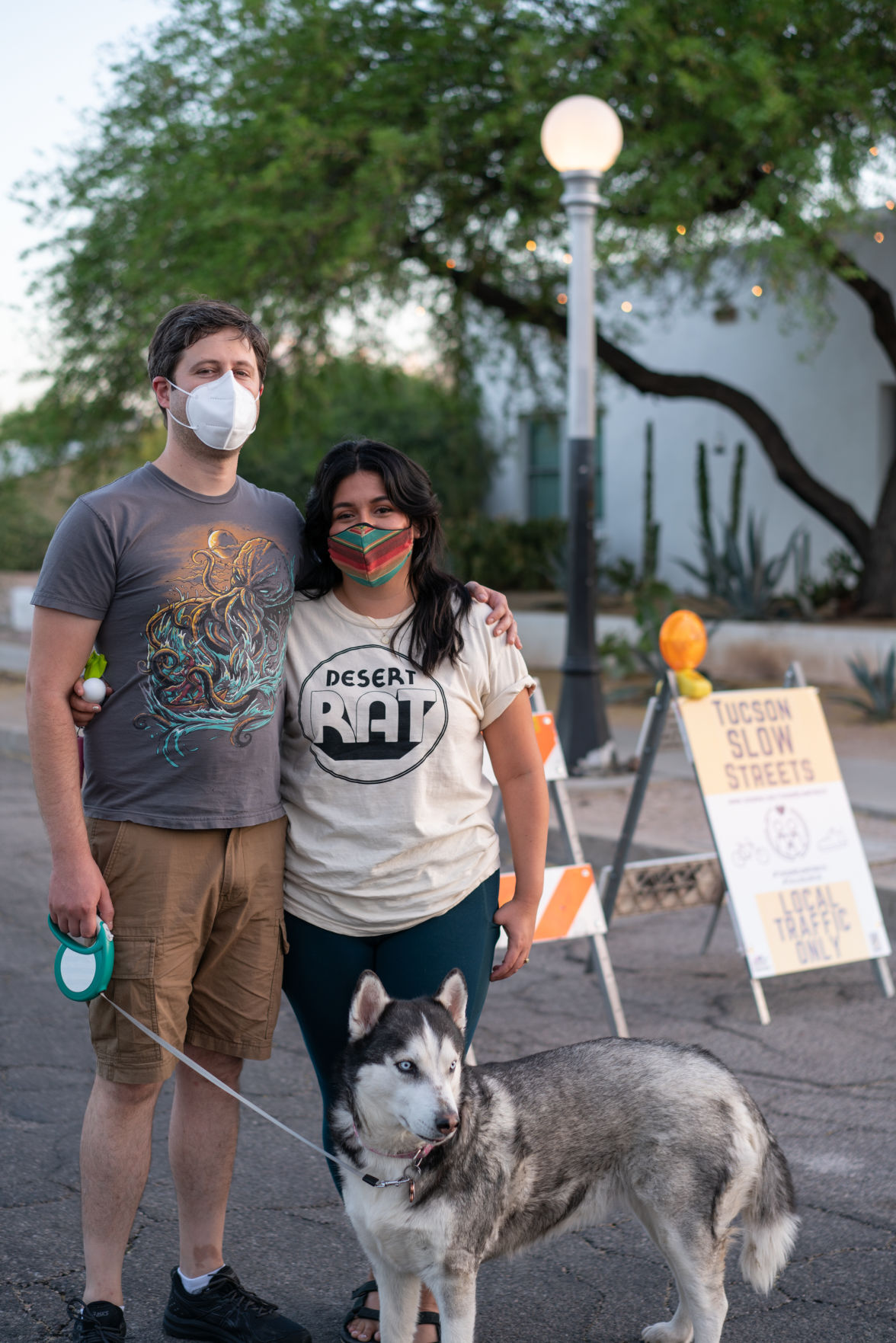 Tucson residents pose near one of the low-cost barriers used to slow traffic to aid neighborhood residents seeking to enjoy the outdoors during the pandemic. 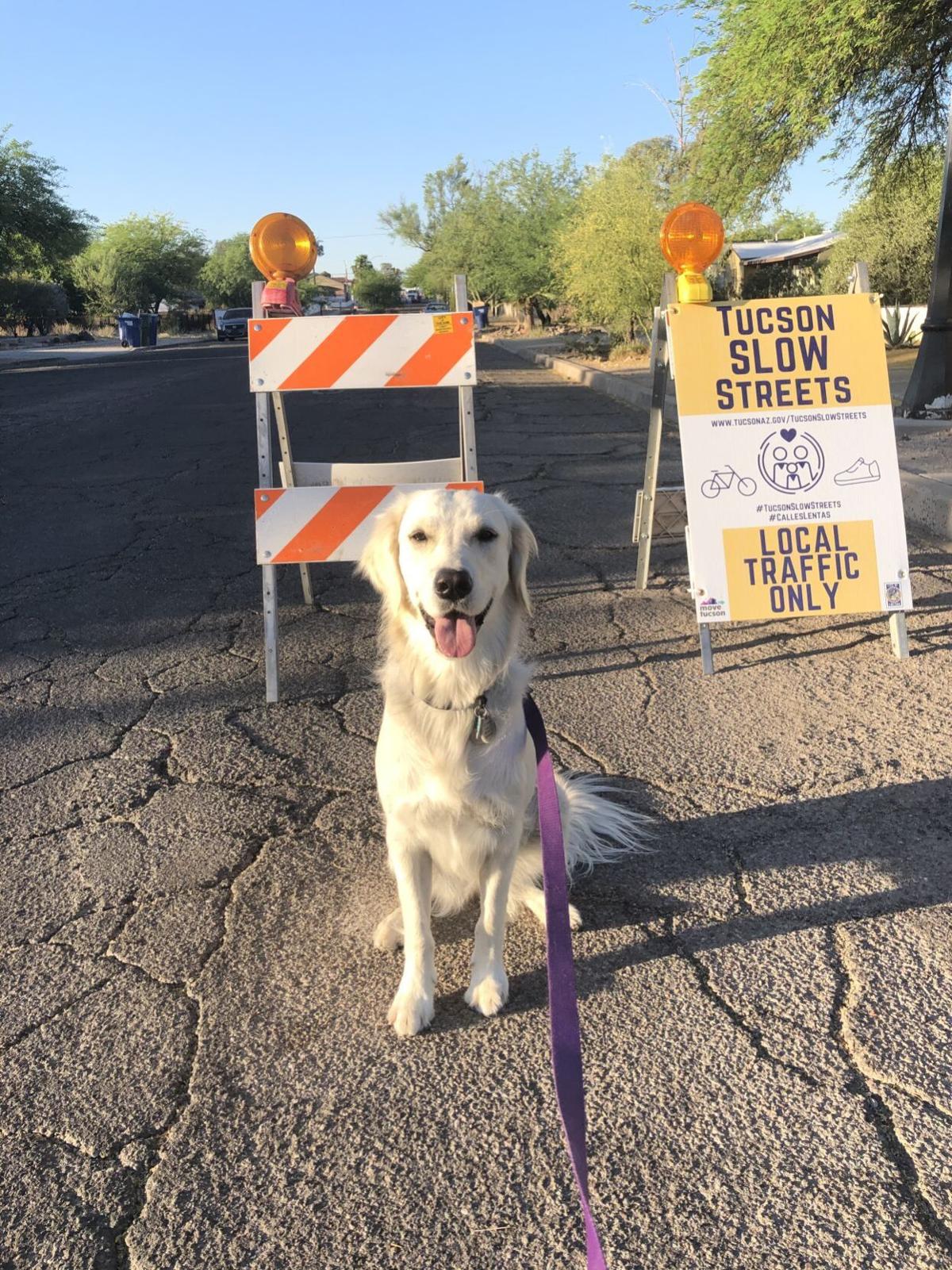 Low-cost barriers will be used to slow traffic to aid neighborhood residents seeking to enjoy the outdoors during the pandemic.

The Tucson Department of Transportation and Mobility says it is aiming to support residents’ well-being during the coronavirus pandemic through a new pilot program for neighborhood streets.

Through the Slow Streets initiative, roads are reconfigured to temporarily limit them to local traffic using barricades, cones and signs to make way for all people to safely spend time outdoors while social distancing.

The department is using the materials in hopes of encouraging drivers to use alternate routes, use caution when driving in the area and to only use designated “slow streets” when necessary to reach a final destination, the department said.

Access for residents, emergency vehicles, environmental services and delivery vehicles are not blocked. The designated streets will not be placed in transit areas or commercial areas.

Between May and June, the department deployed its low-cost materials to the Feldman’s, Barrio Sin Nombre, and Fairgrounds neighborhoods on two-week rotations.

“Working with the neighborhoods we identified low-cost traffic improvements that will now be implemented based on what we learned from the slow streets installation,” said Gabriela Barillas-Longoria, the department’s livability planner. “The pilot phase was really successful. We received positive feedback and interest from the community.”

More than 50 applications had been sent in as of last week to be a part of Phase 2 of the initiative.

The department is looking to complete a minimum of 12 to 15 more street segments by December.

“These (barriers) will be up a little longer, which is good because we know that behavior change takes some time,” she said, noting materials will appear in the neighborhoods for three to four weeks.

Three neighborhoods have been selected: Old Pascua, Miracle Manor and an unnamed area without an association near East 42nd Street and South Prudence.

One of the program’s goals is to prioritize underserved communities hit the hardest by pandemic.

“What we’re doing is recruiting block leaders at each of the slow street locations — once we know where those are — to inform their neighbors and get feedback on the program. They’re going to also help inform the future street improvements,” said Barillas-Longoria, who created the position.

The leaders will receive a stipend as well as a shirt, lawn signs and flyers while assisting with planning, implementation, monitoring and evaluation of the neighborhood project.

Each position is funded through a grant from PeopleForBikes, a national nonprofit bicycling advocacy organization.

In the future, the department hopes to create neighborhood gathering spaces — once it’s safe to do so — and connect them to bike boulevards, which provide a low-stress biking network by using calmer residential streets as alternatives to major thoroughfares.

Barillas-Longoria said after the trial periods, “It’s going to be followed up with constructing temporary, low-cost traffic calming improvements, like traffic circles, chicanes, those kinds of things.”

“It’s going to be whatever the neighborhood wants. It’s really a unique project because oftentimes transportation projects can take years, but beginning to end, it’s going to be about two months per location. They’ll see some really quick improvements,” she said.

The following restrictions are planned each night from 9 p.m. to 5 a.m.:

Drivers should use caution and watch for construction personnel and equipment.

The Tucson Department of Transportation and Mobility has already launched a survey to designate more neighborhoods to be part of the "Slow Streets" pilot program. The site will close on Aug. 7.

To add your neighborhood hood to the list visit tucsonaz.gov/tucsonslowstreets

Road Runner: With warnings in place, onus is on drivers to heed flood risks

Disobeying flood-area warnings while driving not only puts drivers and their passengers at risk, it does the same to rescuers and can strain resources, officials say.

There were 982 fatalities in Arizona, 29 less than 2018, and 16 fewer than 2017, according to the 2019 Motor Vehicle Crash Facts report. Pima County recorded 141 of these deaths, second highest compared Maricopa County.

A new system allows for a “virtually unlimited supply” of letters and numbers that can fit on plates.

A four-lane road taking drivers from the Rattlesnake Bridge to Interstate 10 and bypassing  traffic congestion is part of Downtown Links.

The $950,000 grant award will support development of the 14.5-mile regional corridor, that supporters say could one day spur investment in underserved areas.

Across Pima County, 16,741 cases of coronavirus have now been confirmed, up 86 cases from the day before.

A transportation official says the state's initiative "would absolutely make the rural areas of Arizona a better place to live and do business with more access to high-speed internet.”

“These are groups or individuals that decide to take a step forward and make Arizona a better place,” an official said about the Adopt a Highway program. “They do it because they want to make a difference."

It took almost 30 years, but Tucson transportation officials believe the Downtown Links project will relieve vehicle congestion and provide better connections for all to access the area.

RTA's 35-person Citizens Advisory Committee is moving toward drafting the second plan called RTA Next, which would build on the organization's past 15 years of work.

The “Slow Streets” pilot program’s goal is to help residents enjoy the outdoors while attempting to deter drivers from cutting through neighborhood streets.

Tucson residents pose near one of the low-cost barriers used to slow traffic to aid neighborhood residents seeking to enjoy the outdoors during the pandemic.

Low-cost barriers will be used to slow traffic to aid neighborhood residents seeking to enjoy the outdoors during the pandemic.