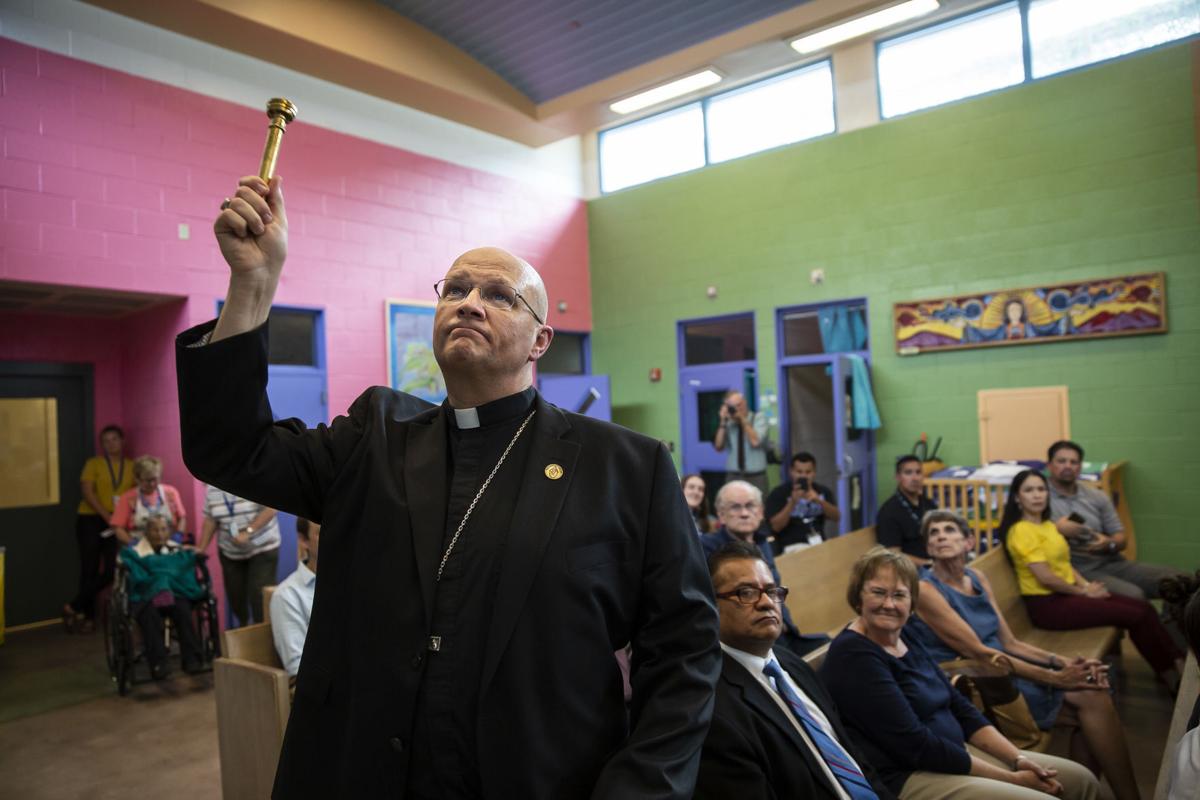 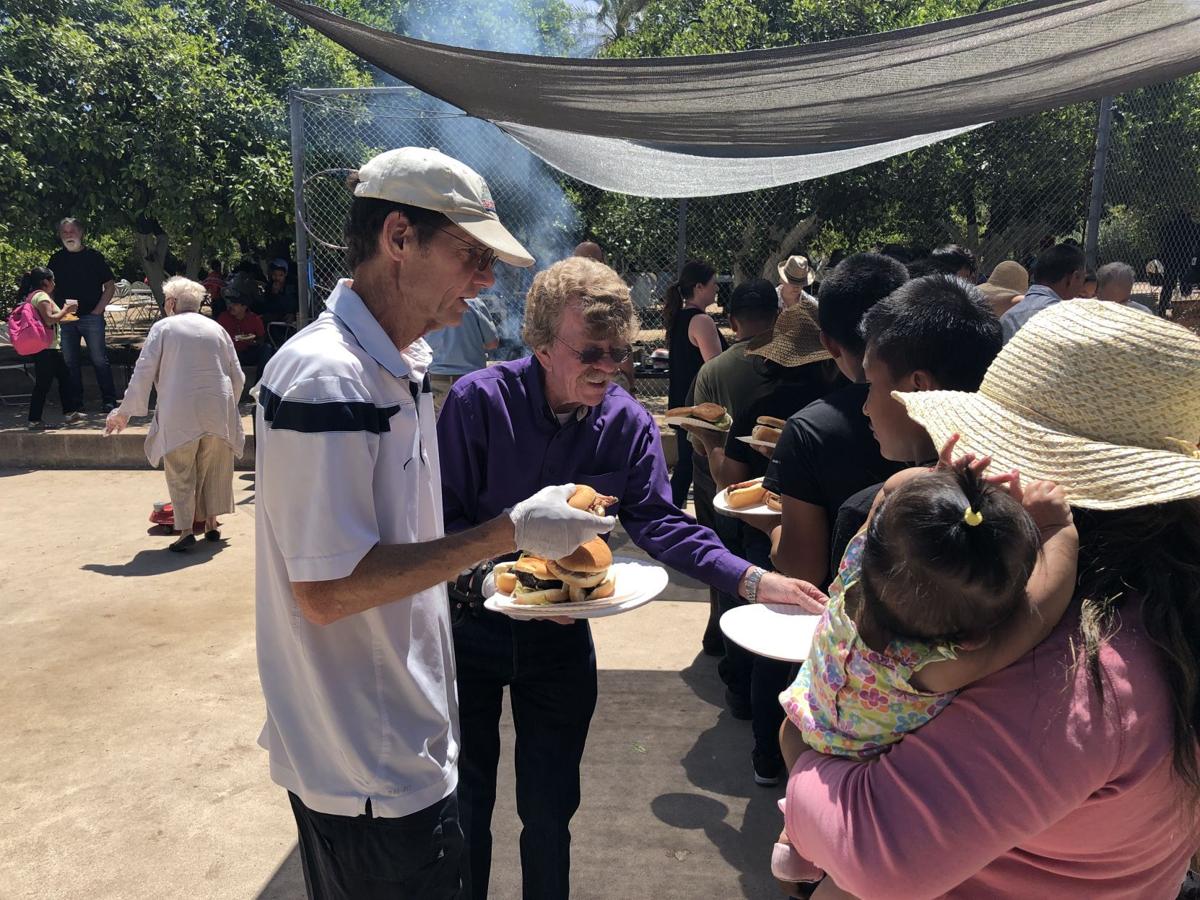 Tucson Councilman Steve Kozachik, left, and other volunteers fed and mingled with Central American refugees during a cookout at the former Benedictine monastery in midtown Tucson in this 2019 file photo.

As President Biden reworks the immigration system at the border, local officials in Tucson, as well as Arizona’s governor and congressional members, are asking for federal help in case those changes lead to large numbers of asylum seekers released in Southern Arizona.

No such increase has occurred yet in Arizona, but officials pointed to the enormous local effort required when thousands of asylum seekers were released by the Border Patrol and cared for by religious groups, hundreds of volunteers, and local governments in Southern Arizona in 2019. The situation this year could be even more complex due to the coronavirus pandemic, officials said.

“In the past, this has led to a local crisis when processing these asylum seekers for emergency shelter and transportation services to their final point of destination in the United States,” Pima County Administrator Chuck Huckelberry wrote in a Feb. 12 memo to the Board of Supervisors.

Federal officials had not contacted the county to develop an emergency shelter plan, Huckelberry wrote, calling the Department of Homeland Security “ill-prepared to handle the issue.”

In 2019, the Tucson community helped more than 20,000 asylum seekers, many of whom were traveling as families, reach their destinations elsewhere in the United States. Those asylum seekers were housed at the former Benedictine Monastery, local churches, and in a converted wing of an unused portion of the juvenile detention center.

The situation changed dramatically in January 2020 when the Trump administration implemented a policy in Nogales, Sonora that forced asylum seekers to wait for months or years on the Mexico side of the border, rather than be released in cities like Tucson.

On Friday, Feb. 19, the Biden administration plans to start processing asylum seekers in that program, known officially as the Migrant Protection Protocols and informally as Remain in Mexico. As many as 25,000 asylum seekers are still in the program along the length of the U.S.-Mexico border. They will be tested for COVID-19 before entering the United States.

Federal officials plan to start processing asylum seekers in Texas and California, but not in Arizona, according to news reports.

“At this time, Tucson Sector is only releasing migrants for humanitarian reasons on a case by case basis,” according to Customs and Border Protection.

A shelter in Southern Mexico, one of the first stops after migrants and asylum seekers cross the border from Guatemala, has already seen twice as many migrants in the past six weeks than in all of 2020, the Associated Press reported Thursday.

CBP officials have been “actively monitoring the irregular migration of persons through Central America and Mexico in coordination with the Department of State and our regional partners for some time,” said a statement from CBP.

“CBP has seen a steady increase in border encounters since April 2020, which, aggravated by COVID-19 restrictions and social distancing guidelines, has caused some facilities to reach maximum safe holding capacity,” it said.

“Per longstanding practice, when long-term holding solutions aren’t possible, some migrants will be processed for removal, provided a Notice to Appear, and released into the U.S. to await a future immigration hearing,” according to CBP.

“We can manage this, but we can’t fund it,” Kozachik said.

He is worried about having sufficient space at local shelters such as the Casa Alitas shelter, which is run by Catholic Community Services and played an integral role in helping asylum seekers in 2019.

“It’s about to become a real mess,” Kozachik said.

Diego Piña, program manager for Casa Alitas, said the number of asylum seekers at the shelter has risen somewhat since the start of the year, but “it’s within our partners’ and our capacity.”

Casa Alitas has provided services continuously through the pandemic and Piña stays in regular contact with local health departments to take care of any medical concerns at the shelter.

“We have a good, firm grasp on how to do this safely,” Piña said.

Gauging how many asylum seekers are in the Migrant Protection Protocols is difficult, said Sara Ritchie, of the Kino Border Initiative, a Catholic group that provides services to migrants and asylum seekers in Nogales, Sonora. But she estimated somewhere between 200 and 400 are in that city.

She said she was “happy” for the asylum seekers who might enter the United States under Biden’s plan, but “very concerned” for those who were denied a hearing in the past year or saw their cases closed because they could not make the arduous trip to El Paso, where asylum seekers in Nogales have their immigration court hearings.

U.S. Rep. Raúl Grijalva, a Democrat whose district includes most of the border in Arizona, asked the DHS to designate federal funds that “can immediately be accessed by non-governmental organizations, counties, and cities that are assisting asylum seeking families at the U.S.-Mexico border.”

Republican Gov. Doug Ducey wrote a letter on Wednesday to the head of DHS.

“My office has heard concerns from law enforcement and border communities that repealing MPP (Migrant Protection Protocols) will result in a significant influx of unvetted individuals into the United States across the national border with Mexico,” Ducey wrote.

He called for the Biden administration to “consider the infrastructure and resources needed to monitor, care for and protect both the incoming individuals and surrounding communities— especially as our country and state are still combating the COVID-19 pandemic.”

Among the questions Ducey asked the head of the DHS was how health-care workers should prepare and whether the administration would fund medical treatment for asylum seekers at hospitals already stretched thin by the pandemic.

He also asked if the administration would commit to quarantining all migrants who test positive for COVID-19 so they will not be released into the community while contagious.

Ducey urged the DHS to coordinate with local law enforcement and asked how those who are released at the border will be “held accountable for attending their court hearings, their actions until those court dates, and the safe transfer to services once the court decides.”

U.S. Sens. Kyrsten Sinema and Mark Kelly, both Arizona Democrats, asked the head of the DHS to “take immediate steps” to ensure the DHS “has sufficient resources in Arizona to keep our communities safe and ensure migrants are treated fairly and humanely,” according to a Feb. 4 letter from the senators.

“Our nation must improve the asylum process and allow eligible migrants to make asylum claims,” the senators wrote. “However, we must also consider the need for an effective COVID-19 response.”

“Releasing migrants without COVID-19 testing will directly affect Arizona communities,” the senators wrote. “If DHS is not able to develop a COVID-19 testing process on its own, an outside contractor or community partner must be brought in to handle the effort.”

The senators pointed to a lack of sufficient bus transportation in 2019, which made it difficult to quickly move migrants to communities where assistance was available.

“If DHS, local governments and stakeholders work together, we believe we can avoid the type of border crisis that occurred in the spring of 2019,” the senators wrote.

Republican Gov. Doug Ducey said Wednesday he wants some answers from Homeland Security on how the decision to again process asylum seekers will affect Arizona.

For Jorge Ibarra, a 48-year-old Cuban asylum seeker in Nogales, Sonora, only a few facts are clear: "If I go back to Cuba, I go to prison." When it comes to navigating the Mexican and U.S. immigration systems, "I don't understand anything," Ibarra said.

For the first time, federal officials in Nogales, Arizona, are using the controversial program known as “Remain in Mexico” to discourage asylu…

SB 1498 would boost the size of the Pima board from five to seven members. Maricopa County's board would go from five to nine seats.

Tucson Councilman Steve Kozachik, left, and other volunteers fed and mingled with Central American refugees during a cookout at the former Benedictine monastery in midtown Tucson in this 2019 file photo.