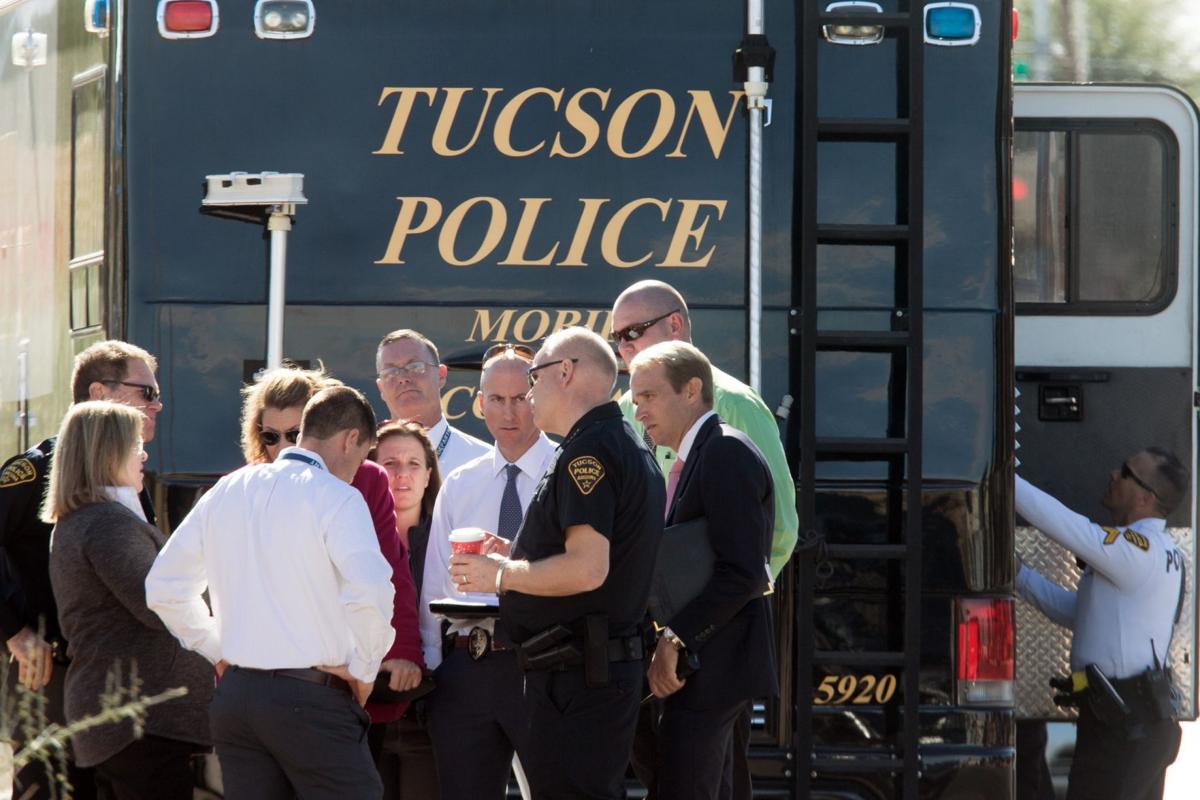 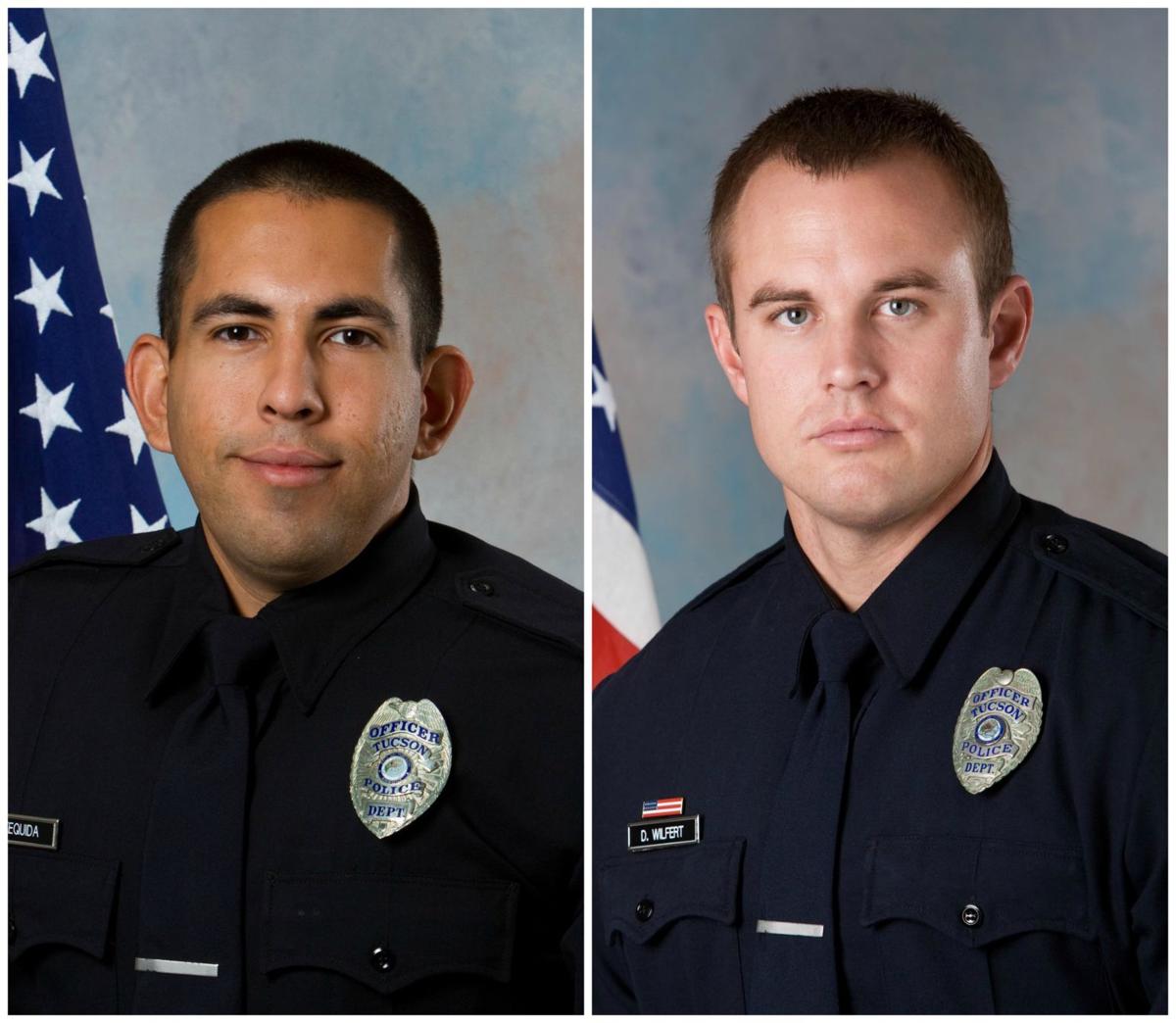 Michael Hunt is pacing the room, looking at the walls, talking agitated nonsense.

“Some mother f---ers who we killed in Afghanistan are here,” he says, listening to voices nobody else can hear. “I keep telling ’em it was just war.”

He’s just acting, playing the role of a Marine returned home from war, suffering from PTSD-induced psychosis. Hunt really is a Marine veteran and member of the Tucson Police Department’s mental-health team. He doesn’t let up on the police officer and dispatcher who are there to learn how to de-escalate a crisis like this.

He won’t talk to the officer, accusing the officer of calling him crazy, and he disrespects the dispatcher by calling her “mouse” due to her high voice. They never succeed in talking him down before TPD colleague Ryder Schlage calls time on the exercise.

“Acknowledge their beliefs, but don’t play along with their delusions,” Schlage instructs them afterward.

Forty-two officers from eight agencies around the Tucson area spent all last week training to talk people down, avoiding the blow-ups that sometimes get civilians and officers hurt or killed.

And then, right in the middle of their exercises, Tucson Officers Jorge Tequida and Doug Wilfert were shot Thursday by an aggravated assault suspect, Jose Barron Gomez, whom they killed. It presented a paradox to Sgt. Jason Winsky, head of TPD’s Mental Health Support Team.

Officers are being taught, he said, to “maintain safety while doing everything you can not to use force.” At the same time, he said, civilians around the country are attacking officers in alarming numbers and for horrifying reasons.

Thursday’s attack was just the latest in a string around Tucson. The night of Oct. 24, a suspect being chased by Tucson police officers turned and fired on them near East 34th Street and South Park Avenue. One bullet grazed the head of an officer. Marcus de la Torre, 33, was arrested and charged with attempted murder.

And on Oct. 28, U.S. Marshal’s Service deputies went to arrest a man at a motel near East Benson Highway and South Palo Verde Road. The man opened fire on the deputies and barricaded himself in a room before surrendering to Pima County sheriff’s deputies hours later. Jack Voris, 45, was charged with seven counts of attempted murder.

And on Nov. 12, Sahuarita police were following a domestic-violence suspect in a car and stopped him with spike strips after about five miles, the department said. When the man, Richard Herrera, 29, stopped, he fired a handgun at least once and pointed it at officers. They shot and killed him.

And early in the morning on Nov. 25, the day after Thanksgiving, a man behaving erratically left the Gospel Rescue Mission shelter and was confronted by South Tucson police who tried to arrest him. As the police explained it, the man struggled with officers, who pepper-sprayed and Tased him, but he freed himself and then charged at them, prompting an officer to shoot. Carlos Valencia, 26, was killed.

The Tucson officer shot in October, Robert Miranda, and Tequida narrowly escaped being killed, Tequida with a nicked artery, and Miranda with a grazed head.

These local incidents occurred amid a national wave of attacks on officers. So far this year, 72 officers have been shot to death nationwide, compared to 43 in all of 2015, according to data compiled by the Officer Down Memorial Page.

I asked Donald De Lucca, president of the International Association of Chiefs of Police, what explains the increase, and he said we don’t know the reasons yet.

“What does shock the conscience is the ambush shootings,” said De Lucca, chief of the Doral, Florida, police. “There have been 20 of them this year.”

These are the cases in which an attacker shot a police officer just because he or she was wearing the uniform, not because officers were called to deal with the person. Think of the Nov. 20 case in San Antonio, in which a man angry over child-custody issues shot an officer sitting in his patrol car. Or the slayings of five officers in Dallas in July by a man angry about police killings of black men.

Here’s how Winsky, who is also a spokesman for the Tucson Police Officers Association, explained the shock of those incidents:

“If an officer goes to a domestic-violence call or a bar fight, there’s an assumed risk,” he said. “What’s really difficult about the ambush-style attacks is that, when an officer is pumping gas, eating pizza or writing a traffic ticket, there’s not that awareness that I’m engaging in an activity that’s life-threatening to me.”

Now, to be clear, American police kill a lot of people every year — more than 1,000 so far this year. Although most are clearly justified, it feels like too many. And some of the killings of police stem from the perceived injustice of those killings by police — sick retribution like the Dallas killings. In July, a Kansas City man ambushed and killed three Baton Rouge, Louisiana, officers because he was angry over a killing by police there.

So, police officers find themselves in a paradoxical situation, represented by what happened this week in Tucson. They need to find better ways of avoiding violence, and they’re working on it, but they’re being put under increasing threat by people who not only fight back when contacted by officers but attack officers randomly.

“The expectation is that we’ll still respond to people in a compassionate way, do everything we can to help people and not use force unless it’s necessary,” Winsky said.

And that was the approach he, the trainers and the trainees took last week at the sessions prepared by Tucson police, the Pima County Sheriff’s Department, the Pima County Attorney’s Office and Cenpatico, the regional behavioral-health authority.

In the second PTSD scenario I observed, two sheriff’s deputies walked into the training room, where Hunt had strewn chairs and was pounding on walls, hearing the voices of the terrorists from Afghanistan again.

Deputies Morgan Zerbe and Marissa Hernandez entered the room, and Zerbe quickly handed off communication to Hernandez, who is a former Marine and made an immediate connection with Hunt.

They’ve never worked together as partners before, but they did so well in talking him down that Hunt eventually agreed to go with them to the Crisis Response Center. After the scenario was done, Schlage had just one critique: That they let Hunt walk behind a temporary barricade in the room where they couldn’t see him — he could have come out shooting.

It’s a tough balance to strike in a time when just wearing the uniform can get you shot.

Steller: Under Trump, journalists must insist on reality

Steller: Transgender cyclist's win in Tucson was fairer than it seemed

When transgender women suppress their testosterone, many athletic advantages go away.

Doctors operated on the lawman's eye but couldn't save it.

Arizona ranks in middle compared to other state's requirements.

Record shows that victims of police shootings during traffic stops are more likely to be black or Hispanic, lawmaker says.