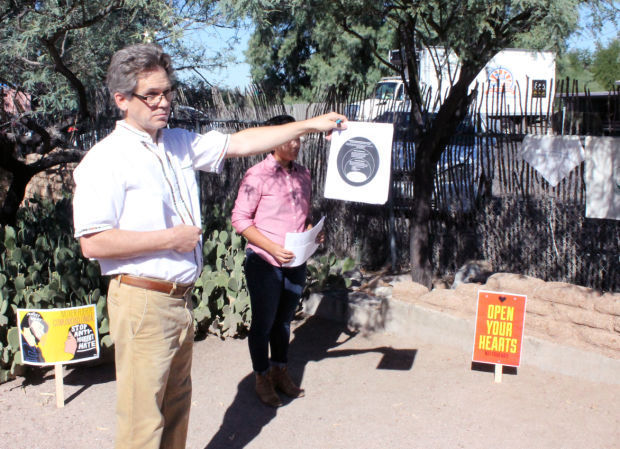 Blake Gentry holds up a copy of the "Deprivation Not Deterrence" report during a news conference at El Tiradito Shrine Wednesday, Oct. 29. The report documents alleged rights abuses suffered by immigrants during short-term detention. 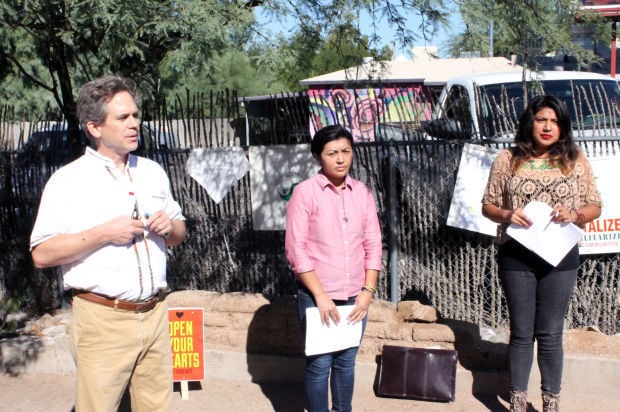 Immigrant families held in short-term custody by Customs and Border Protection this summer, during the height of the surge of Central Americans coming into the country, faced a series of civil-rights violations, according to a report released Wednesday.

“There’s food deprivation, there’s deprivation of water, there are unsanitary conditions and overcrowding in cells — which made children, infants and women sick — and there’s withholding of food and water during interrogation,” said Blake Gentry, board member of the Guatemala Acupuncture and Medical Aid Project, which prepared the report.

“The worst for me, personally, is the system of sleep deprivation. It is not an accident; this is designed,” he said.

Along with poor living conditions, the report found 41 percent of immigrants surveyed were detained for longer than the 72 hours indicated by Department of Homeland Security detention standards. Another 34 percent reported abuse at the hands of CBP personnel.

While Customs and Border Protection said it could not comment directly on the report, in an email statement officials said CBP was committed to ensuring the agency could execute its missions while preserving the human rights and dignity of those they came in contact with, and that all allegations of misconduct are taken seriously.

The report was prepared based on 33 interviews with immigrants granted expedited release between late May and late July of this year. Most had crossed near Douglas.

The group was part of the hundreds of immigrants that were released in Tucson as the government rushed to find a way to process the thousands of immigrants, mostly Central American women traveling with their children and unaccompanied minors, that were crossing through Texas over the summer.

Limited bed space for so-called “family units,” a group made up of at least one parent and child, virtually guaranteed immigrants would be released with a promise to appear before an immigration officer at a later date.

While the government was overwhelmed by the influx of immigrants, Gentry said, the mistreatment of border crossers did not have their origin with the surge.

Although the group stressed the seriousness of the abuses documented in their findings, they also called their results “unremarkable” because they seem to be repeating the same findings as other groups, including Amnesty International, No More Deaths and the Florence Immigrant and Refugee Rights Project.

The group said the Department of Homeland Security holds ultimate responsibility for any abuses, adding that the agency’s focus on fighting terrorism clashes with humane immigration enforcement.

“We have a mission of an institution of the United States that was set up to combat something that those of us who live on the border and experience every day have not seen,” Gentry said.

“On a numbers basis, the state of Minnesota is much more a threat to the United States than what we see in the entire border,” he said, referring to Islamic State recruits coming from the Midwest.

A report on immigrant rights violations produced by the Guatemala Acupuncture and Medical Aid Project.

Blake Gentry holds up a copy of the "Deprivation Not Deterrence" report during a news conference at El Tiradito Shrine Wednesday, Oct. 29. The report documents alleged rights abuses suffered by immigrants during short-term detention.