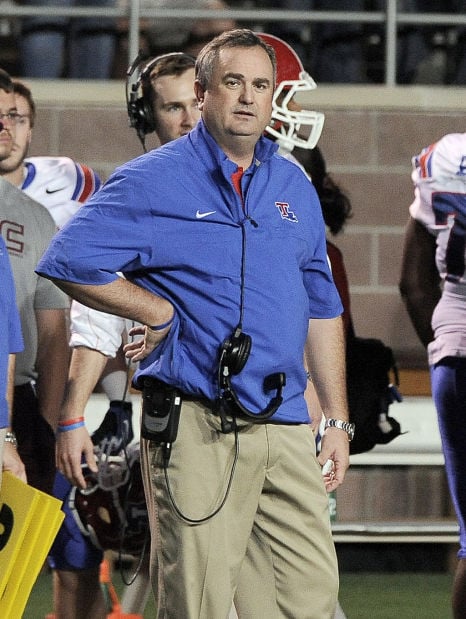 Former UA offensive coordinator Sonny Dykes recently took over as coach at Cal. The Wildcats will face the Golden Bears on Nov. 2. 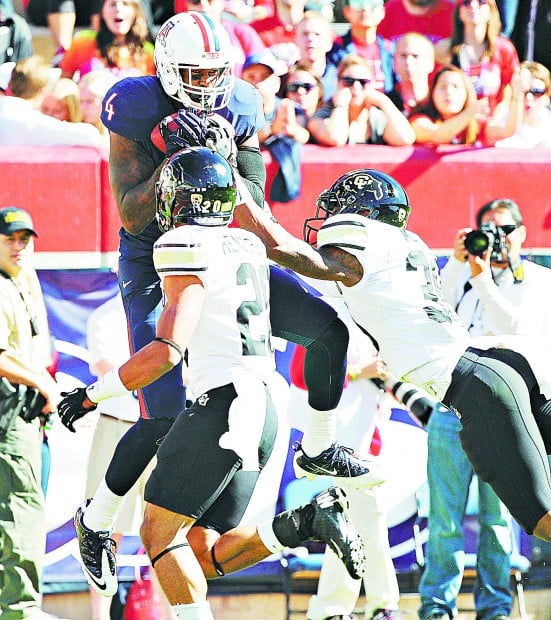 Dan Buckner catches a touchdown pass in the second quarter to put Arizona ahead 28-17. Buckner added a second TD catch in the third quarter.

That is, when they weren't getting yelled at for trying it.

"Coach would said, 'Hey, stop fooling around like that,'" Perkins said.

Saturday, Perkins and Wade actually got away with it in a game. No fooling.

Perkins intercepted quarterback Matt Scott's pass at the goal line, ran 25 yards, then pitched to Wade, who took the ball 75 yards for a touchdown.

Bolstered by the 100-yard interception return, the first of two defensive touchdowns, the Arizona Wildcats' rebuilding defense put on a good show at the annual Spring Game inside Arizona Stadium. A last-second pass from quarterback Matt Scott to walk-on receiver Mike Descisciolo helped the offense escape with a 41-34 win.

The Wildcats' 15th and final practice of the spring was sloppy at times, but - like the rest of spring football - will be forgotten by the time camp starts Aug. 1. Arizona will try to improve on back-to-back 8-5 seasons with newcomers on both sides of the ball and four new co-coordinators.

Saturday's scrimmage showed definite progress, if not a lot of polish.

"Defensively, I thought we made some big plays," Stoops said. "We hadn't made a bunch this spring, but obviously, scoring a few touchdowns defensively was big."

The defense, which must replace seven starters, dominated from the start. Defensive end Ricky Elmore sacked quarterback Nick Foles twice on the first three plays, ending the first-team offense's drive before it could get a first down.

Running a pared-down version of a revamped offense, Foles completed just 7 of 14 passes for 74 yards. He was intercepted twice.

His backup, Scott, fared a bit better. Showing off his new, shorter throwing motion, Scott hit on 16 of 21 passes for 238 yards and two touchdowns.

Scott was intercepted once - and, oddly, it may have been the highlight of the day. Facing first-and-10 in the defense's red zone, Scott threw a laser to receiver David Roberts at the goal line. Safety Anthony Wilcox broke up the pass, tipping it straight into the air.

Perkins, who is fighting for a starting safety job, intercepted the pass and broke toward the west sideline. He pitched to Wade after 25 yards; the Wildcats' star cornerback sprinted down the sidelines untouched. Roberts had a chance to knock Wade out at the 1-yard line, but was derailed by Mike Turner's crushing block. The score gave the defense an 18-9 lead.

"Wilcox made a good play on the ball, tipped it up and I got it," Perkins said.

And about that pitch?

"Me and Trevin have been working on it for two years now. I'm glad we got to pull it out of the woodwork."

Said Wade: "Hopefully next time, we can try it in a game."

Turner gave the defense a 29-20 lead a few minutes later, intercepting Foles' pass and returning it 60 yards for a score.

"We showed spurts of great stuff, but I think we sputtered at times," Foles said.

The game ended on a perfect note.

The Wildcats offense had the ball around midfield when Scott chucked a 54-yard pass intended for Dan Buckner, a hulking transfer from the University of Texas who won't be able to play until 2011. Buckner went up for the pass, only to watch another receiver - the diminutive Descisciolo - snag it. Coaches were so impressed with the walk-on's catch that the game was ended on the spot.

"It happened in a split second," said Descisciolo, a 5-foot-8-inch, 165-pound Tucsonan who prepped at Salpointe Catholic High School. "This proves hard work pays off."

Scott beamed when asked about the final touchdown. Though the "Hail Mary" catch won't count toward the 2010 season, it's a moment Descisciolo will never forget.

"I didn't expect that, but he's a player, too," Scott said. "Everybody on this team can play. Everybody has a role on this team. He came out today - big."

Colin Baxter took a look at the UA's new marketing poster and smiled. "This," he said, "is pretty cool." Baxter is front and center in the UA's new ad campaign, entitled "Game On."

Former UA offensive coordinator Sonny Dykes recently took over as coach at Cal. The Wildcats will face the Golden Bears on Nov. 2.

Dan Buckner catches a touchdown pass in the second quarter to put Arizona ahead 28-17. Buckner added a second TD catch in the third quarter.