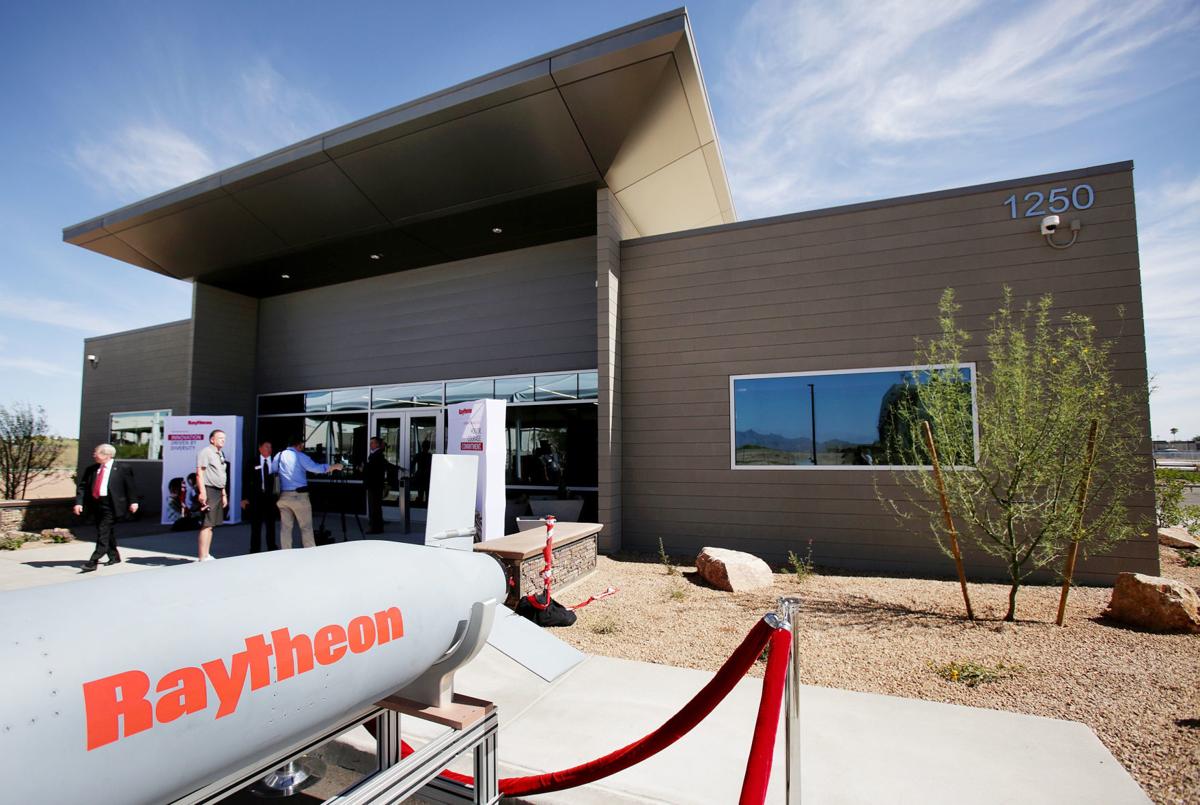 Raytheon has completed one new building at its site near the airport and is planning to build several more. 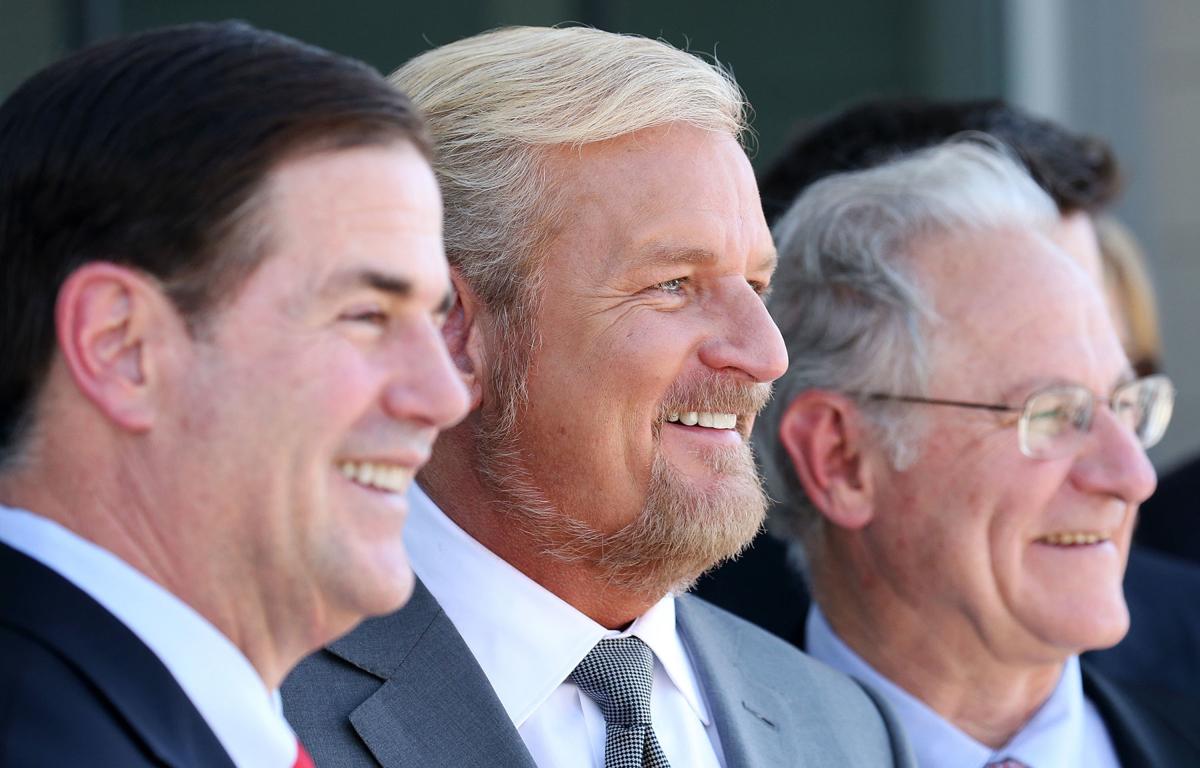 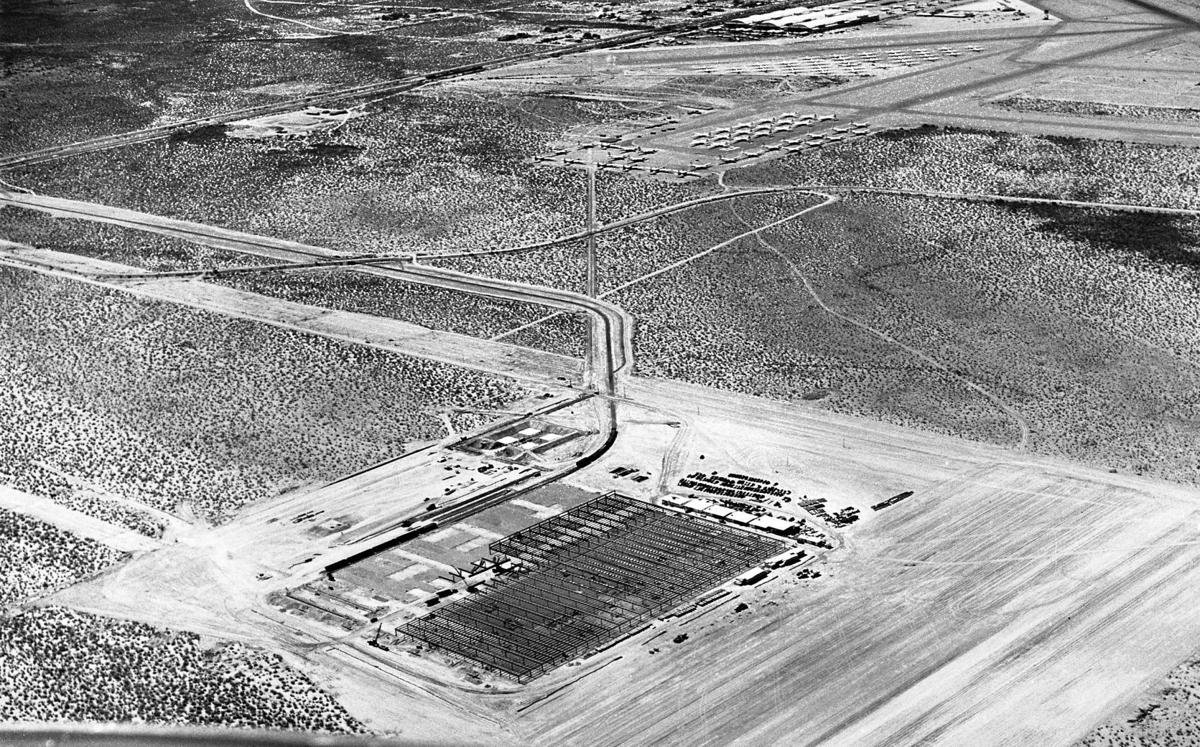 Hughes Aircraft plant under construction south of Tucson in June 1951. Photo taken facing northwest. Building in the center is now known as Building 801. Graded area south of the train tracks is about the location of Hermans Road. It is now Raytheon Missile Systems.

Tucson-based Raytheon Missile Systems has already hired most of the 2,000 new workers it planned in a major expansion at the company’s plant complex near the airport, the company’s chief said Thursday at a dedication ceremony.

“These new facilities will house many of the 2,000 new employees we’ll be hiring over the next few years — we’ve already hired the majority of them,” Raytheon Missile Systems President Taylor Lawrence told a crowd at a ribbon-cutting for the first new building attended by Gov. Doug Ducey and other state and local officials.

Raytheon, Southern Arizona’s largest private employer, now counts about 11,800 employees spread across the airport and several other facilities in the Tucson area, a spokesman said.

As the company christened a new visitor-access center on the north side of its airport complex on Thursday, an advanced test facility and a multipurpose building for research on classified programs are still under construction and expected to be completed later this year.

Those and several other buildings planned for completion by 2020 will mainly house work on classified research and development programs and include laboratories, a high-performance computing center and a massive indoor anti-echo chamber to test missile sensors, Lawrence said.

“This is all about high-performance, next generation missile research and development, and obviously there will be some office space, but as you see there’s not a lot of windows because of all the very, very sensitive R&D we’re doing,” Lawrence said in an interview, noting that the project is the company’s biggest local expansion since the 1980s.

Raytheon, which has benefited from major increases in defense spending, announced in November 2016 it would add 2,000 employees, with average annual salaries of more than $100,000, and spend some $400 million on new buildings and upgrades to expand its complex at Tucson International Airport.

That came after local officials, worried about Raytheon’s future here after the company passed over Tucson to build a new missile plant in Alabama in 2010, coordinated a complex land swap and rerouted a road to give the Raytheon operation more buffer space.

Lawrence said the company considered expanding at Missile Systems plant sites in Texas, Alabama, Kentucky and Arkansas but the airport road relocation and the package of tax incentives offered by the state, county and city helped Tucson win the project.

Raytheon is in line for tens of millions of dollars in incentives if it follows through on its expansion plan, including at least $5 million from the state through an incentive fund, another $6 million in city tax payments set aside to help fund future Raytheon expansion and $16 million in Pima County property tax breaks over a decade.

“Those incentives helped us with the capital infrastructure, and Arizona was the most competitive,” Lawrence said, crediting local officials, Ducey and Sen. John McCain for helping navigate the bureaucratic complexities involved.

The company now expects to invest more than $500 million in the Tucson expansion, and that will push the company’s economic impact even higher, Lawrence said.

“Looking out over the next decade, we are confident that the creation of high-wage jobs and our increased operational output by this expansion will generate billions of dollars in new financial benefit for Arizona,” he said.

Mayor Jonathan Rothschild said local officials worked hard to craft agreements to relocate Hughes Access Road, create a buffer zone south of Raytheon’s plant and expand the tax set asides under an annexation agreement, but it was all worth it.

“We had to negotiate a lot of complicated arrangements with a lot of moving parts,” Rothschild said, adding that the economic impact of the construction alone was worth $230 million.

Ducey said the Raytheon expansion was a major win for Southern Arizona, citing the company’s 500 suppliers across the state.

“The fact that a global industry leader like Raytheon chose Tucson for its expansion is a testament to the city’s growing reputation as a hotbed for innovative businesses and technologies,” the governor said.

Lawrence said the new facilities were not only necessary for expansion but the company’s plans also helped the company win military contracts for new research and development programs, including hypersonic missiles and next-generation, air-launched cruise missiles.

“These are programs that we’ve won, that we’re now going to phase into these building as they’re done next year,” he said. “They were bid into our programs, so one reason we won some of these things is we promised we would have the infrastructure ready to go as these programs ramp up.”

While covering Governor Doug Ducey’s luncheon at the JW Marriott Tucson Starr Pass Resort and Spa on Thursday, Arizona Daily Star reporter Hank Stephenson was detained by hotel security. The detainment occurred after Stephenson briefly spoke with the governor without incident. Security questioned Stephenson for about 10 minutes about his press credentials.

Governor Doug Ducey’s spokesman, Daniel Scarpinato, called the detainment “completely unacceptable,” and said the governor had already stepped away before the incident occurred. Scarpinato said he shared his concerns with the hotel’s head of security, explaining that the governor is an elected official who was attending a public event and that is not how the Governor’s Office does business. “No one should be interrogating the press, it’s the press’ job to interrogate us,” Scarpinato said. Following the event, Ducey made time to speak with the press corps.

The JW Marriott Tucson Starr Pass Resort and Spa did not return the Arizona Daily Star’s calls for comment on Thursday.

Job growth in Tucson expected to rise to an annual 2 percent.

Aide Kelly Sadler was discussing McCain's opposition to Trump's pick for CIA director at a staff meeting on Thursday when she made the comment, sources told the Associated Press.

The decision for a new trial on voluntary and involuntary manslaughter charges was made at a hearing in Tucson’s federal court this morning.

Raytheon teams up with German firm on next-gen fighting vehicle

Raytheon will fit Rheinmetall's Lynx armored vehicle with weapons and electronic systems in a competition to replace the Army's Bradley vehicles.

Raytheon has completed one new building at its site near the airport and is planning to build several more.

Hughes Aircraft plant under construction south of Tucson in June 1951. Photo taken facing northwest. Building in the center is now known as Building 801. Graded area south of the train tracks is about the location of Hermans Road. It is now Raytheon Missile Systems.