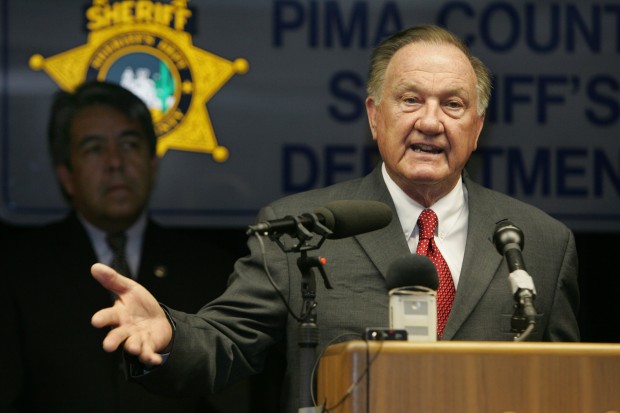 Sheriff Clarence Dupnik, answers questions from reporters during a press conference at the Pima County Sheriff's Dept. headquarters on Sunday.

The semi-automatic pistol used in the shooting rampage in which six people were killed and Rep. Gabrielle Giffords was wounded malfunctioned, investigators said at a news conference today.

Sheriff Clarence Dupnik also said three people, included one of the shooting victims, jumped to action, preventing the attack from being worse.

Although he didn’t identify the heroes, Dupnik said when the shooter ran out of bullets and attempted to load another magazine into the gun, a woman grabbed the magazine and “tore it away from him.”

“She was trying to get the gun away from him,” Dupnik said.

Then as the shooter sought to load yet another magazine into the Glock 9 mm pistol, the spring in the magazine failed. The magazine holds 31 bullets.

At that point two men were able to tear the gun away.

Federal officials expect to file formal charges against Jared L. Loughner by this afternoon, the head of the FBI told reporters today.

The initial charges will focus on those related to the slaying of U.S. Judge John Roll, the shooting of Rep. Gabrielle Giffords as well as the killing of staffer Gabe Zimmerman, said Robert Mueller, director of the FBI.

He said no motive has been determined.

Mueller said Loughner had previous contact with Giffords at a “similar event” in 2007. No details were provided.

Mueller confirmed that Giffords was the target of the attack.

Photo coverage of events and developments on the day after the shooting of Rep. Giffords and the deaths of six people.

The United States Attorney for the District of Arizona, Dennis K. Burke, announced today that his office filed a federal complaint against Jar…

Detectives with the Pima County Sheriff's Department interviewed the "person of interest" in Saturday's mass shooting and cleared him of any wrongdoing.

Study: The asteroid that killed the dinosaurs produced a nearly 3 mile high wave

Study: The asteroid that killed the dinosaurs produced a nearly 3 mile high wave

Watch now: Police respond to shooting on U of A campus

Watch now: Police respond to shooting on U of A campus

Sheriff Clarence Dupnik, answers questions from reporters during a press conference at the Pima County Sheriff's Dept. headquarters on Sunday.