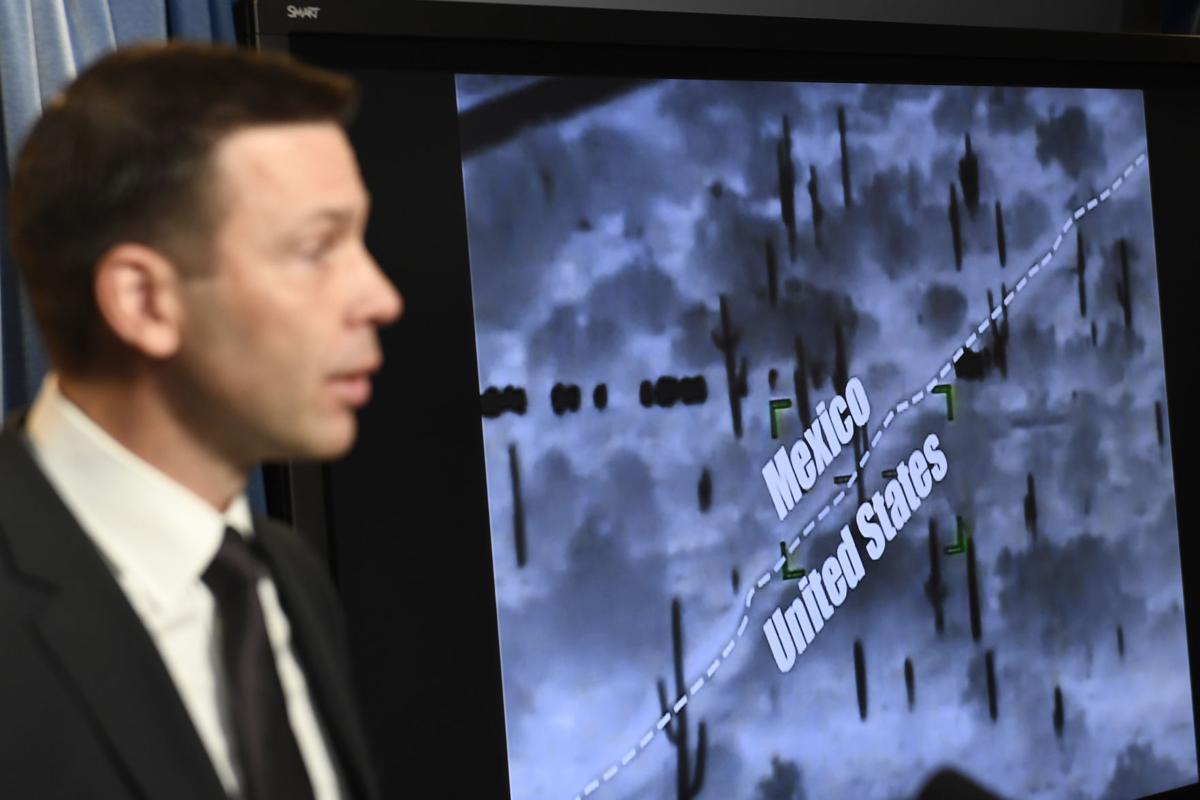 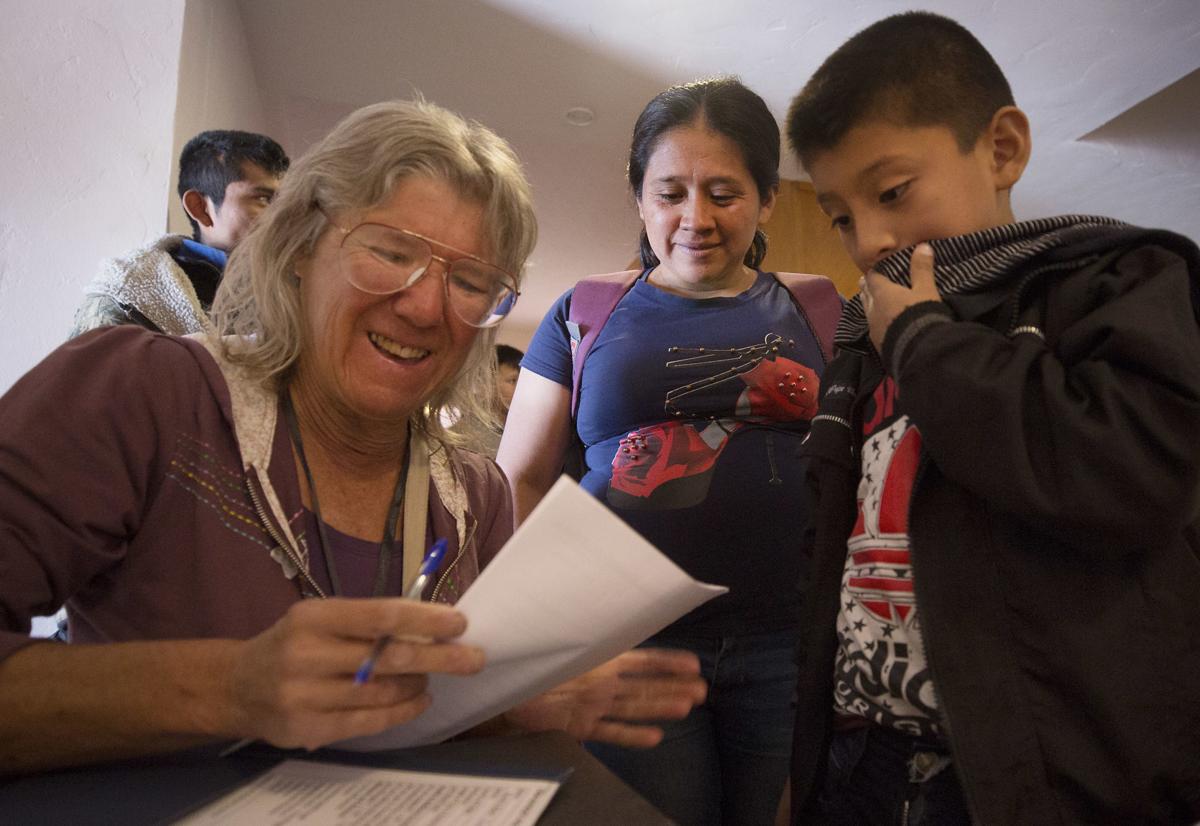 Lauren Asrael, left, checks in Norma Lopez and Yason Hernandez at the Benedictine Monastery after they were dropped off by immigration officers.

That was the tenor of the response last week after U.S. Customs and Border Protection announced a surge in apprehensions at the Mexican border in February, more than we’ve had in any single month since April 2008.

“This is not a manufactured crisis,” Department of Homeland Security Secretary Kirstjen Nielsen said in congressional testimony last week. “This is truly an emergency.”

The truth is, there is a crisis, as Nielsen said. Call it an emergency if you want. But it’s not the same crisis Trump declared an emergency over and promised to address by building border barriers.

“We’re going to confront the national security crisis on our southern border,” Trump said when he announced his emergency declaration in a news conference Feb. 15. He went on, “One of the things I said I have to do and I want to do is border security, because we have tremendous amounts of drugs flowing into our country, much of it coming from the southern border.”

This isn’t the border crisis, or emergency, that February’s data revealed.

It’s not even a border crisis alone so much as an elongated crisis that stretches from Central America to the United States, with occasional eruptions into view at bus stations, at the courts and in migrant shelters, and yes, at the border, among other places.

It’s a migration crisis, among many in the world, as people move away from poverty and danger, and toward safety and opportunity. The UN’s International Organization for Migration reported there were about 244 million international migrants in 2018, or 3.3 percent of the world’s population — not a large percentage, but a huge number.

Last month, there were 76,103 apprehensions by U.S. Customs and Border Protection officers at the Mexican line. The majority were children or parents, most of them from Central America.

I saw dozens of them, and talked to a few, when I swung by the former Benedictine Monastery on North Country Club Road in Tucson Friday morning. Young men were playing games of four-a-side soccer on a concrete court. Little kids were eating the oranges that remain ripe and delicious in the trees that nuns used to maintain on the grounds.

One man told me he had come from Guatemala due to the poverty in his village, where there might be three days of work one week, and none the next week. After a couple of days in the monastery with his daughter, they were headed to Tennessee to stay with family members and await their court date.

These are typical heart-rending stories, but they don’t necessarily justify a granting of asylum.

Still, this is not a problem that a border wall could stop.

As Teresa Cavendish, who runs the shelter for Catholic Community Services, told me, “My own opinion is you can only hold desperation back for so long, before it overcomes any possible risk.”

We know in Southern Arizona that is true.

From 2000 through 2018, the Pima County Medical Examiner’s Office has received the remains of 2,943 border-crossers, Dr. Greg Hess said, mostly people who have died from exposure to the heat. For decades, people have been willing to risk death to make it across.

The big difference now is not an increasing danger from the crossers, as implied by the administration’s focus on national security. It’s the fact that they are coming as families, from Central America more than Mexico, and they are requesting asylum.

This isn’t the national-security emergency the president cited, nor the drug-smuggling problem he named. But it is a crisis nonetheless.

His agencies are, fortunately, viewing the crisis somewhat more broadly and realistically. Last month, Nielsen and security ministers from El Salvador, Honduras and Guatemala signed a compact aimed at fighting human trafficking and organized crime. DHS also is ramping up its “migrant protection protocols,” a controversial effort to make some asylum-seekers from Central America wait in Mexico before they are admitted to make a claim.

But all that treats the issue mostly as a border phenomenon, when it is actually a sprawling dynamic that starts with social and economic problems in Central America, plods across Mexico on foot and in buses, crosses the border into the waiting arms of agents and gets mired in faulty processes in the United States.

You may recall that a couple of weeks ago I visited and wrote about immigration court, one of the most important parts of the process of dealing with asylum-seekers. These judges make the final determination on whether asylum is actually merited, and in about 80 percent of recent cases involving Central Americans, they’ve said no. But there are too few judges and too many asylum-seekers, so the wait is long and growing.

As part of the recent deal under which Congress funded $1.4 billion in border barriers, immigration courts also received $126 million more to add 75 additional immigration judges and raise the total number funded to 524. That would be helpful, as it can take three years before an asylum case is adjudicated. If people’s claims were actually considered in six months to a year, that would serve as a deterrent.

But the most recent numbers show that there are only 414 judges, and Buzzfeed News reported last week that the Executive Office for Immigration Review sent an email to staff informing them the hiring of judges would have to be paused, even as the number of pending cases soars well past 800,000.

It’s a legitimate crisis, maybe even an emergency — most of us can probably agree on that now. But it’s not just at the border, and it won’t be solved by the wall that was the reason for the president’s emergency declaration.

The proposed change to the Tucson charter would define how police can question immigration status — and would inevitably face a legal challenge.

Under the bill, voters could be asked to double the current half-cent sales tax for roads.

Arizona tax credits: Here's what you need to know to file your 2018 Arizona taxes

We answer your questions

2 arrested in robbery, attack of clerk at Mescal store

Motorcyclist killed in wreck on Tucson's SW side

A 28-year-old motorcyclist was killed in a crash Saturday night on Tucson's southwest side, police say.

Lauren Asrael, left, checks in Norma Lopez and Yason Hernandez at the Benedictine Monastery after they were dropped off by immigration officers.